The bride stopped in to check on the ripeness of the figs and saw that the geotech crew had been to the lot. It took them what seemed to be awhile to make hole (I was fixin' to give them a "What's up?" call), but who knows what the standard response time is. And building in Austin seems to be on the uptick lately, so I reckon they have been busier than usual, at least since the banking crisis and subsequent recession. Suggest you put your call in at least four weeks (six weeks?) before you need the info! 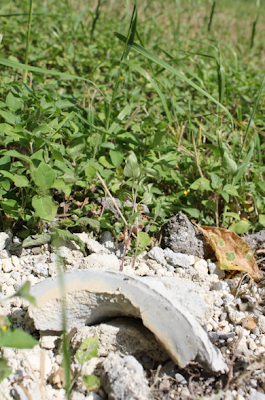 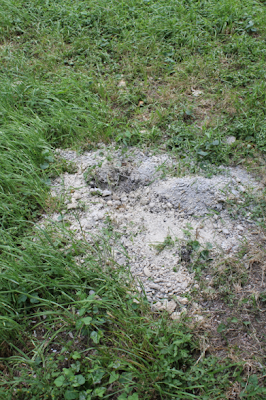 The geotechs wound up drilling two boreholes (no word on whether or not they hit oil or gas [yes, we do have Eagle Ford Shale deepish beneath us! {No, it doesn't produce gas at these relatively shallow depths...}]). I'm guessing they bored no deeper than 6 to 10 feet. I did my dissertation many years ago on the Austin Chalk, which are the rocks beneath our lot. A few feet of clay-rich soil, weathered-tan (oxidized) chalky limestone after that, and then a cool steely blue unweathered chalky limestone after that is what I would expect in these parts (check, check, and check). Once you get past the first few feet of clayey soil, it's a good solid foundation for building. 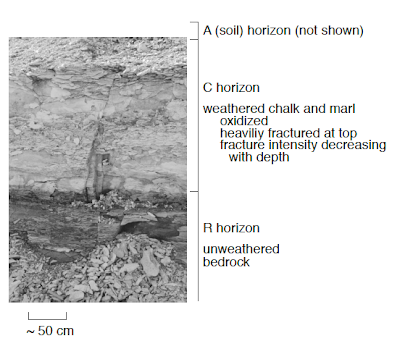 Actual diagram from mwah's dissertation!
(Look ma: I actually used it for something!)

The original quote suggested that they would drill one borehole, but I'm glad they did two. Austin is located amidst the (no worries: long dead!) Balcones Fault Zone (when the Rocky Mountains lifted up out of the Earth, it also lifted this part of the country, causing stuff to sluff off toward the Gulf Coast, greased as it were by deep and malleable salt deposits; we have the Balcones Fault Zone to thank for Mount Bonnell!). Even though the geologic maps didn't suggest any faulting in the area, it's always good to know for sure. Since a foundation can be quite costly if conditions aren't right or the geology itself might dictate the economic placement of the house, I suggest doing geotech early, before the design phase (do as I say, not as I do! [although I checked the geology maps early on {and reviewed a copy of the Green House, Good Life people's geotech survey that they were kind enough to share} and felt pretty good that we would find what has apparently been found {as any good geologist, I carefully inspected the cuttings}]).

Just down the street toward the park there's an old road cut that has an outcrop of the chalk. Soils are probably a little thicker here because we are getting close to Shoal Creek. Yep, that chalk looks pretty dense. 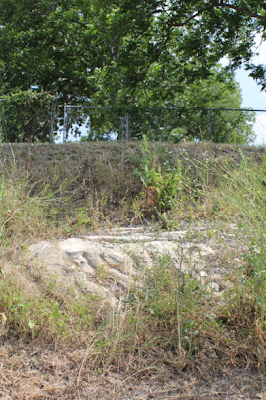 As a geologic aside, these rocks were laid down back in the good ole days when Central Texas was part of a shallow sea. The chalk is made up of the secreted carbonate shells of phytoplankton that slowly drifted to the ocean floor to collect and create a pelagic goo that eventually was deeply buried and slightly cooked to create the rock we know and love (and bore) now. Wished we had bought our lot back then. We could have probably gotten it for a steal!
Posted by bubba of the bubbles at 10:13 AM