The architects also provided us with elevations of the selected parts of the interior, namely the kitchen, bathrooms, living room, and laundry. So let's gawk and gander at the kitchen!

First off, here's the floor plan for reference: 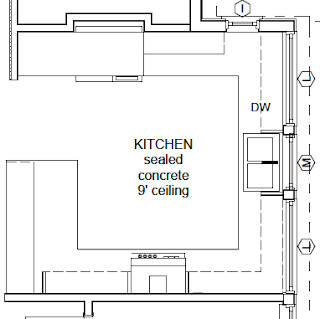 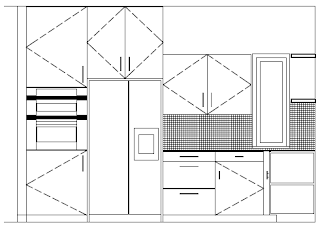 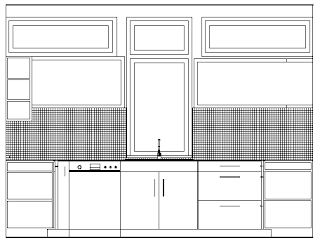 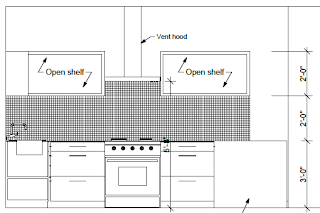 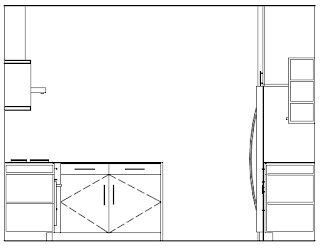 and a couple 3-D images looking generally toward the south: 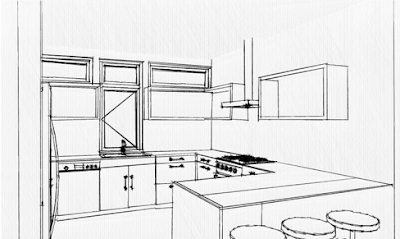 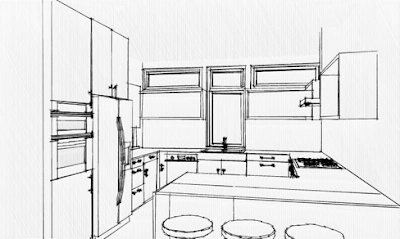 We're digging it and would say that it's about 85 percent there!

No issues with the southern elevation except that we're thinking the shelves should run across the window: 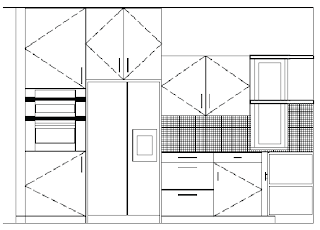 On second thought, maybe that doesn't work so well aesthetically. Will have to think about it... Maybe at the very least the top shelf connects. hmmm....  Note that the architects moved the windows to up high. Nice.

Looking west: The architects show a slide-in range-oven; however, we plan on just having a range here with the oven on the eastern wall (a friend at work said "You need two ovens!" but with the New Mexican bread oven in the yard, we'll be fine). This'll create more under-counter storage.

We asked for open shelves instead of upper cabs for part of the kitchen but weren't expecting nearly all the uppers to be open shelves. But we really like how the architects "curved" the shelf around the corner between the southern and western walls. Perhaps the open shelf to the right of the range should have a door.

We'll need to chat with the architects about the range we want: 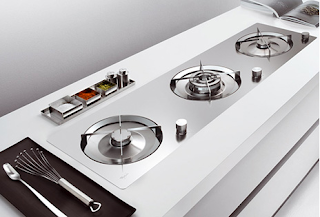 Furthermore, I think we found the range hood we want:

Can you say "Minimal."? It's rather perfect, really, mimicking the shape of the range and being minimal and white. As an added bonus, it costs about 40 percent less than the others we were flirting with. So the kitchen will need to accommodate these items.

Looking north, we may want the cabinets to accommodate pull out trash/recycling areas. Not sure where the trash goes in this here chuckwagon!

Counter height is something else to consider. Standard height is 36 inches. Robert Rasbach suggests a wee bit higher at 37 inches.

Having a wee bit of debate on the length of the toe kick. Robert Rasbach suggests a minimum of 6 inches, but three seems to work. We just saw the counters in the public area of our apartment building, and they have what appears to be 6 inches with the kick plate the same color as the concrete floor. It is sweet. May need to go with 6-inchers.
Posted by bubba of the bubbles at 7:23 PM