burgers (with a side of architecture)

Below is an article I wrote for the neighborhood newsletter that they recently published. They changed the title to "Of Burgers and Burgertecture" for some reason. Enjoy! 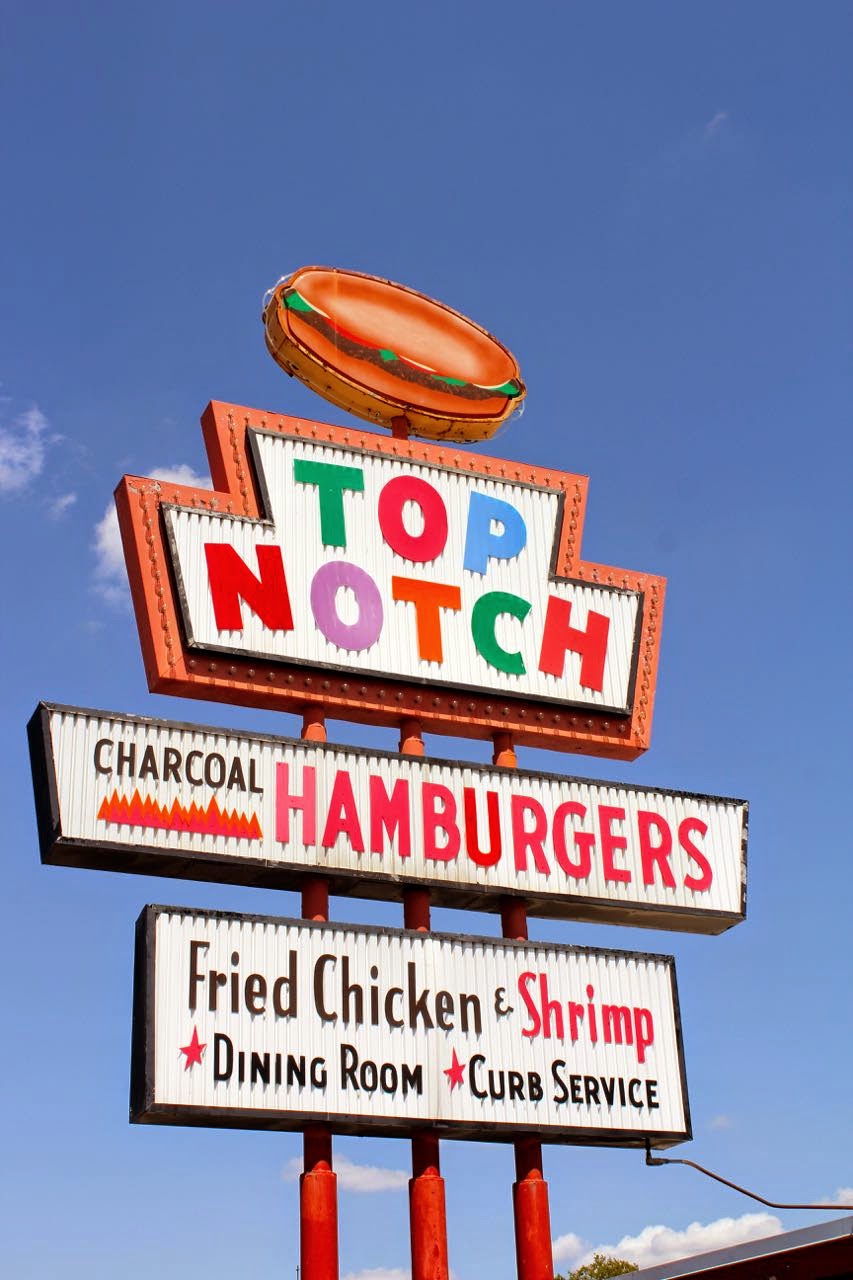 We are, dear neighborfolk, amidst a burger renaissance, the likes of which haven’t been seen since the golden age of burger shacks some seventy years ago. And Burnet Road is partaking in the largess with several new spots as well as a few reworked stalwarts. With the burger wars heating up, the patty-slingers are attempting to differentiate themselves not only with their sides but with their buildings as well.

The late 40s and early 50s burger boom reflected post-war euphoria and a young back-from-the-war generation leaning eagerly toward the future. Architecture similarly responded with the sudden popularity of what would later be called Mid-Century Modern. Retail reacted with a space-age Jetsons form of Modernism called “Googie”, named after the exuberance of John Lautner’s Googie Coffee Shop built in Los Angeles in 1949. Burger shops similarly wrapped their griddles with Googie to attract attention—and hopefully sales.

The local burger renaissance seems to have started to sizzle in 2005 with P. Terry’s first shop in south Austin. Architecturally, P. Terry’s was inspired by Mack Eplen’s Drivateria in Abilene and its Googie architecture. P. Terry’s ninth shop, a mega-Googie masterpiece by the Michael Hsu House of Architecture (also a denizen of Burnet Road), recently opened up at 8515 Burnet. As P. Terry’s success rises, the Googie-ness of their buildings grow (yet the Fast Food Nation-friendly burgers and fries remain delicious).

Open since 2006, Phil's Icehouse, named after a founder and ably occupying a former filling station repurposed by Michael Hsu, slings up a number of locally-named burgers, including “The Allandale”, a cheeseburger with cheddar, onions, sliced tomato, lettuce, pickles, mayo, and mustard on a toasted sourdough bun. The warmly bricked garage bays provide ample space for ordering and inside seating while the gas pump canopy outside provides respite from the sun while watching the wee ones ride cows. 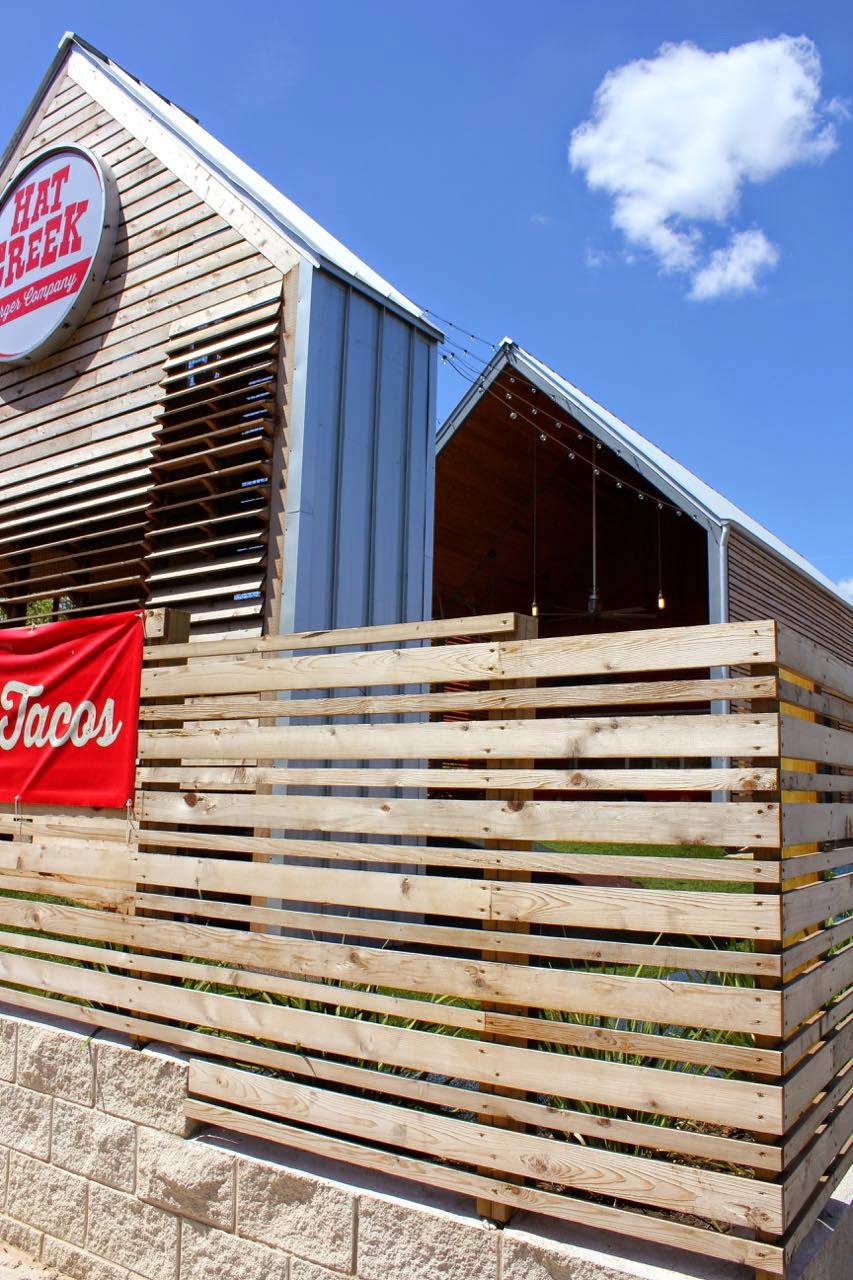 Started in 2008, the Hat Creek Burger Company (a name inspired by Lonesome Dove) transitioned from trailer to brick-and-mortar by moving into the old Arby’s building at 5400 Burnet. While I was sad to see that enormous Arby cowboy hat sign fade into the sunset (western Googie?), the recent remodel is amazing. Reach Architects sliced the end of the barn-like building like a loaf of bread, setting the “heel” back from the main loaf, creating not only a playscape and outdoor patio but a screen against the hot Texan sun. All in all Hat Creek is a great contemporary place to eat an avocado-topped turkey burgers with a side of fried pickles. 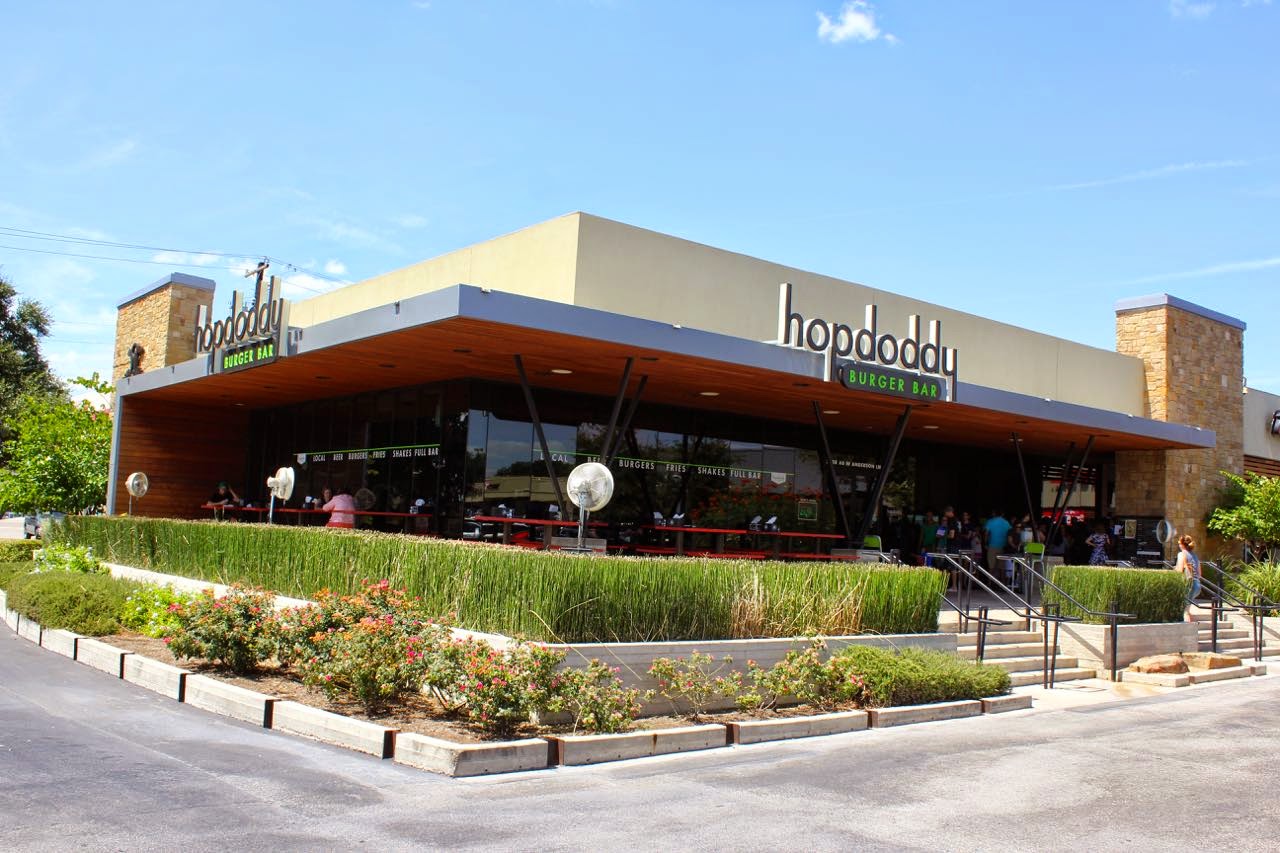 Hopdoddy Burger Bar (a fusion of “hop” from beer crafting and “doddy” from what the Scots in Aberdeen call their native moo-ers) started in 2010 and opened their second shop at 2438 West Anderson Lane. Hopdoddy slings deliciously messy gourmet burgers in a sleek and chic (yet toasted-bun warm) Modern shell. Levy Architects won an award from the Austin Chapter of the American Institute of Architects for the reuse and redesign of the site (anybody remember the dreadful strip that housed Souper Salad?).

Hill-Berts, an Austin institution since 1973, wasn’t allowed to renew its lease in the gettin'-hipped-up Centennial Shopping Center at 7301 Burnet. The Food Network-featured Twisted Root Burger Company, started in the Deep Ellums of Dallas in 2005, will take its place after a remodel, completing a restaurant trifecta at the Center that includes Teriyaki Madness and Tacodeli (apparently only “T” restaurants are allowed in the revamped Center…). Twisted Root, a name inspired by a cranky hand-cranked French fry cutter, pitches gourmet burgers (including vegan and game) as well as adult shakes (Hear ye! Hear ye! Shakes with liquor!!!). Michael Hsu, the aforementioned master of repurposing and restaurant design, has hipified the tired 1980s architecture of the Center, but one of the owners of Twisted Root, Jason Boso, is taking the lead on reworking the old Hill-Berts building. 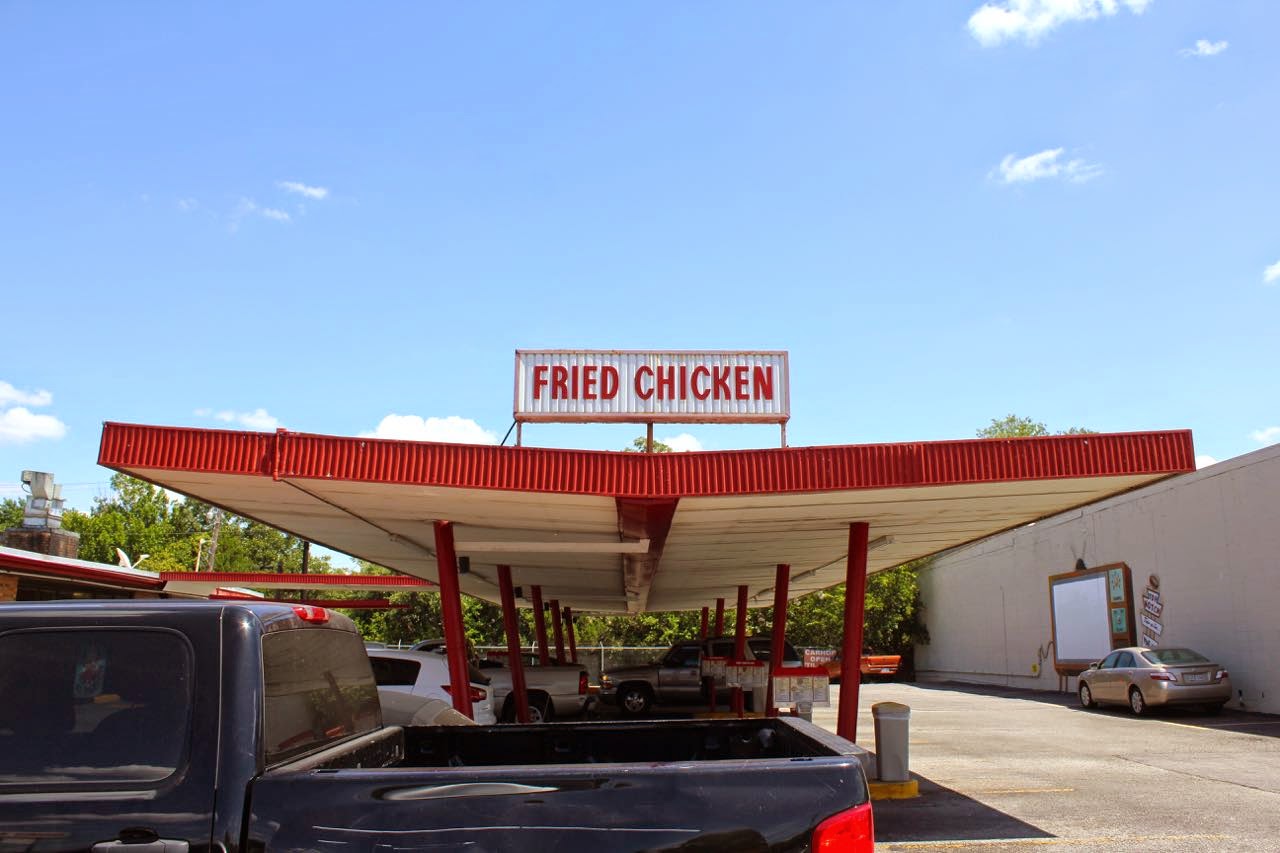 Are you really a burger joint if your butterfly roof yelps "FRIED CHICKEN"?

Speaking of local oldtimers (and one that hasn’t been run off), Top Notch Hamburgers at 7525 Burnet started in 1970 and still sports its Googiesque street sign and Mid-Century Modern butterfly roof over the drive-in. Featured in Richard Linklater’s “Dazed and Confused”, Top Notch nearly closed twice after the original proprietors died before being saved by the owners of Galaxy Café. Despite the Galaxians adding Sunday hours and accepting credit cards, the place is oldskool through and through and still serves its straight-ahead delicious aburgers and chicken. 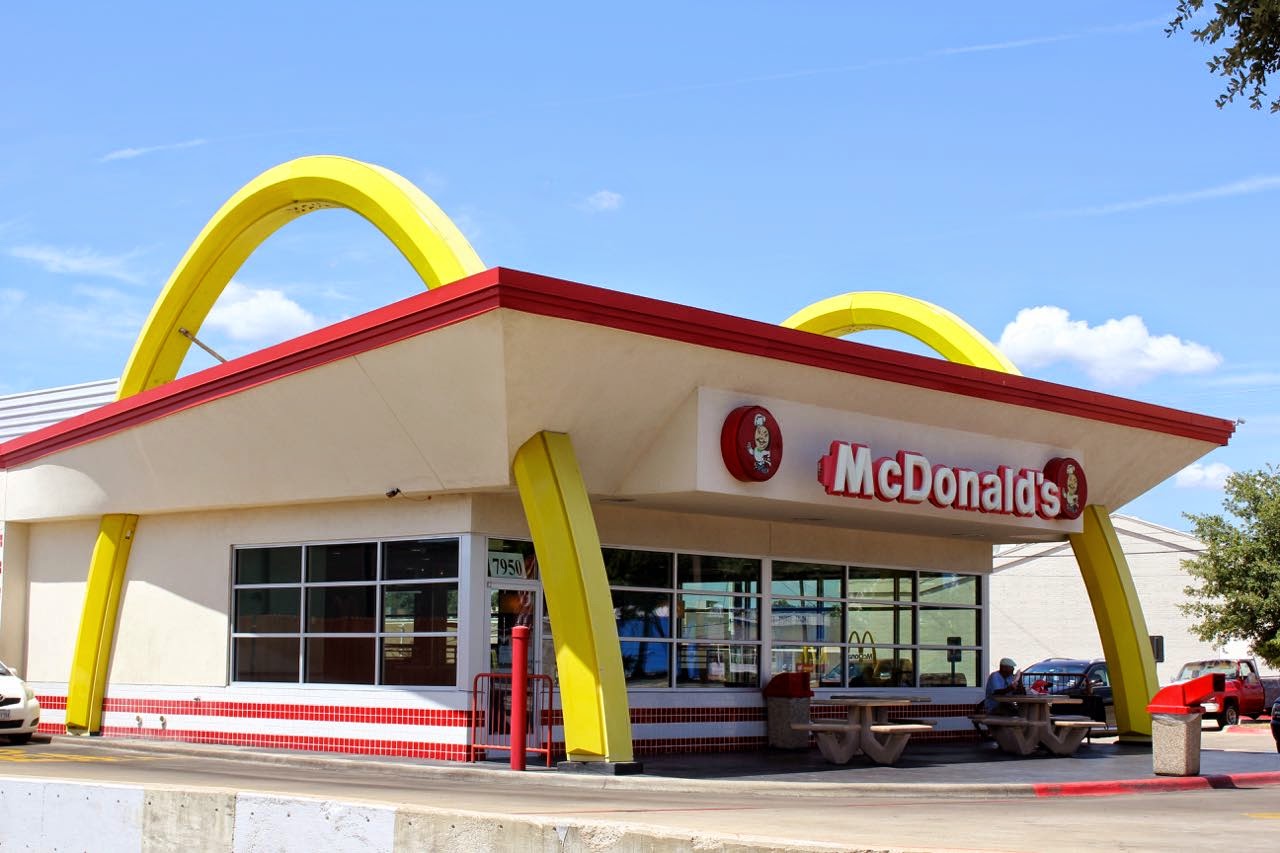 There are, of course, other burger joints in the neighborhood (Billy’s, Waterloo Icehouse, Big Daddy’s Burgers and Bar, Elevation Burger, Short Stop, Jack in the Box, Whataburger); however, none of these sport burgertecture that is particularly inspiring. Sonic continues to vaguely employ 1950s Googie in its stores, and the McDonalds at 7950 Burnet remodeled several years ago back into its early Googie roots.

Architecture doesn’t make a burger taste better, but as P. Terry’s notes: “…we think [our architecture] makes for a better dining experience.” I wholewheatbunheartedly agree. So the next time you head out for a burger, just say no to the fries, sit down, and look around. Have a side of architecture instead. Fewer calories (and hopefully no heartburn!).
Posted by bubba of the bubbles at 4:00 AM