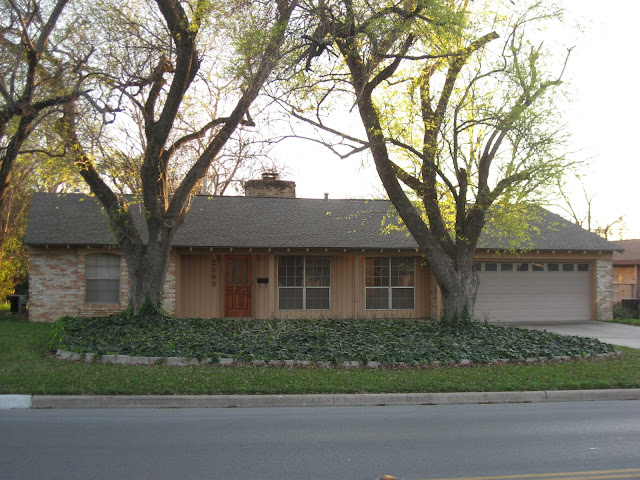 Got a call from a pal, Ms. D., wanting some advice on how to Mod up the front of the house above. Mod'ing up is a good topic, because I've been making mental notes on this for a while, having admired what I call Marfa Modern (Mod-ifying existing homes) and closely observed several well-done remodels in the hood.

So here are my thoughts.

Nothing is more of a Mod buzz killer than shutters, doubly especially if they are (a) nonfunctional and/or (b) missized. I could go on and on, but earlier rants are here and here. Now I suppose that if you have honest-to-goodness functioning shutters, perhaps you should keep them (and reconsider Mod-ifying your already honest house). But in all other cases, please: TAKE. THEM. DOWN. 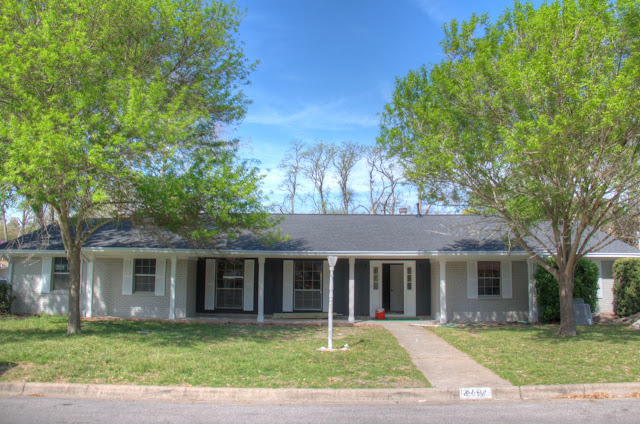 This house could easily be Mod, but the shutters are a buzz kill of Colonial scale.

Modern calls for large expanses of glass. And although you might not be able to put in large walls of glass in your existing house, you might be able to declutter your existing windows. In the photo above, there's not only the Unbearable Sadness of Unfunctioning Shutters but also, if you look closely at the windows, the criss-cross messiness of panes in the ass. Trust me: those windows are not divided into individual panes of glass; they are single panes with divider-grills to make them appear as multiple panes. If you are lucky, you might be able to just pop those grills out and—ta-da!—semi-modernized windows! If you are unlucky, you may need to buy new windows. If you do that, go casement: Double hung, although not a deal breaker, should be double hung from the nearest tree like a train robber. New windows have the added benefit of far greater energy efficiency as well as muffling outside noise. 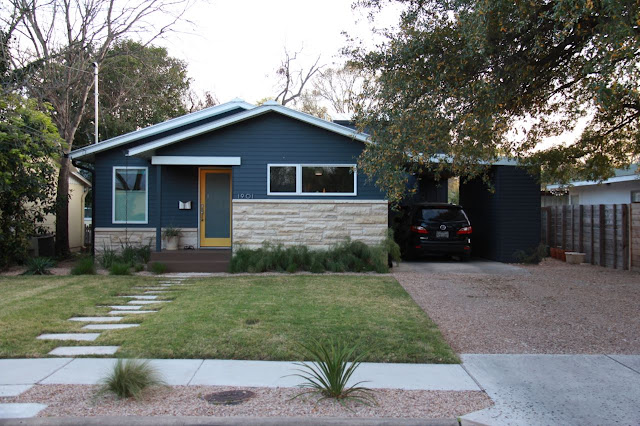 These folks did a nice job of replacing their existing windows with casements.

Modern houses don't tend to put a lot of lipstick or hair gel on (I know, I know: some do). They speak in volumes, focusing on the massing and geometry of structure. Color can be used to draw attention, but color can also be used to wallflower. And however Modern houses accent or recede, in general, modern houses use a limited color palette.

The house in the photo above in nearby Crestview is, by my eyes, masterfully done (it has architect written all over it). Despite the traditional gable rooftops, the owners already had the great fortune to have purchased a home that echos midcentury modern: asymmetry, protruding/receding volumes, horizontal lines, and a touch of natural materials. Setting aside the screen door, there are three colors: white, dark blue, and limestone. The dark blue recedes the main volumes of the house allowing the limestone to project. The white showcases the windows and the gables but, most importantly, the strong horizontality of the entryway roof and the window to your right. There's actually a fourth color: look at the stairs leading up to the front door. Dark brown. Brilliant! It completely recedes the stoop into the background leaving the focus on the limestone, windows, and roof lines. These are bold colors, yet sophisticated and refined. There's a Modern addition in the back that nicely recedes into the background. 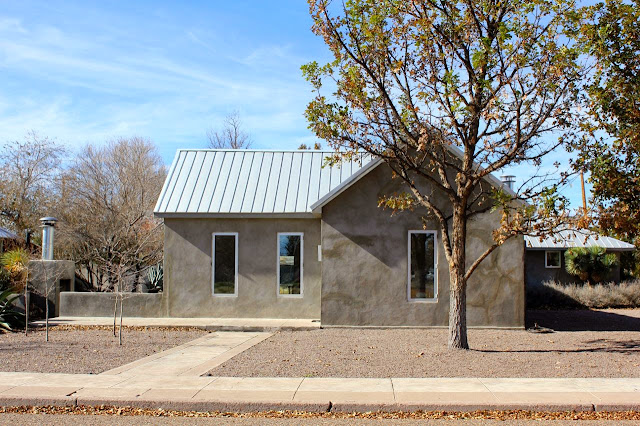 Above is an example from Marfa, the tiny capital of minimalism in Far West Texas. This is a traditional (vernacular) home that has been Modernized with casement windows; a uniform, natural stucco color; and minimalist landscaping. 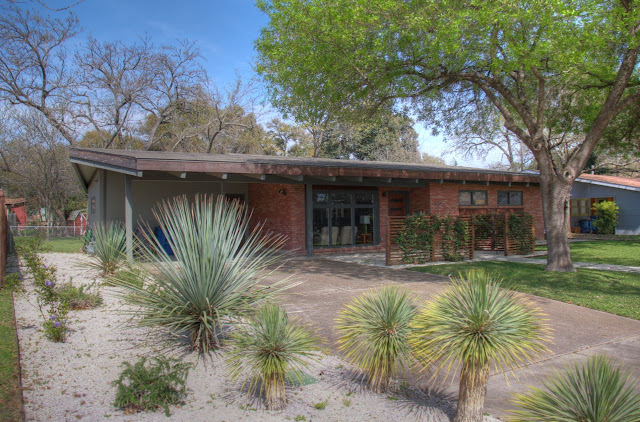 This house down the block from us is nicely done. Another architect-driven remodel that's sophisticated and refined. Understated trim colors allow the red brick to step forward in a modern way. 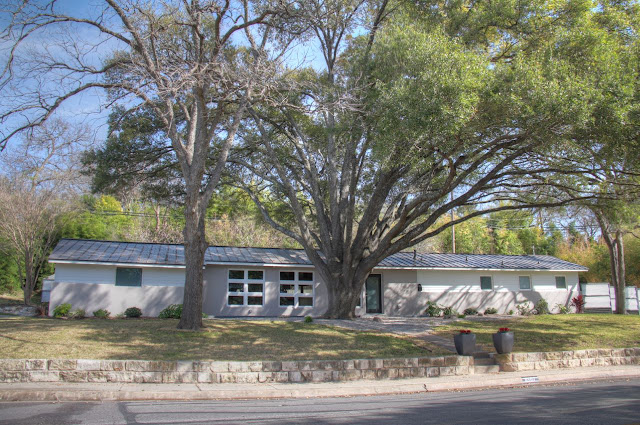 Yet another place in the hood where the use of color flattens and Modernizes the house. 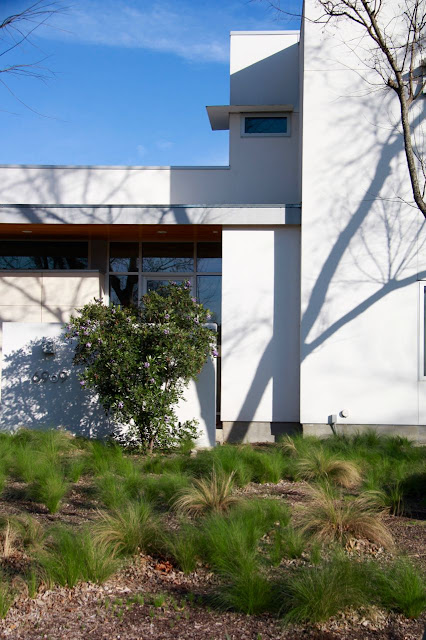 Not an old house (that's our house!), but very few colors.

If your doors have relief panels on them or, Gawd forbid, one of those grandma-era stained glass oval windows, run—don't walk—to the nearest mod-door store and get a mod door. The front door is a focal point of any house (that is, after all, where you and your guests enter the home). Modern doors should be flat and featureless with some mod windows, especially for midcentury modern. Sadly, a company local to Austin—Crestview Doors—that made a number of gorgeous midcentury modern inspired doors [including one called The Allandale!] recently went out of business. 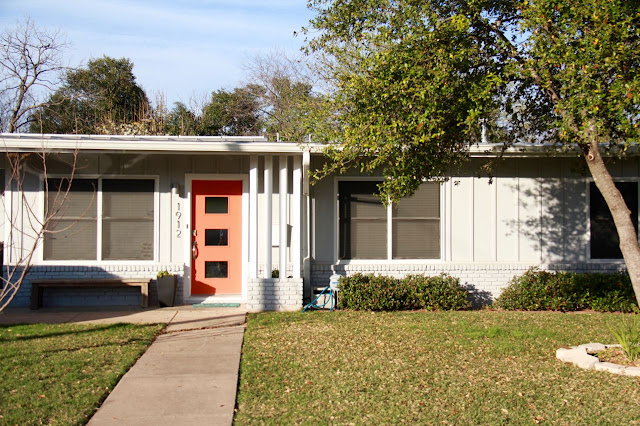 Swell little door on a swell little house in Crestview. Note how these homeowners flattened the home's facade with a consistent color and then used a carefully chosen accent color on the door. Speaking of which...

Although not required, popping your modern door—giving it a bright color in contrast to the rest of the house—is another trick to mod your house. The photo above is a great example. Your guests will never ask: Where's the front door? Popping the door also helps in redirecting attention away from features perhaps you don't want folks noticing. 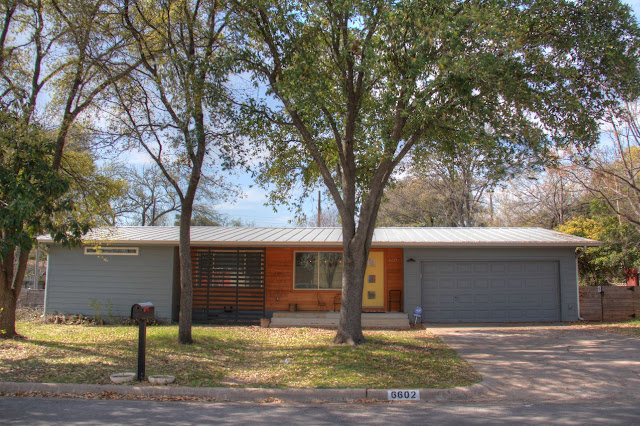 Another house down the street from us.

The house above is an architect-designed remodel. It's clear where they wanted your attention focused: on the middle of the house. The wings are a uniform gray except for the thin horizontal casement window on your left. If you look closely, the garage door has a decidedly un-Modern relief on it, but painting the door the same color as the house flattens its effect. 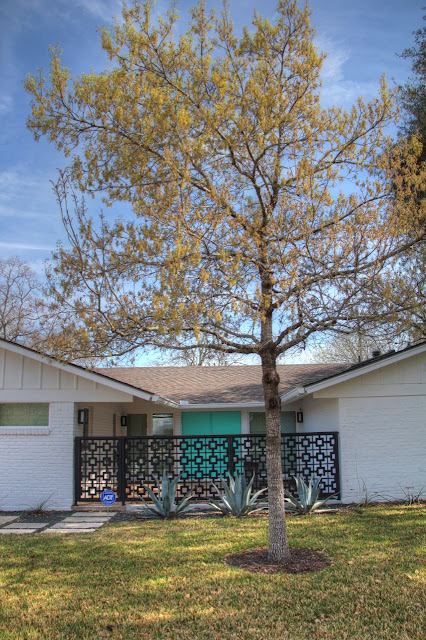 Another house in the hood where the house is flattened with a single color and a colorful door and feature fence pop the entry. 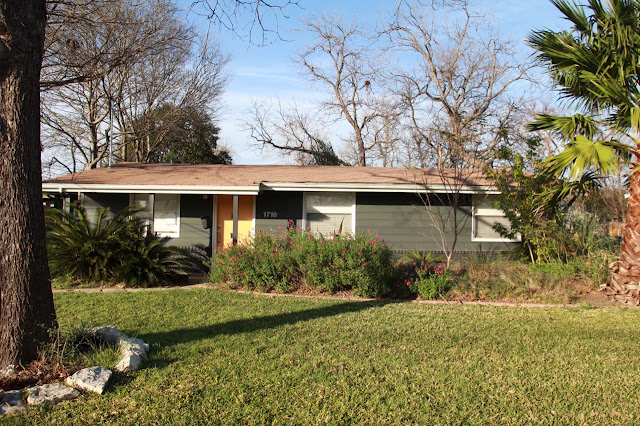 Uniform color (flattens out the brick [can you see it?]) with a popped door. Here the landscaping is used to hide the now undesired brickwork. 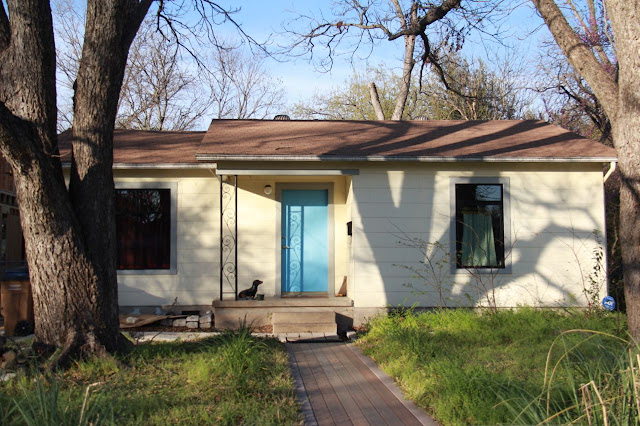 Simple and nicely done. Casement, color, and a flat poppy door. You barely notice the scrollwork on the column (which actually, in this case, is a nice touch). 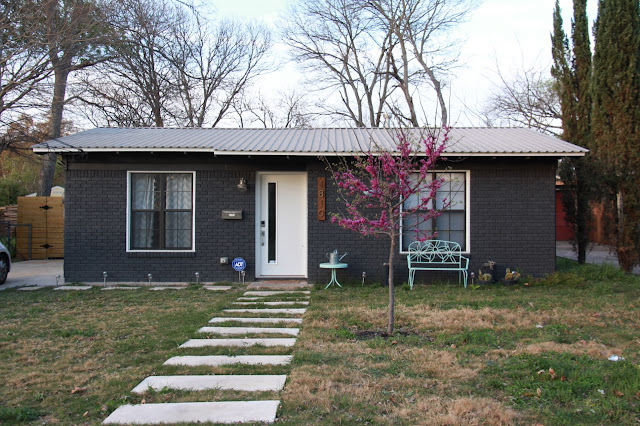 Panes in the windows are overcome by the simple color choice (with a house color the same color as the panes) and a white door that, even though it's white, pops. The white around the windows draws attention away from the panes.

This can get expensive, but through hardscape and minimalism, the landscaping can compliment the modernism of the house or further detract from non-Modern elements. 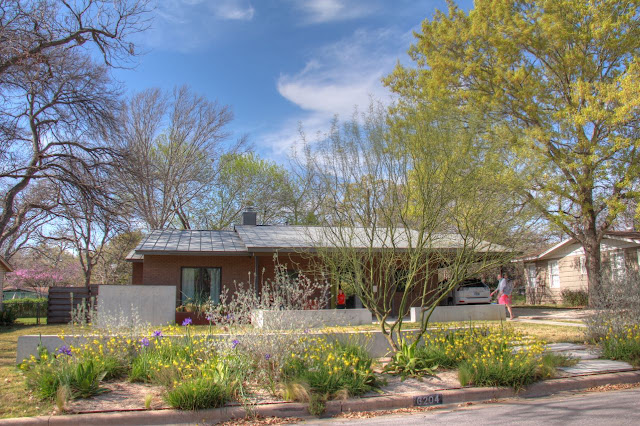 Traditionalish house that has been modded but also has a fabulous modern landscape with concrete walls. 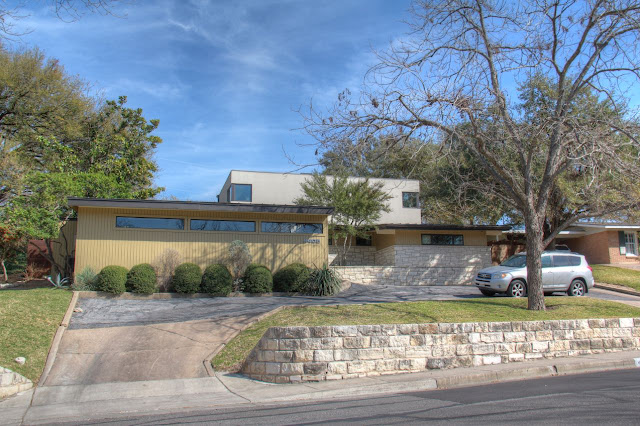 back to "our" house

So what would I do with this house?

My inefficient approach to color is trial and error. I eventually get there, but not without a bit of time and a bit of expense in quart-sized splashes of color.

I'm going to wash those panes right out of my hair.

Something hip a la the defunct Crestview doors. I bet Atomic Ranch has some vendors.

4. Get a modern garage door.

The little windows at the top of the current garage door are cool (keeps the eye horizontal), but the relief is uncool. If I couldn't replace the door, I'd consider fastening flat (light-weight) panels to the front. If that was off the table, painting the door a similar color to the trim would help it fade.

5. Square up the window on the left.

If you look closely, the trim is rounded. That is not acceptable.

6. Repanel the front with horizontal Hardie.

The house is long and ranchy; horizontal siding would amplify that distant FLW influence. To add a little interest and a slight hip touch, I'd vary the width of the siding thick and thin.

First, I would try to not paint the brick. Although not particularly purdy, there's enough white in the brickwork to perhaps work with it. Why not paint it? In most architectural circles, painting brick is a sin, and for good reason. It's a natural, low-maintenance material; painting it removes that benefit. Painting brick also alters how a structure breathes and sheds moisture (although in an older home it's probably not [too much] of a concern; the house appeared to still have weeping holes in the brick). If I kept the brick, a light color scheme on the rest of the house (trim, garage), a darker inset volume (where the siding will go), and a Door That Really Pops might do the trick (not to mention saving the money from prepping, priming, and painting the brick).

If I decided to paint the brick, I'd go with a light-light tan (the brown roof is forcing us to be earthy...) on everything (trim, garage, brick) except the inset volume. There I would go for a darker color (coffee brown?) with a calm orange door.

Ultimately, there are no right or wrong answers, just preferences. And these, my friends, are mine. Perhaps with attentive Mod-ifications, we could avoid seeing these babies parked out front of more and more houses in Allandale... 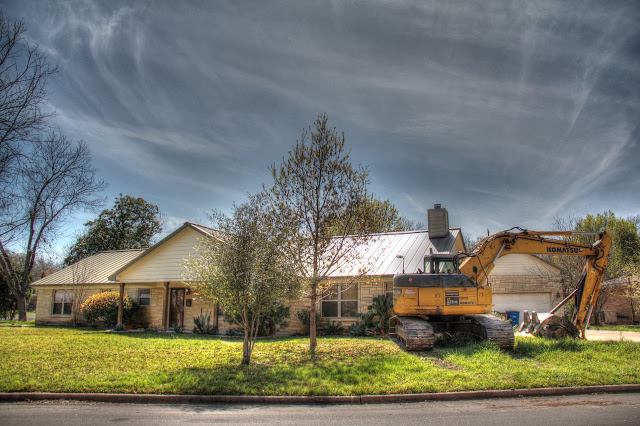 Email ThisBlogThis!Share to TwitterShare to FacebookShare to Pinterest
Labels: painting