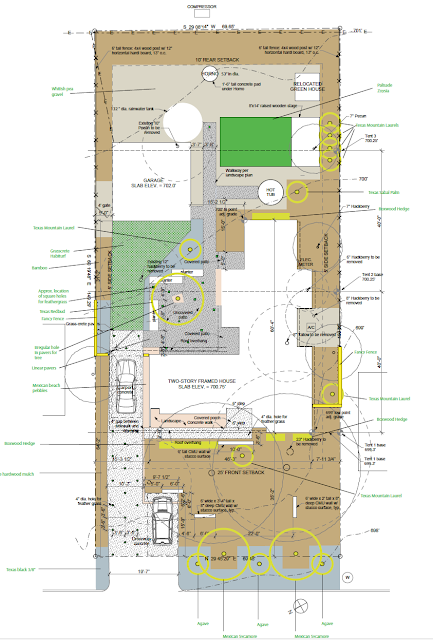 We still have unfinished bidness in the yard that we hope to (finally...) finish this year. All it takes is resolve (and lots of bucks). In retrospect, we wish we had bitten the budgetary bullet and gotten as much of this done when the house was getting built. Doing it later adds additional costs and logistics. On the other hand, living with the unfinished landscape also allowed us to refine what it is we wanted; something that's hard to do when the finished product is only on paper.

Inspired by our New Year's Resolutions (and a bonus or two), we've embarked on finishing up a chunk of the landscaping. The landscaper stopped by yesterday to talk about getting some work done. 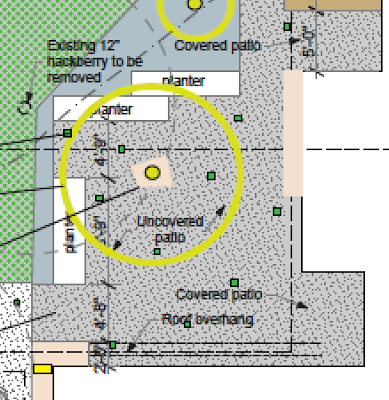 The architects envisioned planters framing in the patio. Perhaps it's the power of suggestion, but there is indeed a spatial need to hem in the space. Currently, the patio is a bit forlorn in its openness. The envisioned planters will frame an outdoor room, creating intimacy and coziness.

What we're going with here is slightly different than what's shown and envisioned ni the plan (sorry architects...), partly because we have slightly different goals and partly because the paver installers didn't exactly follow the plan. For the planter on the lower left of The Patiogram, we're putting in a pond and planter. The architects envisioned planters made of raw plate steel which would then rust. We're not into that rusting thing, so we're going with board-formed concrete using 2x4s to evoke the siding of the house. The pond/planter will be about two feet tall so people can use the structure as seating during shindigs. 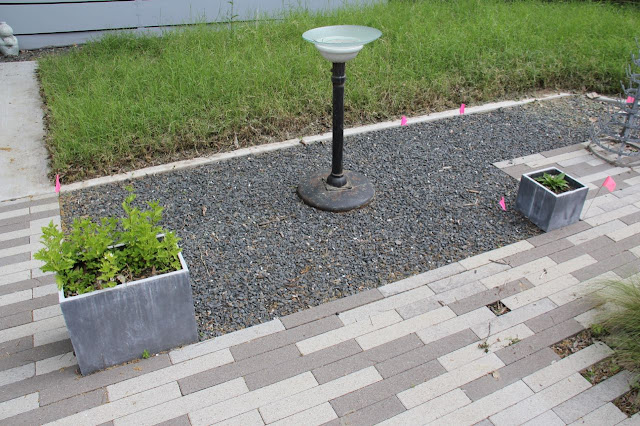 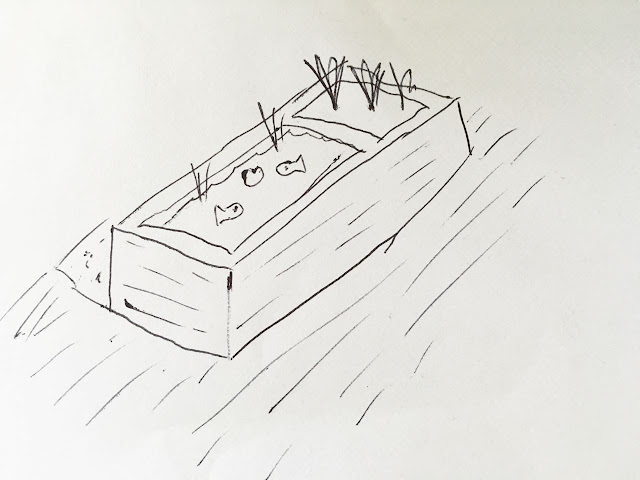 My half-assed drawing of what that thing will look like.


For the two planters on the upper part of The Patiogram, we're going with concrete for the uppermost one and white powder-coated steel on the lower one (not enough room for another concrete planter there). The concrete planter will be two-feet tall (again to accommodate seating), and the steel one will be one-foot tall (for aesthetic reasons). The two slide past each other in classic de Stijl motion. 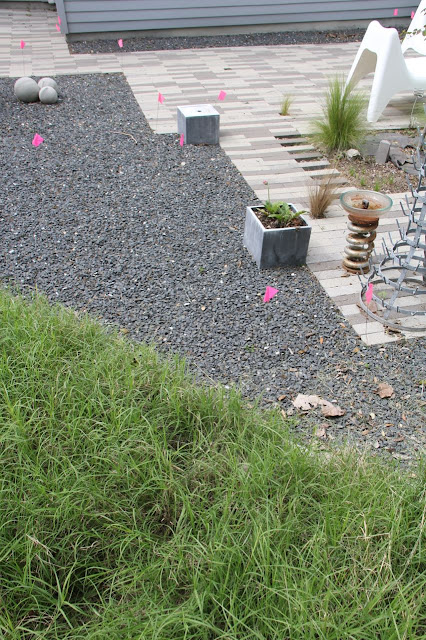 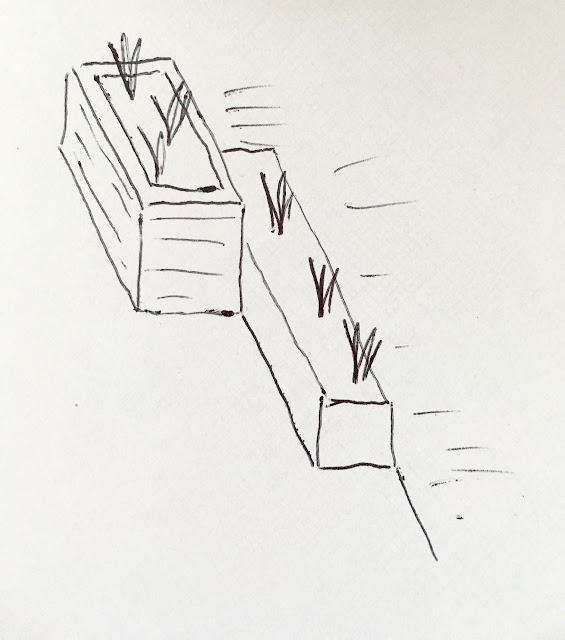 Concrete on the left, steel on the right.

This long rectangle of gravel next to the house has turned out to be too much gray, so we're breaking it up a bit by adding in a smaller sliver of zoysia. Some green on that side of the patio will nicely frame the patio space and tie the area to the rest of the yard. 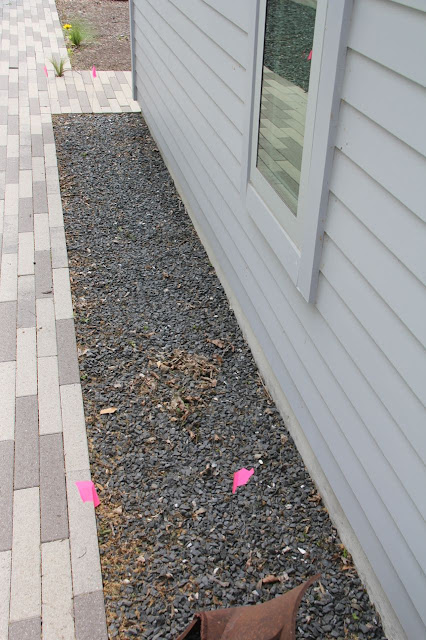 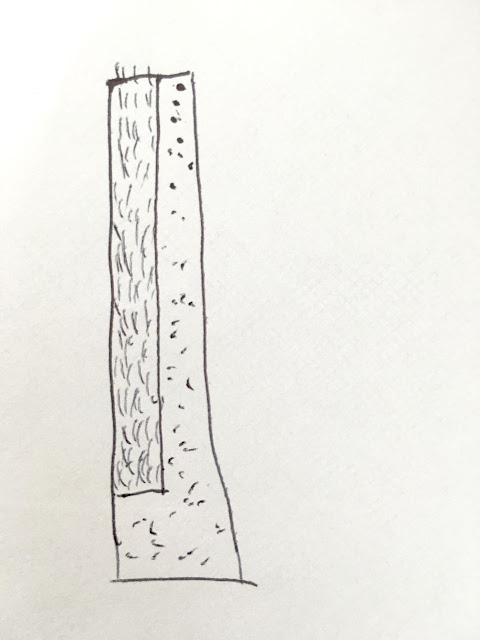 Amidst the mayhem of finishing the house, we left this gap in the pavers purposefully undone until we decided what to do. If you look closely at The Patiogram, the architects showed an irregular shape. When I asked them about it, they described it as more of a placeholder until we figured out what we wanted. Since we didn't know what we wanted, we just had the installers leave the gap somewhat unfinished. We're going to have the landscapers square the thing off and call it a day, something we should have done the first go-around. 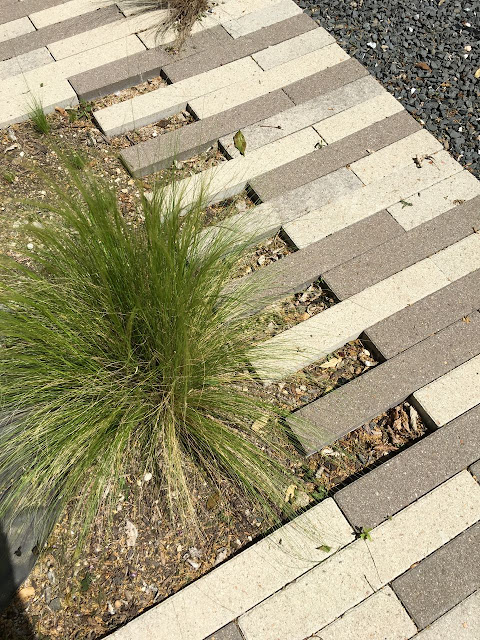 We gave the landscaper carte blanche for this north-facing space outside the master bedroom. He likes the statue, so he's planning on making a de Stijl concrete base to elevate it above the plantings. Because the windows hang low, he's going to keep the plantings low as well with a train of small bushes that march around the corner. He'll then place intermediate plants between the bushes, concrete base, and ground cover. Should be soopercool! 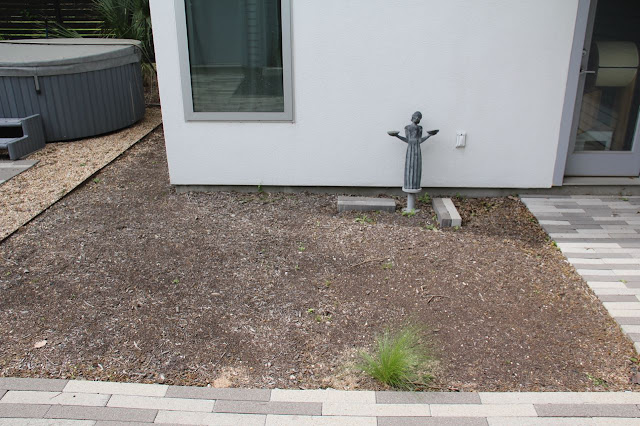 5. a step in the right direction

The stage needs a step (or two), so we're going to put a board-formed concrete step here to be followed up with a lower height (and smaller) wooden step. Steps ideally should have a 7-inch rise, so we'll need two steps eventually. Having a hunk of concrete over here will also be great for materially tieing in this side of the back yard with the rest of the space. 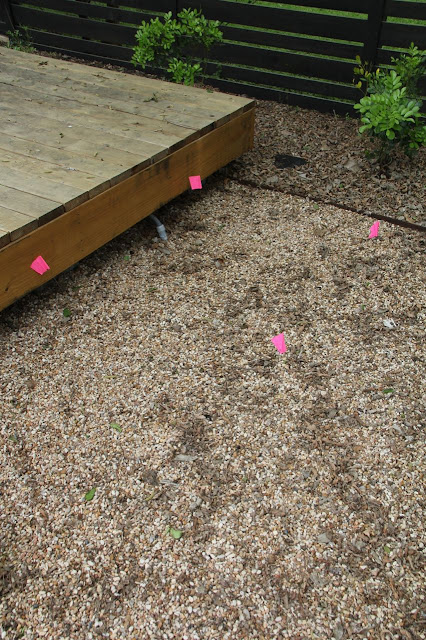 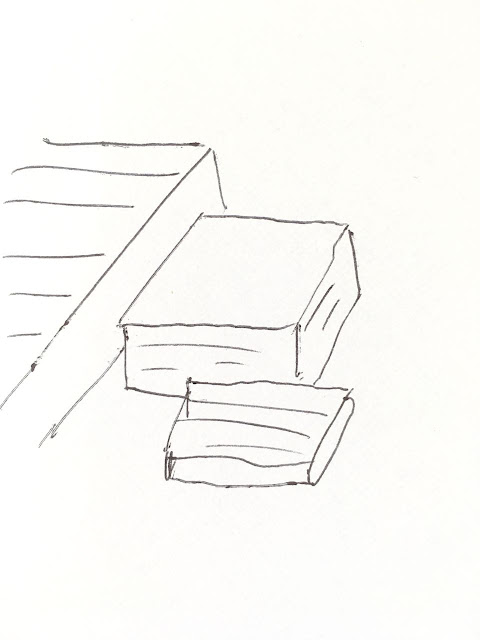 And then we have the infamous art towers, paint filter frames made of iconel, remnants of a project from the bride's day job. These babies will go in the front yard to fill in a space begging for them. 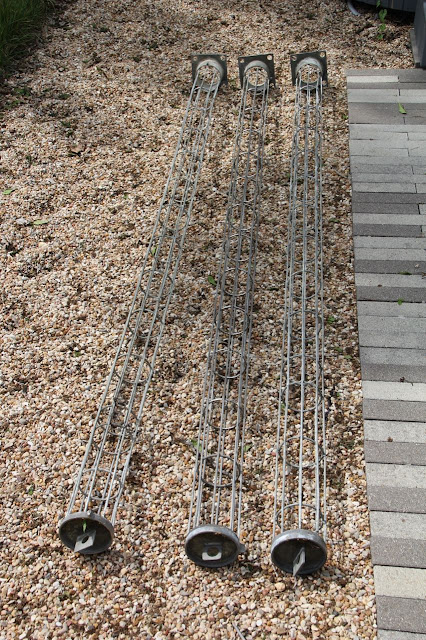 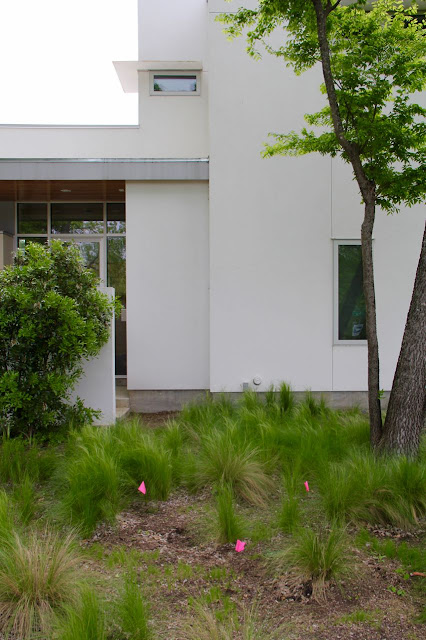 We're using the same landscapers that put in the original landscaping at our house, Michael Biechlin of Groundmasters LanDesign. They are easygoing, comfortable with Modern, precise, clean, and reasonably priced. Hard to have any issues with that! The final landscape design is an amalgam of the desires of the architects, a landscape architect (who disappeared after giving us the initial concept), the builder, Michael Biechlin, and, of course, us. We're pretty happy with it so far. 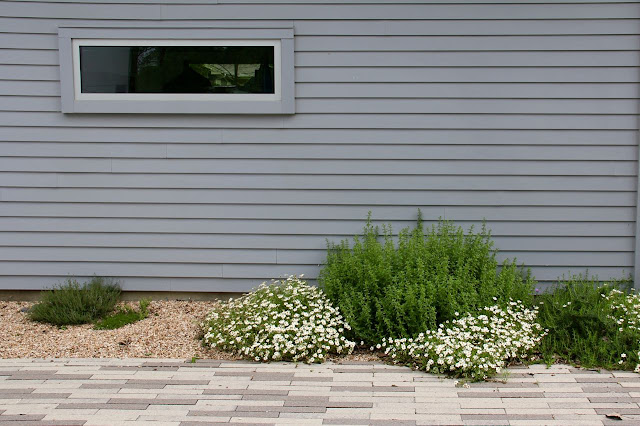 Posted by bubba of the bubbles at 2:09 PM