The Schindler Cabin: Which way is west? 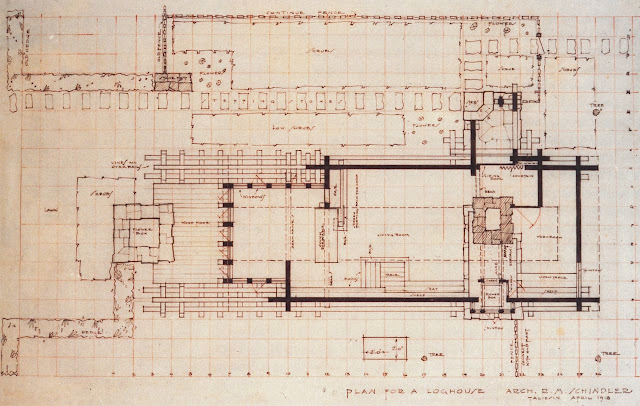 We have a dream. The dream is to have a cabin in the mountains we can go to in the summer after we retires for three to four months to avoid the brutal Texas heat. A key twist to that dream is to build Schindler's unrealized log cabin from 1918.

Cool summer temps are critical and non-negotiable. A location in New Mexico is preferred, but negotiable (especially if we can't find cool summer temps). And our desire to be in a place with pine trees is so the log cabin makes contextual sense. Minimal building restrictions relate to being able build in whatever style we'd like, but also to avoid having to modify Schindler's design too much to meet building code requirements.

Some wished for (but not dealkiller) items are:

At first we were looking in northern New Mexico (northern = cool), but we found that the Sante Fe and Taos areas are quite unexpectedly warm during the summer. That caused us to expand our search to southern Colorado when we stumbled upon the Cloudcroft area in southeastern New Mexico.

During our expanded search, I landed upon a web site called Land Watch which shows temperature stats for the area you're looking in. Here's the data for Cloudcroft: 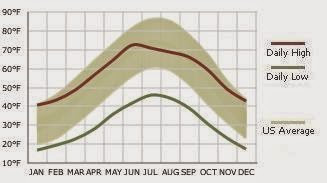 An average daily high of about 70 degrees and an average daily low of 47 degrees in the summer. That sounds like heaven to this August-weary Texan. We may need to add "summer hot tub" to that wish list...

So our plan is to spend a week in Cloudcroft this summer to check the area out. Is this where we want to build our summer cabin?

Since we have a cabin picked out that we want to build, we have the added complexity of finding a lot that will accommodate Schindler's site plan, shown at the top of this post.

Some observations of that site plan:

- it assumes a flat site of about 30 feet by 60 feet for the house and, ideally, 40 feet by 80 feet for the full site plan and
- it doesn't indicate orientation (in other words, which way is north?).

I suppose one could assume that the orientation shown assumes north toward the top with the other directions following suit. And although Schindler is careful to not refer to direction when showing elevations, he does slip when showing an inset elevation of a bookcase: 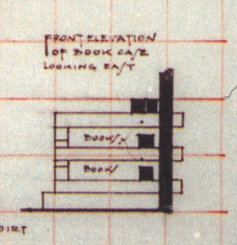 See where he writes "Looking East"? Ha! That means that north is indeed toward the top of the plan.

But that doesn't really make sense to me...

Presumably Schindler designed this house for the upper Mid-West, land of long winters. So why would he place the door on the north side of the building and orient the main windows north and west? It seems to make more sense for north to be toward the bottom of the site plan: the door would be out of the direct blast of the north winds, the side of the house with hardly any windows would be backed up against the north winds, and the mostly glass room (the bedroom) would be facing east, but would also get ample southern sun (good thermal loading).

I suppose the plan would work just as well with North oriented to the right: there would be a wink of eastern sun, solid southern sun, and four winks of western sun. There would be a wee bit of a wind buffer with the porch entry, which is slotted logs. Perhaps we just need to find a relatively flat area of about 100 by 100 feet and let the architect figure out the orientation when we have to.

In addition to the cabin we envision an architecturally compatible carport with storage, perhaps with an attached small flexible living space (will we go stir crazy in that cabin?).

Expect to see us in Cloudcroft in July or August of this year. We hope to talk to an agent to get the lay of the land and check the area out. Maybe we can even find an agent that can spell! 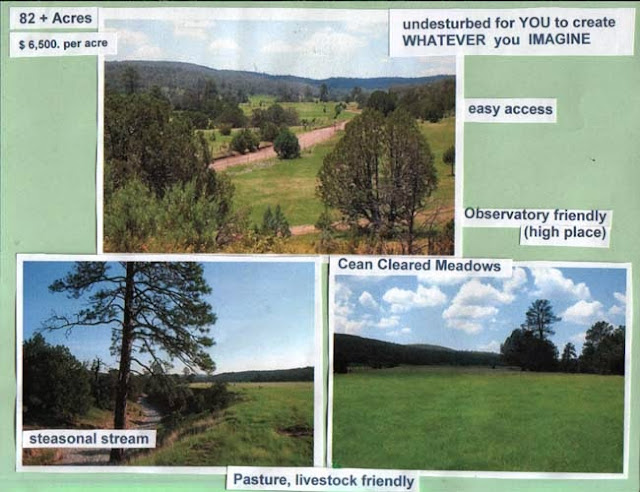 And you gotta love highlight photos of the property that include turd shots! 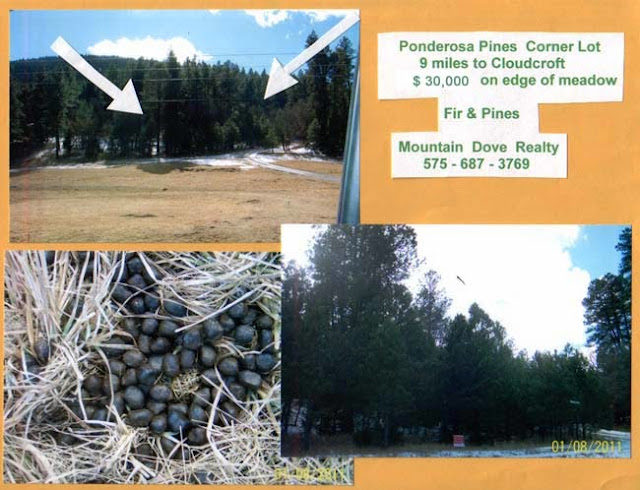 cloudcroft.com
Lands of New Mexico
Land Watch
Posted by bubba of the bubbles at 12:19 PM