haiku for "My Beautiful City Austin" by David Heymann 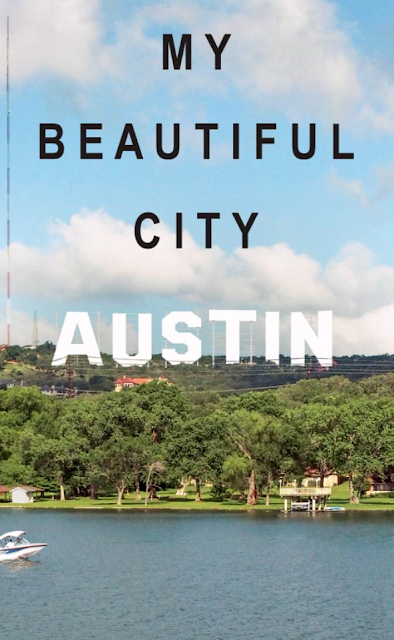 houses above trees
people wanting to belong
my beautiful town...

I became aware of the book My Beautiful City Austin after reading a brutal, eye-wincing review of it in the Austin American-Statesman. Given that this large-fonted, 161-page wisp of a tome is written by a local architect—none other than David Heymann, he of George W.'s uber-green and thoughtful ranch house in Crawford—fate required I buy it.

It's an odd book. It reads as non-fiction—an architect's observations about Austin, its changes, and its people (especially when its people are architectural clients). In fact, that's how I read it: as non-fiction. It wasn't until after I finished and read the author's epilogue that I realized it was fiction. That made me a wee bit sad because the book works better as non-fiction than fiction. Sure, the fiction is likely inspired by the real-life observations of an architect, and yeah, it's the same book fiction or not, but as fiction the book left me somewhat wanting.

The first chapter, a description of Austin and the surrounding area in the good old days, is a challenging read. Nearly every sentence is weighted with an overly clever metaphor or simile, almost as if the text was from a NaNoWriMo exercise where every possible word is glommed onto a sentence to meet the day's word count. The creativeness is appreciated, but, wow, is it overdone. It's like employing all your lovemaking tricks in the first 90 seconds. What are you going to do for the remaining three and a half minutes? Fortunately, once Heymann starts storytelling, his style eases, and the dialog propels the book forward.

There's no plot. There's not a problem to solve, per se. It's description and small parables about how today's architecture, especially in Austin, is so unthoughtful. The reasons are manyfold: free-spirits falling into the groove of society's expectations for success and raising a family, lack of money, peer-pressure, inward urbanism, and narcissism. Heymann's unnamed character describes latter-day Austin from the top of Mount Bonnell: "Where there had been a hot hairy emptiness, now as far west as you could see these steroidal houses, huge and tall and gross and unseemly and pretentious, were erupting out of the cedar forest like a horrid skin condition, an outburst of limestone whiteheads." Austin is not alone in this, but with its progressiveness it is a head-scartcher as to why there's not more thoughtful architecture here.

There are a lot of judgements about people who commission custom homes, some of which are laugh-out-loud funny: "...to amass that kind of cash [to buy a lot and build a house] you typically have to be an asshole, or be genetically related to one, and in the path of their cash flow." But Heymann equally judges architects: "There should of course be a biblical injunction against the coupling of architects. Architects are wired to relate by denial. It's their own brand of competitive snobbery." and "...a drunk architect is usually pathetic." Spreading the wealth, Heymann takes aim at the backcrackers as well (you'll need to read the book...).

And then there's the comedy of an architect writing a wee bit about water: Lake levels vary in Lake Travis to keep Lake Austin level (uh, no...), water in Deep Eddy is piped over from Barton Springs (oh hell no...), Hamilton Pool is described as a caldera (forgivable mixed geologic metaphors). But I can't really talk: Austin Cubed is the comedy of a hydrologist writing about architecture (maybe Heymann and I should get together and compare notes!).

Despite it's issues, I did enjoy the book, and I think architects, or anyone appreciative of architecture, particularly contemporary (organic) architecture, would enjoy it as well. I also think the book is going to stay with me in that I will be thinking about it and its message for years to come. In that sense, the book is a success.

Based on the Statesmen's brutal review, perhaps one has to be more embedded in architecture to understand and appreciate the message. Along those lines, maybe the book needed a more direct explanation about how good architecture could preserve the city. And maybe a couple success stories to yin the yang of negativity about clients (do architects go their entire career without having at least one great client?). A success story could have also educated readers on how to be a great client. On the other hand, the vast majority of building in this country is horrific. The bride and I see new houses springing up in our 'hood with no consideration of solar orientation or place, replacing the 1950s cookie-cutters that also had no consideration of solar orientation or space. These new houses will sell for $750,000 to $900,000 a piece. Couldn't an architect have been brought in to, at a minimum, tweak the existing design to be responsive? Then again, the vastest majority of buyers don't care. The market doesn't demand it.

In his own architectural work, Heymann's roots lead back to organic architecture, especially landscapes absorbing buildings and buildings responding to place. In fact, he holds the Harwell Hamilton Harris Regents professorship in architecture at the University of Texas. His description of a house designed for Hyde Park in the book read a lot like Harris' Fellowship Park House or R.M. Schindler's Kings Road House (an influence on Harris).

The book does a great job of capturing the angst of architects (at least as much as I, an observer, understand it). The architectural profession seems to wander in a haze of melancholy. It takes a long time (and several recessions) before you can really spread your wings, clientele are often unappreciative of your skill set, and, in an ultimate irony, you rarely make enough money to live in your own attentively-designed space. The whole profession is suffering from bad karma. It's as if architects spent the economic downturn of the Dark Ages drowning kittens for fun.

Austin is in a beautiful setting, but Austin is turning its back on that setting. We're loving it to death through the thousand paper cuts of poor architectural decisions. 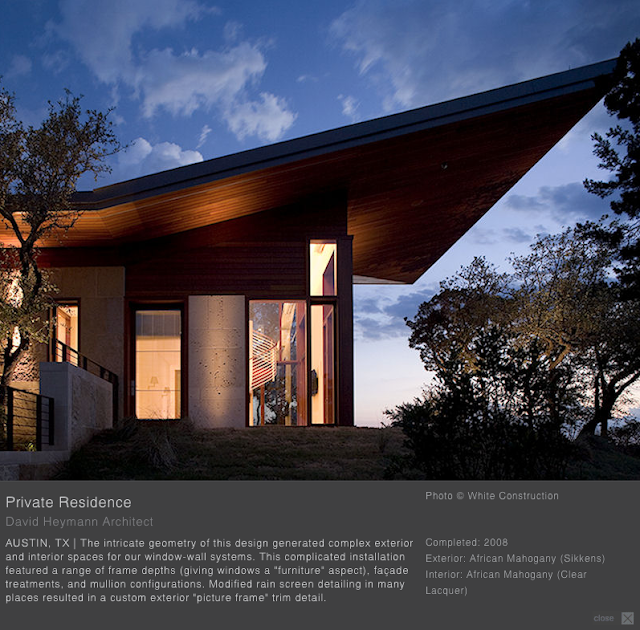 Posted by bubba of the bubbles at 8:55 AM