haiku for the book “Fountainhead” by Ayn Rand 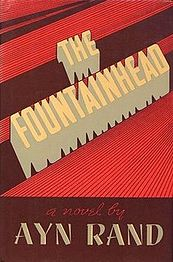 
the crowd wants to control you.
be true to yourself...


This book has been on my maybe-I-should-read-this-someday list for awhiles now, in large part because of its architectural backdrop. However, with Ayn (rhymes with fine) Rand entering the news as Paul Ryan’s favorite author and the book popping up in conversation with the Usonian Expert when I bumped into him at the farmer’s market a couple weeks ago, I decided it was time.

The novel (described as a "philosophical novel" by some) tracks the career and life of Howard Roark, an idealist architect on the bleeding-leading edge of Modern architecture. By Rand's own words, the novel is her description of the ideal man (or person, if you want to remove the sexism): an individual who adheres to his ideals and integrity, even if it leads to poverty and failure. Philosophically, the novel focuses on how societies strive to destroy idealists and force them to fall in line with everyone else.

Her choice of the ideal man as an architect at the leading edge of Modernism is perfect, undoubtedly influenced by living and working in Los Angeles in the 1920s and 1930s. Many suggest that the novel's hero, Roark, was based on Frank Lloyd Wright, but that's simply not the case. Given the number of biographies and autobiographies I've read, it appears Roark embodies bits and pieces of all the early California Modernists. As the photographer Julius Schulman notes: "...many architects would say to me 'Well, you know Ayn Rand patterned Howard Roark after me.' Raphael Soriano said that. Richard Neutra said that. Gregory Ain. There are others. Oh, many people said that."

I see bits of those folks as well as Schindler and Wright (although I do see a lot of Soriano's biography in Roark). Some have suggested that the dynamic between Roark and his (initially) more successful and accommodating alter ego Peter Keating reflects the Schindler-Neutra dynamic. Rand read biographies and architectural histories and even worked for half a year in Ely Jacques Kahn's architectural office to learn more about the profession.

If you know anything about Wright and architecture you quickly see that Roark is not based (wholly or even largely partly) on Wright. Roark's architecture is more in the vein of the International Style (complete lack of ornamentation), and his life story varies considerably from Wright's. Touchstones are there, but there are many more that don't match. Interestingly, Wright rebuffed Rand's requests to interview him when she was working on the novel; they didn't meet to speak in detail until a year after publication. In a classic Wright move, Wright took issue that the hero (tall and red-headed) didn't look like him (given the subsequent success and influence of the book, I'm sure Wright secretly regretted not meeting with Rand when she first requested it).

Ayn Rand herself is quite interesting. Born in Russia in 1905, she experienced (and hated) the Bolshevik Revolution and the resulting socialism that confiscated her father's business causing them to nearly starve. Instead she advocated for rational and ethical egoism which encompassed atheism and laissez-faire capitalism. In short, she rebelled against anyone who would tell you what to do or what to think and believe, including government, church, and the press. Rand first came to New York for a "visit" in 1925. She quickly found her way to Los Angeles to work in Hollywood (Cecil B. DeMille gave her her first Hollywood job as an extra and script reader). "The Fountainhead", her first successful novel, allowed her to work on what many consider her masterpiece, "Atlas Shrugged".

She started "The Fountainhead" in 1935, and it was published in 1943 after being rejected by 12 publishers. Based on word of mouth, the book became a bestseller two years later.

I was not expecting to enjoy the book as much as I did. Architecture provides the backdrop for a lot of detailed philosophizing, but the plot amply pushes the dialog forward. Very few of the characters are endearing: it's like watching a demolition derby as different people move into each others spheres and mayhem erupts. I've read critical reviews about how Roark is naively idealized; however, many of the early Modern architects were just like Roark: unwilling to compromise and willing to flirt with poverty to maintain their ideals. But Roark does come off a bit one-dimensional as he stoically accepts every tragedy in his life. And the happy ending, the ultimate victory of the individual, is and would be, for most ideal individualists, unrealistic. Only the very fortunate go through life uncompromisingly.

Rand ultimately doesn't portray humanity pleasantly. Most people are slaves to public opinion, others are second-handers stealing the creativity of others, others are seeking to destroy the idea-makers, and yet others are manipulating the public and the people around them. It's not a pretty picture. But sadly there's a lot of truth in that picture.

As far as Modern architecture goes, Rand walked the talk. She and her husband bought the Von Sternburg house, designed by Neutra, in the early 1940s and lived there for several years. 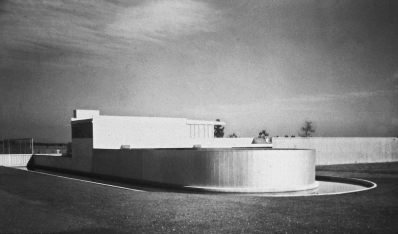 Later, Rand asked Wright to design a country cottage for her (design below; unbuilt). In what was probably a nod and a wink, Wright included a large fountain in the design... 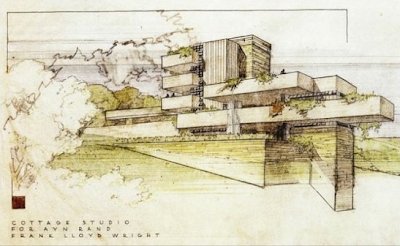