As the forming finished for the front of the house, I scratched my head. What's supporting the extension of the northern wall to the west? Shouldn't the foundation have a footing that extends out that way? (See red area in the diagram below which is looking down on the floor plan. The bottom figure shows the foundation plan.) 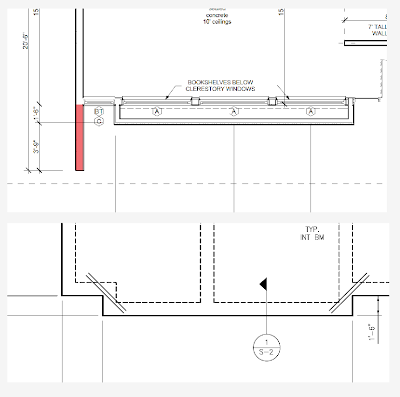 So I sent a note to the builder and architect: Shouldn't there be something there? The builder wrote back shortly thereafter (I swear the dude never sleeps!) explaining that they assumed that the wall cantilevers over the ground in that area. As evidence, he included this detail from the plans: 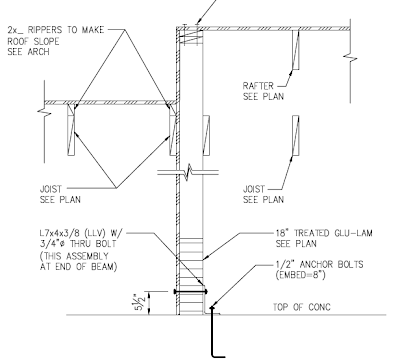 If you look closely at the bottom of the wall, there's something that says 18" TREATED GLU-LAM. Glu-Lam is basically a bunch of wood glued together to create a beam: 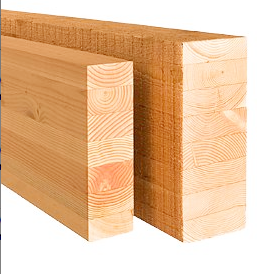 As indicated elsewhere in the plans, that beam runs the entire length of that wall. There ain't no other reason for doing that other than having a cantilever in that location. Sweet! That's a big woo! hoo! there.

Our two longtime readers may remember that the initial concept for the house looked like this (with a cantilever): 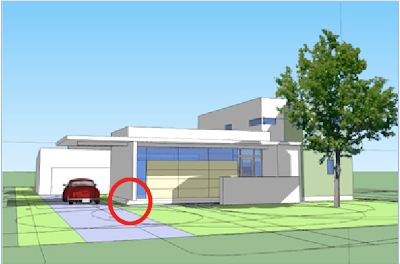 and then later changed to this (without a cantilever): 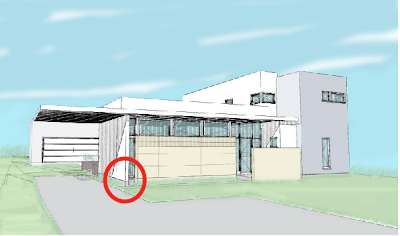 That and several other items resulted in us noting to the architects what we liked and didn't like about the later design, including a "like" on the cantilever of the previous design. However, it was unclear how the architects responded (our request was along the lines of "We like the cantilever better but understand if it can't be there because of structural reasons."), and since the above was the last 3-D realization, we assumed the cantilever was gone. It was a pleasant surprise to have it back!

So it was a boo boo on our part for asking about support for that wall. The good thing is that inquiry got a conversation going on how that Glu-Lam beam was attached to the foundation. Note the pink area below: 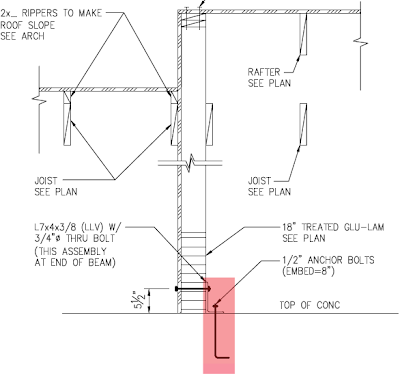 Yep: That's angle irons and bolts inside the house! This is why you should never let an engineer decorate your house. The builder noted that this (ahem) detail was strange. After discussions with the architect and the structural engineer (and a brief flirtation with bolts on the outside of the house), the builder suggested metal straps that extend out of the concrete and then are nailed to the beam. The engineer agreed, and now we have hidden fastening of the beam: a boo boo turned into a woo! hoo!

Very cool.
Posted by bubba of the bubbles at 6:42 PM