weather or not; drain pain; it's a gas gas gas; progress 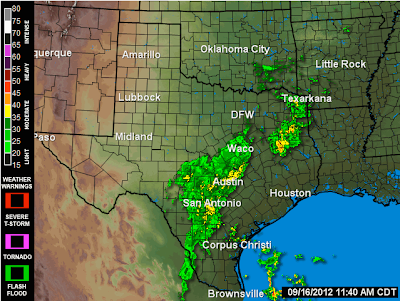 Back when we were looking at building the first house (remember?), I was (selfishly but mixedfeelingsly) pleased that we were entering a La Nina phase of the El Nino Southern Oscillation, a year-to-year variation of sea-surface temperatures in the equatorial region of the western Pacific Ocean (the cool kids call it ENSO). La Ninas (cooler-than-normal sea surface temps) tend to favor drier conditions in Texas, and drier conditions are better for building. Now we are entering an El Nino phase (warmer-than-normal sea surface temps). El Ninos correlate to wetter conditions in Texas. Rain is not good for building, at least the earlier phases of building.

I just so happened to meet the National Oceanic and Atmospheric Administration's ENSO expert earlier this week and asked him about the impending El Nino. He projected a weak El Nino this winter (an El Nino kicks in when sea surface temps are 0.5 degrees Celcius warmer than normal; we've been at this level for a couple months now). He said a weak El Nino portends wetter-than-normal conditions in the lower Rio Grande valley (think Brownsville), drier-than-normal conditions in West Texas, and mixed in-between. So we shall see. Although we're hoping for dry conditions until we get the house dried in, I'd sure like to see some rains in drouthy West Texas...

Laying the drain pipes for the house has been a pain, in part because the builder made an assumption on the depth of the city sewer line that turned out to be wrong. Typically (based on info from the builder and a pal of mine) city sewer is about 48 inches below the street. City sewer in front of our house is a mere 23 inches below street level. Given the length of our drain lines and the code requirements for the slope of such lines, we have to add another six inches to the height of the pad and raise the drain lines, all of which the builder has already done. 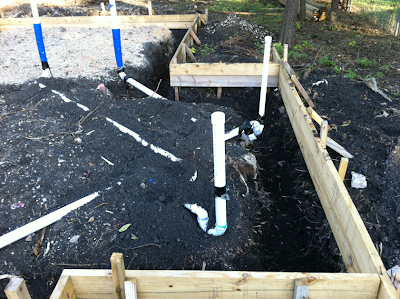 it's a gas gas gas

While digging the beams for the foundation, the builder ran across a couple gas lines. He was concerned about whether or not they were live, so I called the gas company. GasCo told me that they didn't have an active account for the address (of course) and that their files didn't show that natural gas had ever been used at that location (hmmmm....). They suggested that we call to get the location of their lines identified, but that wouldn't address whether or not the lines were capped at the street or somewheres unknown on the property. The builder dug up the lines today and found the ends, uncapped. That was the green light to cut into them.

After placing plastic liner over the soil, gravel, and sand and installing rebar, the garage foundation is ready to pour, which is expected to happen on Tuesday (yay!). Most of the forms for the house have been raised the aforementioned six inches and additional sand placed on the "pillows" (areas between the beams). They still need to place the plastic liner and the rebar, which will happen next week. The gravel, sand, and plastic provides a moisture barrier between the slab and the underlying sediment. The gravel and sand provide a capillary barrier between the soil and the concrete, but they're not perfect. The plastic "perfects" the seal. 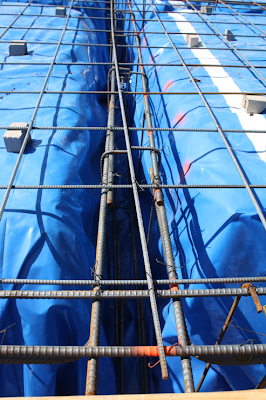 The builder is planning on pouring the house slab on Friday if the weather cooperates. What does the 10-day forecast look like? hammy..... 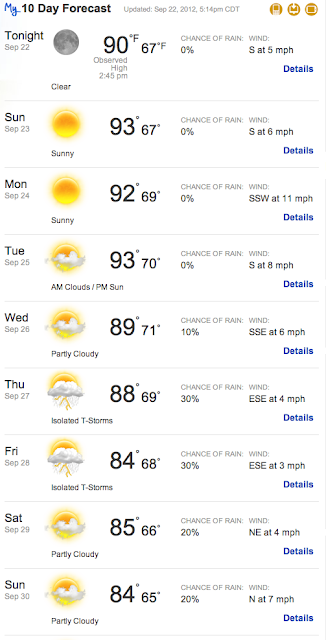 Posted by bubba of the bubbles at 6:24 PM