we have (partial) pad! 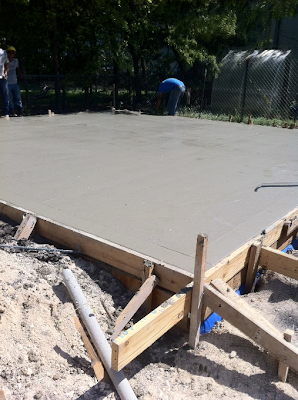 Hoop-doodled out to the lot over lunch to see some concrete, and I wasn't disappointed: We have garage slab! After I introduced myself as the homeowner, the concrete sub looked perplexed, telling me that someone else had been there earlier claiming to be the homeowner (there was a flash of Brokeback Mountain across his face...). "Was she good looking?" I asked, thinking the bride had stopped by. "Nope," he replied. "He was a he." Not only that, the "other homeowner" said he wanted the concrete pad to be smoothed, polished, stained, and scored. I said "Say what?"

After several phones calls and conversations, I "think" I know what happened. The concrete sub mistook the builder for the homeowner, and the builder said "We want the floor of the garage to be finished the same as the floor in the house." The sub then assumed that we were staining and scoring the concrete in the house (cause that's what "everyone" does with concrete, right? [answer: yes]), and it went from there. Just a wee glimpse into how things can get screwed up if given the chance (lots of our friends think its bizarre that we will have a straight-up polished concrete floor). 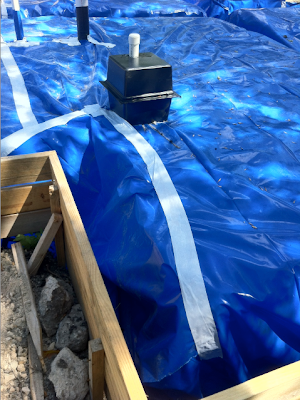 I was also happy to see that the drain for the master shower was moved to the correct location, this after three attempts to get it fixed (third time's a charm!). A couple things I learned after that: (1) when you think something is wrong, don't weasal-word it: be direct. I'm not an expert in this building stuff, so I have a tendency to mealy mouth communications: "Excuse me , dear sir: I may be wrong about this, I'm not a builder after all, but it appears the drain, the drain for the shower? in the master?, is not properly located." (followed by a pinky-extended sip of hot tea from a dainty teacup).  Better to boldly state: "You put the damn shower drain is in the wrong damn spot!" (OK, I didn't say the damns, but you get the point [sipping tea now...]). The other thing I learned is (2) to show a picture (see below) so they can see exactly what you're talking about. On my second attempt to get the issue addressed, I noted that the drain was placed 22 inches from the outer wall when it needed to be 78 inches from the wall, and that didn't work. But the picture worked. So now we know. 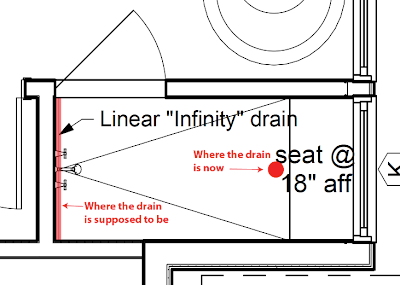