new construction in our part of Allandale 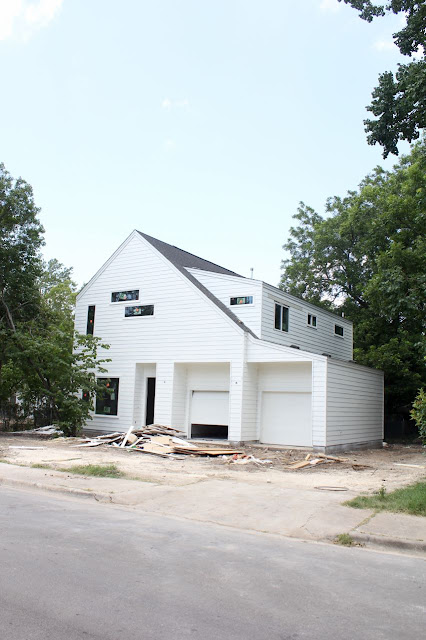 There's a bit of new construction along and near our street (with more on the way). With the real estate market back into crazy mode, the scrapers have been buying up properties in the $300,000 range, scraping the existing house, and building anew. For the most part, the new housing going up is architecturally uninspired (especially north of 2222), essentially Round Rock tract homes sadly plopped into the neighborhood.

The above house, just a few lots down from us, is an exception. Since it's not exactly traditional and not exactly modern, let's call it contemporary. The original site plans called for putting two houses on that lot before the city kiboshed it for not having the proper zoning (and good luck getting that zoning changed in this 'hood!). I give it an A for effort: it's a conventionally constructed spec home, but it has a wee bit of modernism tucked into it with window dimensions and placement. I suspect the retreat from two houses to one on that lot has greatly impacted the build budget for the project.

It's been interesting watching it go up during the torrential rains: it's a humid hothouse in there now as  it slowly dries out. And nothing makes you appreciate your builder more than seeing a spec house go up... 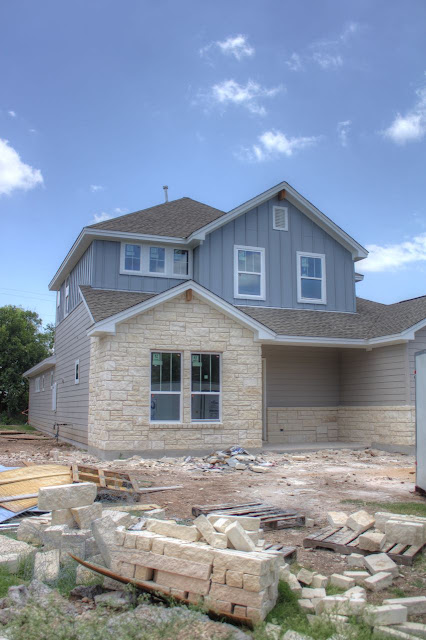 A little further down the street is this Round Rock plopper, a house that is showing up all over the neighborhood with a few variations. We don't quite get the color palette here, but, even more troubling, is the classic suburbanistic lack of recognition of solar orientation. This house gets plopped on the lot regardless of which way the sun hits it. Why don't these developers have their architects design four houses for each orientation? The facade above is facing west. The western and southern facades have the most windows. The left side above is facing north, where the best light is in this southern climate, and there are hardly any windows.

Both of these houses have a shocking lack of windows in the kitchen (is this a new trend?). Here's the kitchen in the Round Rock plopper: 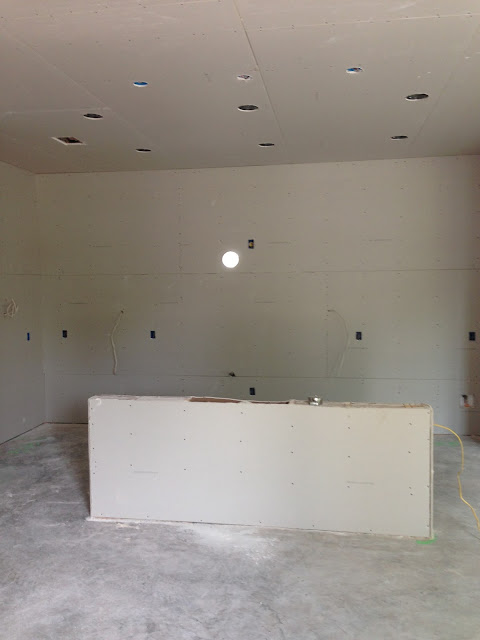 That's right: not a single freaking window! And that wall is facing north, a perfect location for daylighting via clerestories.

Here'e the kitchen in the contemporary: 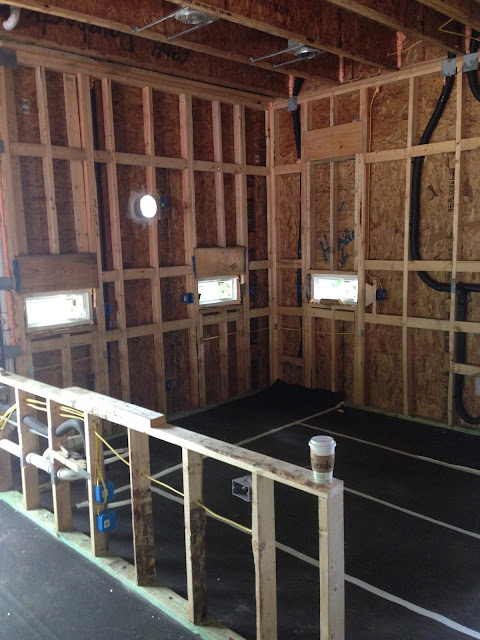 Not as bad as the plopper since there are some windows, but, wow, that's it: three tiny counter-top windows. The far right wall was initially framed for a larger window (note the header), but for some reason they placed a small window there instead. And what a waste of a corner...

Continuing down the street there's Yard Bar, the conversion of an old putt-putt golf course into a private dog park with (ahem) a bar. With the giant mixed-use project going up across the street (more on that later), this is rather brilliant. Walk your dog while drinking a beer! The bride is looking forward to the opportunity to imbibe and mingle with other people's pooches.

We're digging the design by designtrait, but I'm not sure about that blue and how it relates to the cedar. Nonetheless, this is a pleasant modern design with gorgeous cantilevered canopies. 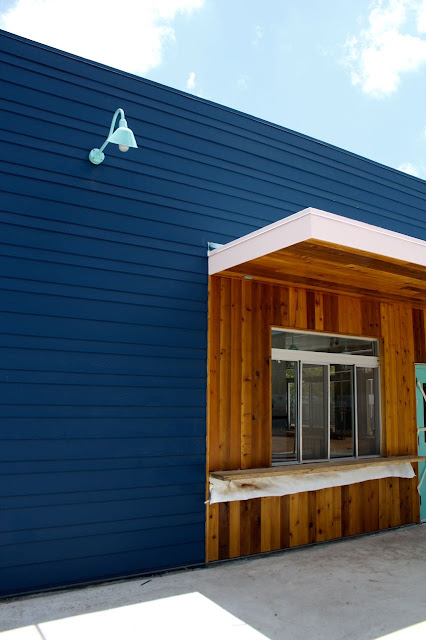 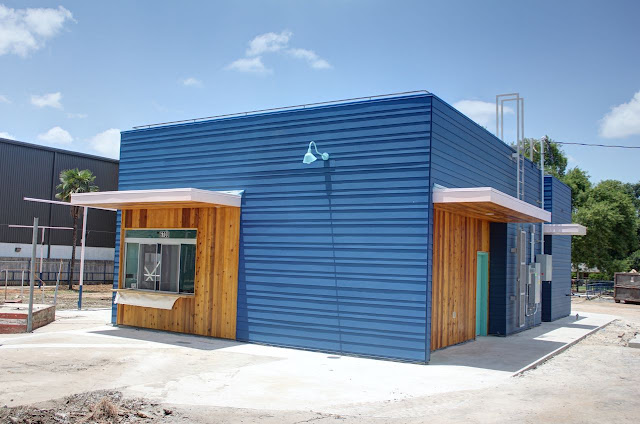 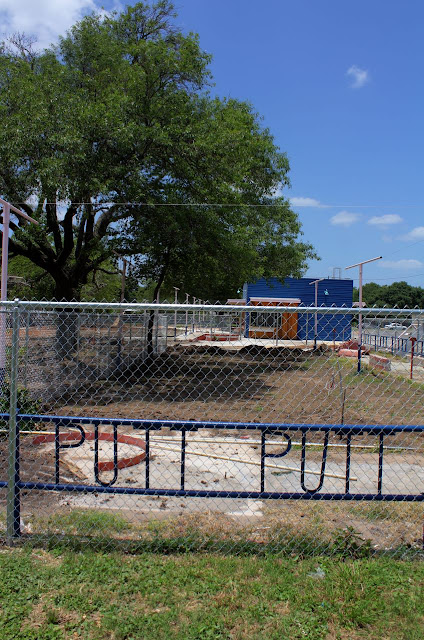 And here's the mixed use going up across the street. Many in the neighed are in a tizzy about the mixed-use developments going up along Burnet, but we are down with it. These projects are going to bring the street to life with people, restaurants, and bars. Yes, there will be more traffic, but I for one am willing to put up with more traffic if there's more fun to go along with it. 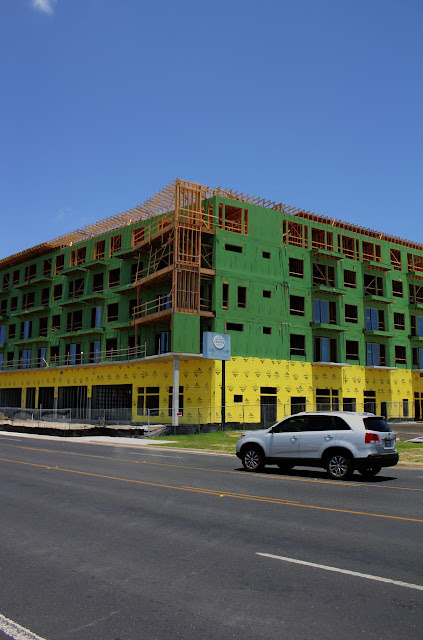 And looky here, just as I was saying, right next door will be three awesome food places: Barley Swine (we are grunting like pigs over this!), lick ice creams, and Bufalina Due (pizza!). With the recent sale of the Dallas Nightclub property to the north of here (almost assuredly more mixed use), we will see more and more cool restaurants and pubs going in.

Can I get an amen? 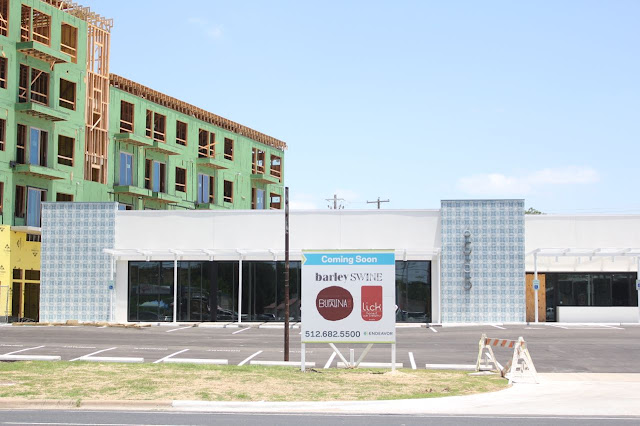 Email ThisBlogThis!Share to TwitterShare to FacebookShare to Pinterest
Labels: Allandale