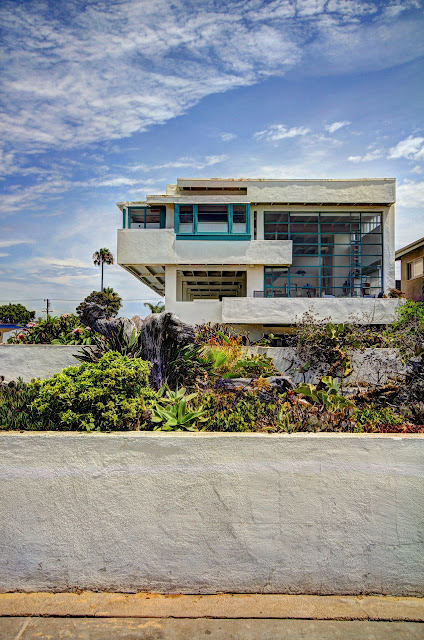 While figuring out what to do in San Diego between visits to the zoos, I stumbled upon a street art festival going on in Long Beach that featured one of our favorite graffiti artists, Fafi. Added bonus? The trip to Long Beach would take us right past R.M. Schindler's Lovell Beach House in Newport Beach! I was excited to apply a new (since my last trip to Newport Beach) wide-angle lens to capture the house. The weather and the sky were glorious, as was the house.

There were a couple things I wanted to focus on during this visit: (1) the northern facade (I read that it is rarely photographed) and (2) the modifications to the building.

So here's the single non-street side/non-public side of the beach house from two different perspectives: 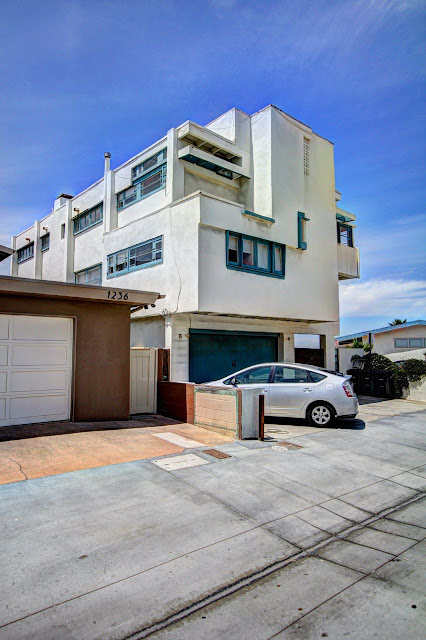 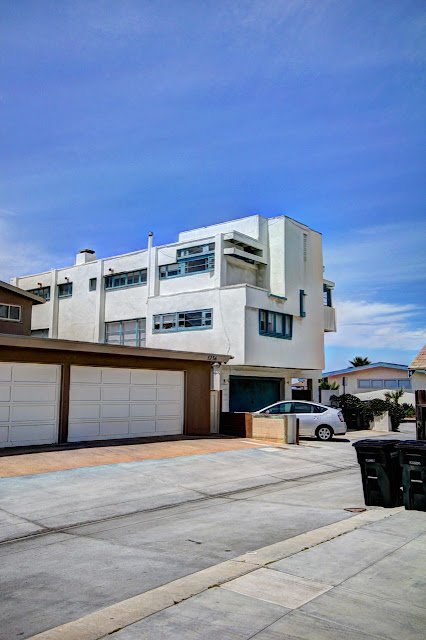 You can see all four floors of the beach house from this perspective: (1) the first level that contains the garage and later-added (by Schindler) apartment, (2) the second level that holds the living rooms and maid quarters, (3) the bedroom level, and (4) the nude sunbathing roof deck.

The north side (the side that's facing the brown building) is relatively unchanged, at least window-wise. The larger windows, originally wood, appear to have been replaced with steel (with alterations to the panes). There was also a wrap-around-the-corner window on the second floor corner visible in the photo above.

Here's the location of the missing corner window: 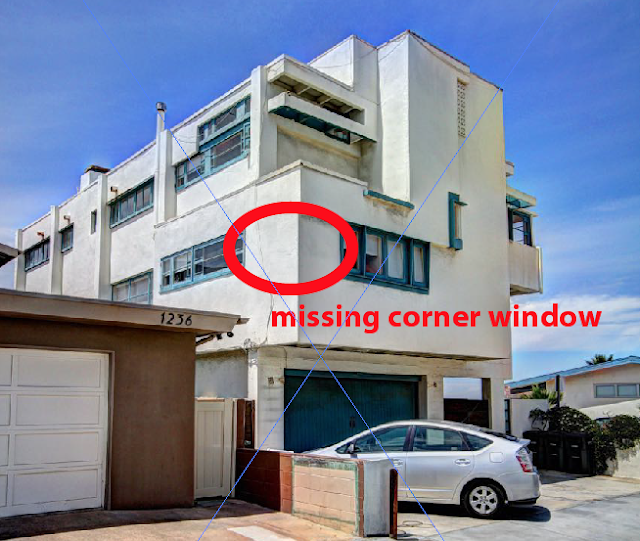 You can see the stairs and balcony on the lower-right side toward the back of the building in the photo below: 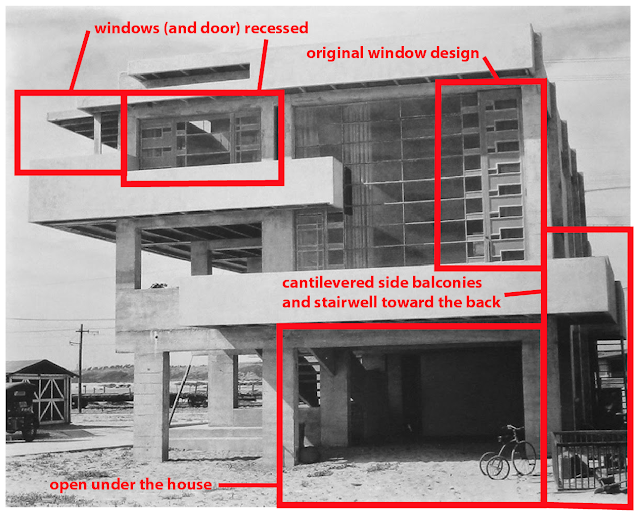 The stairwell, the rear balcony, and the balcony toward the front were shaved off after the Lovells sold the lot to the north (a damn shame: the building is still gorgeous, but it loses some of that de Stijl sliding-plane action with the truncations).

Here's a couple drawings from Popular Mechanics showing the back (service) staircase as well as the cantilevered balconies: 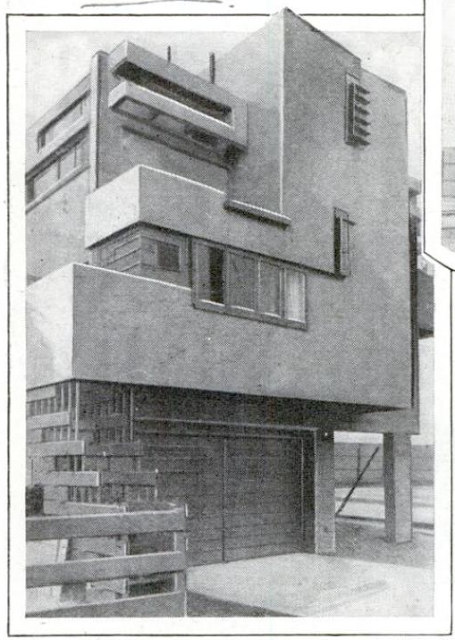 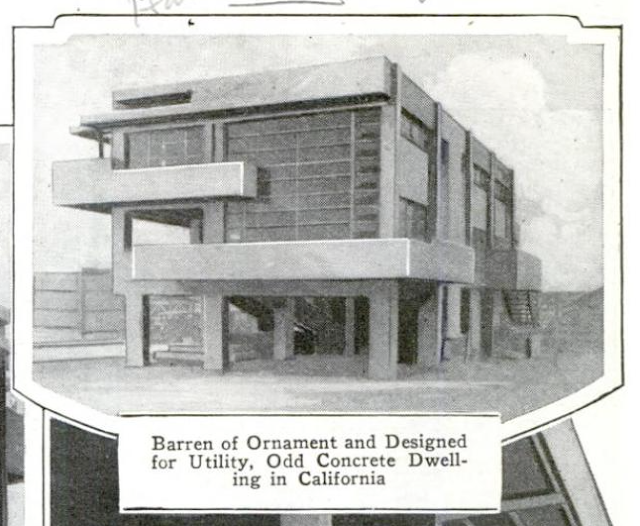 Here's the original site plan when both lots were part of the property. The diagram below shows what part of the lot was sold (shaded green) and what parts of the house were shaved off (shaded red): 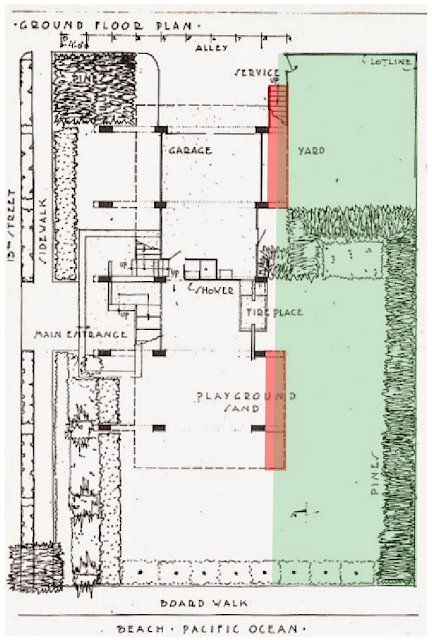 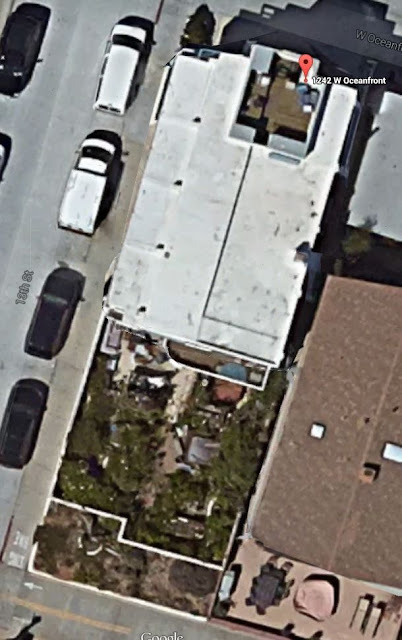 The sundeck was nicely walled in to prevent unwanted onlookers from "junk" shopping. You can also see how close the neighbor's house is to the property.

I'm particularly fond of the "back-side" of the property, the side that faces the alley. It's relatively unchanged from the original except for the aforementioned stairs and side-balcony and wraparound window on the second floor. Also different is the ventilation window on the upper sunbathing level, currently filled in with ornamental cinder blocks; the original design appears to envision louvres. 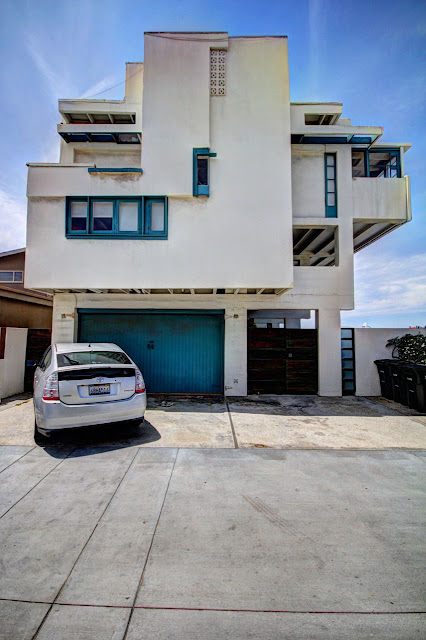 Close up of the current window treatment: 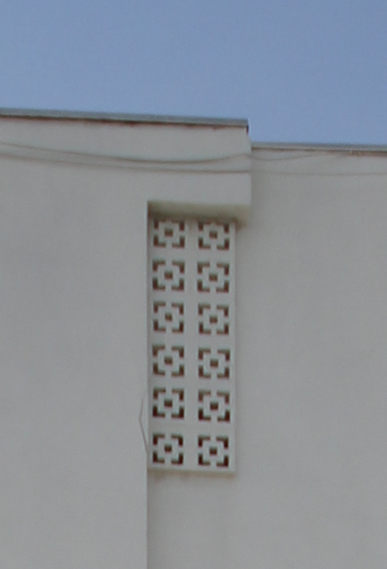 And here's a close-up of the window as shown in the Popular Mechanics drawing:

Here's a detail of the main entry from the street: 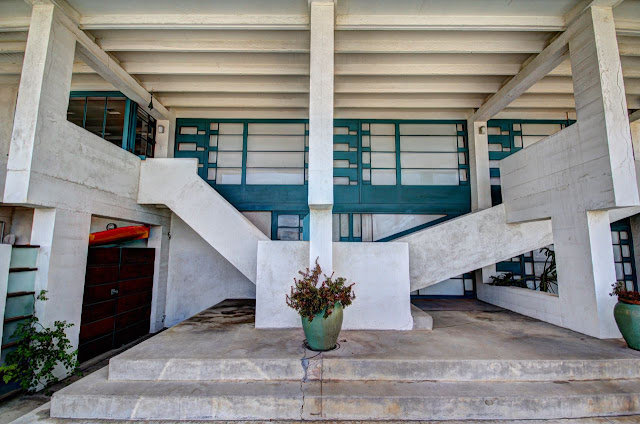 There are two stairways here, a steeper one to the left and a less steep one to the right. The stairway on the right is the formal entry that empties onto the front balcony and living room while the stairway on the left is less formal and empties onto a shaded balcony with access to the dining room, the kitchen, the second floor bathroom, and the stairwell to the third floor.

This part of the house is relatively unchanged except for (1) the concrete piers/frames are painted (they were originally raw concrete), (2) the balcony at the top of the left stairway has now been enclosed (appears to be post-Schindler based on the window style), and (3) the ground floor  (everything to the right of the center pillar above) has been finished into an apartment (this was done later by Schindler at the request of the Lovells).

Stepping back a bit, here's what the street facade looks like: 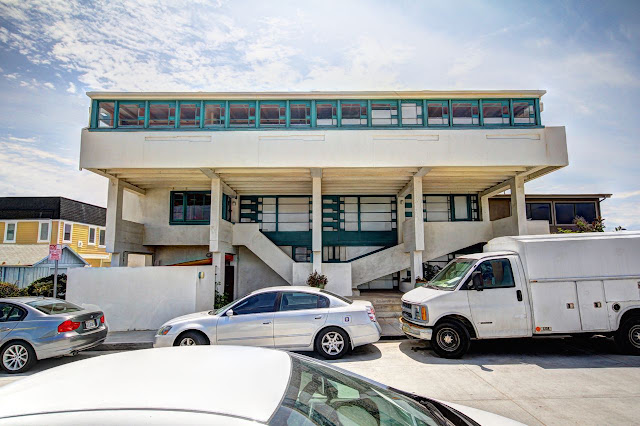 The primary change here is that the open porch on the third floor, intended for outdoor sleeping, has been enclosed, something Schindler did for the Lovells at a later date.

Here's a photo of what that part of the house looked like back in the day: 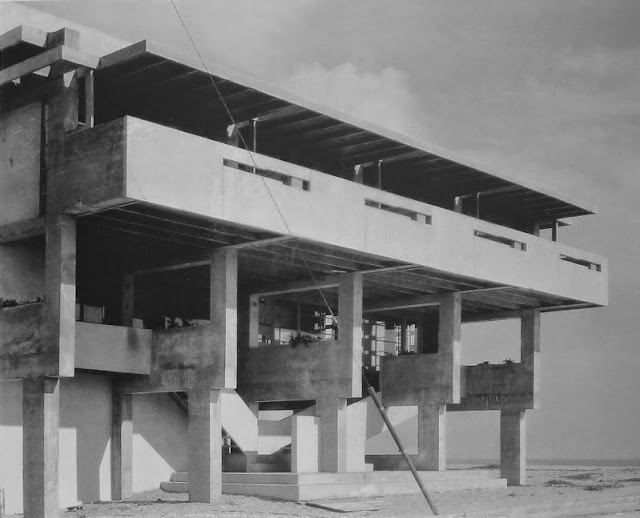 Schindler's original aesthetic vision for the house is clearly superior to the subsequent modifications; however, Schindler ultimately valued function over form and happily modified his work to meet the changing needs of his clients.

The beach-front side of the house has also undergone some modifications:

Again, the aesthetics worked better as originally designed; however, the house still retains much of the original design and early modern charm. The current owner, a Lovell descendant, has been a good steward of the house. 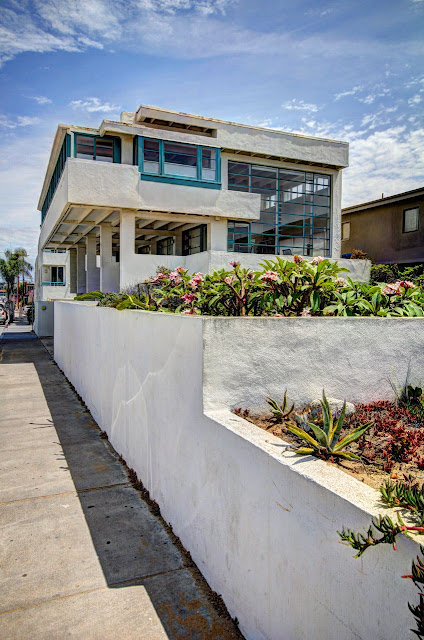 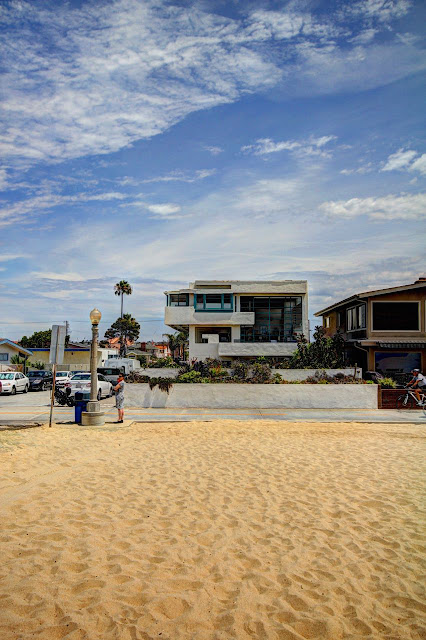 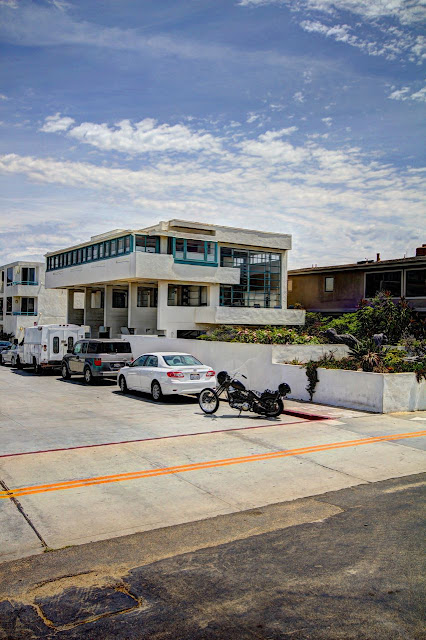 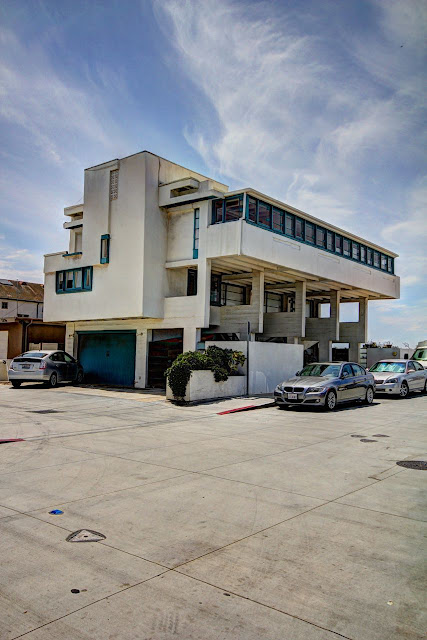 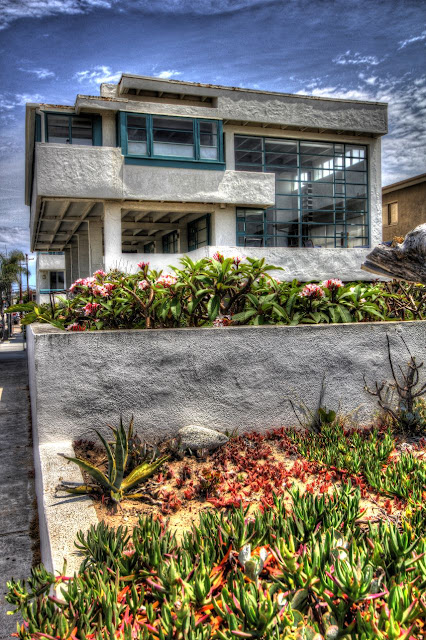 I wasn't trying to peek inside the house while we were there, but I noticed that the beach front photos showed a tiny bit of the interior, which looks unchanged from the original design. 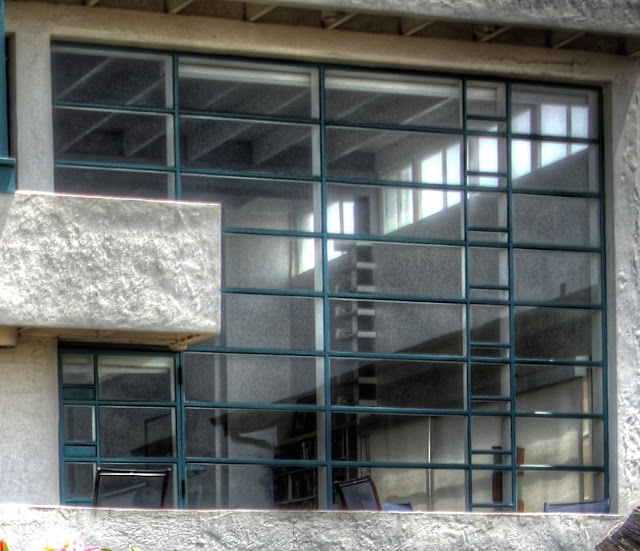 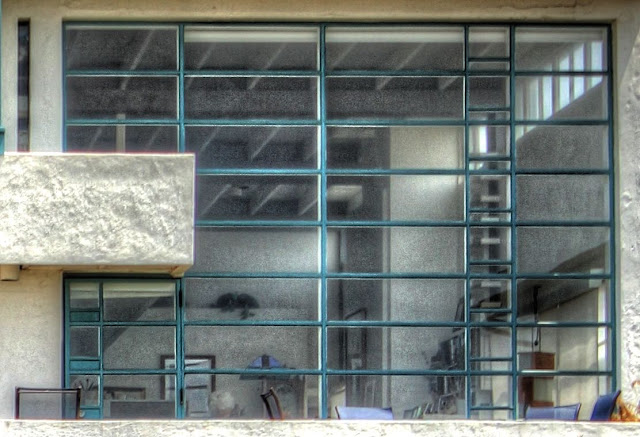 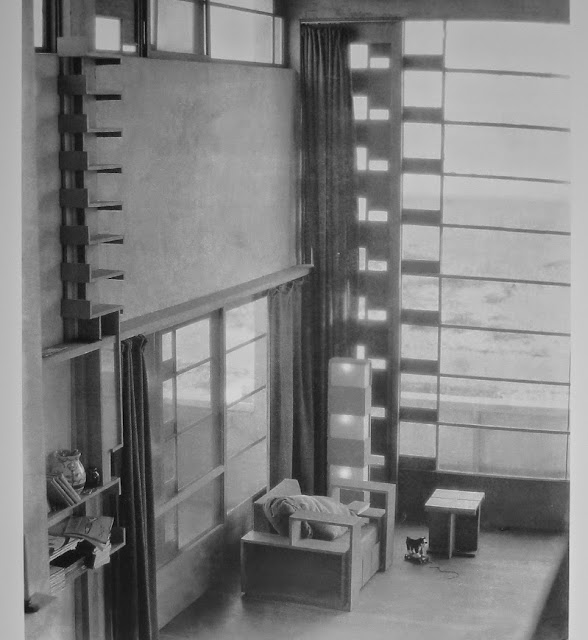 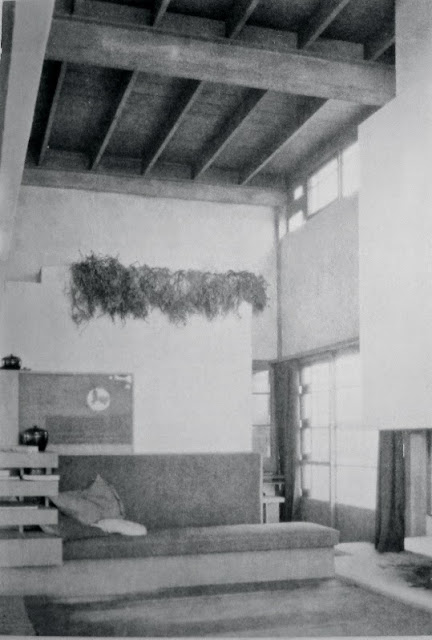 And in the process of putting together this post, I noticed that one photo showed the clerestory windows in the bedrooms, which can't be seen from street level (look in the room and see the light): 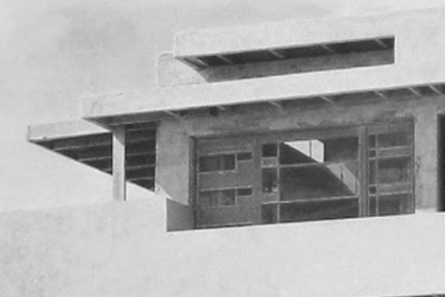 Hopefully someday we will be able to tour the interior...
Posted by bubba of the bubbles at 2:48 PM