haiku for the book "Lilly Reich: Designer and Architect" by MoMA 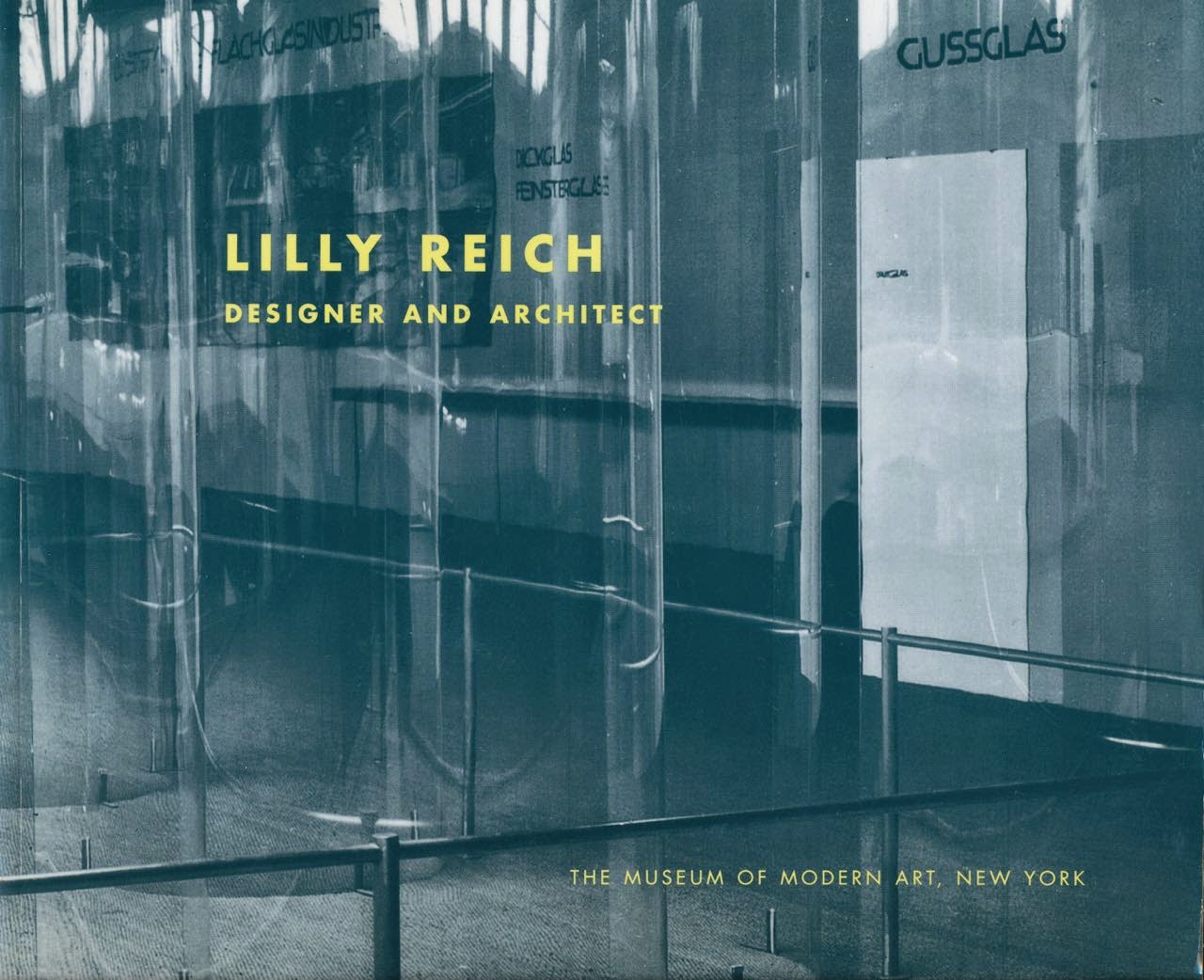 brilliant design
and a partner with Mies, but
always a shadow


This whisper of a book (clocking in at a mere 64 pages) is almost all there is book-wise about Lilly Reich, an important collaborator of Ludwig Mies van der Rohe during the first part of his Modernist career. A companion to the 1996 Museum of Modern Art show on Lilly, the book contains two essays, one by Matilda McQuaid and another by Magdalena Droste; even the essays overlap substantially. Nonetheless, if you are seeking to better understand Lilly's life and her role and contribution to Modernism, this is a worthwhile read (and the photos are fantastic).

Being a Modern girl back in the early days of Modernism was not easy. Women were expected to stay at home and keep house, and if they ventured out into the design world, they were expected to stay focused on interiors. Several ways women became somewhat prominent in those times was coming from money (your family could support your "hobby") and/or hooking up with a male professionally and/or personally where your contributions could comfortably be nestled with your associated male partner (giving the chauvinists plausible deniability of where the designs actually came from). A daughter of a prosperous family and companion of Mies, Lilly did a little bit of both.

For her formal education, Lilly studied under Else Oppler-Legbrand, who had studied with Henry van de Velde. Also teaching at the school (Höhere Fachschule für Dekorationskunst) were Hermann Muthesius, Peter Behrens, and Richard F.L. Schulz. After schooling, Lilly then opened up her own design shop, mostly focused on textiles, clothes, furniture, and interiors. She became a member of the German Werkbund, an association of German craftsmen and predecessor of the Bauhaus, in 1912. Through her formidable organizational skills, she was elected to the board of directors of the Werkbund in 1920, the first woman to do so.

The goal of the Werkbund was to create partnerships between designers, craftsmen, and manufacturers to bring German design to the world. To help achieve this goal, the Werkbund organized exhibitions, and Lilly proved to be great at organizing and designing these complicated and grand events. Lilly first corresponded with Mies in 1924, but their first collaboration came with the famous Werkbund exhibition called "The Dwelling" in Stuttgart in 1927, the same exhibition that hosted the construction of the Weissenhof Estate. In Hall 4, the Plateglass Hall, Mies and Lilly jointly designed furniture (the hall also included a desk of Lilly's design).

They later collaborated on the Velvet and Silk Cafe at a women's fashion exhibit in 1927, the Barcelona Pavilion in 1929, at the International Exhibit in 1929, and with the Tungendhat House completed in 1930. At "The Dwelling of Our Time" exhibit in Berlin in 1931, two houses--one designed by Lilly, the other by Mies-- were built for display, connected by a long wall that pierced the heart of Mies' contribution, something of a symbol of their personal and professional relationship, linked yet still separate, each with their own ideas. From 1932 to 1933, Lilly taught weaving and interior design at the Bauhaus while Mies was the director; however, the ascendant Nazi party shut it down. The Werkbund was also essentially shuttered after the Nazis took control of it in 1933.

Mies finally left Germany to teach in Chicago in 1937. Lilly visited in 1939, but did not emigrate to America for unknown reasons. When the war started, she safely stashed Mies's papers in East Germany; however, her studio and much of her own papers were destroyed after the bombing of Berlin in 1943 (hence the thinness of our knowledge of Lilly's contributions). After the war, Lilly continued to design furniture and helped restart the Werkbund in 1945. However, shortly thereafter, she became ill and passed away in 1947.

Her legacy is mostly known through furniture design, namely the Barcelona Chair, designed jointly with Mies, and the Brno Chair, again designed jointly with Mies. Less known is that she made key contributions in the design and development of the Barcelona Pavilion and the Tungendhat House, influential early icons of Modernism. And even less known are her contributions to Modern exhibition design: in every curtained partition you are seeing a wee bit of Lilly. Her legacy is also savings Mies's papers, which were not liberated from East Germany until 1964. If not for Lilly, much less would be known about Mies's early years as a Modernist.

Thanks to the bride for this Christmas gift! 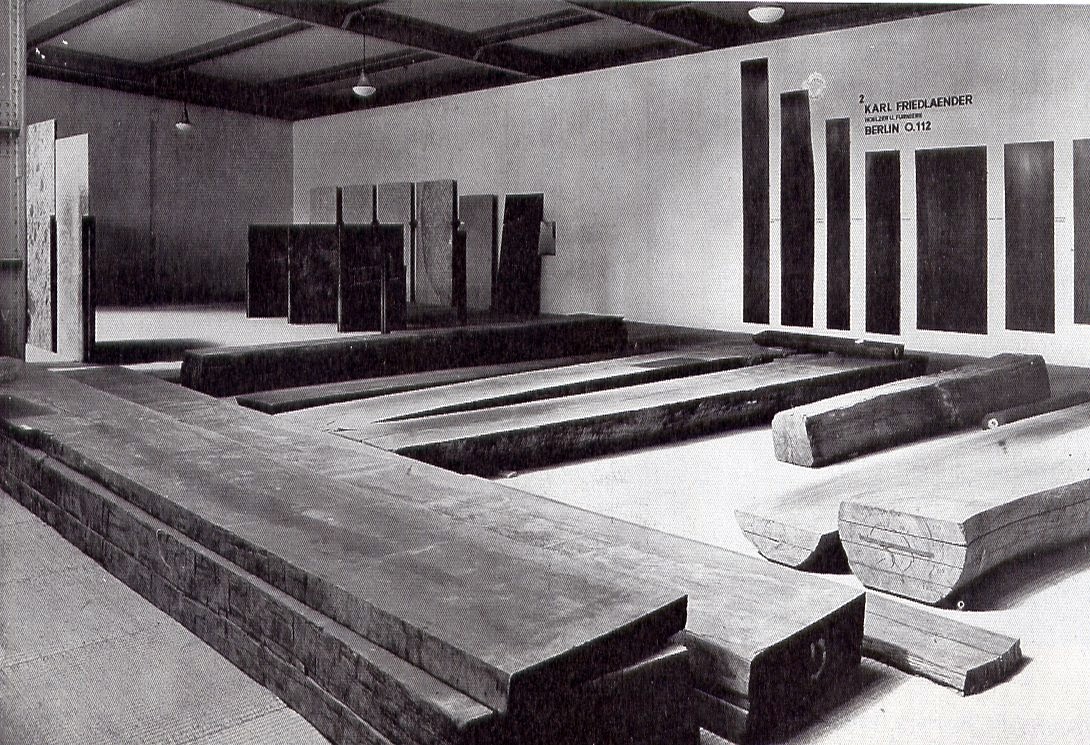 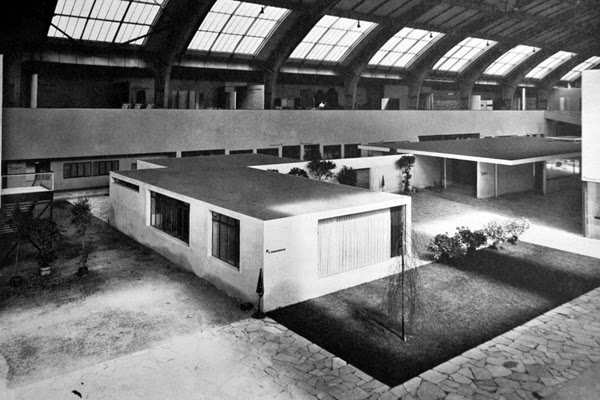 Two houses at "The Dwelling of Our Time" exhibit in Berlin in 1931, the front house (Ground-Floor House) designed by Lilly Reich and the rear house by Mies van der Rohe. The houses were connected by a wall. 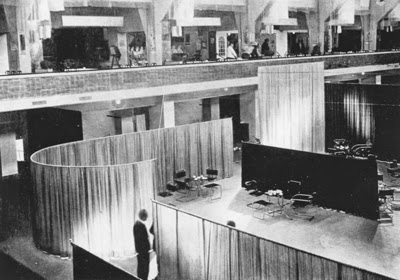 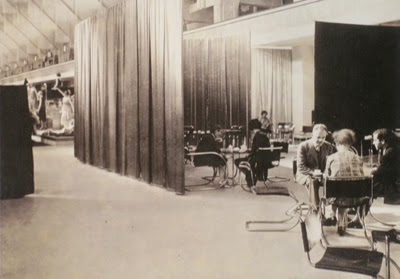 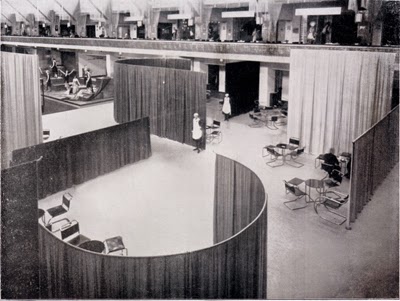 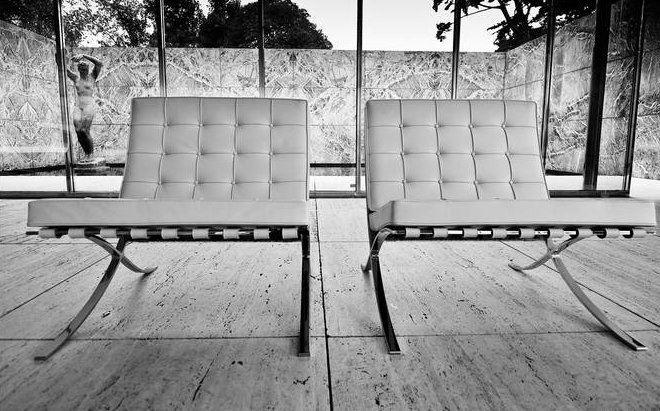 Barcelona chairs at the Barcelona Pavilion (1929) 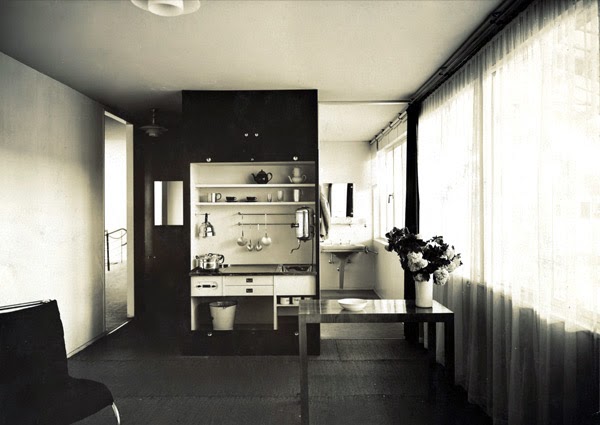 Lilly Reich designed apartment, furniture, and compact (and hide-able) kitchen ("The Dwelling of Our Time" Exhibition, 1931) 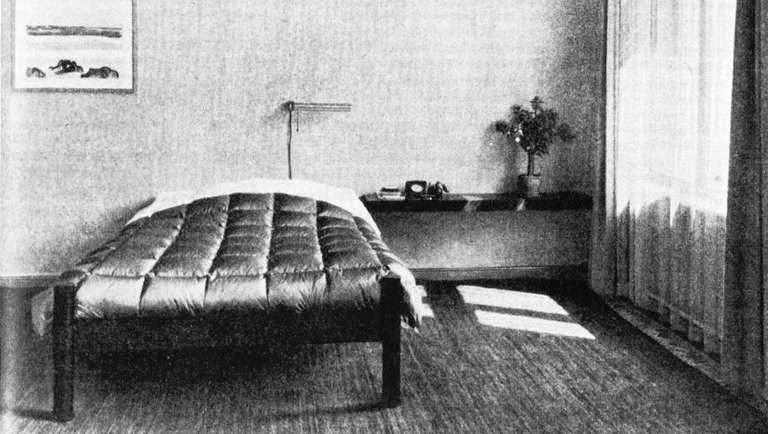 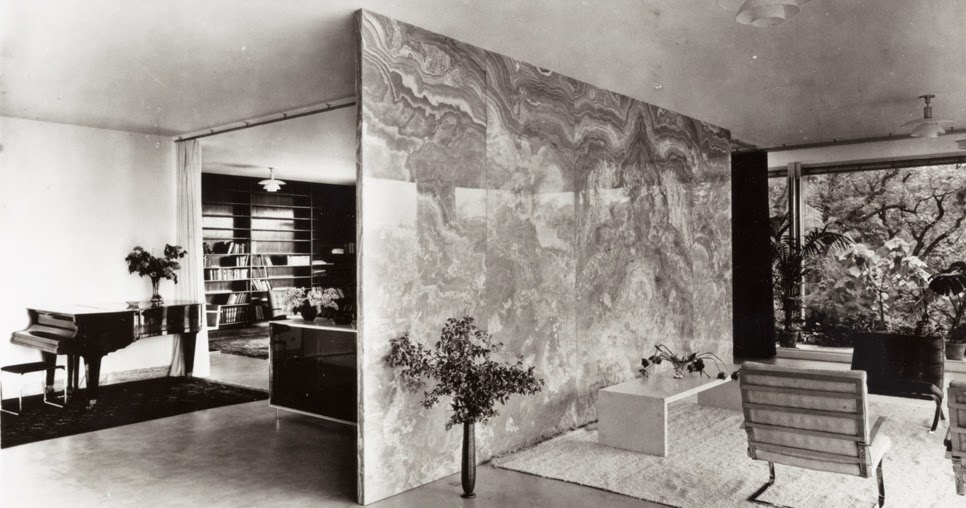 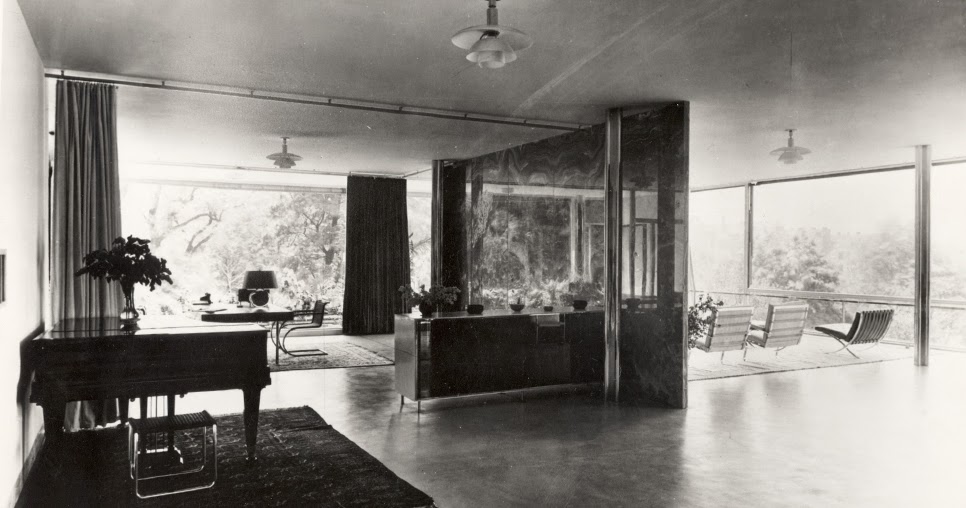 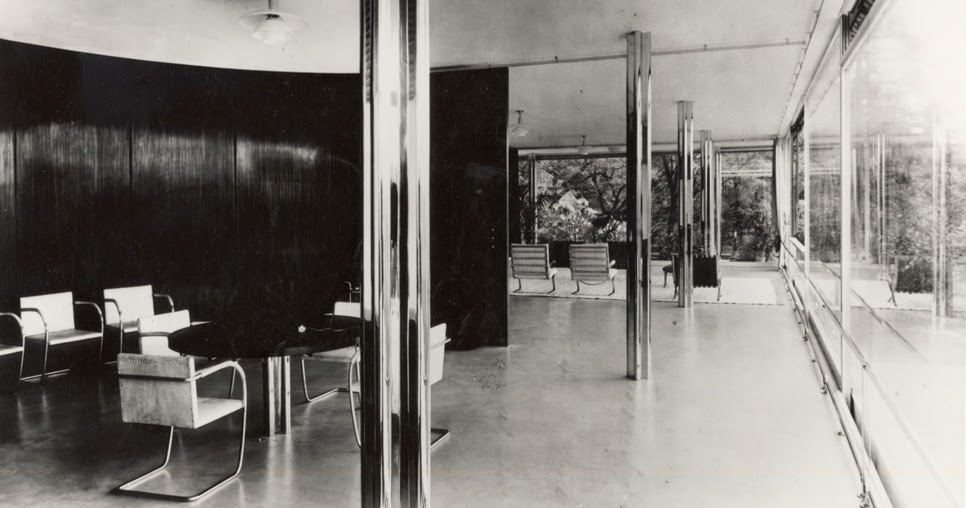 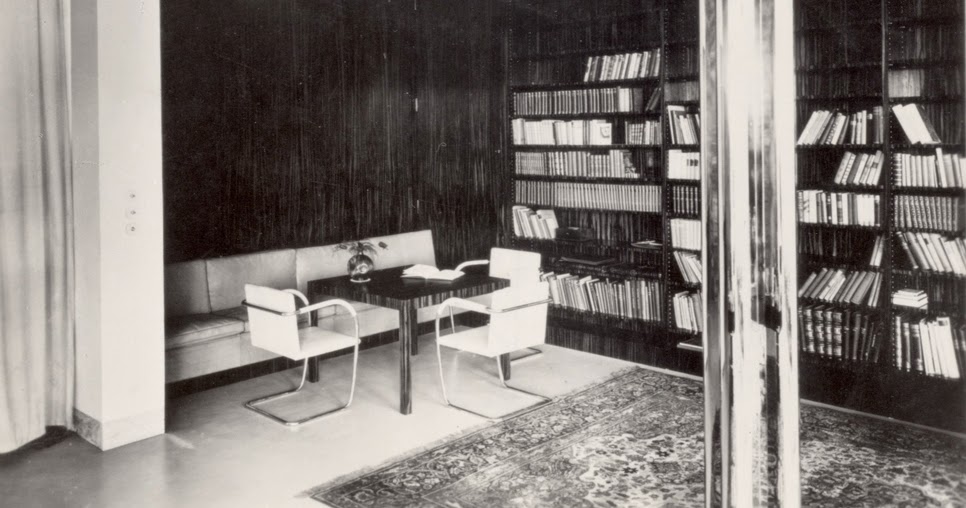 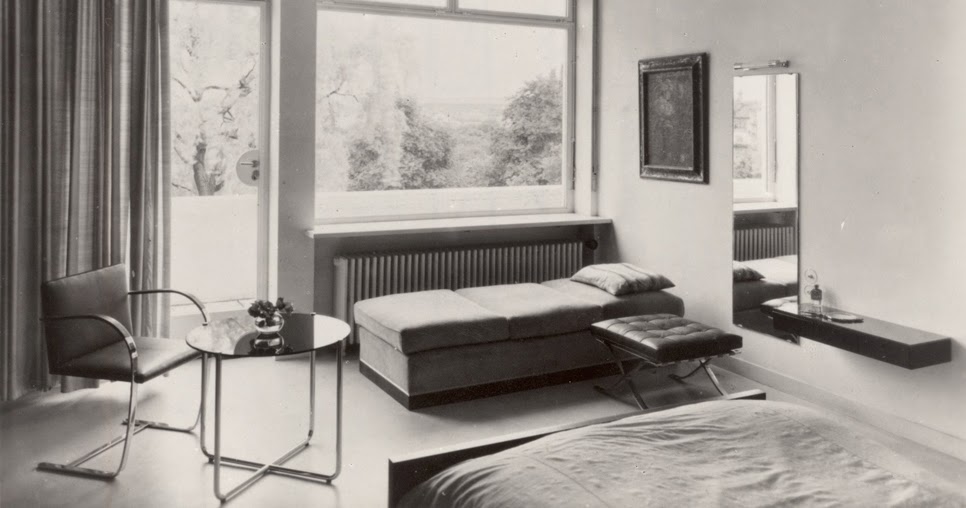 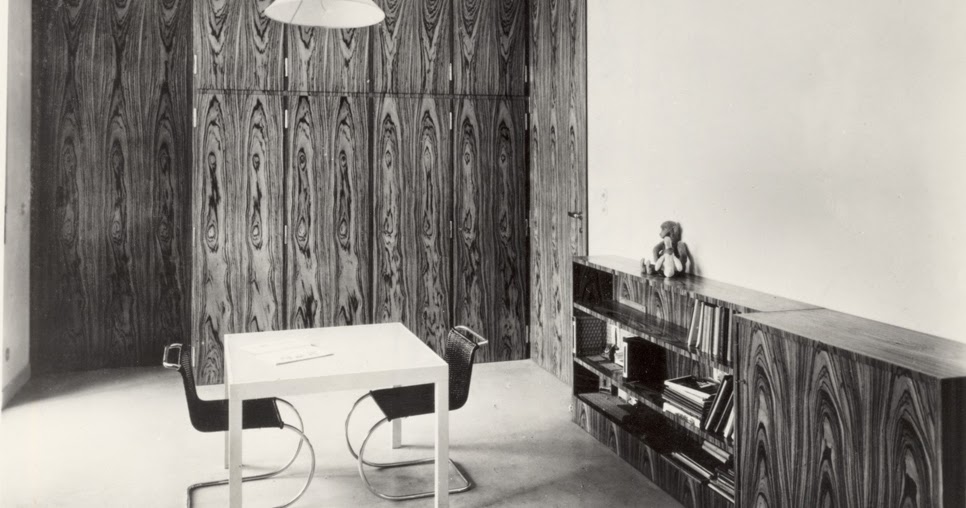 Interior and furniture design at the Tugendhat House (1930) 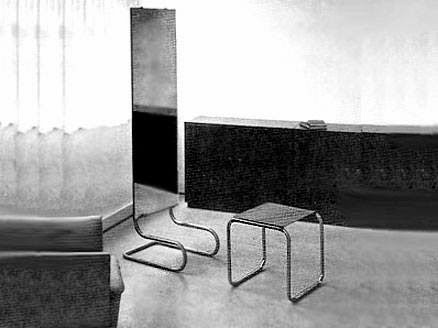 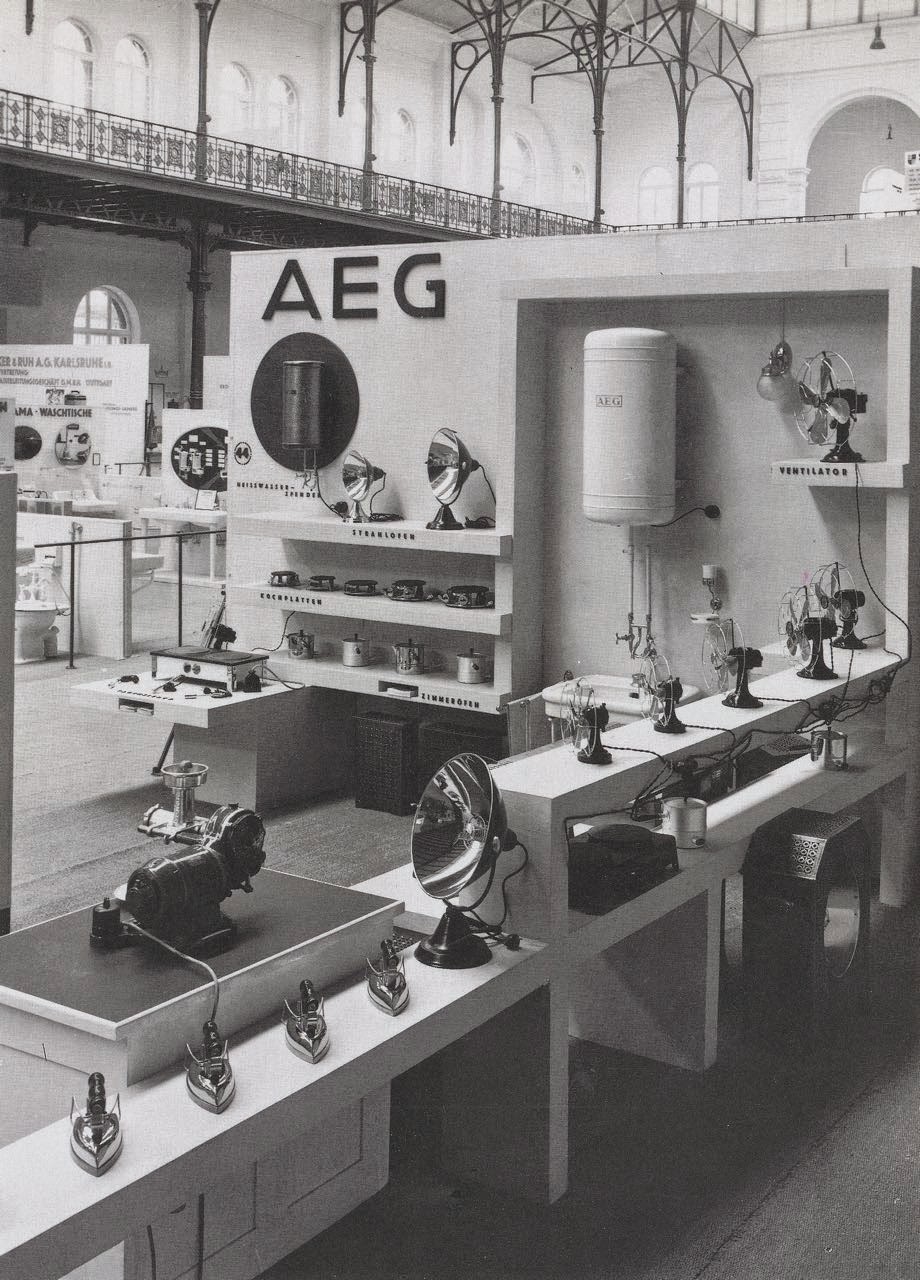 AEG display at "The Dwelling" Exhibition in Stuttgart (1927) 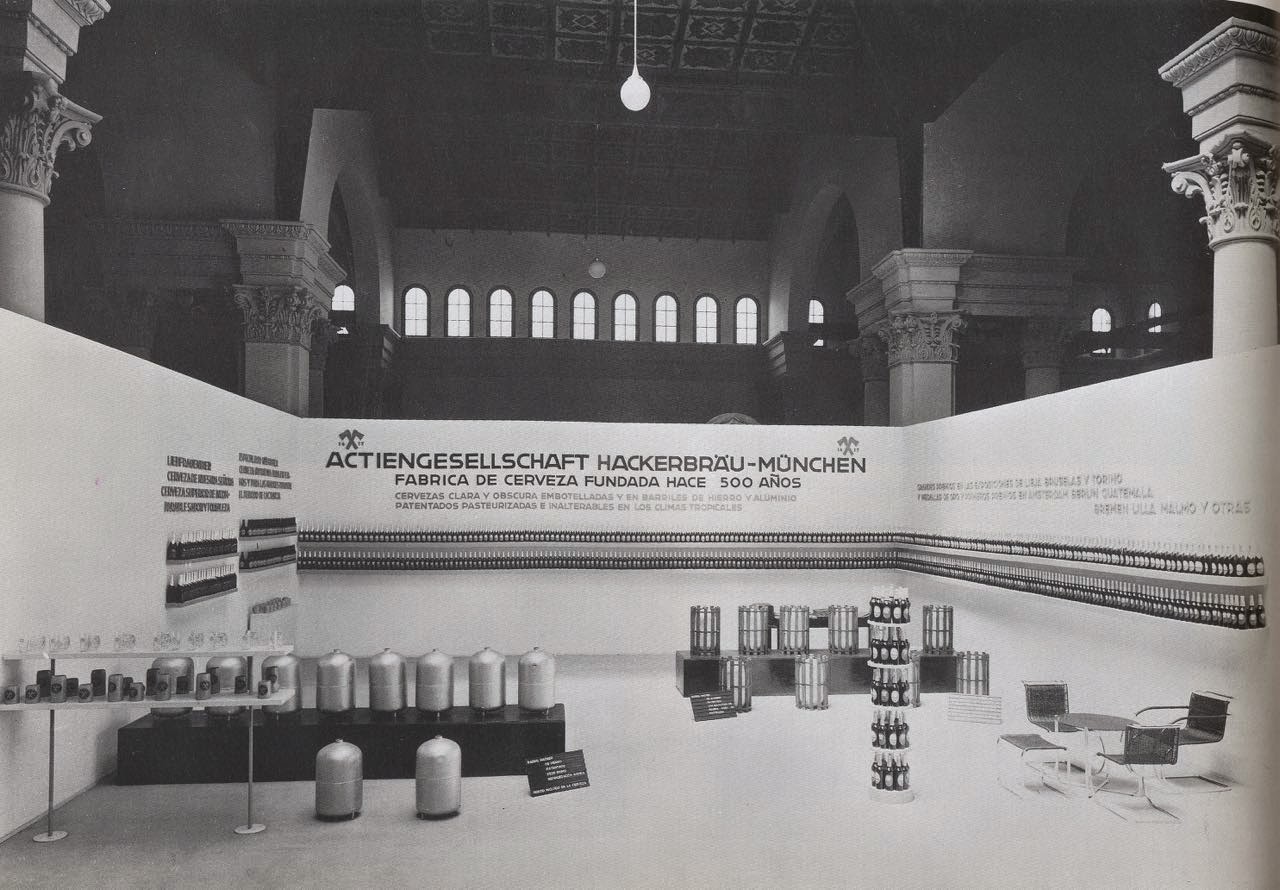 99 bottles of beer on the wall... International Exhibition in Barcelona (1929)