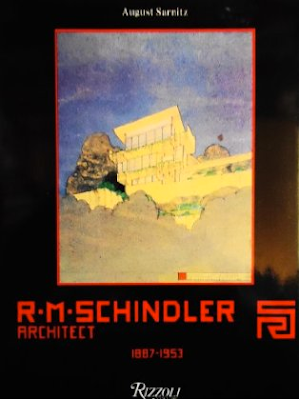 I have a troll set up in Ebay to find Schindler items and recently scored a couple of older books focused on Schindler. Being out of print and not big sellers when they were originally published, these books can be rather expensive; but I got a couple at "half price"!

Didn't read much online about this book, perhaps because it's really only of value to hardcore fans and scholars of Schindler. And the text is tiny, somewhere between 8 and 9 point! About 30 of the 224 pages are written by the Austrian author with the rest of the book a compilation of various items. Although it's interesting to read yet another analysis of Schindler's work, I didn't get much of of this one. The real gem in this book is that it compiles all of Schindler's published (and unpublished) writings as well as a number of letters.

It's been remarked that Schindler took unusual care to maintain and organize his papers through his career. Although it's sad he only received limited recognition during his lifetime, he was convinced that history would look kindly upon him. In that, he was correct. In a letter to the Architectural Forum in 1947 in response to an article about contemporary home architecture, he noted that two of his houses (Lovell Beach House and the Schindler-Chace House) predated the earliest work of Corbusier and Neutra highlighted by the article:

I built my own house in 1922, and it has become the prototype for most of the now fashionable California houses. It introduced the following characteristic features:

A cellarless, rambling, one-story building low on the ground, the floor extending without steps into the garden.

A full-height glass wall with large sliding doors on the patio side, under ample overhangs.

A solid back wall for privacy, and movable partitions for flexibility.

Schindler's earliest published writings (barring an editorial in 1922 about architecture and Hollywood) were done as a guest columnist for Philip Lovell in the L.A. times in 1926. In this series of columns, Schindler wrote about the various design elements of a house and how these elements should and could be directed toward healthy living. We got a particular chuckle of amazement on Schindler's thoughts about ventilation:

The house of the future will abandon the present window [as the sole source of ventilation] and provide separate systems of openings for air and light.

The dude was ahead of his time.