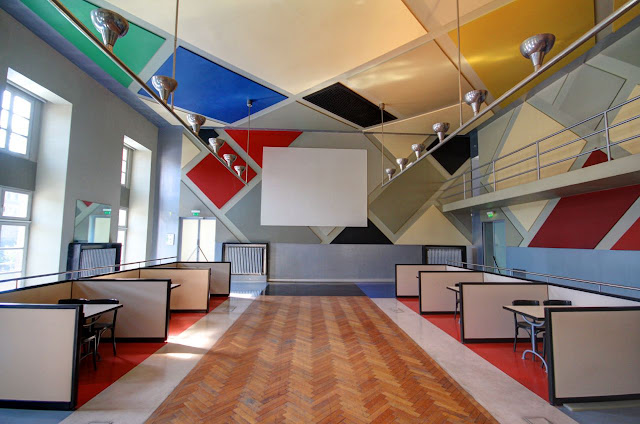 When first entering Place Kleber, a large plaza in the center of Strasbourg, there is nothing to suggest that a vivid de Stijl masterpiece lurks behind the Baroque facade of l'Aubette, a long brownstone building designed in 1767 by Francois Blondel (aka "The Straightener").

By the early 1900s, l'Aubette was tired. The locals hired Theo van Doesburg in 1926 to re-envision the interior space. van Doesburg started a partnership with local Dadaists Jean Arp and Sophie Tauber to redesign and redecorate parts of l'Aubette, including a cafe, tea room, two bars, billiard rooms, two banquet halls, kitchens, offices, and staff quarters. The designers divvied up the various rooms to express their ideas within their assigned walls.

van Doesburg chose the entry, dancehall, one of the bars, and cine-cafe and to demonstrate his vision of Elementarism on the walls, floors, and ceilings. As a result, he created a walk-in Mondrian painting (or, more accurately, a walk-in van Doesburg painting; Mondrian was part of van Doesburg's de Stijl movement and become far more famous).

Completed in 1928, van Doesburg's redesign lasted only a decade before the city commissioned another redesign. After van Doesburg's interiors became lauded as a masterpiece of de Stijl architecture and early Modernist design, Strasbourg restored the cine-cafe back to its full neoplastic glory by the mid-1990s. The city carefully recreated the dancehall and the bar and added them to the exhibit by 2006. Sadly, but understandably, the only rooms the city have restored are van Doesburg's; Arp's and Tauber's work, important but not important enough, is only represented through photos.

This all-encompassing architectural space is well worth the visit. Hours are limited and restricted to days toward the end of the week, but admission is free. If you want the place more to yourself, it's best not to go right at the opening where tours may be lined up to march through the facility. Touring is selfguided. 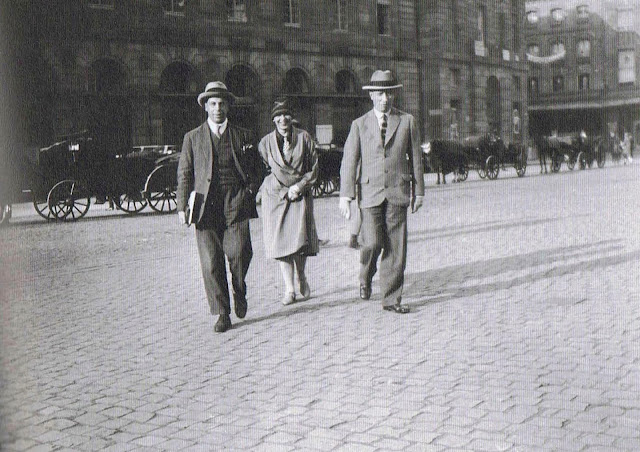 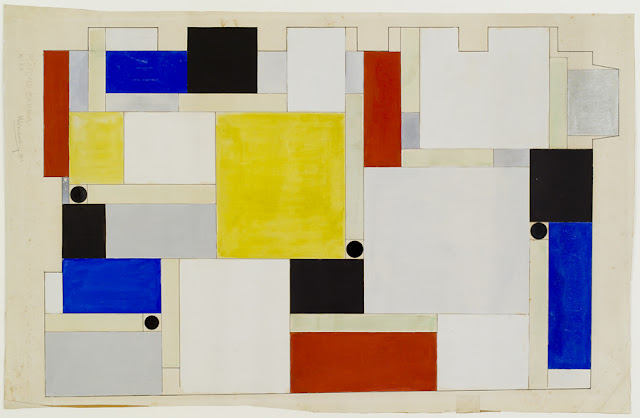 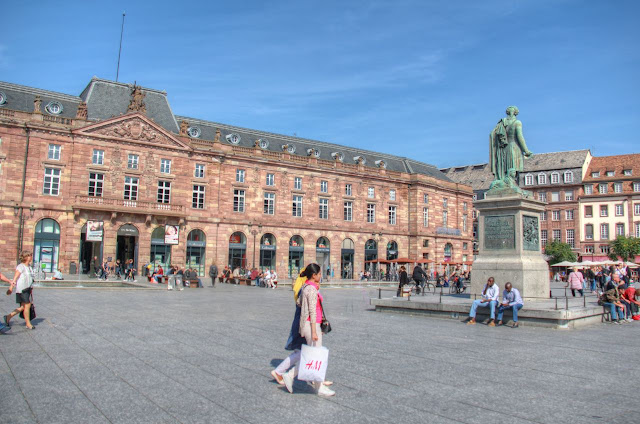 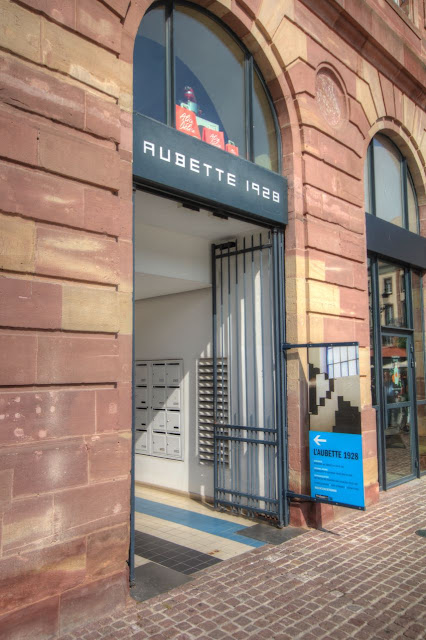 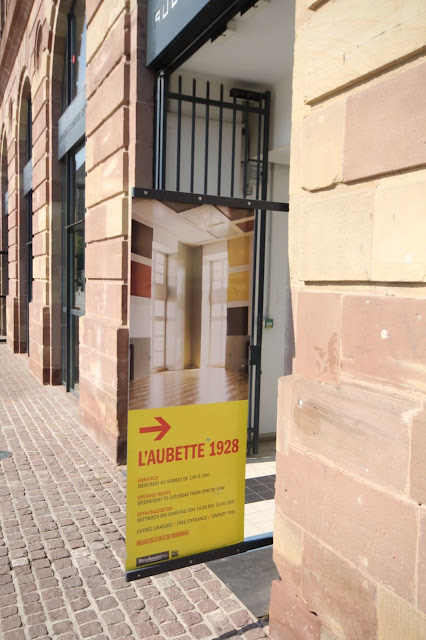 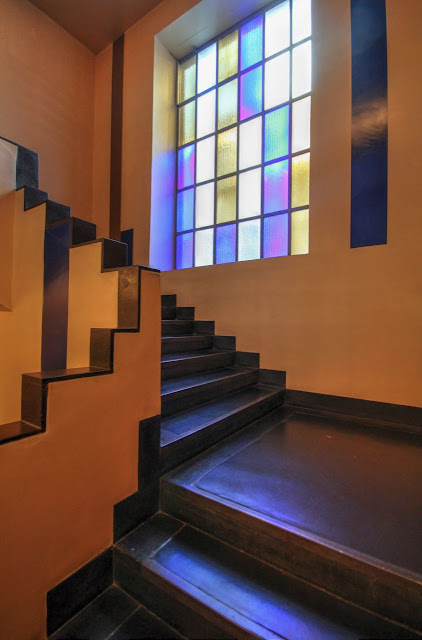 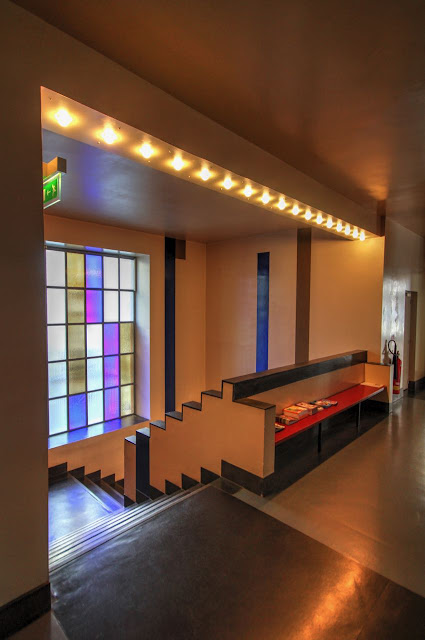 looking down the stairs 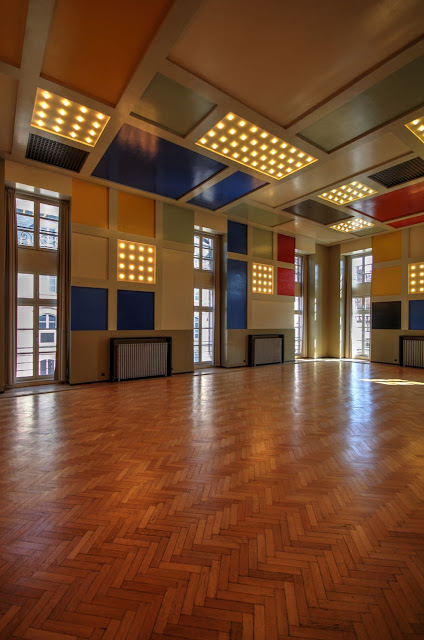 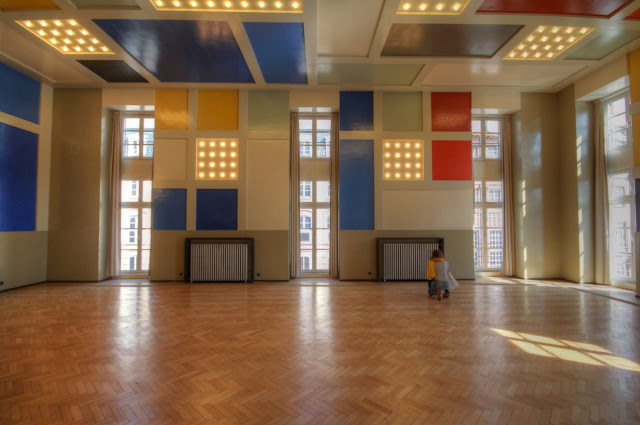 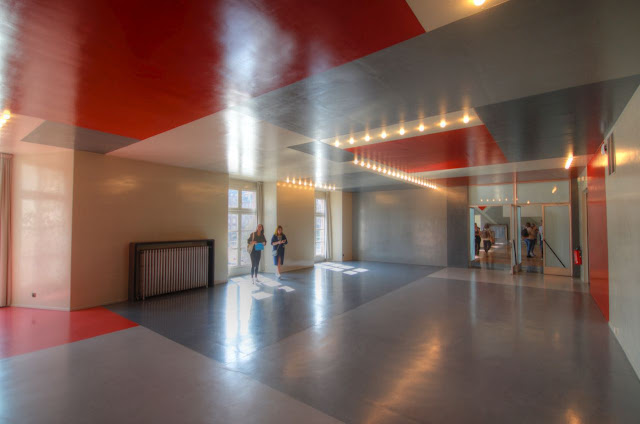 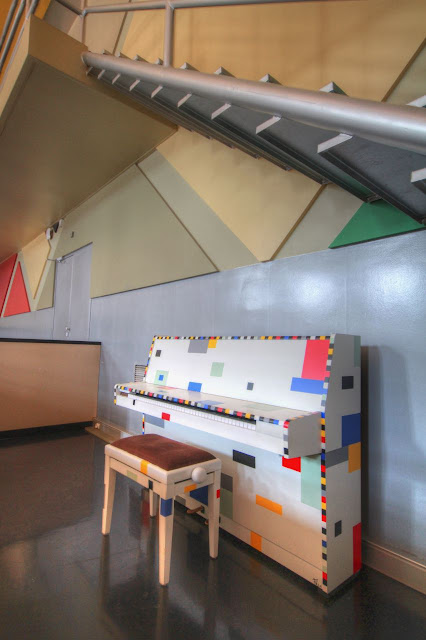 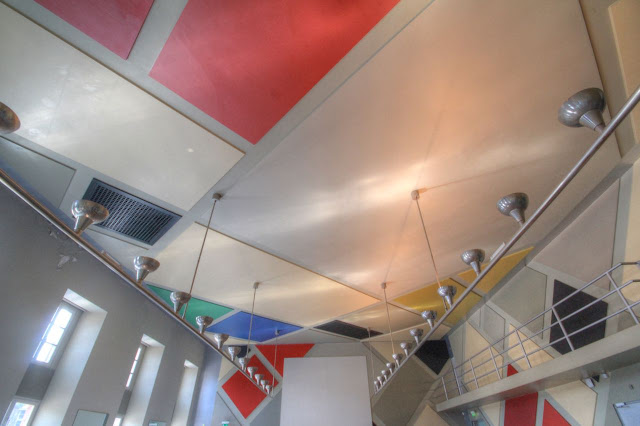 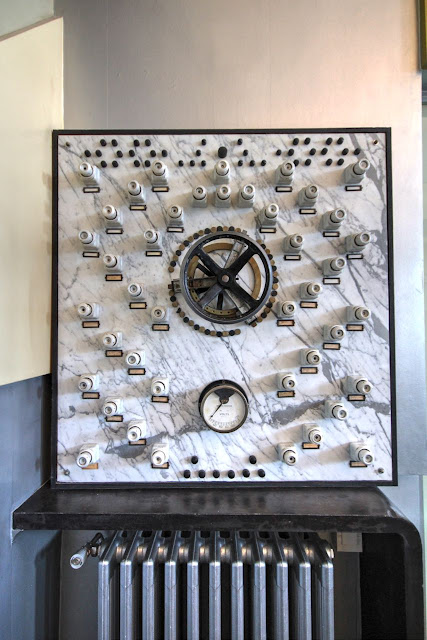 electric box in the cine-cafe 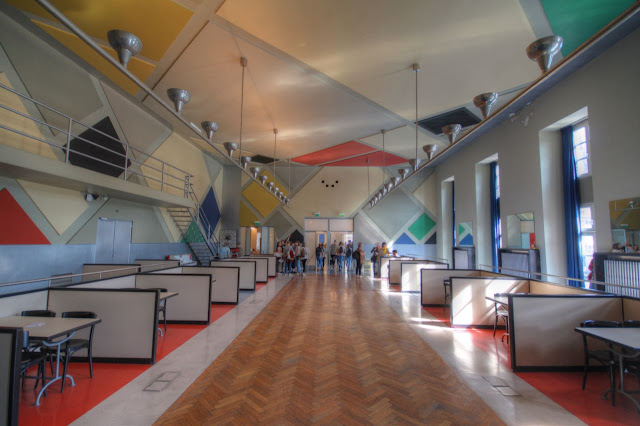 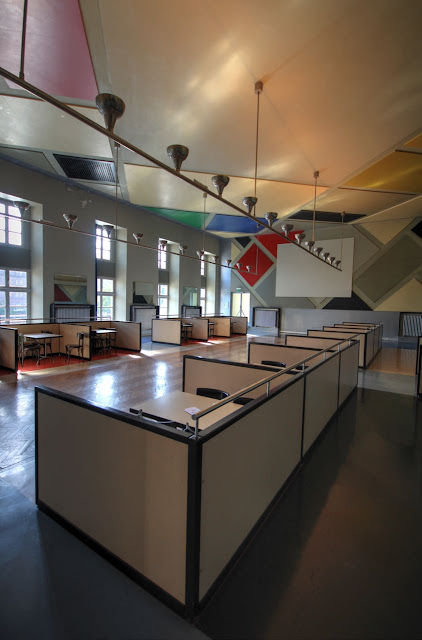 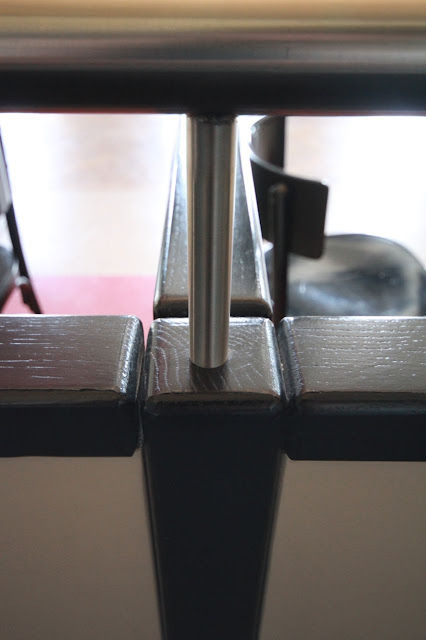 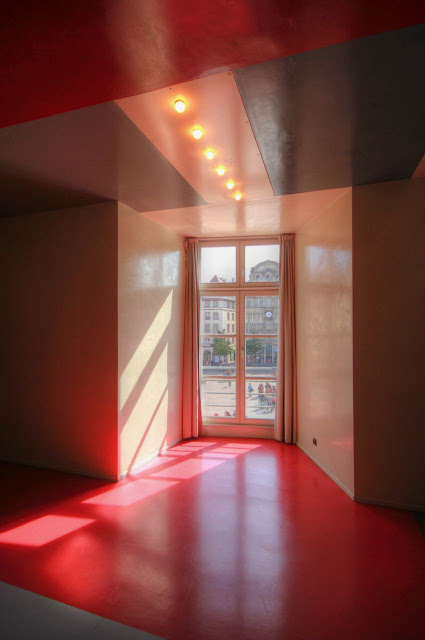 detail in the bar 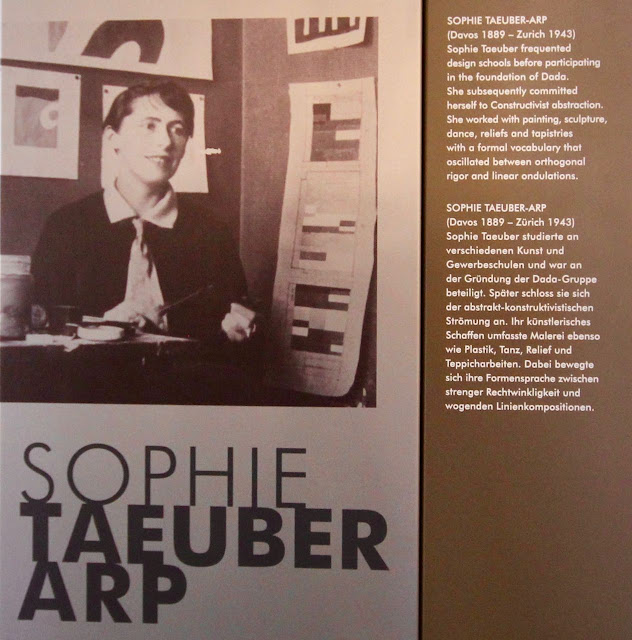 Sophie Tauber. So few women receive recognition for their efforts in early-Modernism... 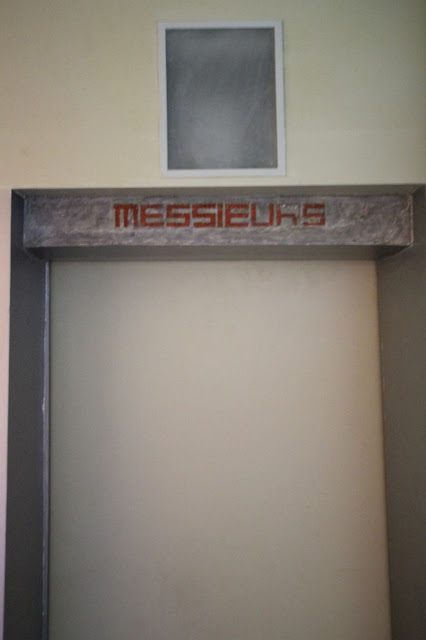 original font and text for the men's restroom 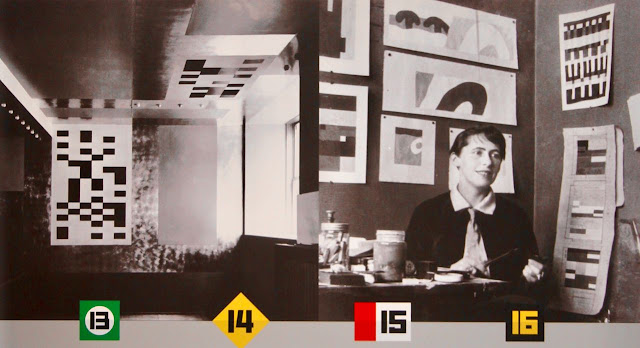 Posted by bubba of the bubbles at 9:09 AM