"Is your house for sale?" 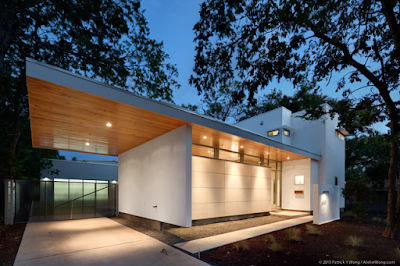 The other weekend a gentleman rang the doorbell and asked "Is your house for sale?" After quickly replying "No!" I quipped "Unless you have a five million dollar check in your back pocket..." which then established that the house was, in fact, for sale. In the immortal word of our former governor: "Oops."

As the old adage goes, everything's for sale. You just have to find the right price.

We have no intent of selling at this point, but, indeed, there would be a price that would pull the house from our cat-loving claws.

Being an appreciator of Modern homes, I gave him a quick tour, and we chatted about what our house would go for on the market. I speculated, and he was willing to pay that on the spot. However, marketprice would be a money loser for us. Yes, we would make a profit based on what we put into the place (not counting the blood, sweat, and tears) but not nearly enough to reproduce our current living situation.

We timed the market perfectly with respect to buying a lot and building this house. We scored the lot after the banking crisis from a hobbyist spec builder. A similar lot in this neighborhood would cost at least twice what we paid for ours, eating up our profit in one fell swoop if we sought to recreate our current living situation. Building costs are substantially higher now than when we built. In fact, if we had started building when our build was finishing, we wouldn't have been able to financially pull the house off. I don't know exactly how much more costs are now than then, but, no joke, I'm sure they are at least 50 percent higher.

And then there's the blood, sweat, and tears aspect. Although we loved designing and building the house, it was a substantial (although somewhat self-inflicted) time sink with ever-present risks and some depressing low points. Given that we're in a place designed for us and that it's beautifully comfortable, the financial incentive to get our butts out of our Corbusier sofa and into a different house would have to be high. We'd need to see ourselves in a much better situation than the one we're in now. I'm not exactly sure what that price is, but it's probably in the the two to three times market value range. Someone would have to really want our house to pay that.

Nevertheless, it's good to know that there are folks interested in Modern and there's a potential market for our house when we do decide to sell (if ever). And it's good meeting someone who may, eventually, be in the 'hood.
Posted by bubba of the bubbles at 10:21 AM