austin|architecture: Is this the first Modern house in Austin? 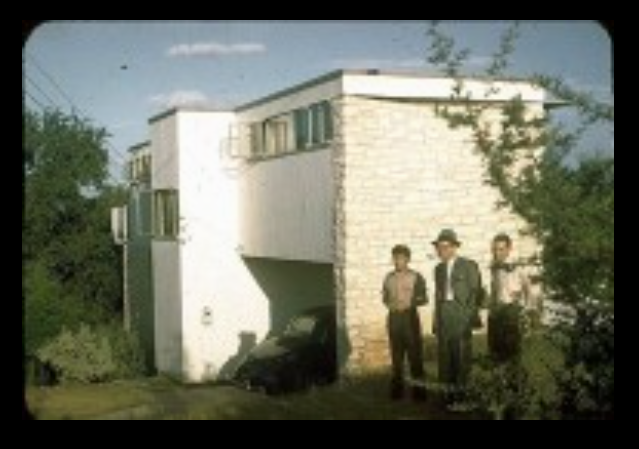 When the bride and I were first seriously looking for lots some eight years ago, our first serious foray into lot looking happened on Churchill Street where a sloping lot along Shoal Creek had recently been scraped. Ultimately, after a few calls back and forth, we bailed on the lot because the owner wanted too much for it. However, we couldn't help but gawk lovingly at a great Mid Century Modern house a few lots down.

That house has haunted my consciousness from time to time, so after I started putting together the Austin Architectural Tour, I looked into it.

Having been built in 1941, it very well may be the first International Style house (building?) in Austin.

A facebook post by Modernism101.com is my primary source for this house designed by Chester Nagel. Nagel studied under Walter Gropius and Marcel Breuer, hence the progressive nature of the design.

I've repeated Modernism101's post in its entirety below to keep it for prosperity in case the property is ever threatened: 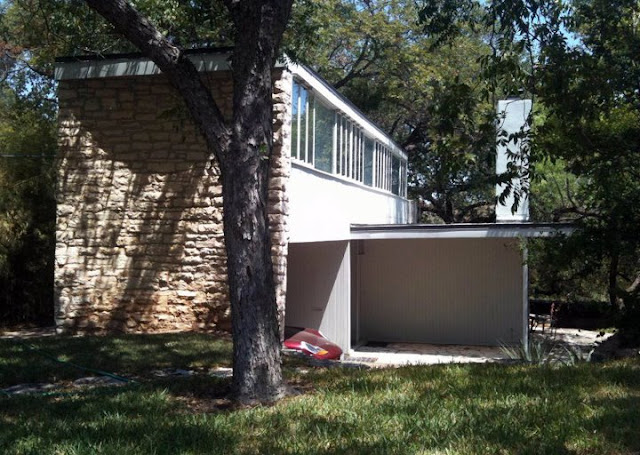 In honor of the record-tying 112-degree temperature in Austin, we profile a house built in 1941 for those Central Texas weather extremes.
House in Austin [Texas] 32 degrees N. Latitude. The climate very hot with an average annual rainfall of 34 inches. A frost depth of 4 inches for usually short winters. "Where one builds essentially against the heat."-- Andre Bloc [Editor]: L'ARCHITECTURE D'AUJOURD'HUI. Paris: L'architecture D'aujourd'hui, February 1950. 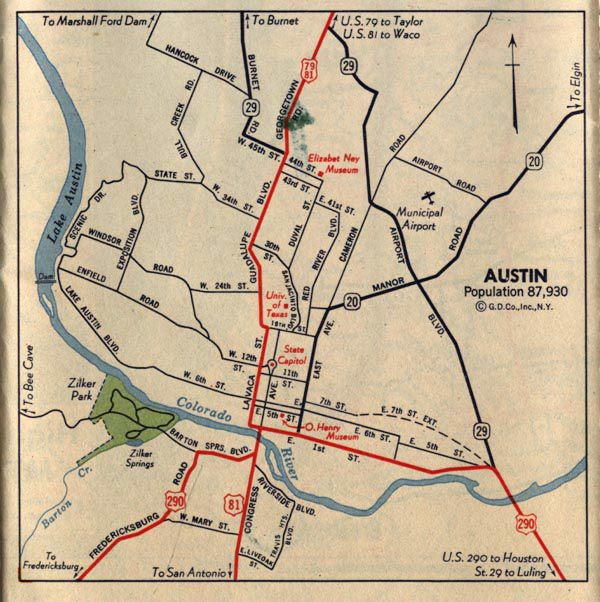 "The house is situated on the outskirts of Austin [3215 Churchill Drive], on the edge of a slope at the bottom of which flows a creek." -- Kenneth Reid [Editor]: THE NEW PENCIL POINTS. East Stroudsburg, PA: Reinhold Publishing Company, Volume 24, Number 1, January 1943.
"The house was planned for today." -- Chester E. Nagel, ibid.
Austin was a small town in 1940: "From the living room, porch and sun deck can be seen almost the entire city of Austin, with the 40-story tower of the University of Texas dominating it." 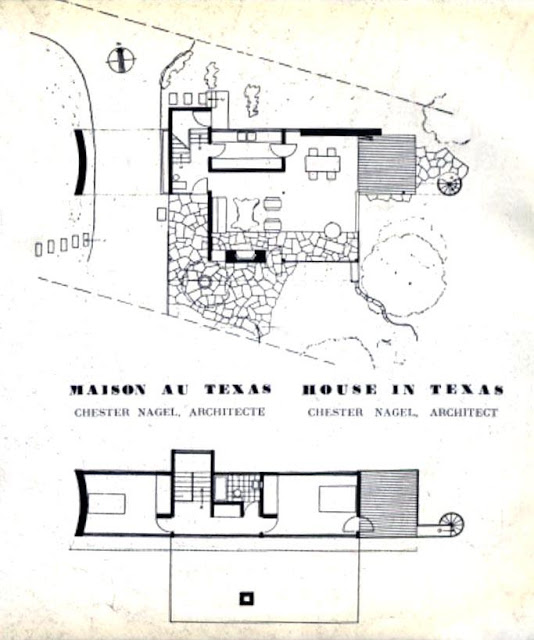 The bed of Shoal Creek provides an almost never-failing breeze. The house designed so that with the windows open, there is always, at least, a refreshing air movement through the second floor.
This effect is designed: on the windward side, windows are small and high; on the leeward side windows are large. The second floor becomes in effect a venturi, which literally pulls air through the bedrooms. 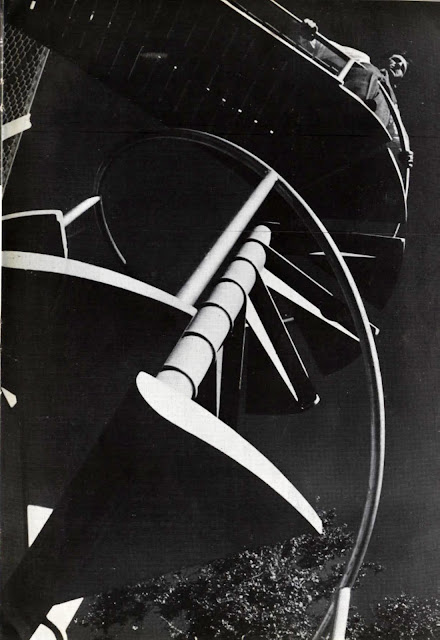 Chester [Emil] Nagel [1911- 2007] was among the first architects to bring the International Style to Texas. Born in Fredericksburg in 1911, he studied architecture at the University of Texas, graduating in 1934. From 1935 to 1938 he worked as an architect for the National Parks Service, helping to design facilities for Bastrop and Palo Duro state parks.
In 1939 Nagel received a scholarship to study at the Harvard Graduate School of Design where he came in contact with Walter Gropius and Marcel Breuer. After receiving his Master's degree from Harvard in 1940 he returned to Austin and, inspired by Gropius' ideas, designed one of the first International Style structures in the state, a house for himself and his wife on Churchill Drive.

The Churchill Drive house is extraordinarily faithful to the programmatic style Gropius developed for building in New England. A few material tweaks and the early GSD residential style was adapted to Central Texas. 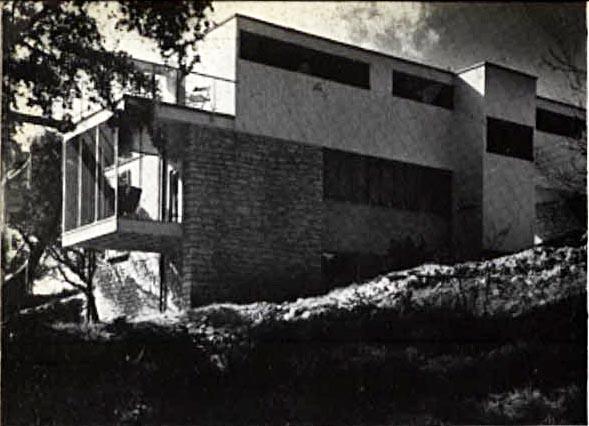 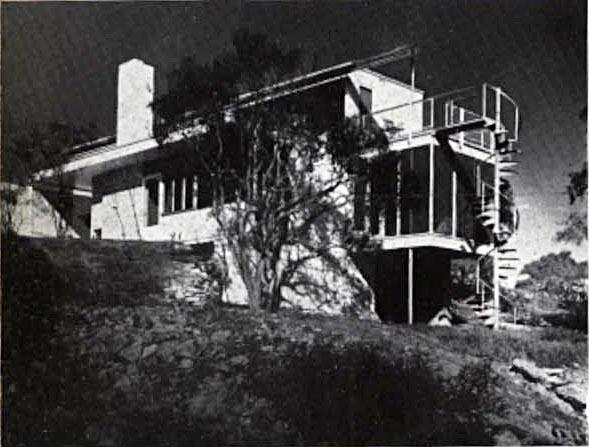 This house is the result of a desire to achieve a group of spaces of such character, and so related and disposed, as to provide the utmost in livability. To this end the forms, colors, and textures used were the logical means.
Beauty was sought in its true and natural forms, not borrowed, not imposed. Natural laws were studied and made to act favorably.
Materials were not wastefully stacked, but chosen and used for what they could do structurally, as well as to satisfy esthetic requirements. The house was planned for today. -- Chester E. Nagel 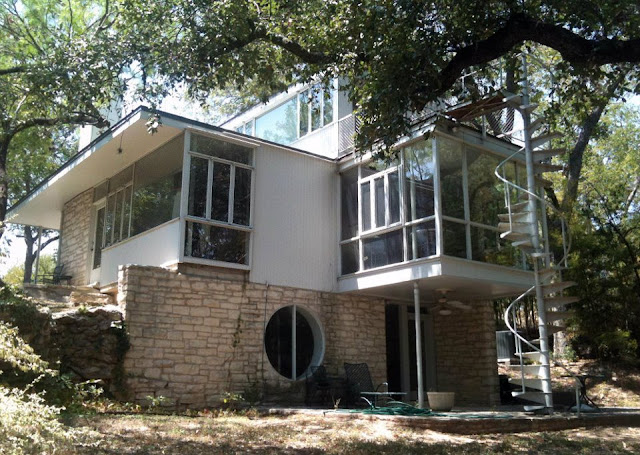 The Chester and Lorine Nagel House was posted to the National Register of Historic Places on April 17, 1997 [97000361]. The house remains in remarkably original condition except for the glass enclosure of the sun porch, the removal of the entrance trellis and the addition of a central air conditioning system.
The finest example of the International Style in Austin has not been expanded or demolished in the 70 years since its completion.