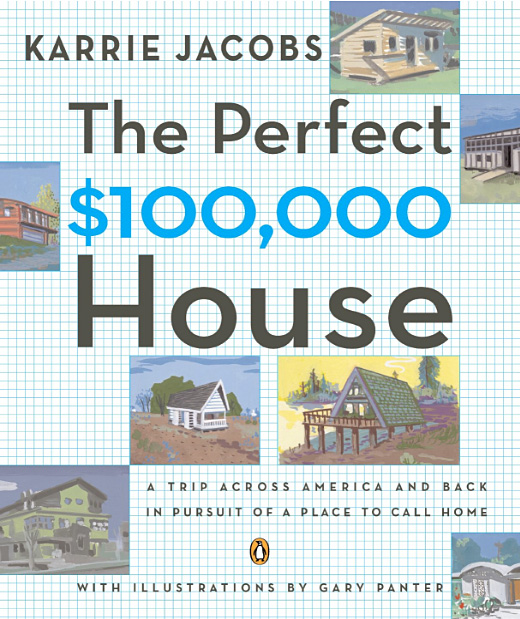 one hundred thousand...
is it even possible?
at this time and place?

I clicked this book up in a weak moment during my tequila-fueled frenzy to learn more about Rocio Romero's LV house. The next morning, regret washed in: "I can't believe I bought a book simply because it mentions Rocio Romero..." But after Karrie Jacobs' The Perfect $100,000 House came and after I, yes, skipped to and read the Romero chapter, I started the book from the beginning and read it clean through. It is an absolute gem.

The book is like Jack Kerouac's On the Road fused with Dwell but without the drug use (and the underaged sex south of the Tropic of Cancer [although I suspect there was some rolling around in the hay {bale house}...]). Jacobs had just left her job as the founding editor of Dwell under something of a dark cloud and then, freed from any obligations and back into the freelance world, traveled 150,000 or so miles across the U.S. in search of a $100,000 house, the amount she could afford. Mind you, this is in the Early Aughts (circa 2003), so a hundred grand today ain't what it used to be (according to the feds, $100,000 then would be $130,000 today, still a modest amount for a new house). Nonetheless, the book's focus is really on accessing good design at an affordable cost.

What she discovered was that being affordable required cheap land (of course), conventional building techniques (although there are exceptions), sweat equity, modularity (although there are cost challenges), and an architect willing to assume little to no compensation for the task (or have that compensation spread out over multiples). As one of the Andersons of Anderson Anderson Architecture states: "The least expensive house is the most conventional one." The clean look of Modern costs money, making an inexpensive Modern house highly difficult.

I was pleased she made a stop in Marfa. She points out that Donald Judd, despite a fixation on cubism in his art and furniture, placed curving roofs on his buildings. She then stopped in Austin to visit with Chris Krager of KRDB and describes a house friends of ours built in South Austin: 1,400 square-feet for $125,000. KRDB's work is Schindleresque in that KRDB works with the standard materials of construction: wood and stucco (Krager is an admitted Schindler fan). R.M. Schindler worked with these materials so his clients, mostly folks of modest means, could benefit from inspiring spaces without breaking the bank.

Jacobs observes that early modernism was about function, whereas "...today's modernism is chiefly about style. It may be minimalist in design but it is maximalist in budget and attitude." Although Modernism from the get-go, except in a few cases, has almost always been for the wealthy.

Jacobs finds that production architecture, the KB Homes of the world, have achieved cost precision that most people appreciate, certainly people of modest means that can't find out halfway through their build that their dream home is going to cost 50 percent more than they thought. Unfortunately, the designs are atrocious (on many levels).

Bryan Bell, an architect/builder of houses for migrant farm workers, describes how "...a square house gives the most volume for your price. It minimizes the size of the foundation and the roof." The coolest part of this book was learning about various architects around the country, including Bell,  doing inspiring work on accessible, affordable Modern, such as Sambo Mockbee of Rural Studio in Alabama (see photos below).

As far as Rocio Romero? Jacobs sees her architectural production model, prototype then production with conventional construction, as the realistic path forward for affordable Modern. Jacobs states that "[t]he LV Home is such a strong design that it's iconic..." and "...that the LV Home will be a classic design, something about which preservationists and cognoscenti will hold conferences fifty years hence..." Interestingly, Romero hits on all the key parts of affordable modern: conventional building techniques, simple footprint, modularity, and a way to minimize architectural fees, a remarkable feat for a young architect.

This is not a book of images. In fact, there is not a single photograph among its nearly 300 pages. Each chapter begins with a line drawing of a home discussed in the ensuing pages. Nonetheless, it is a fantastic, easy-peasy read. I don't pass too many (if any) architectural tomes toward the bride, but this one I did. It's been keeping her up late reading it. 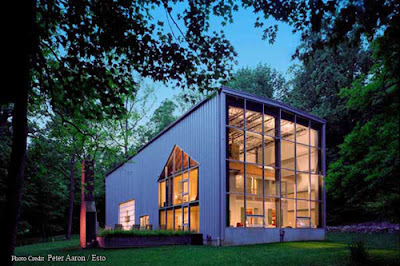 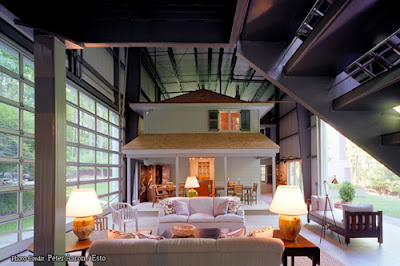 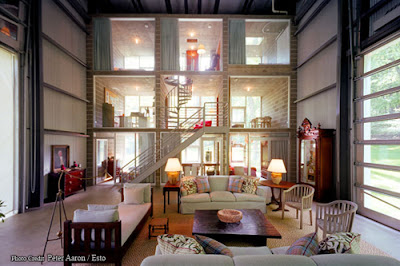 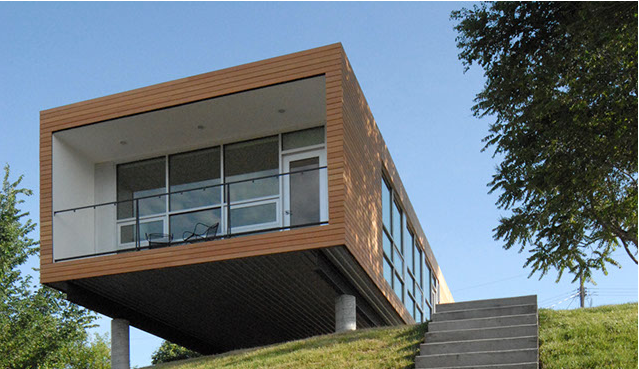 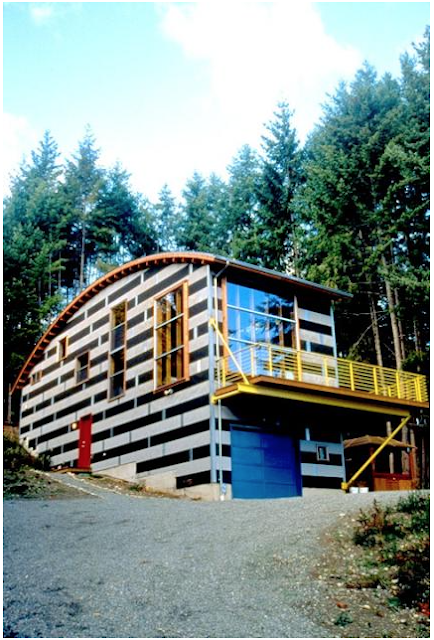 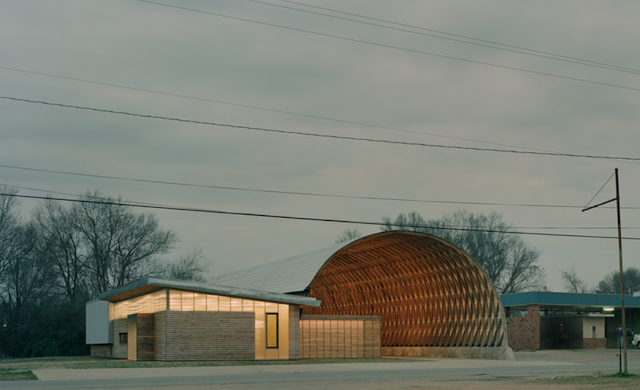 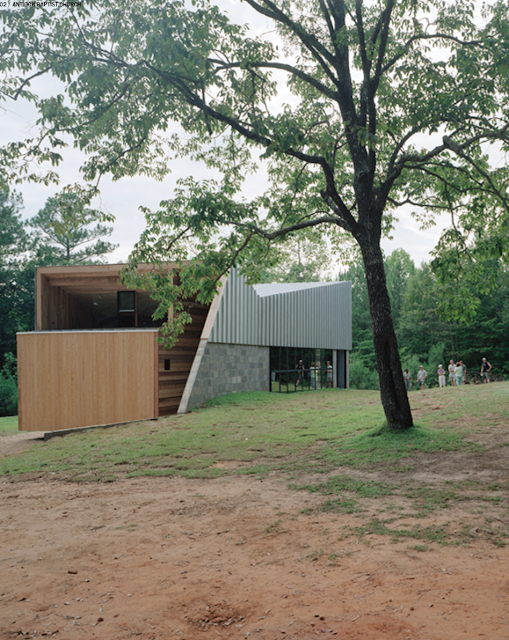 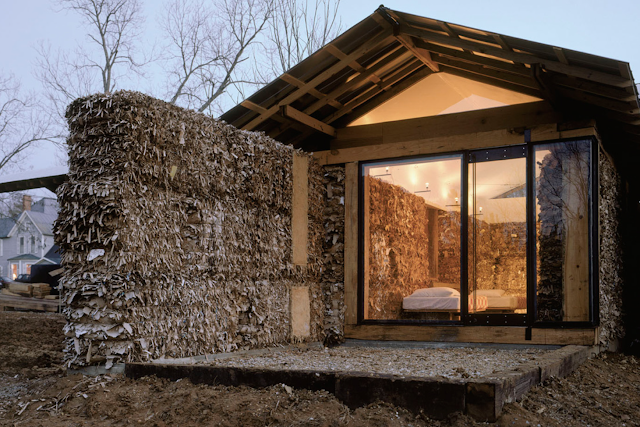 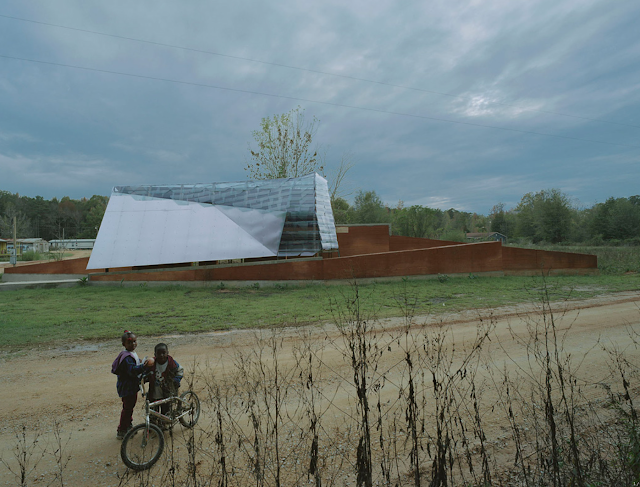 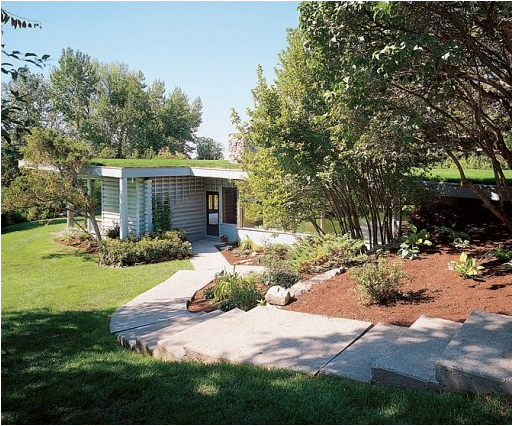