a year in review (what's good and what could have been better...) 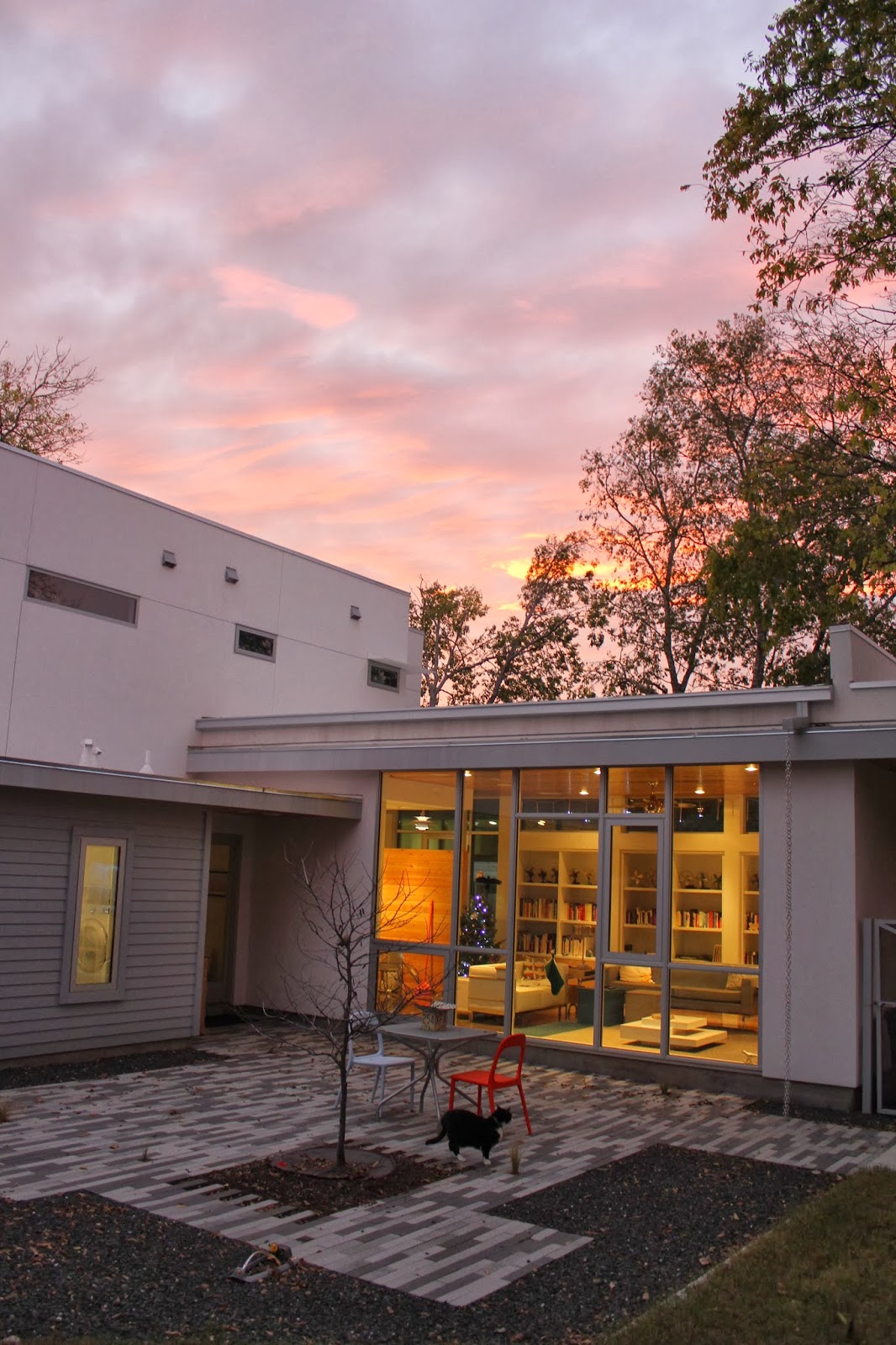 Wow. A year already? Time just flies... But it's been a good year!

First off, we have absolutely no regrets on building this house. It's truly been wonderful. It's well designed, gorgeous, and incredibly comfy. I think my favorite part of the house is the windows. I love looking in any direction and seeing outside, especially the clerestory windows that show green trees and blue skies as well as the window wall in the living room. The cat would agree. The bride's favorite bit is the kitchen, with it's openness, ample storage, and mucho workspace. But choosing the favorite part of the house is like choosing your favorite child: There are so many favorites that there ain't just one.

Having said that, we do have some regrets and some things we would have done differently if we had to do it all over again. We list them here so perhaps someone can learn from them (and perhaps us as well at some point; as a friend's builder once said "You have to build at least two houses so you can benefit from what you learned building the first one!").

In the grand scheme of things, our regrets are minor compared to the glory of the good. But they are, indeed, learning moments. 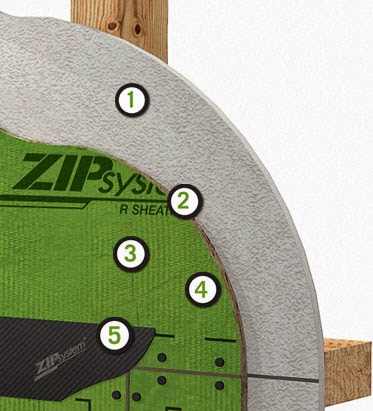 what happened to our foam?

We really wanted a layer of foam around the outside of the house to minimize thermal bridging via the two by sixes. Spray foam is great, but the wood between the foam is the weak link. To scratch this itch, the architects specified EIFS (exterior insulated finish systems), but the builder balked (EIFS has a bad reputation due to its early misuse). At a meeting to find a resolution, the builder noted that ZIP, the maker of the builder's preferred sheathing, had just come out with a version with foam sandwiched between the boards. Perfect! Except the change didm;t make it into the specs and therefore didn't get installed (and we didn't notice until it was WAY too late to do anything about it). 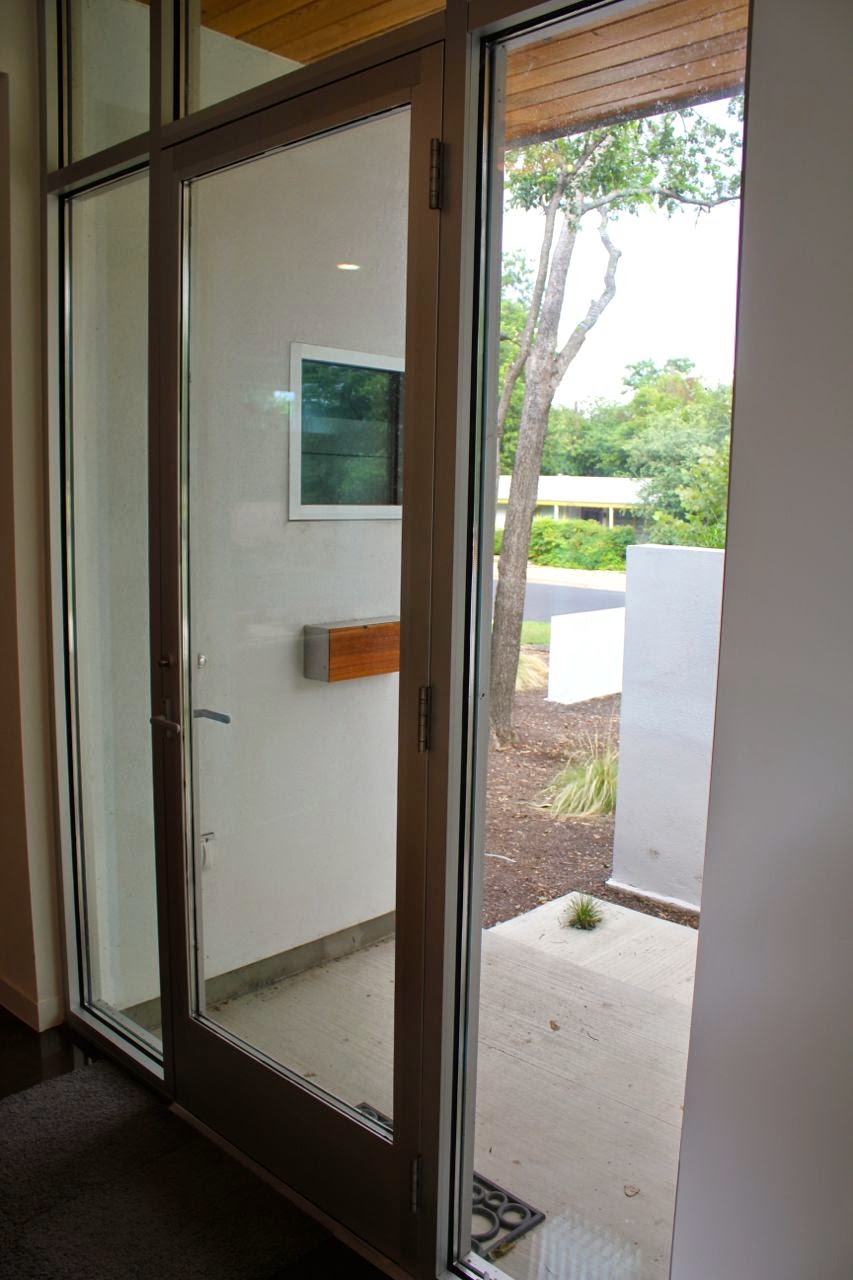 The bride (and I, to be frank) adore storefront doors, so we spec'd 'em (and got 'em) for the house. However, amidst wading (drowning?) in all the details of the house, the ones we got are not thermally broken. Not fatal, but a minor "sigh...." moment nonetheless. It could have been worse: the giant window in the living room was originally spec'd to be storefront before the "regular" window company made a successful power play to get that job (and installed thermally-broken windows). 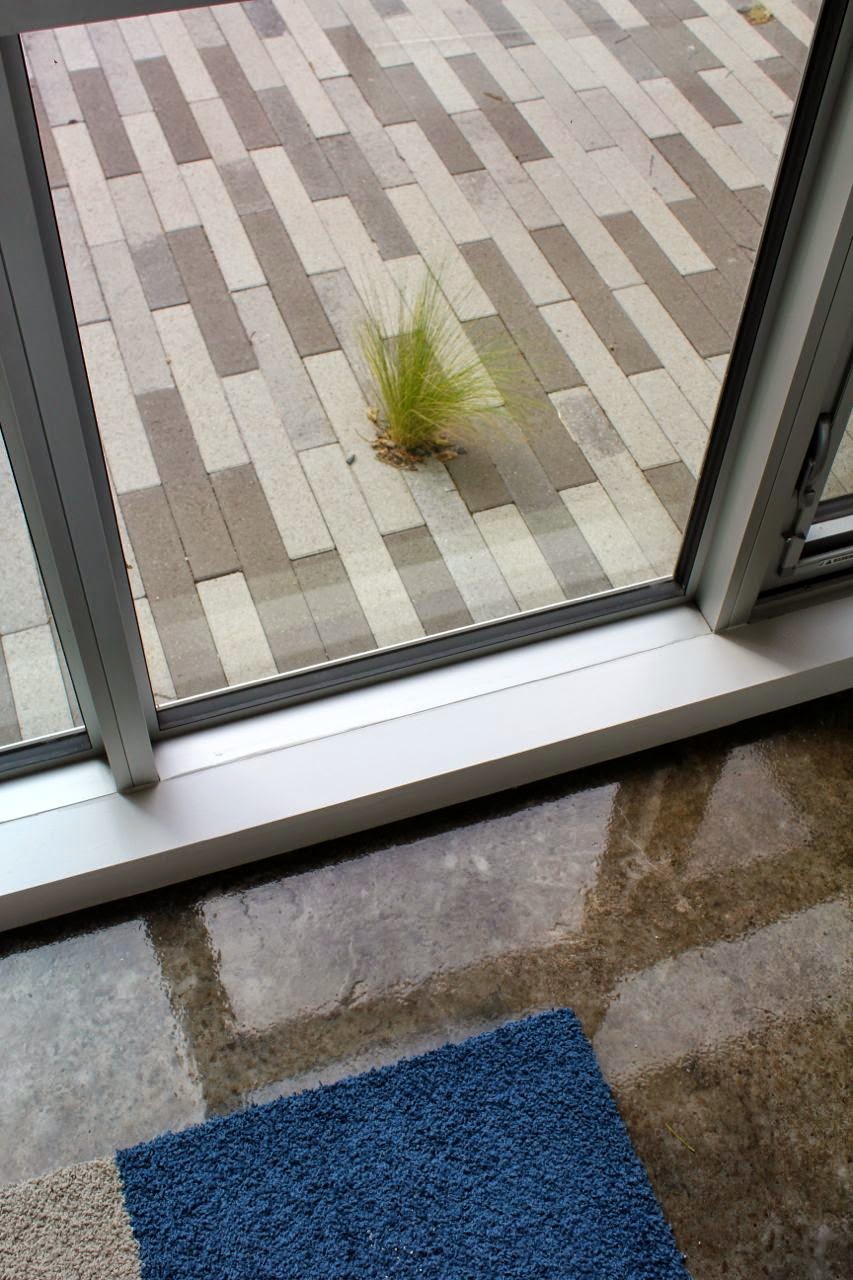 This is an after-the-fact regret since we didn't think about this at all. The thermal losses (and gains) through the edges of the slab are quite noticeable in the sense that you can readily feel the temperature difference of the slab as you approach an edge. In retrospect, this is not surprising: after all, concrete is a thermal mass, but it's amazing how noticeable it is. Not sure how this is dealt with in a slab (a cursory glance about the interwebs show foam on top of the slab with more concrete poured on top as well as insulating the side of the slab) or if it would have even been possible, both sub-wise and budget-wise, but I wish we'd looked into it a wee bit more...

postnote: Here's an article that discusses how to foam up a slab. But would a sub ever do this? 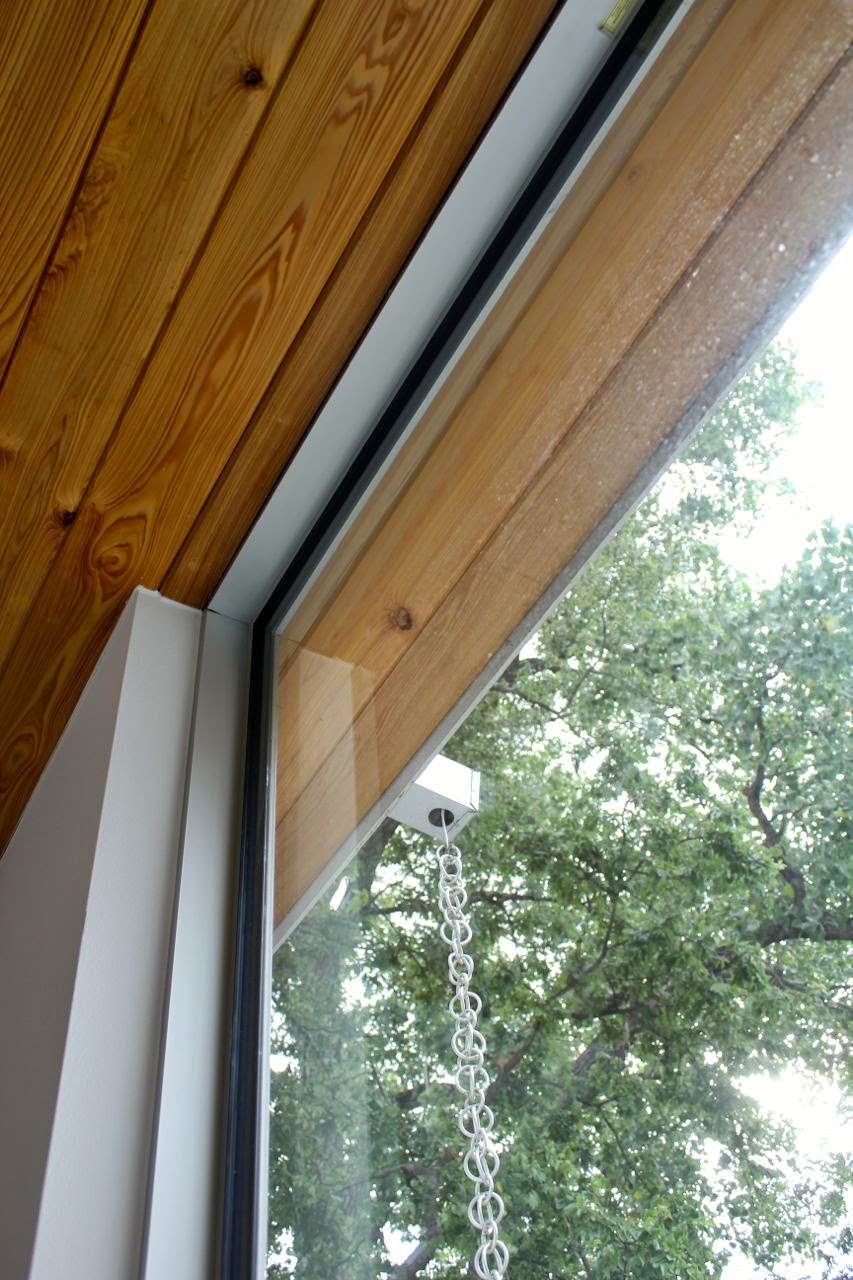 I've often wondered why the architects spec'd a one-foot eave on the east-facing side of the living room. Not that an extra foot would have added that much more shade, but it looks a little stunted to my eyes. And then one day I realized why: We asked for our living and dining rooms to be a foot wider because of circulation concerns. That foot had to come from somewhere (given the length of ceiling support), and so it came from the eastern eave.

lesson learned: When asking for a change to the plans, always ask the architects what the implications of those changes are. What are you "losing" when a change is made. 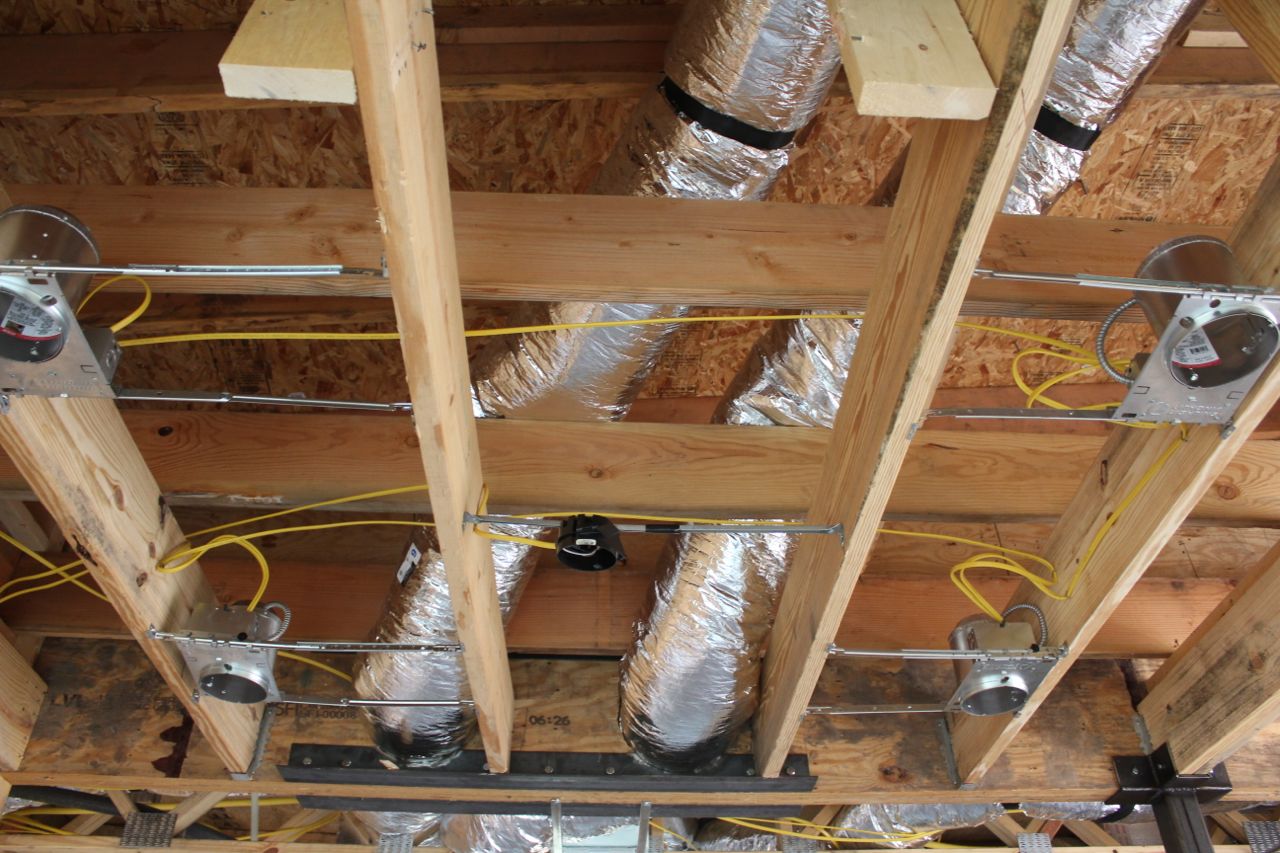 the loss of a suite air trunk

As designed, the house had three awesomely linear air handling trunks: A trunk to the living room, a trunk in the attic space to the upstairs bedrooms, and a trunk down the hallway to the master suite. The straighter and smoother the trunk, the more efficient the air flow. The more efficient the airflow, the less energy is used to heat and cool the house. Unfortunately, that ain't what we got in the end.

The glitch here occurred when the engineer spec'd the trusses and support for the house. In the plans, he spec'd a lot of solid beams across the trunkways, especially the trunk to the master suite. There are three solid-wood beams between the air handling unit and comfort in the suite.

In the end, we had to cut two giant holes in the beam and subsequently support them with steel to get air to the living room. For the master suite, we had to run smallish, snake-ish flex tube above, around, and about to get air to the master suite. Not even close to ideal, and a solution that continues to cause issues with climate control in the house (don't worry: we're comfortable! but the system is very touchy. if we select a temperature too cool or too warm too fast for the master suite, things go awry temp-wise upstairs where all the extra air is dumped).

Ultimately no one. The builder builds, so that's not his fault. The HVAC installer inherited the beams, so it's not his fault. The engineer was simply doing his job, so it's not his fault (an ultimately we want a structurally safe house). One could point to the architects, but the budget of the house (and the architectural fees) wasn't at the level of the architects helicopter-momming the project. And I wasn't able to understand the engineering plans enough such that I could have recognized the issue up front. And even if we had recognized the issue, there might not have been an economically attainable solution at that time in the process. This is a double bummer because we were attentive on our side on having simple trunks and did "what we were supposed to do" in terms of getting everyone (architect, builder, HVAC installer) on the same page. Someone needs to add "engineer" to that list as well.

We're seeing how it goes, but we're talking about putting in a mini-split in the master bedroom. Keeping the master suite comfortable is causing the rest of the house, particularly upstairs, to be extra cooled or heated (depending on the season) than it ideally should. This is costing us in energy efficiency.

lesson learned: Have the architects draw out a conceptual HVAC trunk plan and make sure the engineer is aware of the importance of that plan. At the very least, there's a discussion of options before the engineer (and the builder) sets the plans in stone. 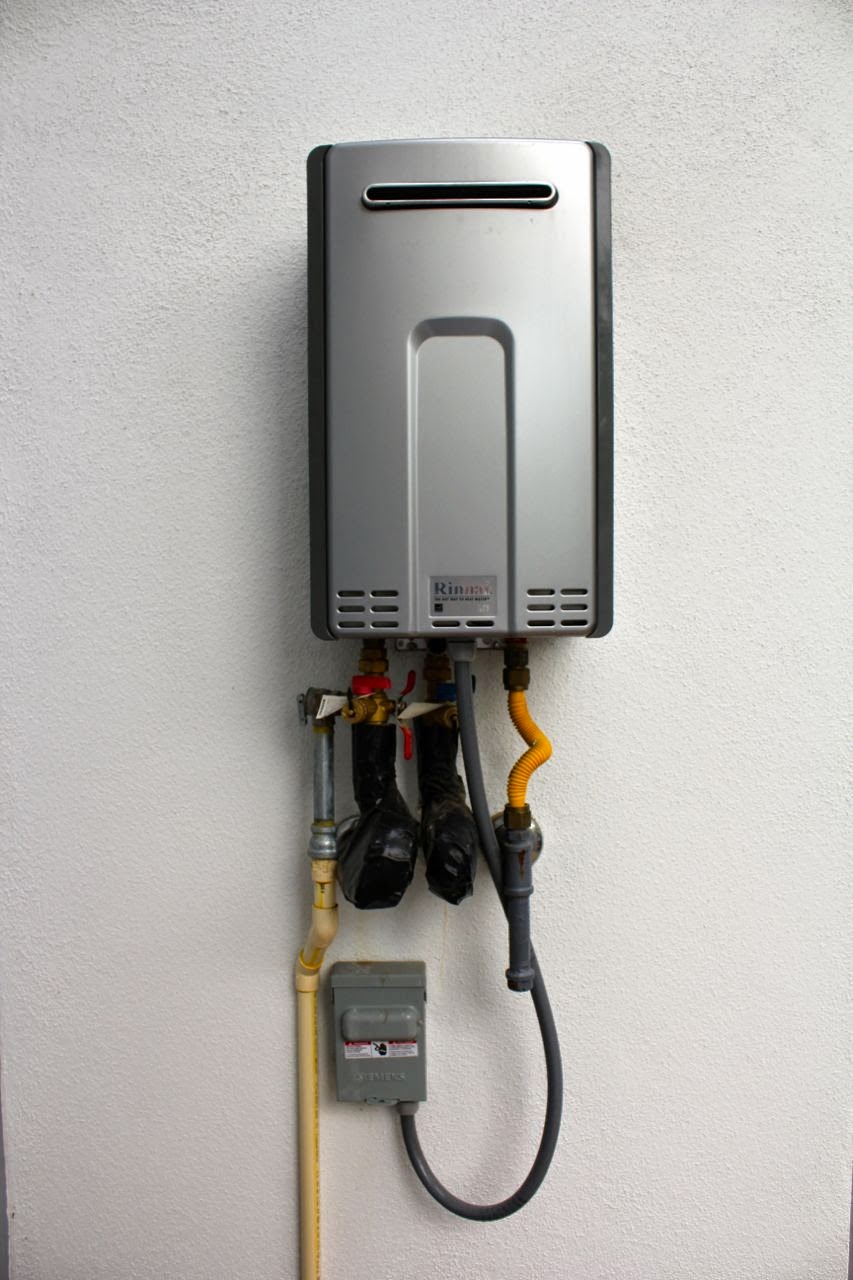 One surprising (and frustrating) thing about the house is how long we seem to have to wait for the hot water to get to a faucet. Being a water conservationist, it kills me to stand there and seemingly wait (and wait) for the water to warm up. I suppose it could have been worse: the architects spec'd the water heater for a central location to the faucets (with the exception of the powder room, but no big deal). What if the water heater was at a more distant location?

Not sure what the solution would have been. Are the supply lines too big? Should they have been smaller? Another option would have been to have had a hot water circulator: a system that, once you press the button, circulates the cool water in the lines back into and through the water heater. Not sure if that would work with an on-demand water heater or if we would have had to get a tanked water heater (or somehow hooked up a tank). Nevertheless, we'd a done it differently knowing what we know now.

lesson learned: Probably would have gone with a tanked system and a recirculator. Didn't realize I would be this affected by it!

Chalk these all up to hindsight is 20-20. All minor, but I wonder about them from time to time... 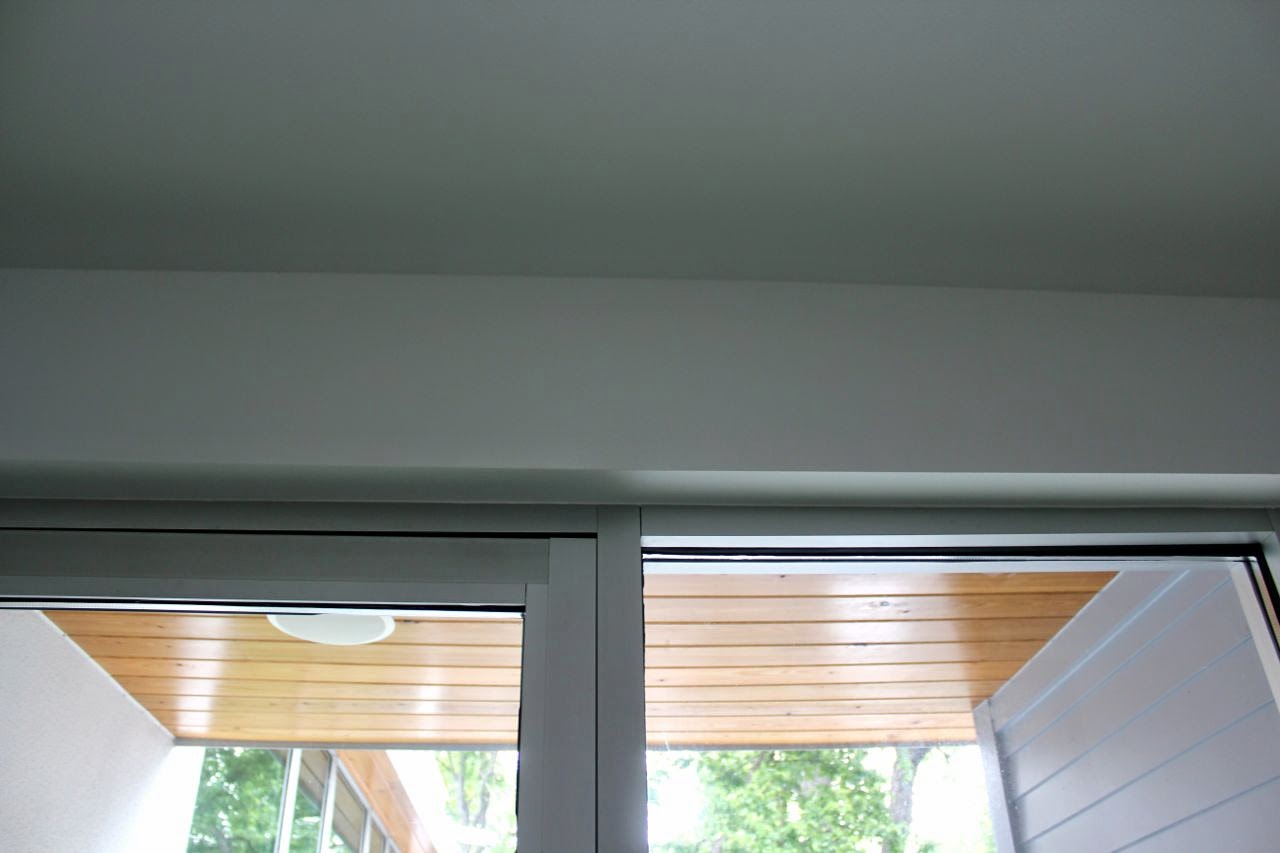 If we had to do it all over again, we would have asked for the window and door on the rear entry to have been spec'd to go all the way to the ceiling (and then carried the cypress into the house on the ceiling). The cypress here was a change-order on our part, and I suspect the original plan was this way to save money, but it would have been nice to have this entry be a full mini-me version of the front entry. Don't get me wrong: It's still nice! It's just one of those detaily things that would have been nicer... 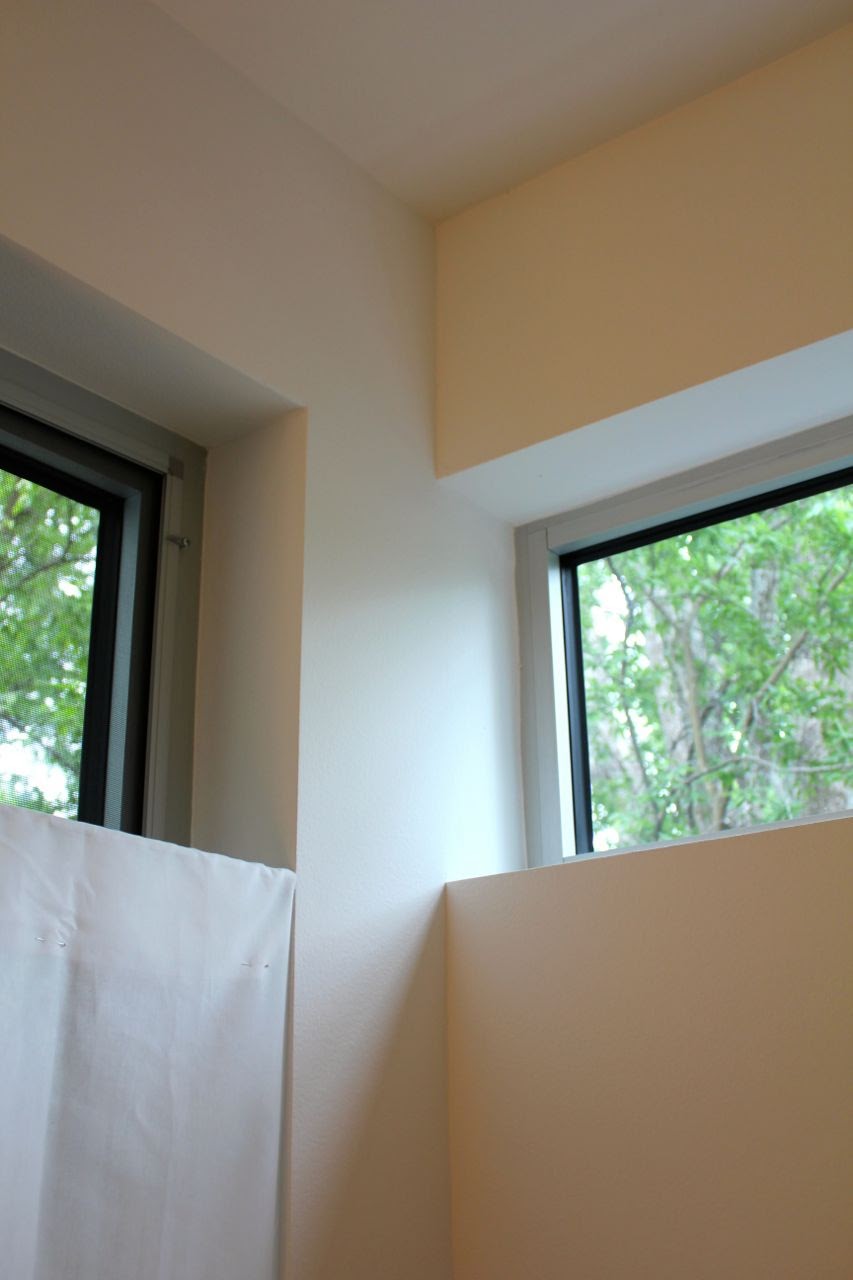 Love this detail: The wall carrying out smoothly to the edge of the window on the right. Strikes me as de Stijl, an emphasis on the planes. This detail shows up in other parts of the house, but then there are others where it doesn't, and I'm not sure why... 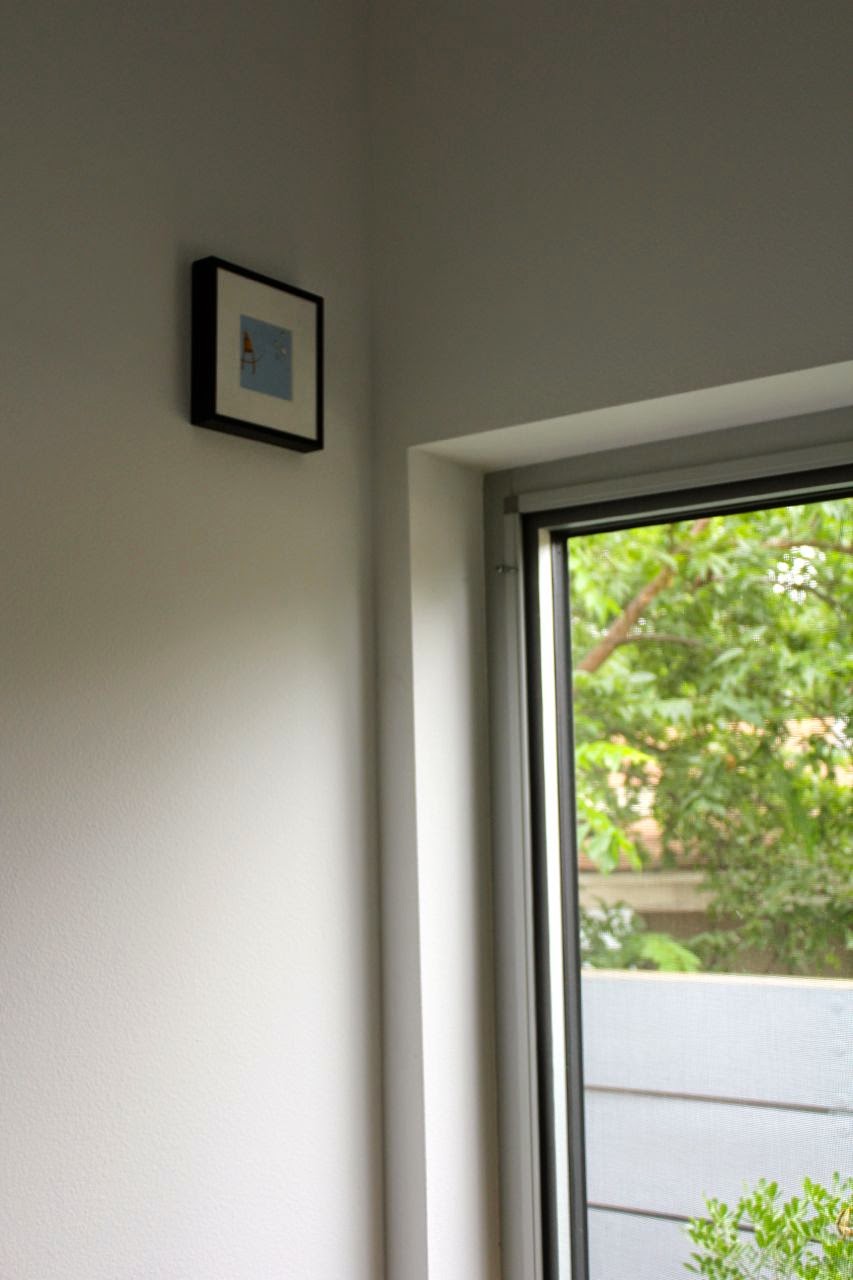 Window in the office: So close! 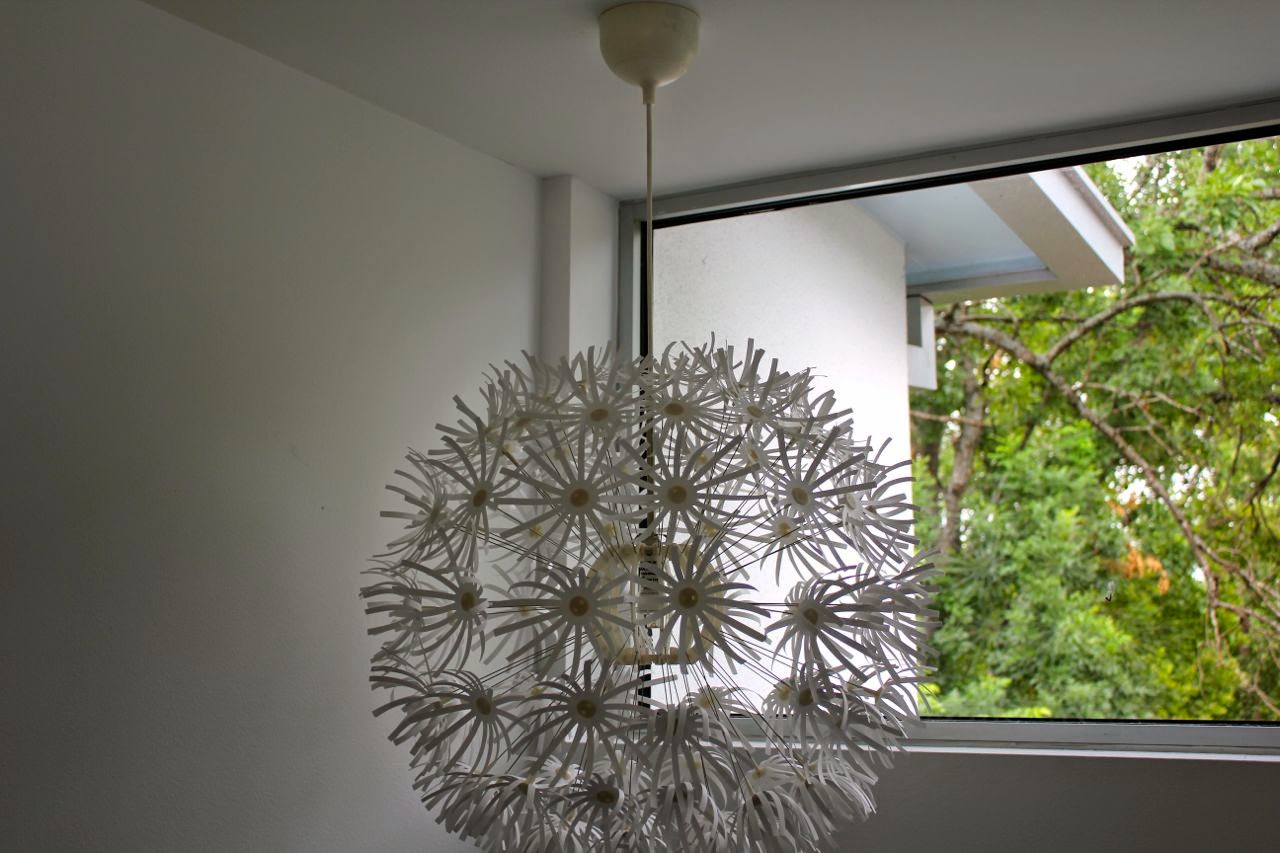 Windows's in the stairwell: Sooooo cloooose!!! I think the issue here was transitioning from two by sixes for exterior walls to two by fours for interior walls. 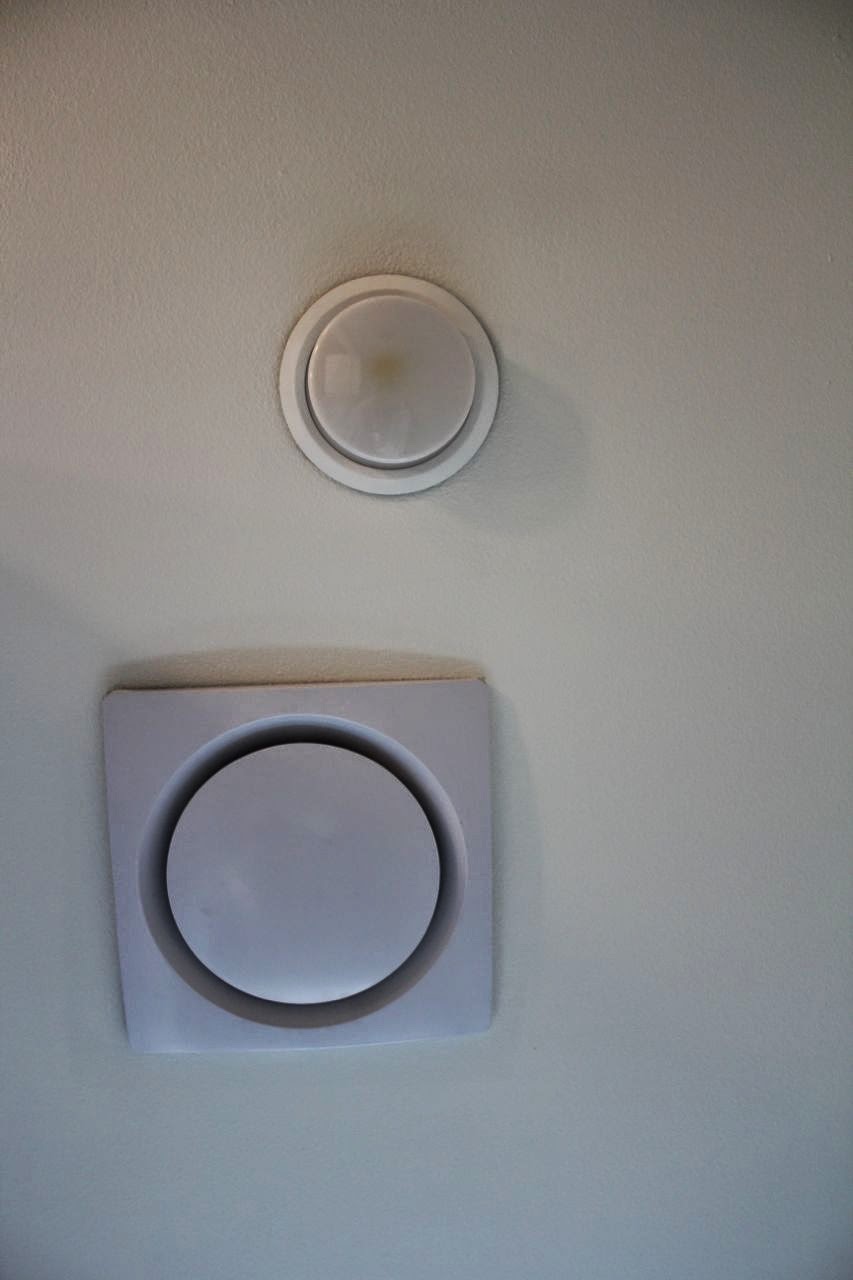 Master shower: Light (centered), vent (not). Also a victim of the ductwork issues (couldn't center the vent due to the unexpected running of ductwork into the master suite). 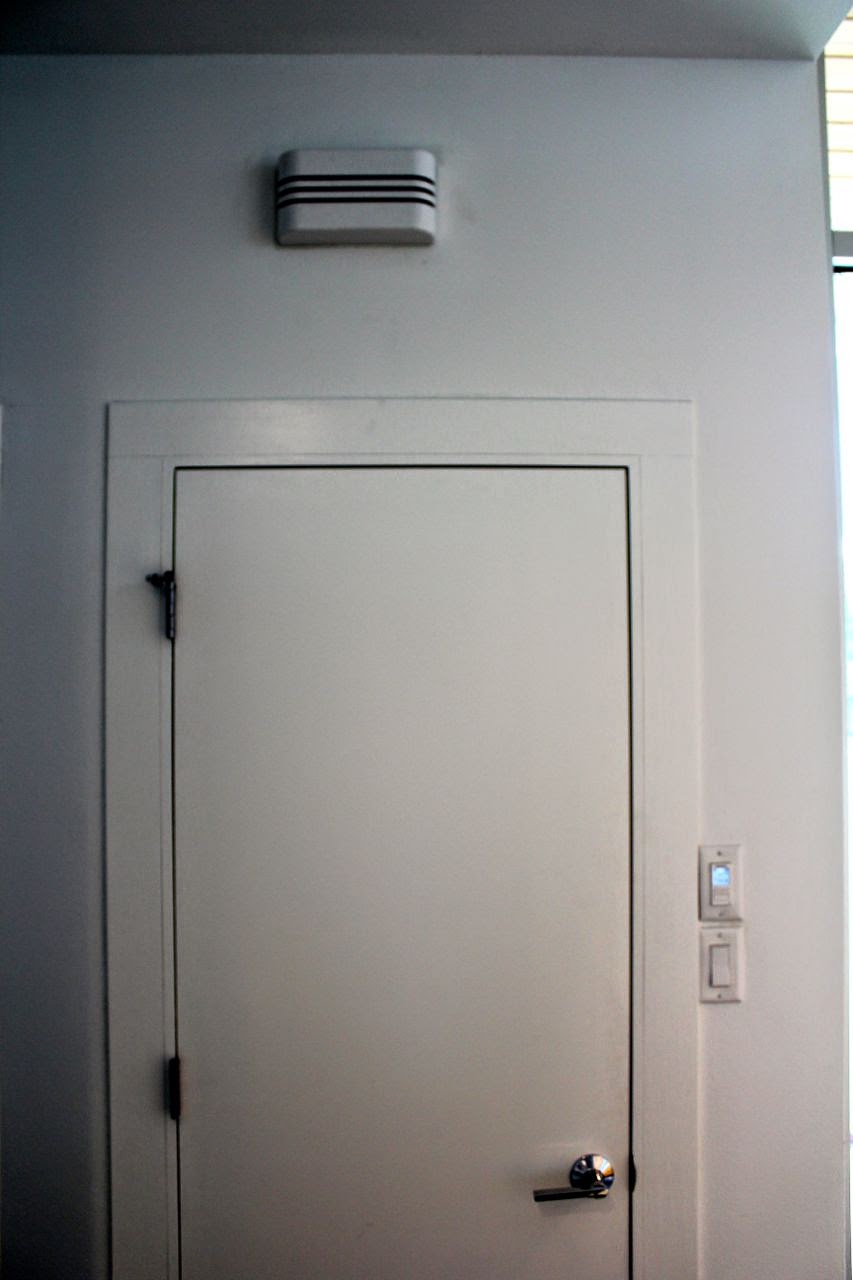 Wish this was centered... Because there's a stud right in the middle of the closet door, the doorbell is slightly off-center. 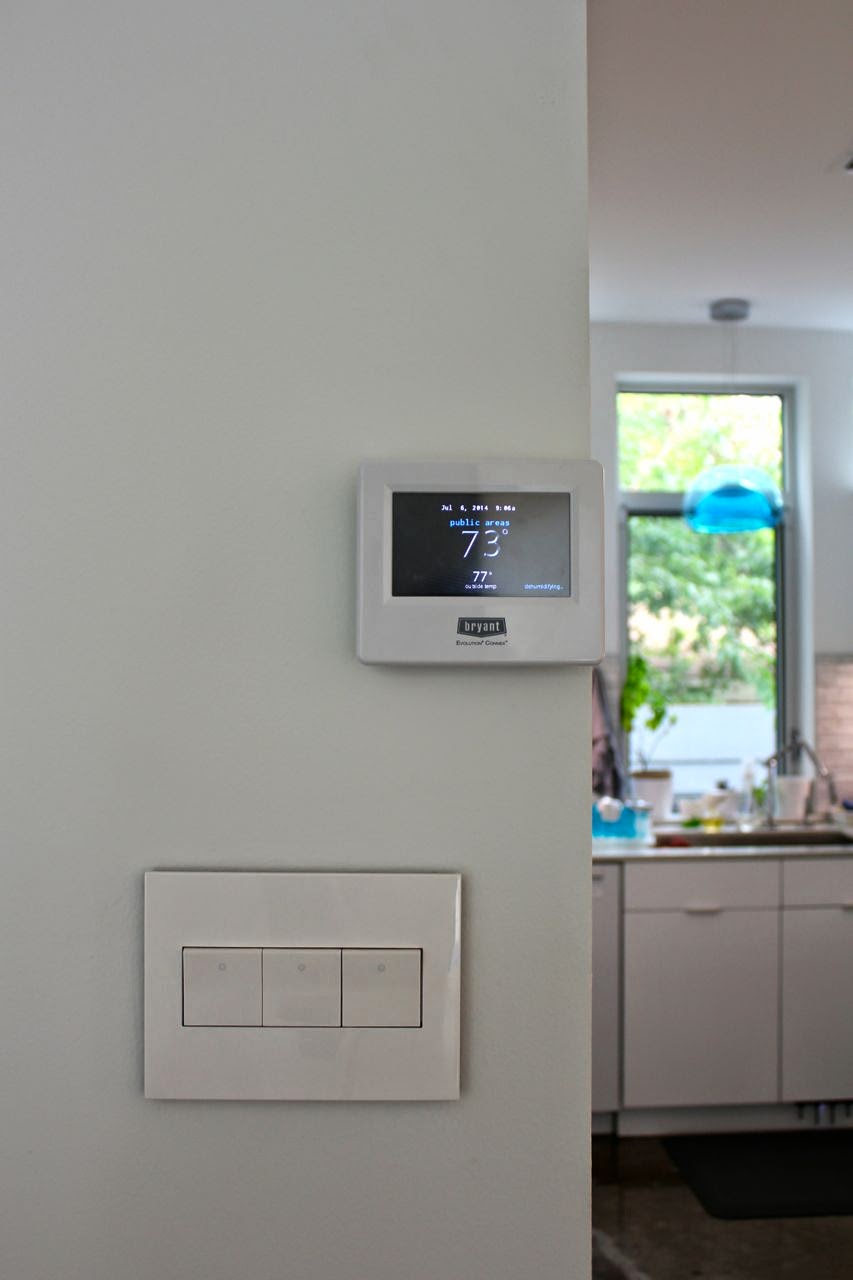 Not sure what happened here... 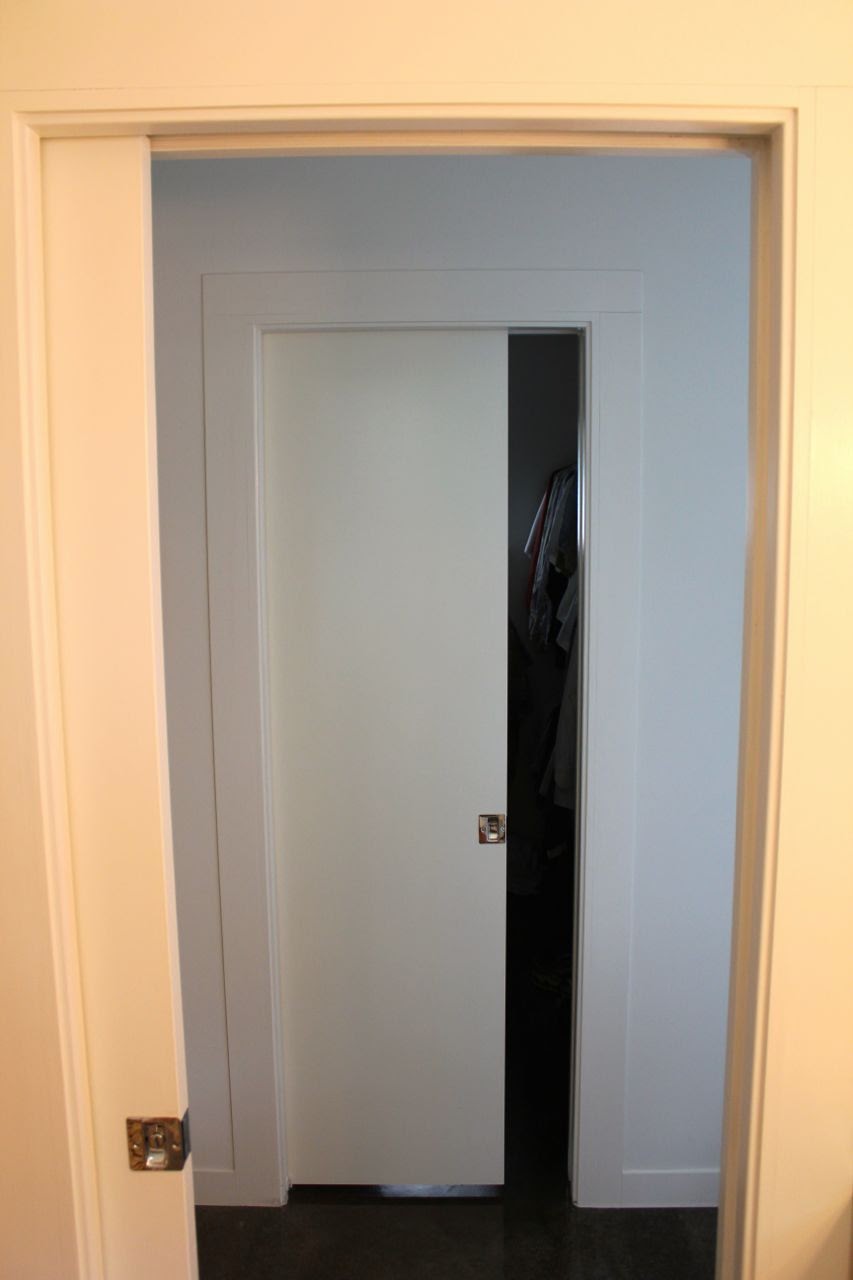 Love, love, love the pocket doors and wish we had put more in. One thing we didn't realize is that regular doors cover up a sizable chunk of the wall when open such that they cover up a lot of prime real estate for art. There's at least three more we would have spec'd if possible (office, pantry, and master suite [although the latter wouldn't have worked since there isn't a receiving wall]).