howz that energy efficiency coming along?


A reader recently asked how the house is doing energy-wise. Good question! I still think it's premature to pass full judgement on how we did (I feel like we really need a year's worth of data and, given some issues we've had with the HVAC system, perhaps at least two years), but what the heck, let's see how we're doing so far...

Since we use multiple sources of energy, the first thing we need to do is combine the energy from electricity and natural gas into one number. That requires (in the U S of A, at least) converting energy use into BTUs (British Thermal Units):

We currently have data for a seven month period from July of last year through January of this year. Using the above conversions, calculating an average monthly energy consumption per square foot (based on a 2,281 square-foot house) and then multiplying that by 12 to get a yearly number, we come up with a projected annual energy consumption of 28,876 BTUs per square foot.

The plot below from U.S. World News shows millions of BTUs per occupant per year (the blue bars) and thousands of BTUs per square foot per year (red bar) and trends over time in the vintage of the housing stock. Not surprisingly, the trend is down as houses get more efficient. Since a metric based on the square-footage is a better metric of how a house is performing, that's what we'll focus on in this post. 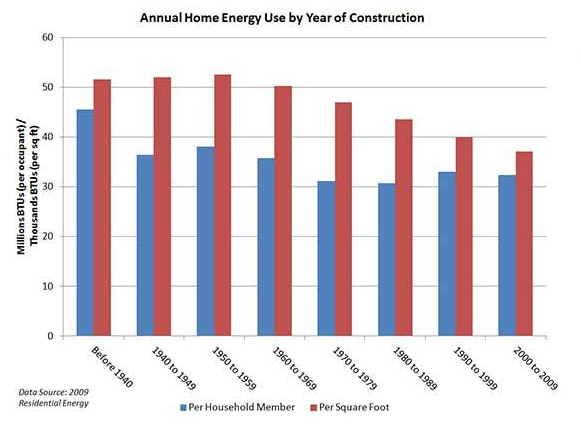 (click on that sucker if you want to see it BIG)

According to the Department of Energy's 2010 Buildings Energy Data Book, an average American home (all home stock) used 94.5 million BTUs in 2005 (Table 2.1.10 of that report). Ours is currently at 66.1 million BTUs, about 70 percent of the average American home. Focusing only on the West South Central part of the country, the average household use was 82.4 million BTUs in 2005 with 56,600 BTUs per square foot. Compared to the average home in our part of the country, we use about half the energy per square foot.

Looking back to our old house built in the 1880s (and doubled in size to 1,100 square feet in the 1910s), it used about 83,000 BTUs per square foot. That means our current per square foot usage is only 35 percent of what we were using before! Despite having a house more than twice the size of our original place, we use about 30 percent less total energy than the old house.

The downtown apartment? We used about 12,000 BTUs per square foot. (Big giant envious) gulp. However, we had neighbors on four of six sides warming and cooling our sides. Nevertheless, apartment/condo living has a much smaller energy footprint.

Although we toyed with trying to build a passivhaus, we ultimately abandoned that (potential) goal. Nevertheless, how do we compare to that Germanic ideal? Annual energy use in the passivhaus standard for heating and cooling cannot exceed 4,755 BTUs per square foot; we are currently at about 11,000. Looks like we missed that one... According to passivhaus standards, total energy usage should be less than 38,000 13,300 BTUs per square foot. [See notes at end. I wrote Passive House US about the mistake on their site. No response... Seems pretty basic to get that number right, doesn't it?] That kinda shocks me and makes me wonder if the hausers made a conversion error somewhere (otherwise, what the hell are those Germans doing behind those thick walls and tiny closed curtains?!?!). I find this hard to believe because that would mean that half of newly built homes in the United States (assuming a normal distribution...) meets this particular passivhaus standard! And ultimately, who gives a hoot on how much energy you use for heating and cooling: Total energy consumption should govern the standard.

Assuming the hausers know what they are doing, we totally miss the passivhaus standard for heating and cooling but totally kill it on total energy consumption. Passivhaus in spirit?

We've had some issues with the HVAC dumping air upstairs that surely caused us to use more energy than we should have (down to 60 degrees in the summer, up to 98 degrees in the winter!), so we're working to address those issues. That should reduce overall energy use. We're also in the process of replacing our halogen bulbs with LEDs (and yes, Green House Lady, we're installing a timer for our front "porch" lights...). We also plan to employ our energy measurer to see where there may be phantom power issues. Our current baseline power use (that is, power use without heating and cooling) is about 700 kilo-watt hours per month whereas it was about 270 in the apartment and 650 to 900 (growing over time...) in the old house.

a vaguely fascinating side point...

Here's a screen capture from the Passive House Institute US: 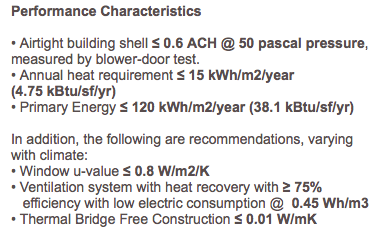 It appears the total energy usage of no more than 38,000 BTUs per square foot per year is accurate. Holy guacamole!

However, Building Science Corp reports a whole house energy consumption goal of 13,300 BTUs per square foot per year, which makes a lot more sense as a passivhaus goal. In that case, we're a wee bit beyond twice the goal.

Email ThisBlogThis!Share to TwitterShare to FacebookShare to Pinterest
Labels: energy use, green, passivhaus