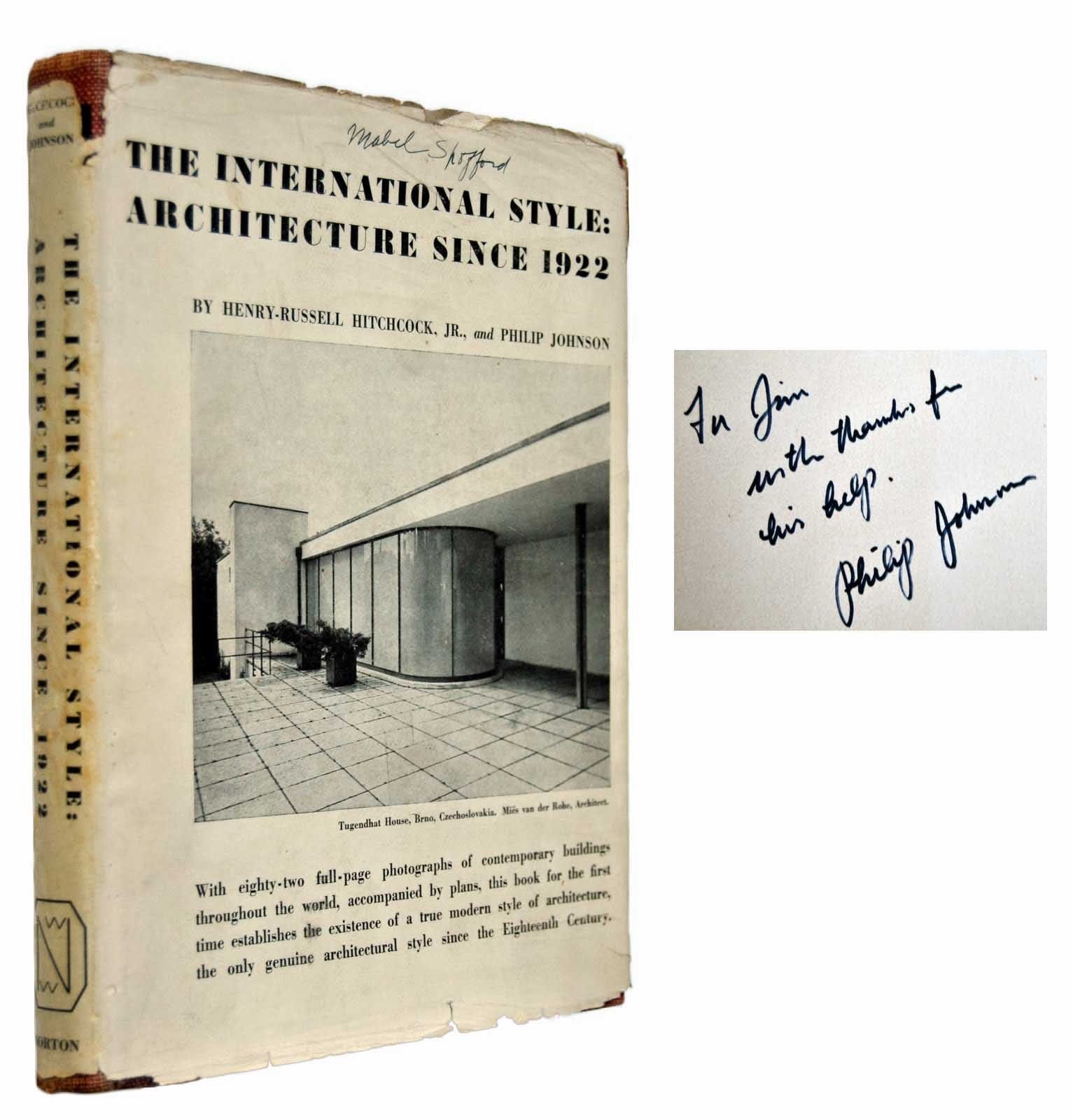 “Architecture is always a set of actual monuments, not a vague corpus of theory.”

I saw a post somewheres of this book for sale, an original 1932 version signed by Philip Johnson, for $9,500, and thought “Hot doobie-dang! I need to read that sucker!!!" Fortunately I was able to do so by buying a later reprint (1995) at a much lower cost. As added bonuses, the reprint includes a 1951 article by Hitchcock focused on the 20 years after publication of the original book, a 1966 foreword by Hitchcock, and a 1995 foreword by Johnson. All for fifteen bucks!

Johnson’s foreword is entertaining (written 63 years after the original publication!) and sets the 1932 stage in such a way as to lower expectations about the book. He recalls that he had been put in charge of the architectural wing of the Museum of Modern Art two weeks after meeting the museum’s director despite knowing nothing about architecture (“You will,” replied the director).

The book is a fantastic and fascinating read. Despite Johnson calling it, in his opening retrospect, “preachy and schoolmarmish“, I found it appropriately flexible in defining “The International Style”, noting that there are many exceptions to the “rules”, especially in the hands of talented architects. Johnson’s wincing hindsight is perhaps colored by the fact that he later abandoned the International Style. “The International Style had a longer life, it seems to me now, than ever it deserved.” he writes. 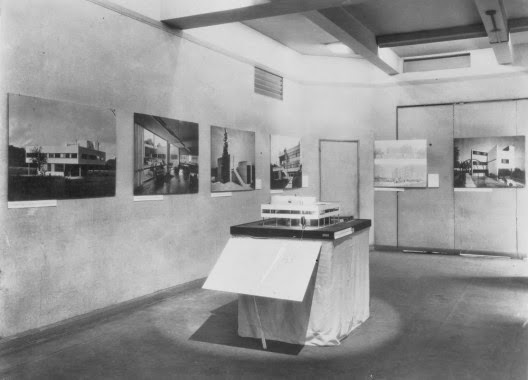 A photo of the MoMA show. Note the hordes.

Johnson notes that Hitchcock wrote the book but that they acted as a team in choosing the works for the 1932 museum show and in debating the merits of what was and what was not modern and what was and what was not good modern. He also notes that the show and accompanying tome were not that popular, both in terms of attendance and attention by the press and in terms of acceptance by the architectural world. Nevertheless, the show served as an important benchmark in architecural modernism, prompted dicussions as to whether or not the new architecture was a style, introduced modernism to a larger audience in the United States, and ultimately planted the seeds for Mies van der Rohe and Walter Gropius to come to America as the Nazis became more powerful and domineering right before World War II.

As in many things in this technology-driven world, Hitchcock and Johnson explain that there are two stories to the history of Modern: the story of building technology and the story of aesthetics. On building technology, the introduction of steel construction followed by steel-reinforced concrete that opened a path for Modern. On the aesthetics side, the story is more complicated, but boils down to the architects of the day rebelling against the architecture of the past: “[t]he individualists decried submission to fixed aesthetic principles as the imposition of a dead hand upon the living material of architecture...”.

Hitchcock and Johnson describe the roots of modern tapping into Greek architecture (think Parthenon) and the ideological part of the neo-Gothic movement. They observe that, in Greek and Gothic architecture, “the aestheic expression is based on structure and form” rather than ornamentation. The neo-Goths rebelled against neoclassicism and demanded to see the structure of a building (think flying buttresses). Hitchcock and Johnson also identify Karl Schinkel, John Soane, and Henri Labrouste as well as Henry van de Velde and Aguste Perre as early precursors of Modernism. 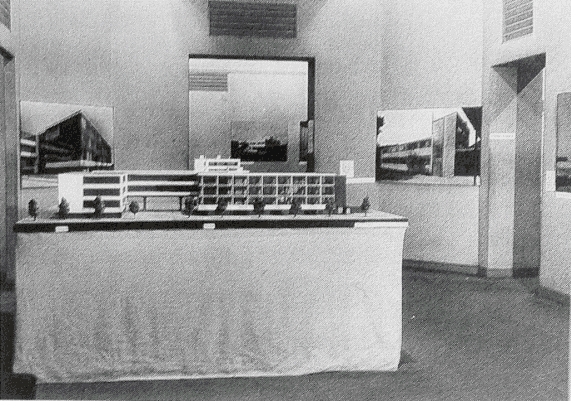 Hitchcock and Johnson bow towards Frank Lloyd Wright’s hefty contributions to Modernism with his open planning of interiors and designs of planes existing freely in three dimensions (a precursor to and influence of Neoplasticism). As the authors note, “Wagner, Behrens and Perret lightened the solid massiveness of traditional architecture; Wright dynamited it.” The authors further note that Corbusier advanced the open plan, and Mies further advanced it (and ultimately mastered it, really, in domestic and institutional construction).

Hitchcock and Johnson identify Le Corbusier, Oud, Gropius, and Mies van der Rohe as leaders of the movement (years later Hitchcock acknowledged that Rietveld should have been in this list instead of Oud). 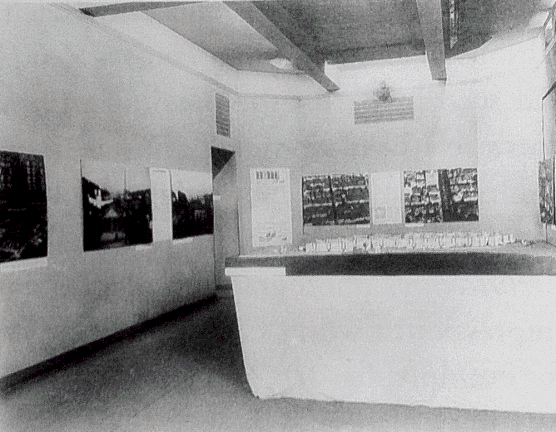 Hitchcock and Johnson spend the rest of the book identifing the principles of the International Style: (1) Architecture as Volume, (2) Regularity, and (3) Avoidance of Applied Ornamentation (with a bonus mini-principle: Surfacing Material).

Their first principle, Architecture as Volume, concerns using columns to free space in the interior and along the facade. Columnar support allows for window walls and ribbon windows (long horizontal windows). Hitchcock and Johnson also consider asymmetry in the functionalists' light noting that “[t]he mark of a bad modern architect is the positive cultivation of asymmetry for decorative purposes.” They also express a general, but not absolute, distaste for gabled roofs, preferring roofs of a single slant if a flat roof was not possible. They also acknowledge site: “Choice of site, and the arrangement of buildings upon those sites: these are the prime problems of the international style in relation to natural surroundings.” They deem curves to be appropriate, especially if included for functional purposes such as a stairwell or a water tank (functionalists didn’t like curves because they were [and continue to be...] expensive). Critiques of buildings later in the book also show an appreciation of the expression of individualism.

Their second principle, Regularity, concerns consistency in design. For example, the spacing (and subsequent rhythm) of supports and windows and the consistant use of materials.

Their third principle is Avoidance of Applied Decoration. They call for no ornamentation, simple window construction, and clean parapets. They note that the building itself is ornament: proportions, fenestration, railings. Interestingly (and unexpectedly) they are not anti-color and instead note that “...color should be both technically and psychologically permanent.” Many of the architectural examples presented in the book include color (described in the caption since the original photographs, and hence the book, were published in black and white). They note that art and sculpture should not be fused with the architecture and decree (correctly!) that Modern architecture makes a great backdrop to art. They explain that “[t]here is no better decoration for a room than a wall of book-filled shelves.”

The bonus mini-principle is Surfacing Material, referring to the continuity of material, typically smoothness, typically through stucco. Interesting that it shows up in the text after the first principle instead of the last, where it makes more sense.

The biggest controversy spawned by the book was whether or not the architecture described by their term “The International Style” was, in fact, a style. The proponents and practitioners of the new architecture protested emphatically that it was not a style, since they were trying to define a universal architecture (ironic when you consider they were creating a new dead hand to lay upon future architects). Furthermore, calling something a "style" was the same as placing a tombstone at the head of the movement. Styles become outdated; therefore, innovators of the time were attempting to create a new and everlasting movement of architecture. Nevertheless, the moniker stuck. Hitchcock and Johnson allude to there being a single time and place where there were no architectural styles because “...there were no styles in the Garden of Eden!” 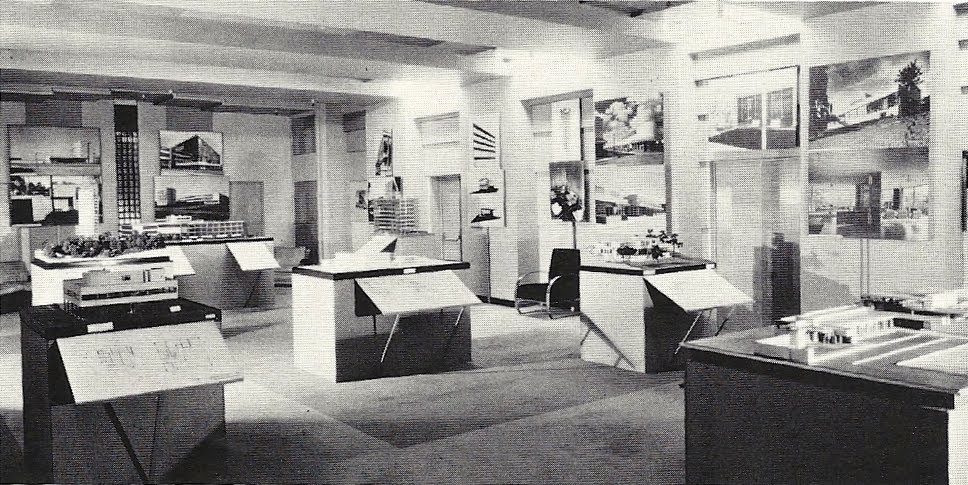 Included at the end of the book are a large number of photographs of buildings in the new style. The captions are entertaining as heck as the authors, in their mid-twenties, critique various structures:

“The top balcony is unnessarily heavy.” about a Gropius building.

“The projection of the roof cap is unfortunate.” about a Gropius building.

“The design [is] complicated by the various projections and the confusing use of metal and stucco spandrels...” about Richard Neutra’s Lovell Health House.

“The fenestration is arbitrary and complicated.” about an apartment building by Hans Scharoun.

“Clear design marred by bad window detail.” about a house by Hans Schmidt.

“Unfortunate contrast of vertical and horizontal brick courses.” about a house by Lois Welzenbacher.

I imagine these pocket-critiques were what Johnson was referring to when he dismissed the book as “preachy and schoolmarmish” (and justifiably so). Interesting that the text was so accommodating while the captions were highly judgmental.

Nevertheless, also included in these photos is something that makes my inner feminist smile: recognition of Charlotte Perriand (interesting that her name was later dropped from “Corbusier’s” furniture), Lilly Reich (similarly later dropped), and Helene de Mandrot. Cool. (Although they dod not include Gray's E-1027 house built in 1929.) 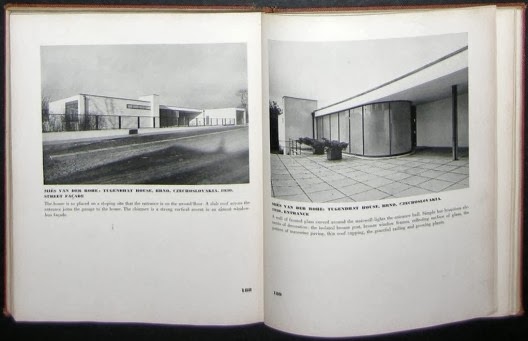 Sadly, none of the later writings mention omitting R.M. Schindler, the father of West Coast Modern and a major influence on Nuetra (although Hitchcock and Johnson were too enamoured with the Europeans to care, I reckon). After Schindler died, Johnson wrote:

"R. M. Schindler was among the great pioneers of modern architecture in this country. His work was not only great in itself but had a lasting influence for the good in later modern development. His single minded devotion fo the main principles of architecture was extraordinary and should serve as an example to the younger architects of our time."

Johnson later blamed Neutra for Schindler’s exclusion, accusing him of hiding Schindler’s work that would have most likely gotten him into the show had Neutra taken him there. Nonetheless, the oversight wasn't so large as to deem later mention and inclusion in subsequent versions of the book.

In Hitchcock’s 1951 retrospective, he writes that he would have replaced ornamentation with articulation (!!!), would have called early efforts “early modern” instead of “half modern”, and would have included Wright as a modernist based on the Yahara Boat Club and the Elizabeth Noble apartment building. A big part of the reason for this was his later architectural love affair with Wright climaxing in 1942 with a book titled “In the Nature of Materials, 1887-1941: The Buildings of Frank Lloyd Wright”.

All in all a visionary book that is still relevant today. The biggest shock to me was the acceptance of color. The limitations of black and white photography created a constant palette, but the birth of the International Style was quite colorful! 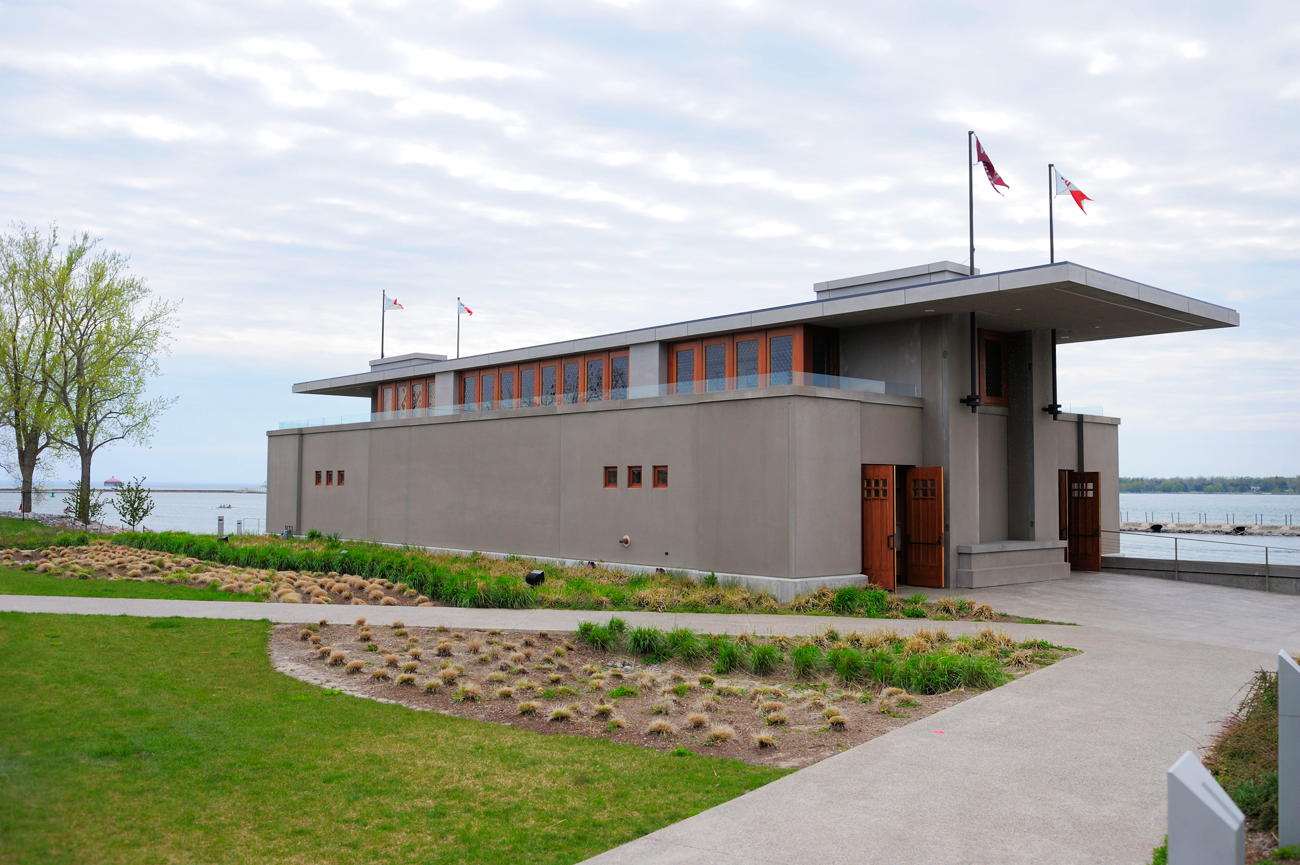 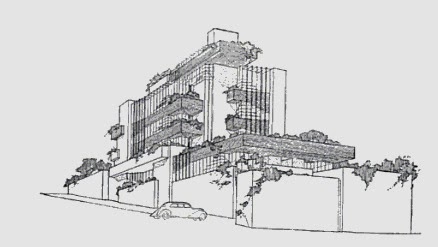 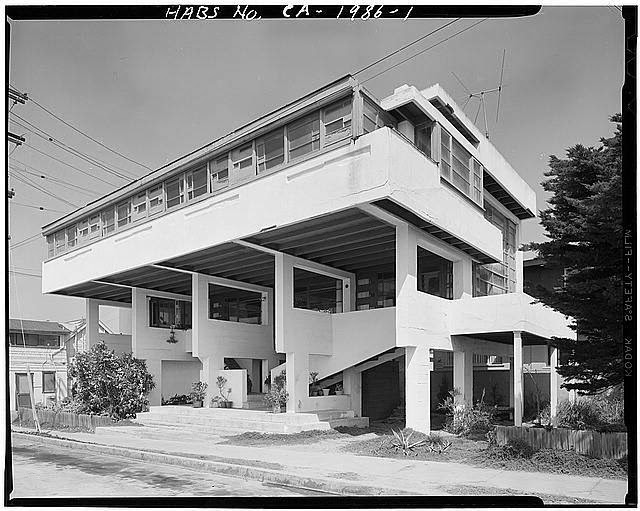 Posted by bubba of the bubbles at 6:55 AM