haiku for the book "How House: RM Schindler" by James Steele 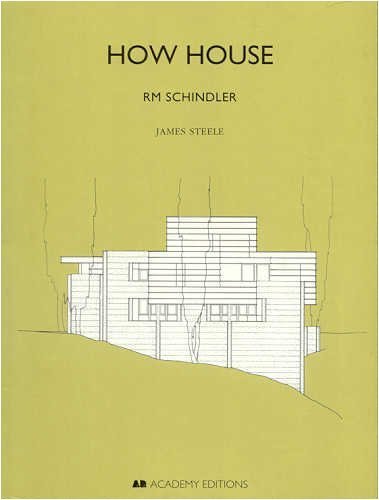 you ask yourself "How?"
nestled amongst rolling hills.
interlocking joy...

Built in 1925, this remarkable piece of early Modernism is comfortably perched on a Silverlake hilltop, a beacon of radical architectural thought. The author, James Steele, notes in the first sentence of the book that the How House is "..arguably the best house that Rudolf Schindler ever designed...". It is, unquestionably, a beauty. It's also shockingly ahead of its time. Now almost a hundred years old, it could have been designed yesterday.

James Eads How inherited a fortune from his father, James Buchanon Eads, who invented a diving bell that supported a successful salvage company. James Buchanon also designed the ironclad gunboats the North used to defeat the South's navy during the Civil War. After he retired, his restlessness led him to designing and building a steel-superstructure arch bridge in St. Louis, an engineering feat.

After he graduated from Havard Medical School, James Eads How attempted to donate his inheritance to the National Socialist Party, but his family stopped him through the courts. In response, he dedicated his fortune to assisting the homeless.

Given that How's socialist politics brought him through the Schindlers' gatherings at Schindler's own house, Schindler designed a practical house with radical aesthetics, greatly advancing Frank Lloyd Wright's architectural vision.

This 80-page book, published in 1996, is for Schindler diehards, and includes many diagrams and photos as well as a detailed architectural critique. We were fortunate enough to not only tour the house but attend a reception there to hear Judith Sheine speak about the house and Schindler. The place is gorgeous and well-thought out and detailed.