The nudge for getting the wifi extenders up and running was to get a signal from the wifi network out to the garage such that we could hook the energy monitoring from the outbox to the interwebs. After a visit from one of Pecan Street's electricians (a nice dude that was in Crust as well as a number of other local bands I know about [as well as a friend of a friend]), we got the system all hooked up. Fortunately, the data systems Pecan Street uses stores its data, so although we were down for about six months, all the data was there for inspection.

One cool thing about the system is the ability to see the contribution from our solar energy system (see graph at top where red is total energy consumption and green is energy generated from solar). You can pick out the annual cycle (summer energy use peaks), weekly cycles (we use more energy when we are home during the weekends), and daily cycles (more energy when we are home in the evenings).

We can also see what our energy consumption and generation look like at various time scales as well as real-time (the bar on the right which shows, at that moment, more energy being generated than being used).

The graph immediately above shows energy consumption from the dinner party we hosted Saturday night (to remember a friend who passed away 10 years ago) for about a dozen or so folks (lower temp setting on the thermostat, doors opening and closing [and sometimes not closing...], fridge opening and closing, lights galore, music). You can also tell when the party ended (about 1 AM).

You can also see a pattern of higher energy consumption in the evening when we get home, and you can see how the bride lowers the thermostat right when we go to bed (she needs it COLD to sleep). The HVAC kicks on at a higher level for about an hour at to attain the target temperature, runs for an hour or so at a lower level, and then cycles on and off all night. The power consumption pattern of the HVAC has me wondering about the variable-cycle compressor we're supposed to have. This looks, by my eyes, like how a two-cycle compressor would work rather than a variable-cycle compressor. This has me wondering about the installation/programming of the thermostat...

Another neat thing hidden in the energy monitoring system is being able to track individual circuits to see how certain appliances are doing. It doesn't look like I posted about this earlier, but back in December the refrigerator went out for about two months (Whirlpool should be ashamed of itself, since it was selling defective merchandise in the hopes it would last through the one-year warranty). It was something of a slow death that took FOREVER to recover from with two sets of technicians employed before the problem was figured out.

Here's the energy consumption history of the fridge: 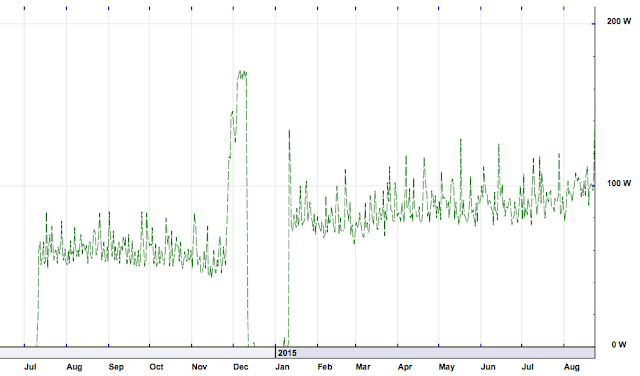 You can see that something clearly started going wrong toward the end of November when the energy consumption doubled from about 70 watts to more than 150 watts. After the thing was fixed, it had a new baseline of about 80 to 85 watts. Pecan Street's electrician said this suggested that something was still wrong with the fridge (it's been noisier than it was before, that's for sure). You can also see that slowly, over time, it's consumption has increased to 100 watts, suggested it's on a slow road to death. Sigh... So much for having an energy-efficient (and quiet) fridge.

The novelty of this stuffs wears off fast. I hope at some point to investigate energy consumption about the house to try and optimize (and minimize) our consumption. This circuit-by-circuit stuff will be helpful in this effort. I also now know that when something electric is acting wonky to check out its energy consumption for clues on what might be happening. Pecan Street is using the data to monitor energy consumption and generation at a number of houses across town and the country. Once Tesla's batteries become available (the bride wants one bad...), I'm sure they'll be looking at those (and perhaps Pecan Street will have a deal on them for a study!). This also makes me want to get more solar cells. With the neighbor's tree down, we could get more solar and place it on the roof...

Email ThisBlogThis!Share to TwitterShare to FacebookShare to Pinterest
Labels: energy use, Pecan Street