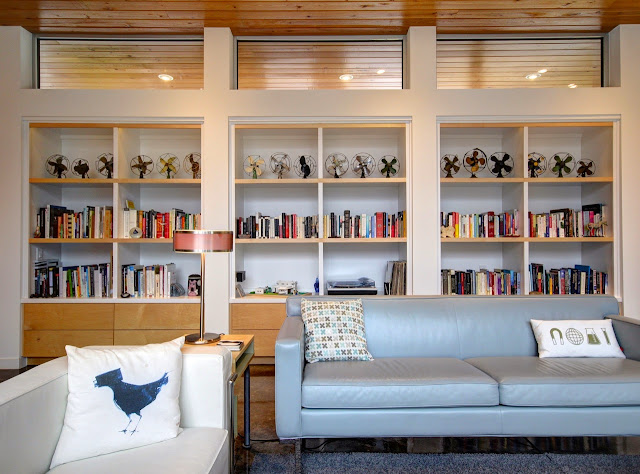 "There is no better decoration for a room
than a wall of book-filled shelves."

With the bride and I having something of an affinity for books (we have about a 1,000 of them in the house), the program for our house required a place for books. As noted above by the original arbiters of the Modern aesthetic, Hitchcock and Johnson, books are an appropriate decoration for a Modern house. However, they were probably influenced by their own bookish ways (book people are always fond of displaying their books, whether for ease of access or ease of impressing guests). Books can be rather visually messy, the opposite of minimalism. Others suggest that, in affairs of the heart, a person that doesn't display evidence of bookishness is not worthy of (ahem) rigorous attempts at procreation.

I broadly place decorating with books into two camps: (1) using books simply as props to decorate with and (2) using books as books but displaying them in an aesthetically pleasing way (which, of course, depends on the personal views of who is gawking at them). I would argue that Modernism demands the latter of the two. Books used purely to decorate are anathema to Modernism, which demands the abscence of applied decoration.

Here's a fine example of using books as props (which perhaps get most directly [perhaps too directly...] at the rigorous procreation issue): 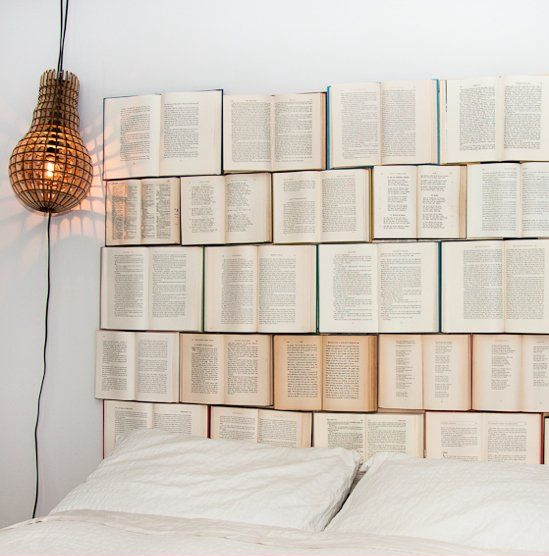 To avoid using books purely as decoration yet wanting to display them aesthetically, there are middling ways. 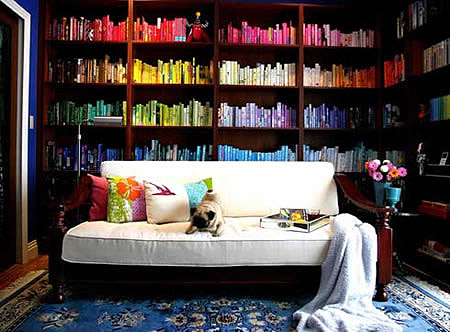 via Vintage and Nerdy

I actually have most of my books at my office organized by color, which, for me, works surprisingly well (I'm more likely to remember the color of a book than the author and title...).

There's the back-side approach which introduces some uniformity of color: 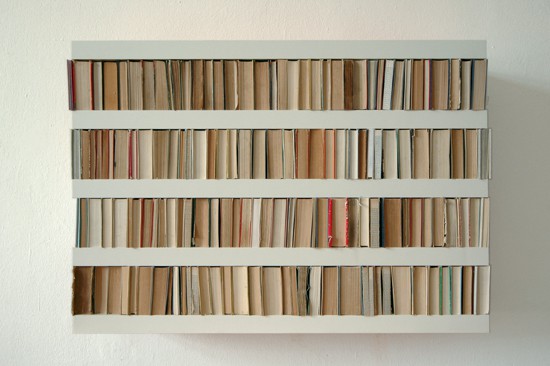 via nook and sea

I like the look of this, but this approach pretty much means you've (suspiciously...) given up on knowing what is where.

There's color uniformity (that is, only buy all white books): 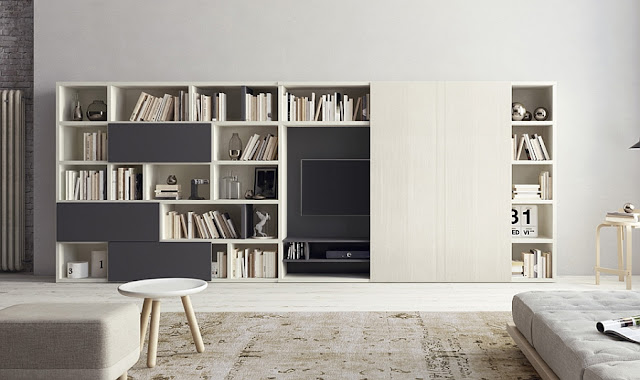 forgot to source this one...

But this is also suspicious (unless you also have a blue room, green, room, red room...).

Another option is to encase each book in white (or some other colored paper) and then lightly scrawl on the spine in pencil what it is: 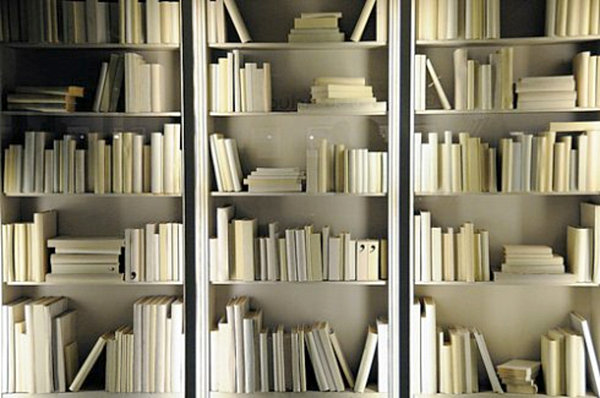 Nice look, but, wow, what a lot of work. I'd rather read a book.

For our house, we chose function with a wee bit of form. Our books are organized by broad topic (for example, architecture, cooking, texana, poetry, existentialism) and randomly placed as far as size and color are concerned (the architecture section is organized by architect). The one nod toward form is making sure all the books, regardless of width, are the same distance from the edge of the bookcase. To achieve this, we use the MAK Center guide to R.M. Schindler, which has the perfect width as well as a long spine for aligning a long string of books. 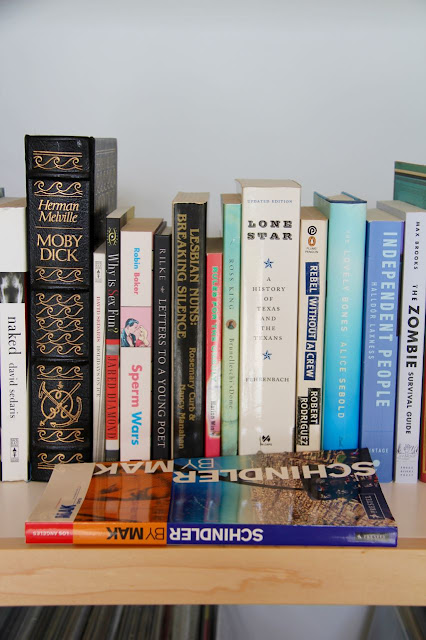 A good guide on Schindler as well as a good guide for lining up books. 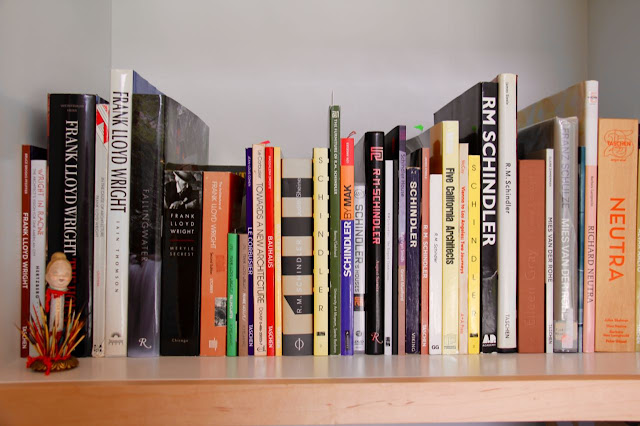 By aligning the books at a constant distance from the front, a nice line forms, adding just enough purposefulness to suggest this ain't a flea market.

The shelves in the living room hold about 350 books at the moment, so we've spent a wee bit of time choosing which books to include out of our general collection for general public viewing. Many are faves or collections of a fave author; others are placed to start conversations if someone sees it. Yet others I've purposely placed to raise eyebrows. 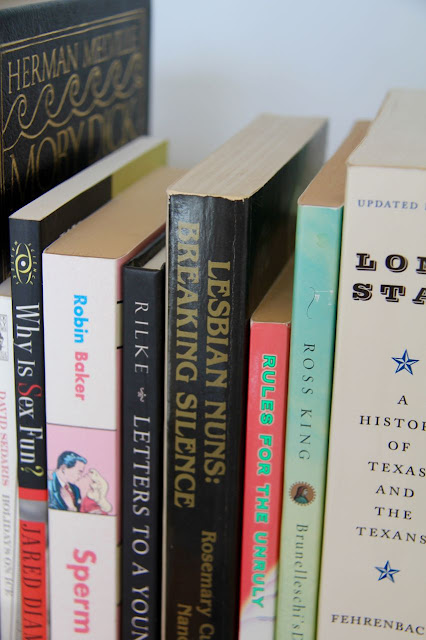 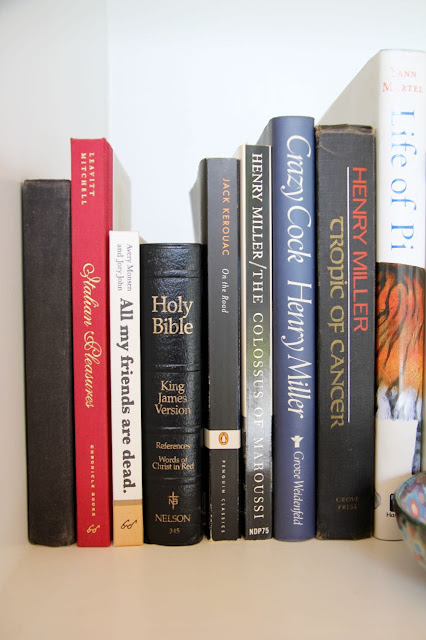 And sometimes, stacks are inevitable, like this pile awaiting our eyes... 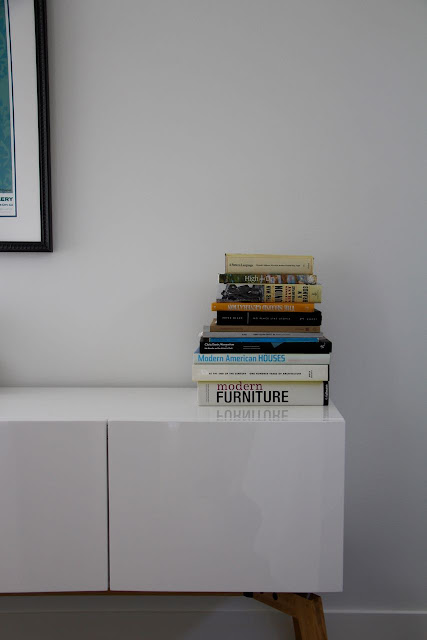 Email ThisBlogThis!Share to TwitterShare to FacebookShare to Pinterest
Labels: decorating