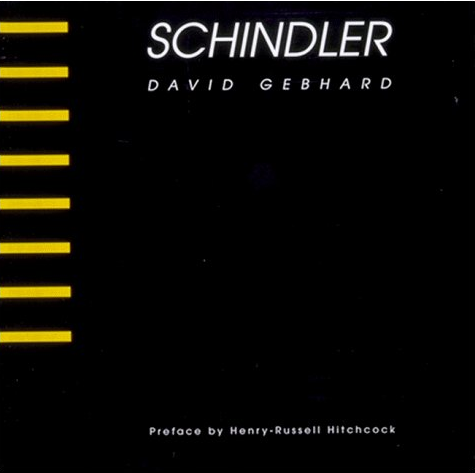 I just reread David Gebhard’s 1972 tome on R.M. Schindler (titled, appropriately enough, Schindler). I read it the first time back in late 2011, commemorated here in haiku. In fact, this book was the first one I read concerning Schindler and represented my first intimate introduction to the man and his work. I recently reread it for a new project I’m working on (details soon...), but I didn’t anticipate enjoying it so much (I'm generally loath to do things twice), in large part because I now know so much more about architecture in general and Schindler in particular.

Gebhard provides a cold sober academic assessment of Schindler’s work; this is not a fanboy’s appraisal of a dearly beloved architect. In fact, his book is the first serious text on Schindler (serious = annotated), coming about a decade after Esther McCoy’s landmark book, Five California Architects.

Here are some of the nastier assessments of Schindlers work:

“His attempt to combine the expressionistic mood of Wright’s architecture with the intellectual purism of Europe continued to produce ambiguity in much of his later work. Although conflicts such as this helped him to achieve a richness of detail and form, their effect was often negative.”

“Schindler aimed for the norm, ignored the extremes, and in the process compromised the full livability of his environment.”

“...he so rarely designed stairs that are a pleasure to use...”; “...his kitchens are generally small and dingy...”; “...he produced baths that are minimal to the point of being cramped...”

But these are balanced by these statements:

“For California and really for the rest of the United States in the early twenties Schindler’s Pueblo Ribera Court...was one of the most original multiple housing designs of the period.”

“A few perceptive clients sensed that of all the avant-garde architects practicing in Los Angeles, Schindler was the most revolutionary...”

"...for [Schindler's] contribution was two-fold. First, he transformed the symbolic image of the machine (as expressed in high art) into a former set of forms which would have the impact and vitality of low art; the language to accomplish this was to be found in the everyday building methods used around him in Southern California. Second, he sought to transform low art (the building and the way it was put together) into high art; and for him the high art aim of architecture was the creation of space."

And in a miraculous coup, Gebhard somehow engineered Henry-Russell Hitchcock to write the preface, something that amounts to an apology to Schindler and his place in architectural history. This is to Hitchcock's credit since he obviously didn’t need to make amends, especially considering that Gebhard provides ample space for not apologizing. Nonetheless, his and Philip Johnson’s oversight of Schindler’s work remains a major faux paus in their early assessments of American Modern, and Modern in general.
Posted by bubba of the bubbles at 12:02 PM