haiku for the book “Schindler” by David Gebhard 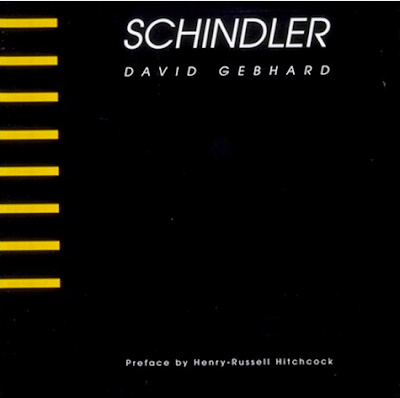 This was another consolation prize after failing in my search for a Richard Meier book (I needed a lot of consoling…). Having heard the name and after seeing stuff I liked among the pages, I picked it up.
Born in Austria, Schindler was strongly influenced by Frank Lloyd Wright’s Wasmuth Portfolio, so much so he moved to Chicago in 1914, the architectural center of the universe at that time. Wright hired Schindler to run his studio after he landed the commission for the Imperial Hotel in Tokyo. Later, Wright brought him to Los Angeles to work on several houses, including Hollyhock.

Due to low pay and Wright’s I-will-swallow-you-whole ego, Schindler set out on his own in 1920 (or so), working for a time with Richard Neutra, an architectural classmate from back in Vienna, before the relationship severed due to Neutra’s penchant for taking credit for joint work. Schindler built himself a house in 1922 known as the Kings Road House, a house considered by some to be the first house built in the “true” Modern style (following all of the Modern “rules”). One of his most famous houses, and considered one of the most important architectural homes in the world, is the Lovell Beach House, the same Lovells that later hired Neutra (some say Neutra stole that commission…) to design and build the California iconic Lovell House.

The book’s well written, although there is a smattering of misspellings and missing words—surprising given that this is the third edition. Sigh… (not that I should talk, but at least I’m an amateur…).
To my horribly untrained eyes, Schindler’s work strikes me as a pleasant collision of Wright’s horizontality and International Style’s mechanistic and monochromatic preferences. I’m drawn to his late twenties and early thirties designs which include these traits as well as a cubist sculptural quality that’s lots of fun for the eyes. A diagram of the House for Leimert Park is really what led me to buy the book, in part because it’s a house for a flat urban lot that looks (ahem) like something that would work for us.

More photos coming soon…
Posted by bubba of the bubbles at 11:48 AM