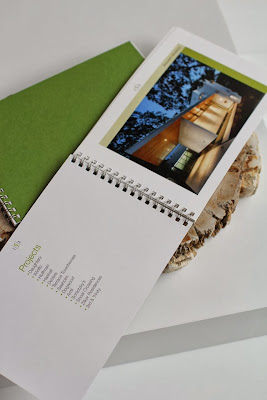 The architects were kind enough to invite us to a holiday shindig (back amidst the holiday season late last year) at a nice new restaurant they designed called Haymaker. At the shindig they were showing off a new swag rag that included our house as the first featured project!

During imbibitions and chatting with one of the architects, one of the architect noted that construction costs have increased substantially since we built out house. His guess was that our place, built today, would cost 50 percent more. Holy 2x6s, Batman!!! I'm not sure I believe that, but I certainly believe costs are higher. A lot higher. When we were closing out our construction loan, the banker, building a house of his own, was having to pay 10 percent more to keep subs on the project, and that was six months ago. 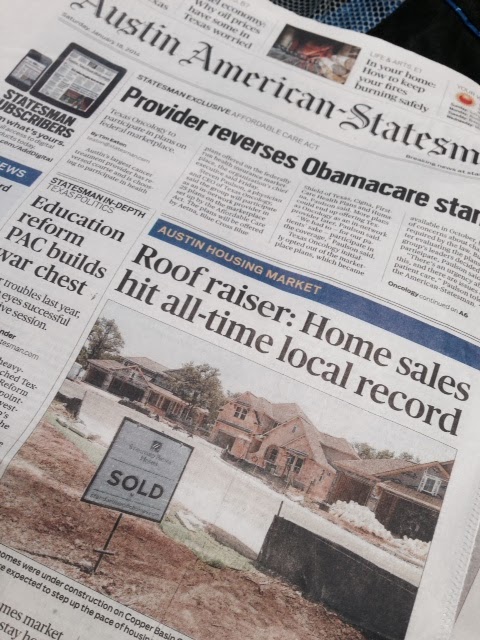 Since then, like a Formula 1 race car hitting the back straights, the housing market in Austin has kicked into a bee-buzzing high gear. As we headed down the path to build our house, the banking crisis hit, which made getting financing to buy a lot and build a house a bit of a challenge. On the negative side, buying a lot and building was a risk: Would the market recover? Was this going to be a disastrous decision? Would the real estate gods smile on us again? On the positive side, if we could get financing, the lot sellers (of the spec building kind) would be anxious to dump there lots and the builders would be hungry. That could save money (and ultimately did: I estimate our lot is now worth at least 80 grand more than when we bought it).

Now that the market has swung the other way, costs have apparently gone sky high. Not surprising if you think about it. The build market before the banking crisis was pretty hot, so the building industry grew to accommodate that demand. The banking crisis brutally reduced that build demand, so the building industry shrank considerably. Now that demand has come back like zombies starved for cerebral matter, there's a great deal of demand for new construction with a low supply of builders to do it. And prices go up. Economics 101.

This is something to consider if you're thinking of building during the early stages of boomtown. At some point building capacity, and thus competition, will increase and prices (may) come down. Our builder works with the same subs on his projects, so they are less likely to walk from a job, jeopardizing future work with the builder. Perhaps that something to look for when choosing a builder. And although we didn't have to worry about it when quoting out our house, it might be good to include an "appreciation cost" when soft bidding. In a hot building market with several months between soft bidding and building, costs may increase beyond your ability to cover.

Postnote: A little bird told me that even previously loyal subs are bailing out on their loyal builders. oof.

Postpostnote: Here's one. Had a friend have an architect bail on their project for a better and bigger one! At least said architect didn't charge them for services rendered, but my pals were still out their time invested up until that point.

Postpostpostnote: Another one of the architects told me that it would probably cost 25 percent more to build our house today than last year. I find that more believable  than the 50 percent more quoted by one of his colleagues. Still kind of a shocker, though...
Posted by bubba of the bubbles at 10:37 AM