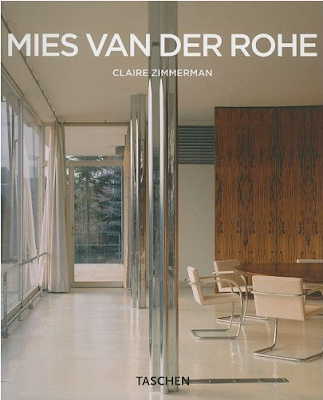 born in Germany,
his buildings are barely there.
less is more, he said...

It’s appropriate to summarize a book about Mies with haiku: haiku is poetry that’s barely there where less is, indeed, more.

Born Maria Ludwig Michael Meis in 1886 in Aachen, Germany, Meis trained to be a draftsman and eventually worked his way to Berlin and the architectural offices of Bruno Paul (in 1906) and Peter Behrens (in 1908). In 1912, Mies started his own office. Between 1915 and 1918, he served in the German military, after which he returned to his practice. His work during this period was nothing special.

A critical point in Mies’ career came when Walter Gropius rejected his submission to the “Exhibition of Unknown Architects” in 1919 for not being Modern enough. Mies used that rejection to fuel a re-evaluation of his theoretical foundation and embark on a philosophical and architectural phase between 1921 and 1924 called “Five Projects” by historians. “Five Projects” encompasses Mies’ full conversion into Modernism as well as his extension of it. This period includes designs of two high rises, a mid-rise, (these previous three are notable for how ahead-of-their-time they were) and two houses. None of the five projects was built. As part of reinventing himself, he rechristened himself “Mies van der Rohe”, the Rohe coming from his mother’s maiden name. (As an aside, “Mies” infers, in German, “miserable” while “Rohe” infers “pure”, so his name can be literally read as “miserable truth”!)

During his theoretical explorations, he wrote “We know no forms, only building problems. Form is not the goal but the result of our work. There is no form in and for itself... Form as a goal is Formalism; and that we reject. Nor do we strive for a style. ...it is our specific concern to liberate building activity from aesthetic speculators and make building again what alone it should be, namely BUILDING.” (When I read this passage to my bride, she swooned. Mies is her favorite architect.). Mies further called for “...absolute truthfulness and rejection of all cheating.” And, in an indication of how much fun he was at cocktail parties during this time, he wrote that “The nature of the technical is determined in its fulfillment... He who builds a factory as if it were a temple lies and disfigures the landscape.”

By 1926, Mies had come to realize that aesthetics and creativity had a place in architecture and that how people responded to space was as important as the space itself. His response to this realization was creating structures that allowed flexibility of interior space, explicit connections to exterior space through glass walls, and choreographing the architectural experience. In 1927 he showed a Glass Room at a Stuttgart exhibition that earned a lot of attention and noteriety. Other notable efforts in 1927 were the Weissenhofsiedlung apartment building [also in Stuttgart] and the Wolf House in Guben, Germany. He expanded on the concept of a glass room in 1928 with Villa Tugendhat in Brno, Czech Republic, and in 1929 with the German Pavilion in Barcelona (Mies also designed the chairs for the pavilion, now known as the iconic “Barcelona chairs”) and ultimately perfected the concept with the Farnsworth House in Plano, Illinois, in 1945 (for a house) and with the New National Gallery in Berlin in 1962 (for an institutional structure). It is through what he learned and developed in 1926 and 1927 that guided much of his career afterwards.

Starting in 1933, with the rise of Hitler's National Socialist Party and its preference for neoclassicism, many German Modernists left the country. Mies remained until 1938 (running Bauhaus out of a warehouse for a short while), when restrictions on his work and concern for his safety led him to Chicago and the directorship of the Illinois Institute of Technology. Mies’ reputation in the United States had been established by Mies’ inclusion in Philip Johnson’s influential International Style exhibition at MoMA in 1932 and Johnson’s continued fascination with Mies.
Mies and the United State were, in many ways, perfect for each other. With decisions primarily directed by the almighty dollar, Mies’ almost pure utilitarian approach with an emphasis on flexibility of space fit perfectly. Under these conditions, Mies helped invent the modern skyscraper, first exploring his vision with the Lake Shore Drive apartments in Chicago in 1948 and “perfecting” it with the Seagram Building in 1954.

Mies continued to work and explore his tenents of Modernism until his death in 1969 in Chicago. Although not mentioned in the book, Mies is credited with coining the phrases “Less is more.” and “God is in the details.” He also said of his own work “My architecture is barely there.”
This is the first of the Taschen architect series that I bought (picked it up at the Marfa book store which has a far better architecture section than any bookstore in Austin) based in large part on the recommendation of Bob Borson over at Life of an Architect (a wonderfully witty blog, btw!). The books are smallish soft covers but only 10 bucks and chock full of info including a biographical overview, vignettes on critical projects, career timeline, maps, further reading, and gorgeous photography. Highly recommended! I’m hoping Santa baby brings me more!
Posted by bubba of the bubbles at 6:55 PM