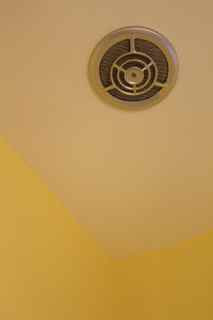 ACH is generally determined with a blower test. For a blower test, the house is closed up (windows and doors shut) except for one of the doors, which is sealed up with a blower. The blower blows air into or out of the home until the pressure difference between indoors and outdoors is 50 pascals. A pressure of 50 pascals is equivalent to the pressure if a 20 mile per hour wind of the pressure of 0.2 inches of water. In other words, not much, but enough to push air in and around your house.

Newly constructed homes should have an ACH50 of less than 8.0. Older houses tend to have an ACH50 between 10 and 20 and even higher than 20. A house with an ACH50 less than 5 is considered “tight”, between 5 and 10 is considered “moderately sealed”, and greater than 10 is considered “leaky”. For a 1 to 3 star rated home, the City of Austin expects ACHnat to be less than or equal to 0.65. For a 4 and 5 star rated home, the city wants to see ACHnat less than or equal to 0.5. The city will grant a homeowner/builder extra points in its green rating system if the house achieves an ACHnat no greater than 0.25. Passivhaus standards require ACH50 to be less than 0.6, which is approximately equivalent to an ACHnat of 0.03.

One standard for ventilation states that ACHnat + ACHmech should not be lower than 0.35 where ACHmech is mechanically induced ventilation. A more modern standard (ASHRAE 62.2-2007 and 62.2-2010) used by the city of Austin is a function of square footage and number of bedrooms (which is used as a proxy for number of people):

For a 2,500 square foot home with 10-foot tall ceilings and 4 bedrooms, ACHvent is 0.09. I’m sorry, but that seems pretty golldarn low. This calculation is heavily influenced by the number of bedrooms (for a 2,500 square foot 4 bedroom house, the square footage only increases the ventilation requirement by 1.1 percent). Furthermore, ACHvent decreases with increasing volume of the house when it seems like it should be the opposite (note that I modified the standard slightly by converting it to an ACH which introduces the volume term; nonetheless, even with my number molesting, the standard doesn’t take into account house volume). A table that ASRAE presents with its standards provides more realistic numbers, such as an ACHvent of 0.23 for a 3,000 square-foot house. I suggest using the table instead of the equation (Google ASHRAE 62.2-2010 to see the standard).

ACH also shows up with respect to bathroom vents. The City of Austin recommends a bathroom vent capable of an ACH of 8.0 to 12.0 and having that vent run for 20 minutes after use of the bathroom to remove heat and humidity.

I researched and wrote this up after being confused about passivhaus and City of Austin ACH standards. My confusion all boiled down to pressure (natural versus 50 pascals). With everything all cleared up now and Blaise being my homeboy, my heart no longer ACHes…

Posted by bubba of the bubbles at 3:19 PM