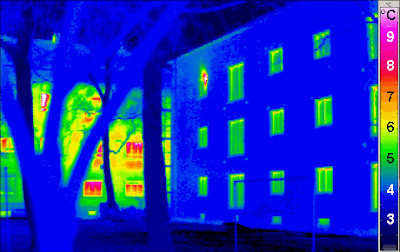 Probably the most atypical aspect of a passivhaus is its aggressive insulation. The walls and roofs are thick with insulation and even the slab or basement is heavily insulated. Consideration of passive solar is taken seriously. The windows are highly energy efficient and often triple paned (although double-paned will work). And the haus is nearly airtight.

A home typically has 10 air changes per hour with a 50 pascals pressure difference between the indoors and outdoors. Under normal pressure differences, this amount to half the air being changed every hour. A passivhaus has an air change per hour with a 50 pascal pressure difference of 0.6, 94 percent less than a typical home. Under ambient pressure conditions, a passivhaus, without mechanical ventilation, will only change out 3 percent of its internal air per hour. If the air change per hour falls below 0.4, air quality in the home suffers (the air becomes stale). Therefore, a passivhaus will vent out internal air and bring in external air to achieve an air change per hour of 0.4. You may be thinking to yourself: Say what?!?!!? I just made my house super airtight and now I’m going to leak it!!! However, unlike a normal home where that fresh air is coming from wherever the home’s perimeter has been compromised, a passivhaus knows where the air is coming from and can filter and pre-condition it.
When a passivhaus exhales, it can harvest the heat from that air and feed it back into the home. A passivhaus in Germany is typically just heated by body heat and heat from lights and appliances. That’s crazy cool (or hot [or something]).

Proponents suggest that building to passivhaus standards only adds 10 to 15 percent to standard building costs but with a 90 percent reduction in energy use. Hmmm. That doesn’t sound too bad. Interestingly, many examples of passivhau have lots of windows, so such a house doesn’t have to be a cave. And the results are quite impressive: 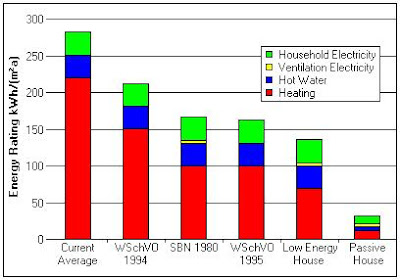 (chart from the Passivhaus Institute)

Note: R-value is the inverse of U-value; however, both values, although generally reported without their units, are unit dependent with U-values in metric units (watts per square meter per Kelvin degree) and R-values in English units (feet squared degree Fahrenheit per btu). To convert U-values to R-values, take the inverse of the U-value and multiply by 5.68. Your metric U has now been English R’ed!
Posted by bubba of the bubbles at 7:47 AM