a lot of camping 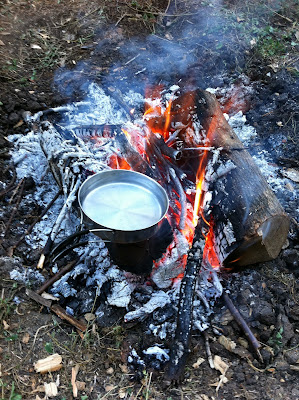 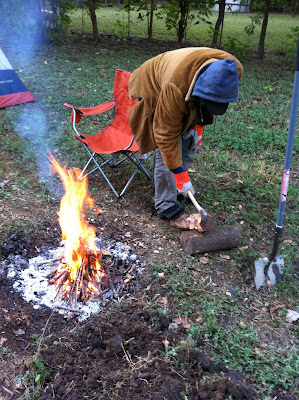 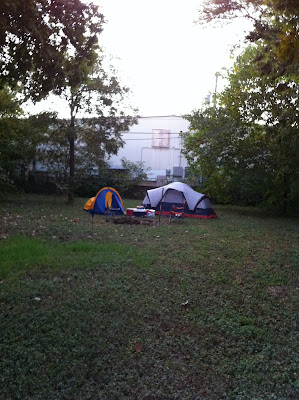 “I have an unusual request…” came the email from The Architect.

After we bought the lot in late September, we signed an agreement with The Architect in October to design a house. I told him that we weren’t in a pants-on-fire rush to start construction because I didn’t want to start building until early next summer. My job gets a little crazy and unpredictable every other year in the spring. Because I read that it is a good idea to frequently check on progress while building (frequently as in every freakin day), I decided I did not want to be building a house during my busy work time. There is only so much stress a dude can take. That gave us some breathing room to think about the house and not rush design.

As it turns out, The Architect  was a little busy with another project, so the non-rush worked out on his side as well. With his schedule freeing up a little bit, he reached for his sleeping bag. "I want to go camping on your lot, and I want to do it with y'all. Are you in?" My bride immediately said “No way. Where would we pee?” Not a surprising response as her idea of roughing it is staying in a hotel without room service. Me? I responded with “Hell yeah!” It was a kooky idea, and I’m all over kooky ideas. Besides the kookiness, it would give us a chance to spend some quality time with the land and to chat about this and that (including the home-to-be). All it would cost us were the vittles.

Time was of the essence. The end of the year was upon us with its cooler temperatures, and cooler temperatures combined with large amounts of beer dangerously increases the odds of same sex cuddling. We finally settled on a Friday in November with a predicted overnight low in the low 40s. I was already hooked into the neighborhood association enough to be on the neighborhood watch email list, so I sent a quick note about our plans to let the neighbors know that, although we look like bums, we weren’t (and that it was a one-night gig). “You’re going to spend the night in jail,” predicted my bride.

After setting up our tents, we drove several blocks over to the grocery store for provisions (ah, the challenges of the urban outdoorsman). Once we got a fire going (this involved some yard work in picking up branches), we popped the tops of a couple brewskis. After tiptoeing through the typical Texas taboo topics of politics, religion, and livestock, we talked house.


When working with an architect/designer, it's important that he knows what you like and expect. Hopefully your likes and expectations line up with your architect's. That makes things easier. One way of doing this is keeping a file of photos and what-not of what you like with some notes of what you like about it. These might be clippings from magazines or photos printed from the internet. This Website called Houzz offers a free service to do just that with their large and ever-growing collection of home photographs. Since I can make and host web pages, I chose to pull our want list and photos into a web page. I also made sure to include helpful phrases such as wanting "quiet drama" in the foyer and a "large but cozy" master bedroom.

The Architect said he had never had a client put together so much information for him. I'm not sure if that's a good thing or not, but I assume it is. Information is good. I think he said it would have taken 83 pages to print it all off, so perhaps we overshared. However, much of it was photographs.

On the web page, we noted what we liked about the lot, what concerns we had, what we plan to do in the house (now and in the future), provided some design guidance (what we like and don't like), listed green features we'd like to see, and posted photographs of "precedents": Houses we really like. I also posted photos of the light switch covers we want.


After grilling some burgers, opening a few more beers, and waving at curious onlookers, The Architect explained that when he thought about us he thought of the book/movie "Where the Wild Things Are". Perhaps it was the beer, but I didn't quite know what he meant. He had a photo from the movie. It looked like a hamster den.

We may be a bit of a conundrum to The Architect. We want a modern house, yet we live in a place built in the 1880s. And the decor in our house, although there are a few modern touches, is mostly grandma. Or maybe, more accurately, grandma on some real good pain meds. When HGTV filmed at our house several years ago, the producer described us as maximalists. And it's true: There's a lot of stuff in our house, but I like to think that it's fairly organized. Over the years, our tastes have trended from grandma-country-shabby chic to modern and minimal. In my mind, a house dictates, to a certain degree, how it should be decorated. Our current houses yearns for country-eclectic. Aside from a few modern touches, you would never guess while perusing through our house that we are (now) modernists at heart. As I told The Architect: If this minimal modern thing doesn't work out for us, we can always junk the place up!

As our pile of aluminum recyclables reached higher and the evening stretched deeper into the dark, we noticed a good amount of traffic noise from the east; the subtle roar of rubber on grooved concrete, most likely from Highway 183, an elevated roadway some 25 blocks away. I hadn't ever noticed highway noise at our current house, deeper in the heart of downtown, but after listening the next day, we can hear Interstate 35. We've lived there for almost 20 years and never heard it before. Amazing how camping outdoors in town can recalibrate your hearing.

Sometime after 1 am, once the neighbors stopped gawking at us through their blinds, we called it a night and crawled into our sleeping bags. The Architect wisely brought a pooch with him who jailbreaked sometime during the night and thoughtfully cleaned the dishes.
After the Earth rotated us back into the photon spray of our solar system's star, I collected some wood, started a fire, and offered The Architect a breakfast beer (for the record: he declined). We ate donuts and worked up some scrambled eggs. I brewed the worst cup of coffee in the history of Western civilization. We packed up our tents and belongings after allowing the morning sun to disperse the dew. Our work was done. The lot had been christened.

And for the record, despite the cold overnight temperatures and large amounts of beer, we each stayed in our own tents.
Posted by bubba of the bubbles at 10:57 AM