get with the program 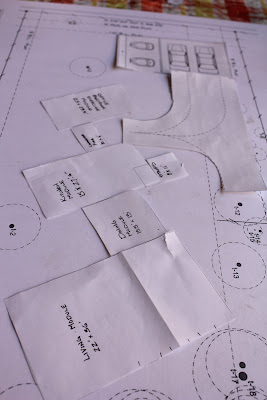 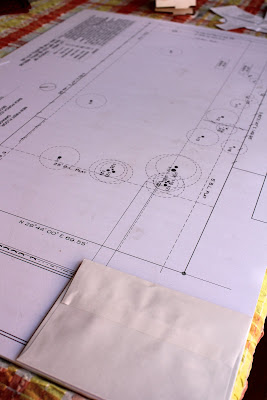 The Architect appeared at our door with a large foam-board-mounted printout of our lot and a herd of cutouts. The Architect said it was time to figure out the "program" for the house: What rooms do we want and where do we want them?

Some rooms are easy: Kitchen? Check. Dining room? Check. Bedrooms and bathrooms? Sure, but how many? And like an artist with a blank canvas or a writer with a blank page, it can be a little daunting to work out the details with a blank lot before you.

Although there are just two of us, we have to think about resale value to some degree. Therefore, we are looking at three bedrooms with an additional "flex" room that could also serve as an additional bedroom. For our lifestyle, these rooms will serve the purpose of (1) the master, (2) a guest room, (3) an exercise room, and (4) an office/studio. A little booshwazee for just two people, but this get-up would also handily serve the average 1.86 kidded family with an extra room to serve as an office, family room, or grandma's retreat.


Because of potential noise issues at the rear of the property, we agreed to place the master at the front of the lot on the second floor with the other two bedrooms. We've envied the treehouse feel of bedrooms on the second floor of other houses we've seen and think the ups and downs of the stairs will be good for our health. Also, we don't plan on spending our last years in this house; however, who knows where life will lead us? Therefore, the flex office-but-it-could-be-a-bedroom will go on the ground floor. Maybe we'll need to use it as a bedroom for us at some point, but hopefully not.

Next we talked about bathrooms. Obviously, the master suite will include one, but what about the other bedrooms? The Architect noted that some high-end houses these days have a bathroom for each bedroom, but that's too much for us to flush. Therefore, we agreed, at this point, to have a shared bathroom between the two extra bedrooms with access to that bathroom being on-suite for one bedroom and through the hallway for the other. That'll work swell with our intended purpose of a guest room. We also talked about the downstairs "public area bathroom", generally a half bath, being a full bath with just a shower. The Architect suggested that the office/bedroom have it's own bathroom, something we initially balked at but are now thinking about given the possible future use of said room. Choices, choices...

We're even talking about having a bridge to the roof of the "garage module" to use that roof space and provide a covered walkway to the house from the garage. With this module approach, The Architect is addressing our desire to have outdoor living spaces (these would be defined by the space between the modules) and a great deal of natural light. It would also make for an interesting house.

We also discussed building placement on the lot. We're fortunate to have a large lot for inside the city, so there is lots of space to work with. Originally, we thought the house would hug the northern edge of the property to take advantage of the potential for solar power, a slightly better view to the south, placement of the garage between us and the air compressor, and an existing driveway cut in the curb. However, this placement was not thermally ideal (you really want your back to the Texas sun) and, because of the substantial amount of real estate needed for a driveway turnaround (she ain't backing her car up that distance, at least not without casualties), much of the ideal garden space on the lot would be paved. So we flipped everything to the south side and feel much better about it. It even saves a tree or two. Early in the design phase, it's important to be flexible and openminded, weighing the pros and cons and listening to your designer/architect and carefully considering their thoughts and ideas.

We also chatted about orientation of the structures. Although our lot is approximately oriented west to east, it's about 20 degrees off. Therefore, to orient the house with the sun (something I very much want to do), the house has to be at a 20 degree angle to the street (something that doesn't set well with the bride's German blood and engineering degree). However, after several post-Architect conversations, she is willing to consider an angled house if there are street-parallel walls to take the angular edge off. Not only would an angled approach be better thermally, it would also (slightly) increase side yard space, give the street-side main module better views, help with drainage and, perhaps, give the project a little more visual interest.

With this feedback, The Architect will start to work up some more detailed, yet still general, plans. He wisely doesn't want to get too detailed too quickly to ensure we are both on board as the plans come together. Nonetheless, we got a lot worked out at our first meeting. Given how much fun it was to meet and talk about the program for our house (several hours went by like nothing), we can't wait to see what The Architect has for us next time.
Posted by bubba of the bubbles at 4:23 PM