if you go electric, go tesla (like I did) 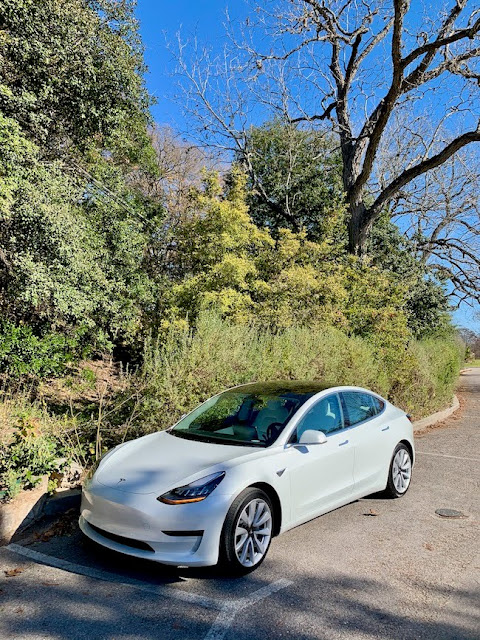 As it turns out, I didn't only get a toilet seat for xmas; I also got a Tesla (although technically it just happened to arrive the day after xmas)! As you may know, I reserved a Model 3 the night Elon Musk revealed the car and then promptly leased a BMW i3 not anticipating that the Muskman would not deliver the Model 3 on time. As it turned out, he did; but my delay in getting a Model 3 allowed (1) Tesla to work out the manufacturing kinks, (2) me to see if Tesla stayed solvent, and (3) me to assess whether or not I really wanted a Tesla.

First off, I'm completely sold on electric vehicles. My experience with the i3 was fantastic. The car was zippy, reliable, futuristic, and fun-as-hell to drive. Although I know that it is drawing current from the house, I honestly couldn't see the effects of the draw in our electric bills, lost as they were in the standard month-month climatic signature. It's also nice to not have to stop in at gas stations: no threat of card skimming, panhandling, breathing fumes, and smelling like gasoline after dancing on hydrophobic concrete. In fact, it had been so long since I'd been to a gas station that when I borrowed the bride's gasser and filled it up, I had forgotten our zip code to confirm our credit card! I would have kept the i3 except for one fatal flaw, a flaw shared by all non-Tesla electric vehicles: Lack of a viable supercharger network.

The i3 was great for getting around town and, generally, back-and-forth to work. But for long-distance travel (that is, longer than half the range of your car), the i3 was unusable. For example, up until recently, I could not realistically drive the car to San Antonio and back because there was not a single non-Tesla supercharger in the whole dang town (I believe there is now one—