is this it for our house? 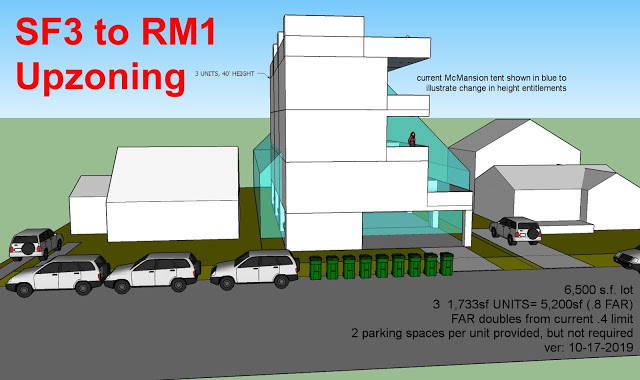 I hate to sound melodramatic, but our home's days are numbered.

Austin is expected to double in population from 1 million today to 2 million by 2070 and then double again to 4 million by 2120. As a result, the city is revising current city-wide zoning to allow for higher density, and, in some cases, including ours, density on steroids. And the city is hellbent on making it happen.

What does that mean for us? Because we back up to retail along Burnet Road, we are in what the city considers to be a major transit corridor where they want to increase density. Because of our proximity to the corridor, our zoning would change from SF3 (single-family) to RM1 (residential multi-unit). RM1 zoning allows six units (+ four bonus units) on a 5,000 square foot lot with 40-feet in height and a 10-foot front setback (instead of the current 25 feet). Because the lots in our part of the neighborhood are slightly above 10,000 square feet, we're looking at the potential of 20-unit apartment buildings coming to our single-family lots. Read that again because that is not a typo: 20-unit apartment buildings are coming to our single-family lots. There's no other way to put it except: Holy. Shit. This rezoning will be a death sentence for the current SF3 lifestyle in our part of Allandale.

Austin Upzoned, run by two architects in Rosedale, put together graphics showing implications of RM1 upzoning (see graphic above). Even this is not a worst-case scenario since they show three units without maximizing the full potential building envelope (setting aside personal concerns for the moment, that's actually a pretty nice design!). I love how Upzoned shows a herd of trash cans out front as well as consumed street parking.

We're not against higher density. When we bought and built on the edge of the neighborhood, we fully expected the retail property behind us to convert to mixed-use at some point. We like mixed-use, particularly the walkability and services that come with more people. But where is the mixed use along the Burnet Corridor? Yeah, there's some, but there's a lot of potential for more. Why isn't that a focus for the city?

Folks have also said, "Hey! Imagine how much money you'll make selling your property!" Who, exactly, wants to buy a house sandwiched between two 40-ft tall apartment buildings (unless it has a really, really good price)? Sure, developers might be interested. But where's the money going to go? For our street, we have original houses (1950s stock that goes for around $500,000 a pop) and newer houses (less-than-a-decade-old stock that go for around $1,000,000). Simple economics question: Which houses do you think the developers will want to buy? The rezoning will put all of the property value into the land. In the transition, since there will be more land than developers, I expect prices will go down across the board for newer stock before going up, perhaps years (decades?) down the road.

Folks have also said "Hey! Why don't you build an apartment building yourself and make tons of money!" What bank is going to loan novices like us millions of dollars to develop our land? "Hey! You could team with a developer!" And why would a developer want to monkey around with another partner seeking to maximize return when she can buy a lot outright and make all the money herself? And do we want to risk financial ruin if the economy tanks while we build?

Unless there are city incentives, this zoning won't result in affordable housing. It will result in more-affordable housing, but not more affordable housing since units will be far from affordable for median income earners. Maximum livable square footage for our lot, assuming first-floor parking, would be 21,600 square feet. That works out to a somewhat reasonable 1,080 square feet per unit. With building costs at, say $300 a square-foot and property costs at $50 to $100 a square-foot, units will go for $378,000 to $432,000 a pop (or rent at about $3,800 to $4,300 a month). More affordable, but not exactly affordable. (Note that the property value would increase to $8,000,000 under this scenario).

The odds of this passing are pretty good. Transitional zones only comprise 1.9 percent of all the zoned properties of the city, which means 98.1 percent are not directly affected and therefore don't care. Our neighborhood seems more wound up about bicycle lanes than corridor rezoning.

We're saddened by all this. We invested blood, sweat, and tears into building our dream home and planned to live the rest of our days in it and in this wonderful neighborhood. Now we're discussing plans to move, assuming we can afford it. We'll be sure to stay away from transit corridors, if not Austin, this time.

The code and the maps.

Staff answers to questions on the code rewrite. 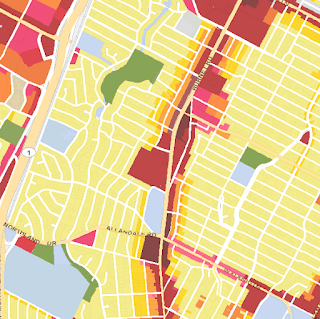 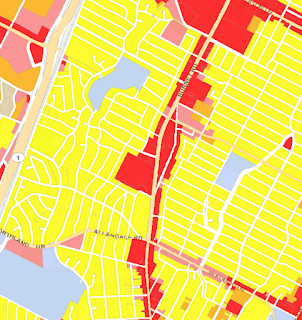 proposed zoning (left) and current zoning (right). The brown shading on the left is the proposed transitional zoning. 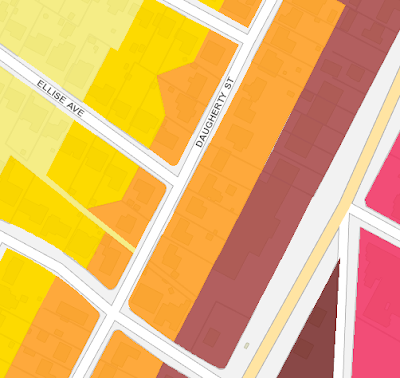 We are smack dab in the middle of that mess. See colors below for zoning. We are at the intersection of Ellise and Daugherty. The brighter yellow color is R4 zoning, which can have 4 to 8 units per lot.

City-provided details for the zoning are here (in case you think I'm making this up): 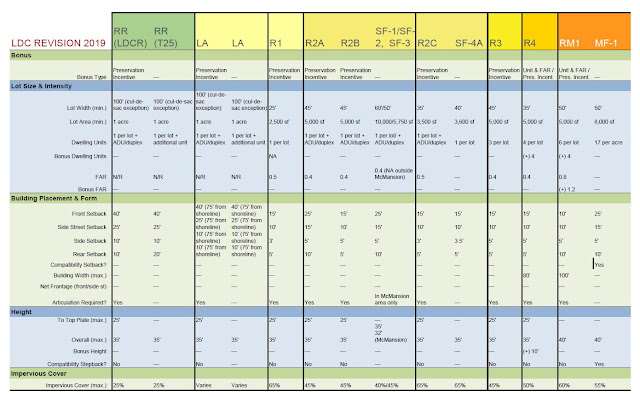 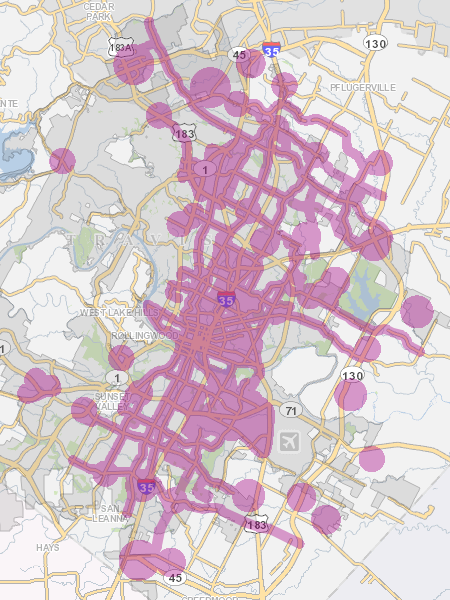