our fridge fell down the Whirlpool to hell... 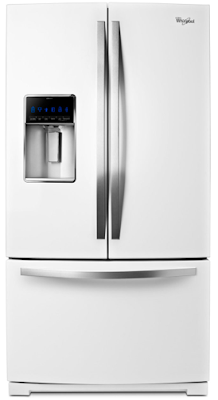 We put the Whirlpool fridge to death this past Sunday. It was a sad affair, really. Despite being gorgeous, versatile, and convenient, it suffered from an inconvenient truth: beneath it’s icy cold sheen, it was a dark steaming piece of bovine excrement with less than icy temperatures. While it sucks to have purchased a lemon, it really sucks to have purchased a lemon from a manufacturer that doesn’t care that it sold you a lemon. That's your problem.

On one hand, we should have known better: we bought a fancy new model with new technology. This, as it turns out, was a recipe for disaster. What's worse is that Whirlpool knew it and simply waited out its one-year warranty. If your fridge went out before the one-year warranty, you got a new version with the fatal flaw fixed. If your fridge went out after the one-year warranty, you got patchwork repairs until the the cost of repairs versus cost of replacement became prohibitive (not to mention that the repair was due to earlier botched repairs). Can you say “lack of integrity”? Whirlpool apparently doesn't care about its customers; after all, there are many more fools out there that will buy based on a familiar name. One would think a customer of one of their $3,500 refrigerators would deserve better. But that is not the case.

Shockingly, most high-end fridges suck (just look at Amazon or Sears reviews). Consumer Reports reviews individual models for this and that feature but not for longevity. Basically, the more expensive the fridge, the lower the reliability. That’s not to say that you can’t have a long-lived high-end icebox, it's just that it’s a game of Russian roulette: will the one you picked out be OK? Bottom freezer versions have lower reliability than side-by-sides and traditional top freezers do better than side-by-sides. In-door icemakers greatly decrease reliability (I suspect, based on online discussions,  our bottom freezer plus in-door in-refrigerator [as opposed to in-freezer] system with multiple compressors was the Achilles heel of our fridge). Our simple top-freezer no-nothing-in-the-gawd-damn-door icebox at our old house was still going strong at 15 years when we sold our old house. 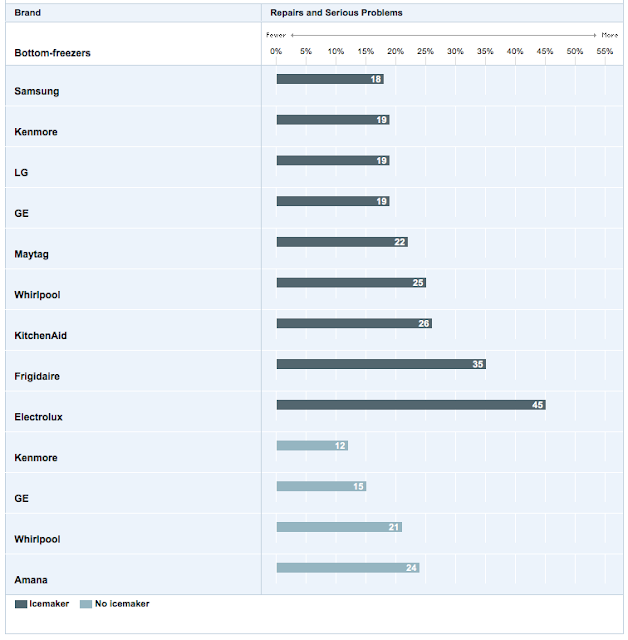 So to replace our Whirlpool, a brand we will never buy again, we bought a $1,000 side-by-side Samsung. We chose the sung of Sam due to its lowest repair record according to ConRep, the availability of smooth white as a finish, its simpler mechanical design (the icemaker is in the freezer), its warranties, and its affordability. Having bought it through Lowes, we also purchased their extended warranty (something we never do). Its not as pretty, and it's still something of a crap shoot, but perhaps the odds are more with us than Whirlpooling against us. 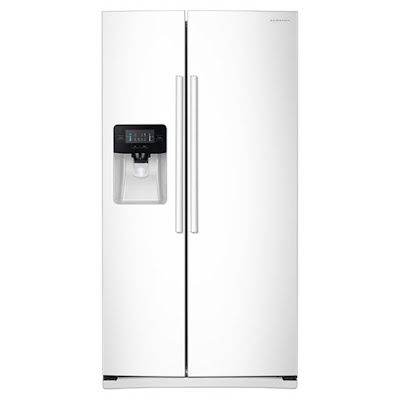 One cool thing about all this is that we could watch it happen via the power draw on the fridge circuit installed by the Pecan Street Project: 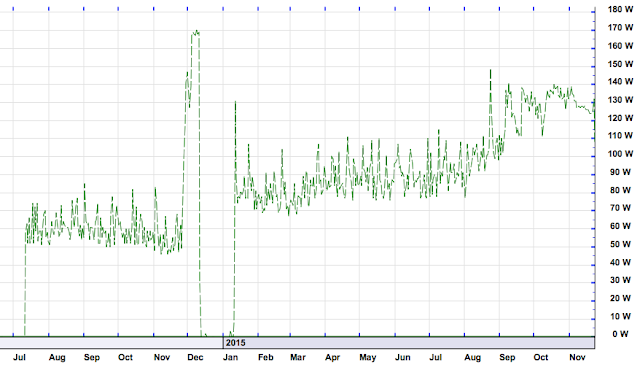 This is the long-term record on the fridge. The big spike at the end of November, five months after the warranty gave out, is when the fridge started to give out, one year and five months into its life. The one month flat line was how long we were without a fridge as they tried to figure out how to fix it. They fixed it, but it was drawing about 20 watts more than it was before: not a good sign that they had fully fixed the appliance. In April of this year it added on another 10 watts of power. Starting in August, it started drawing more power and then started acting up again. We showed the tech the graph above, and he was blown away as to what it meant. Said not to worry about the additional draw. After the fridge was fixed again (and we were told the next fix would cost $1,000), the power draw kicked up to about 130 watts, more than twice it was when new. It stabilized for several months after that before the temps started falling to where the freezer stopped freezing.

This shows exactly when something went wrong, sometime on November 5th. The spike on the 22nd is when a fridge arrived, the spike from having to initially cool things down.

You can also see how this fridge (a) uses power differently (cycling quite a bit more) and (b) uses more that the other one when new (slightly less than twice). Sigh. At least our stuff is frozen and (knock on wood) this fridge will last more than 2.5 years.