haiku for the book "Fallingwater Rising" by Franklin Toker 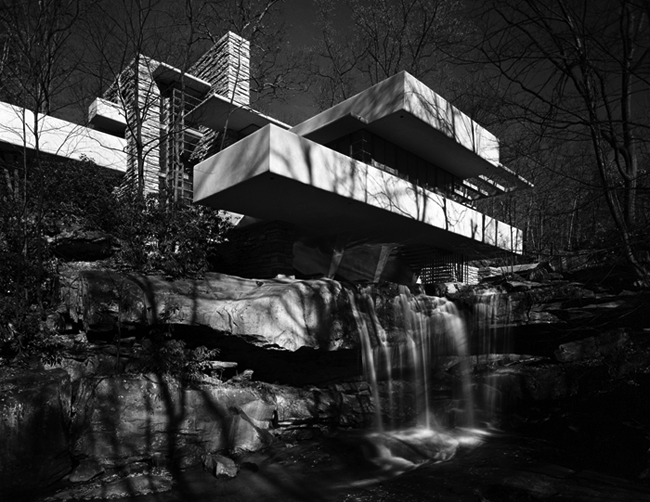 The iconic photo by Bill Hedrick


the mythology
holds that Frank did everything
but that is a myth...

Interesting, thorough, and mostly entertaining book about the conception and construction of Fallingwater, almost certainly the most well-known Modern house on the planet. Toker's goals are to dispel with several myths flowing through Fallingwater, namely (1) that Edgar Kaufmann Jr., the son of the client, Edgar Kaufmann, was critical to the creation of the house; (2) that Wright conjured plans for the house in two hours as Kaufmann was driving up from Chicago; (3) that Wright was a great engineer; and (4) that Fallingwater was instantly acclaimed. And he readily achieves those goals with ample sprinkles of interesting factoids and backstories.

It's said that there can't be good architecture without good clients, and oftentimes a good client is defined by architects (half-jokingly...) as someone who simple signs the checks. However, great clients challenge an architect to bring him or her to greater heights. Kaufmann was a great client in the creation of Fallingwater.

After completing the Robie House in 1909 and publishing the Wasmuth portfolio in 1910, Wright struggled both professionally and creatively. The Robie House represented the peak of his Prairie Style, an American style that failed in being widely adopted by its home country. After abandoning his family and running off with the wife of a client to Europe, Wright found his Chicago clientele scandalized and unwilling to give him commissions. After returning from Europe, Wright experimented with Mayan revivalism in California (again searching for a uniquely American style) and a fussy version of Prairie-style in Japan. After commissions dried up in California and Japan and the Great Depression depressed, Wright found himself without clients and, even worse, the attention of the world focused elsewhere, on the so-called International Style.

Wright was becoming irrelevant, and he knew it. The Europeans, who owed much to him, were now the leaders. After the failure of Mayan revivalism, Wright needed to reinvent himself yet again, but he couldn't risk another failed "transitional period". He needed something that worked. He needed to reach out to the new architecture for inspiration. He needed the International Style. And along came a few commissions, one from Johnson Wax (a commercial project), one from Kaufmann (a luxury house), and one from Jacob (an affordable house), to help him get there.

Kaufmann was an architectural opportunist. Running a department store demanded that he keep his finger on the pulse of styles and trends. He similarly kept the pulse of architectural trends, building structures in Pittsburgh that gained him local and national attention and respect. Given his Jewish-German heritage (and frequent trips to Germany) and contacts in New York, he was well aware of the International Style. Interestingly, he reached out to Wright to build him a home in the country, and he fully intended the house to be cutting edge and attention-grabbing.

Kaufmann tapped Wright at the perfect time. Wright was steaming about the International Stylists, particularly Schindler and Neutra, who he saw as the greatest threats to American architecture. And Wright was looking to be relevant again. Kaufmann was looking forward as well and helped Wright transition into the next phase of his career. As Toker states "...Kaufmann mainstreamed a Wrightian vision that had grown too eccentric for American taste." Fallingwater was a response to the European Modernists who had architecturally outflanked him. In fact, outshining the "International Stylists" was Wright's strongest motivation with the house, and Kaufman's desire to have a Modern house provided the perfect opportunity for him. The latter half of Wright's career was driven by blind jealousy of the success of his contemporaries, especially those that had been closest to him: Schindler and Neutra.

Devote Wrightists continue to believe the fallacy that Wright was influenced by no-one and no thing. However, even Wright (in weak moments?) acknowledged influence in his work. On Modern architecture, Wright wrote "True modern architecture, like classical architecture, has no age. It is a continuation of all the architecture that has gone before, not a break with it." During his Prairie Style phase, Wright was clearly influenced by Louis Sullivan and H.H. Richardson. As Toker notes, later in Wright's career, Wright simply got better at assimilating contemporary work into his own style. In the first part of his career, Wright had little "competition" in advancing architecture. Now that Modernism was leading the world, advancements were coming from all directions. Wright couldn't beat them, so he had to join them. After all, Wright had already compromised his design morals by designing a Bauhausian house (House on the Mesa) in 1931 so he could be in MoMA's 1932 show on modern architecture.

Wright's House on the Mesa, designed to get into MoMA's 1932 show on Modern Architecture.

Ironically, despite his hatred of the Europeans (when swatting flies at Taliesin, Wright would yelp "Got Gropius.... got Mies....got Le Corbusier...."), it's clear that Wright was influenced by the Europeans in this latter phase of his career. Uber-ironically, the Europeans he was influenced by the most were Schindler and Neutra; and Schindler and Neutra were the ones he hated the most. As Toker observes "[Wright's enmity toward the Europeans] bordered on the pathological: the more he copied from them, the more he needed to hate them." 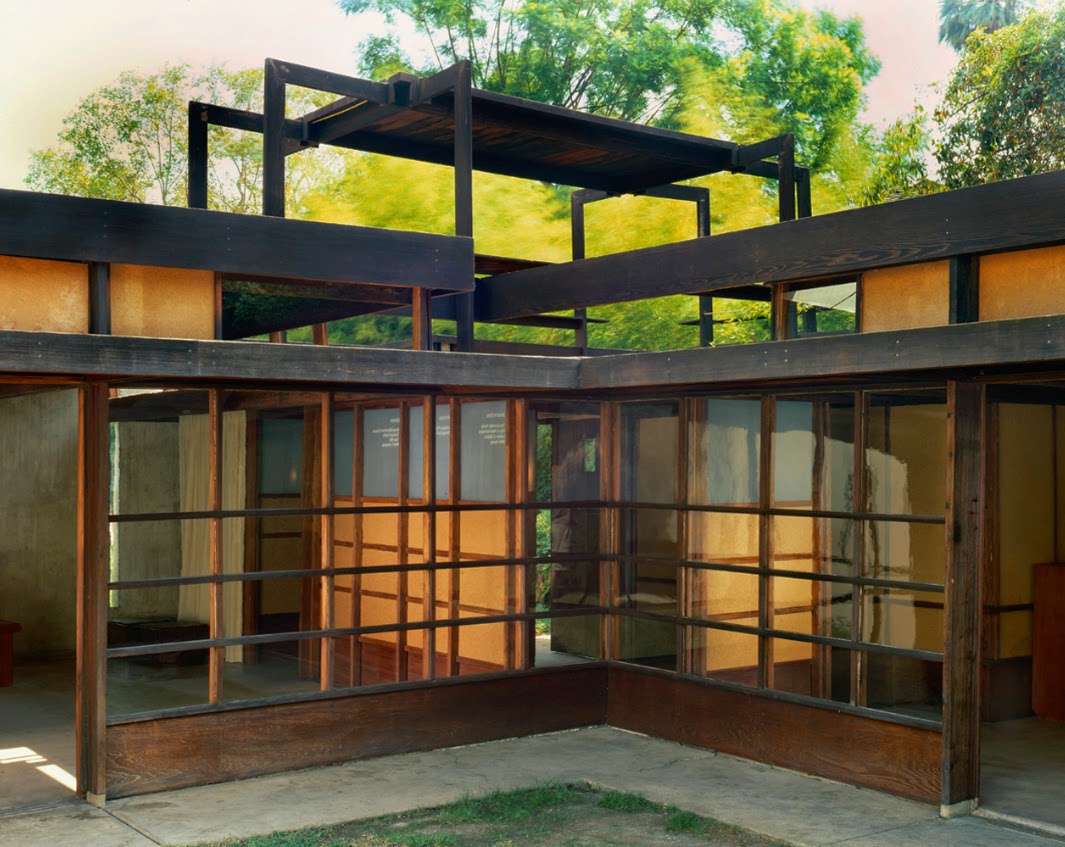 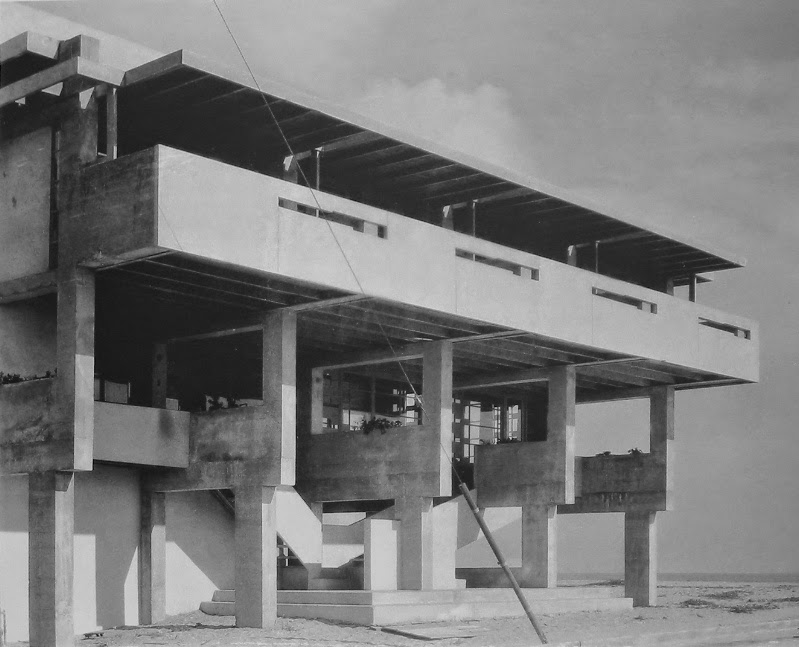 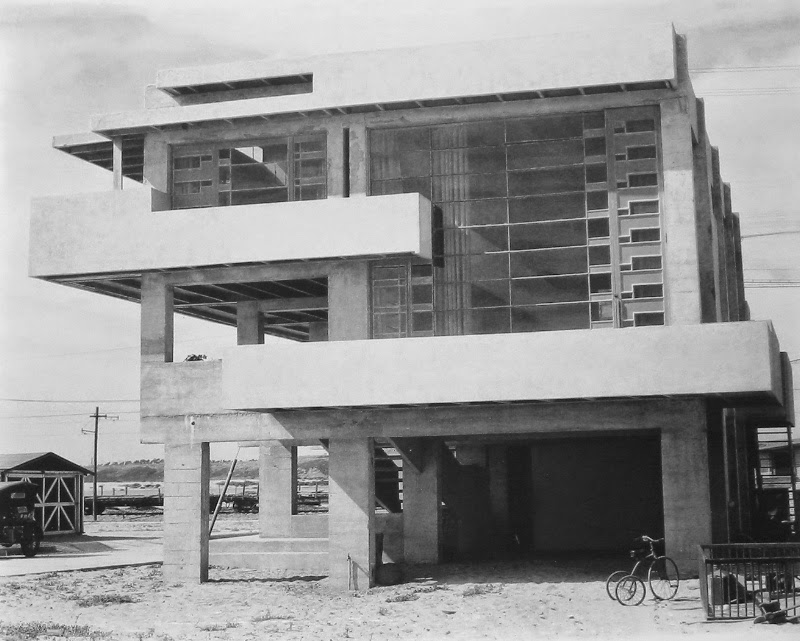 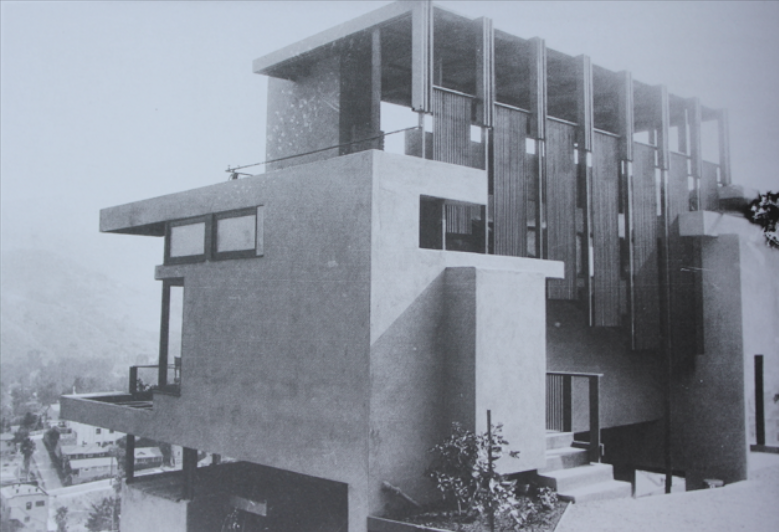 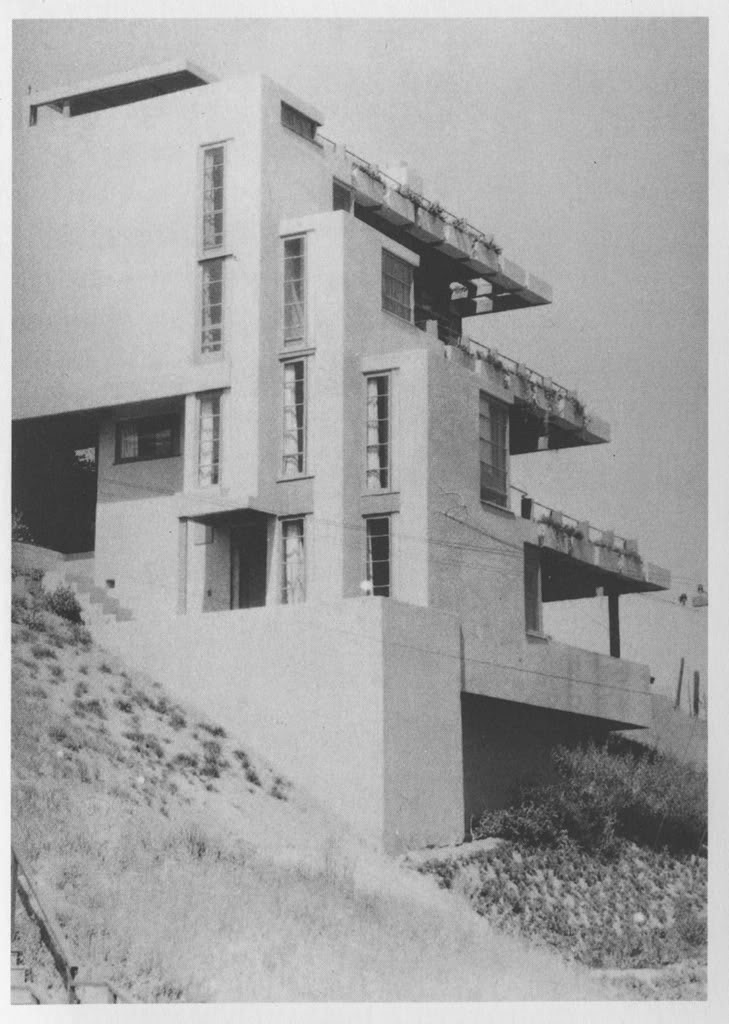 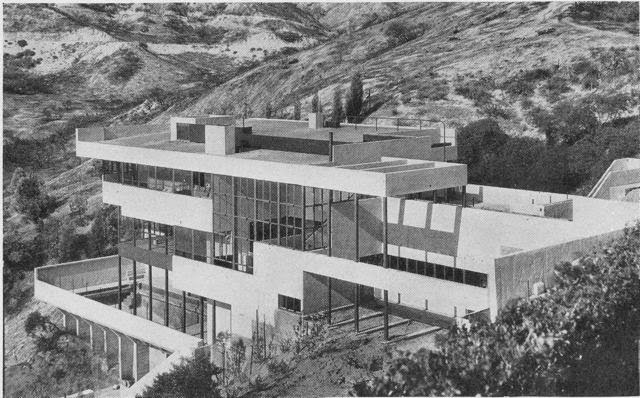 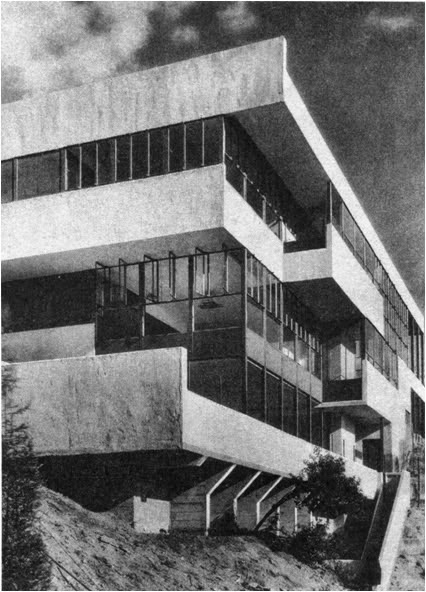 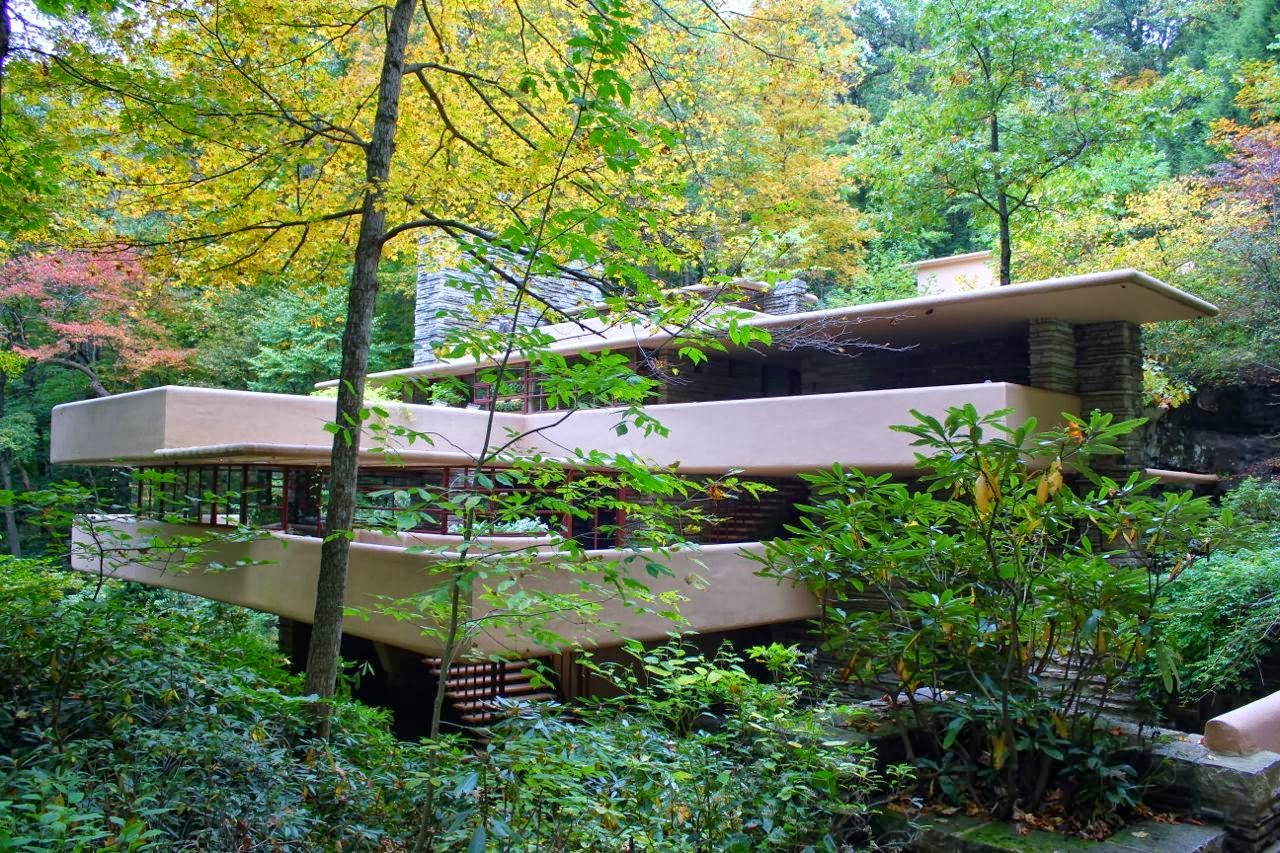 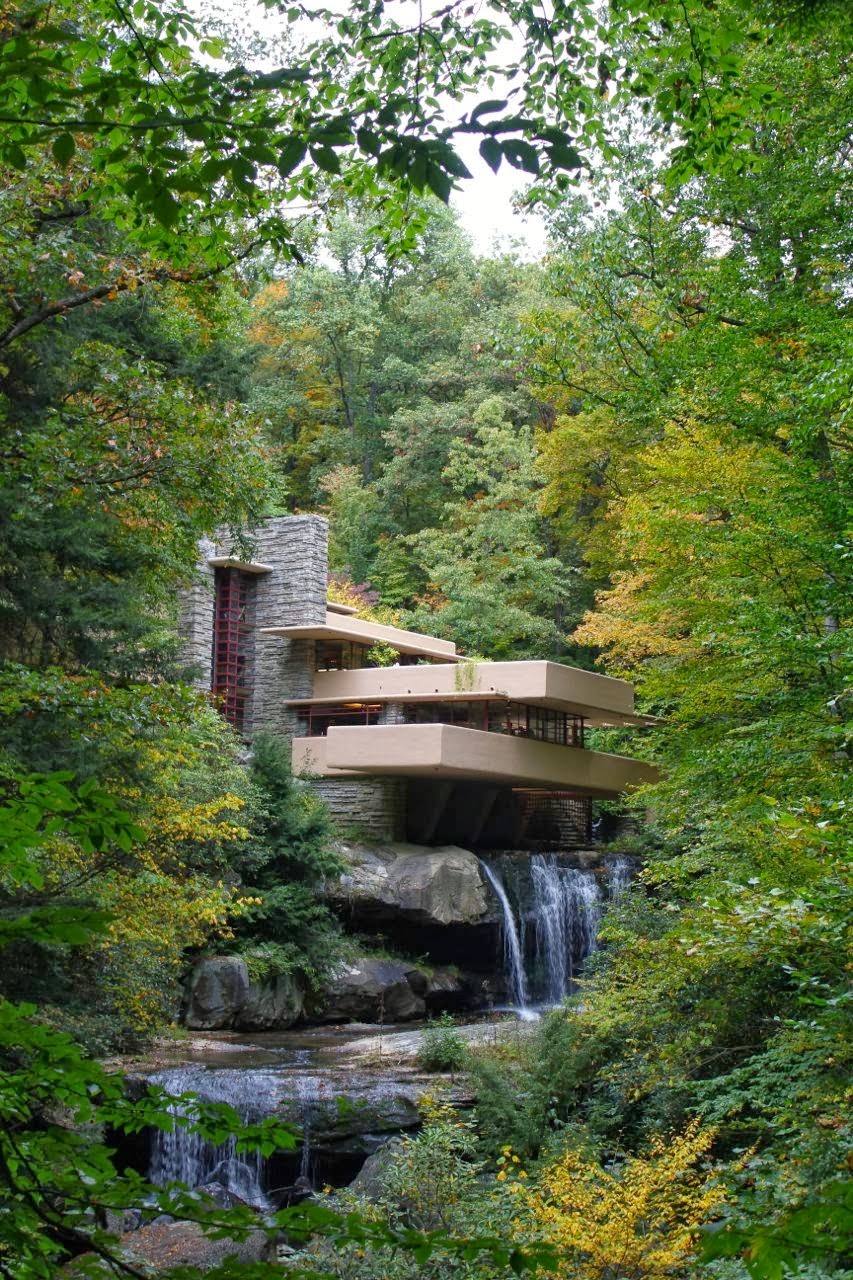 But what Wright borrowed from Schindler and Neutra (and others: there are elements of Corbusier in the design), he arguably did better. The foundation borrowed from Schindler was more elegant and aesthetic; Wright's glass wall wrapped around a corner and included break-the-box windows; Wright removed walls from three sides instead of two; Wright's cantilevers were far more daring than Schindler's and Neutra's. Sure, Wright had a wealthier client (the two most beautiful words to an architect are "unlimited budget"), but it was Wright's expertise and vision that created the poetry of Fallingwater. Covering his tracks, Wright declared in 1957 that the Gale House of 1909 was a progenitor of Fallingwater (and there is some truth to that). But it's nearly impossible to rely on Wright for information. As his editor, Frederick Gutheim, observed: Wright employed a "systematic falsification" of dates and facts. 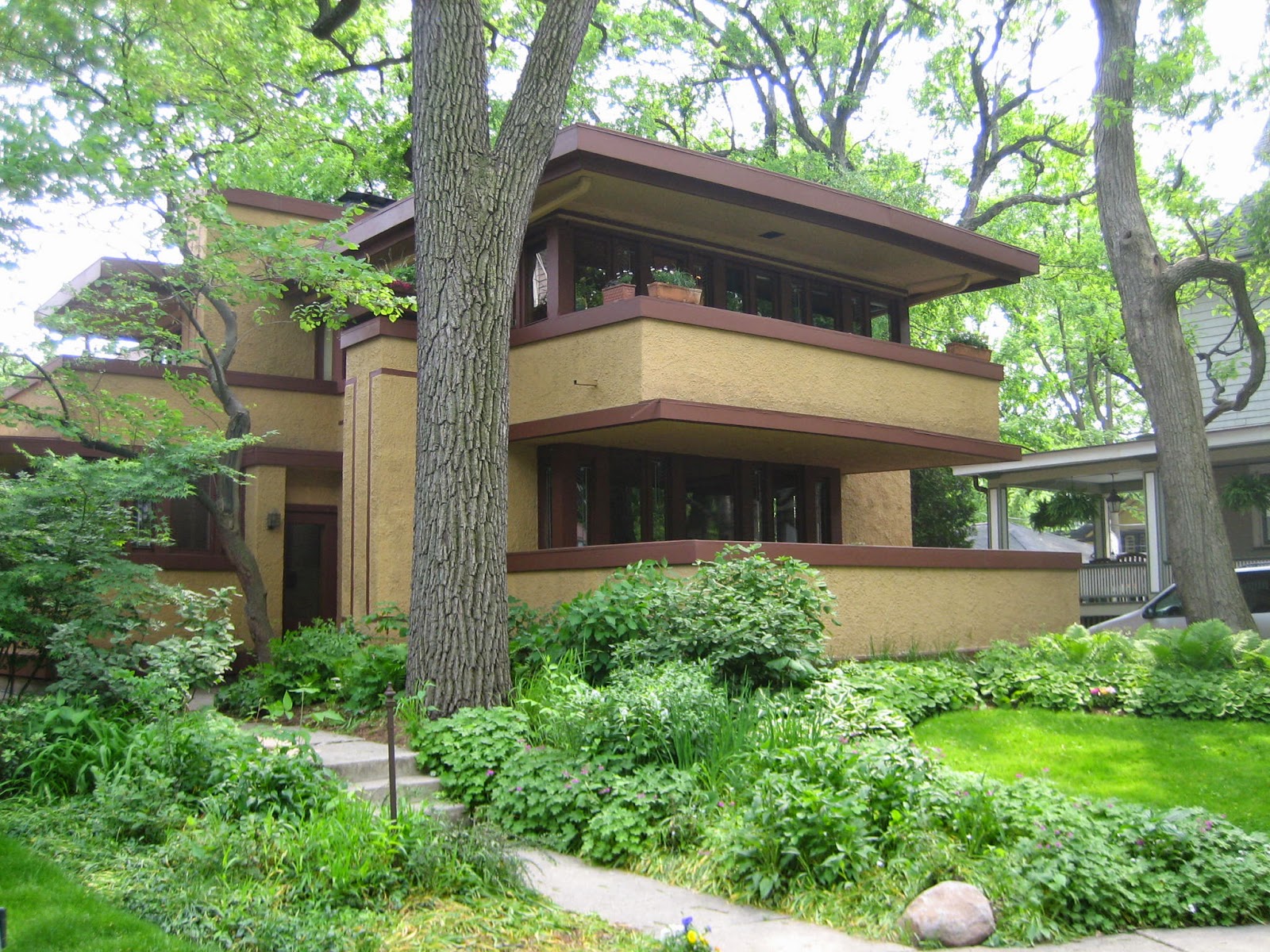 The 1909 Gale House. A progenitor of Fallingwater?

The legend holds that Wright sat down and designed the house in two hours as Kaufmann drove up from Chicago to see the plans of his house. Although absolute facts are hard to come by, Toker does a good job of refuting that myth. The evidence suggests Wright worked in his personal studio for many weeks on concepts and plans and then engineered a revealing of the plan in front of his apprentices (even the recollections of his apprentices disagree with writers choosing the most miraculous recollection). Furthermore, Wright visited the site several times to decide where to place the house (According to his apprentice Cornelia Brierly [Berndtson], on July 3, 1935, Wright pointed to the falls where he intended to place the house and declared "Well, Cornelia, we are going to beat the Internationalists at their own game.") Furthermore, what Wright first presented to Kaufmann wasn't fully developed into what we recognize now as Fallingwater. The iconic top patio, which today cantilevers so memorably over the bottom patio, ended far short of the edge of the bottom patio. Function and practicality dictated that the upper balcony needed to end where Wright originally drew it; form dictated that it needed to reach for the forest and the falls. In this case, Wright chose form over function.

Kaufmann, anxious to get the house built, pushed construction, often using his own employees to work on the house. And Kaufmann, bought into the design of the house, added his design own touches. For example, it was Kaufmann's idea to channel window glass into the rocks (something he repeated in his later Neutra house). And Kaufmann persuaded Wright to leave the boulder protruding from the floor near the fireplace (Wright wanted to chisel it down). Kaufmann also served to temper Wright's more flamboyant tendencies. For example, Wright wanted to sheath the balconies in gold leaf; Kaufmann was concerned about sheathing his house in gold during the Great Depression. Instead, he insisted on (and got) water-proof cement paint.

The success of the house in the press owes a great deal to the iconic photograph of the house from below by Bill Hedrick (shown at the top of this post). Wright was not pleased with the shot: "Very acrobatic, very acrobatic. Did you think I designed this?" But the photo shows the house at its most abstract, most de Stijl, most Modern, and, to borrow Wright's word, most amazingly acrobatic. Kaufmann was a personality associated with his department stores, so he used Fallingwater as a way of generating media attention and appearing "cutting edge" to his customers. He used the media to gain the most attention he could with the house, and even tried to market a Wright-designed house, influenced by Fallingwater, out of his department store.

On Fallingwater's cantilevers, Wright wrote: "The cantilever is the most romantic, most free, of all principles of construction..." It was also the most problematic element of the house. Due to an almost fatal combination of poor design and poor construction, the cantilevers sagged appreciably, so much so that the house almost collapsed several times. Recent restorations have shored up the overhanging patios to stop the sagging. 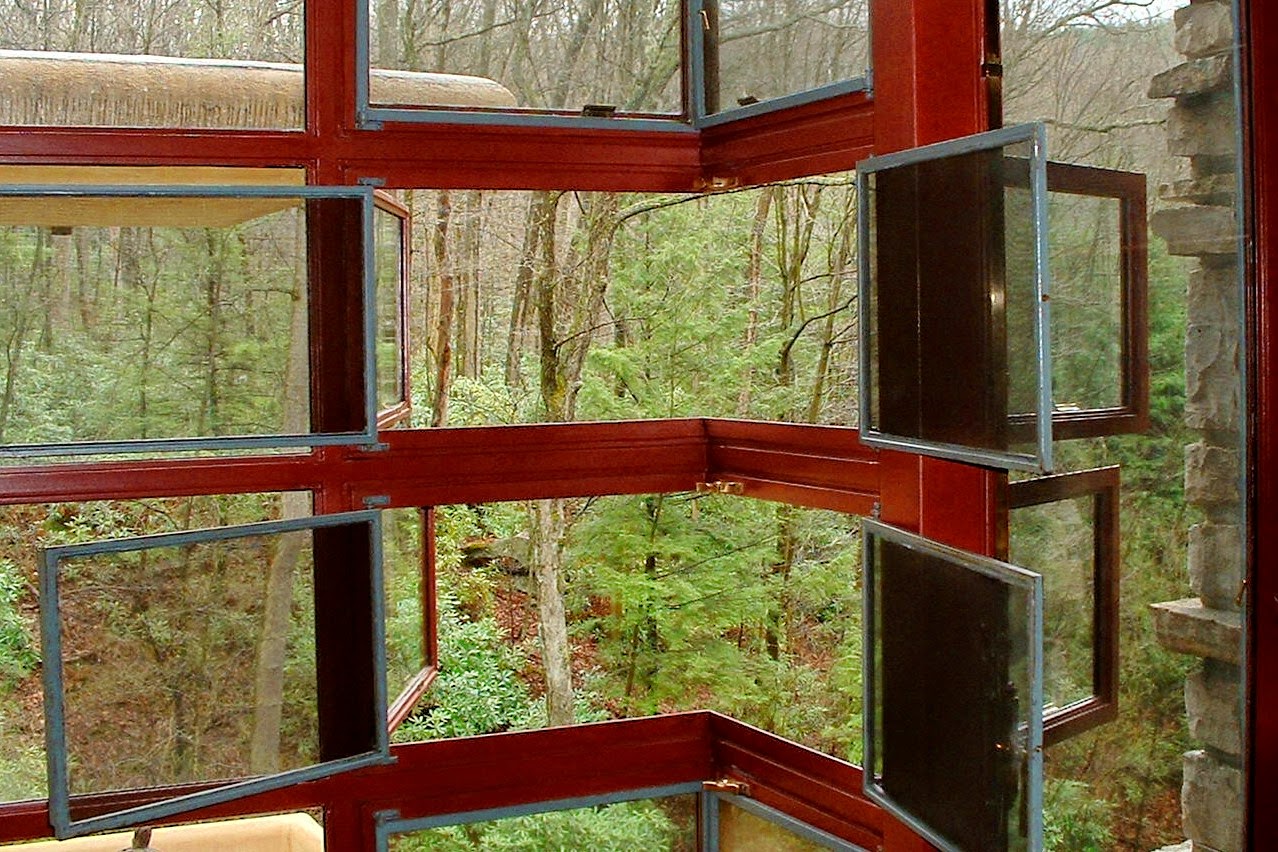 The story of Kaufmann Jr. is interesting in that he seems to have tried to erase the influence of his father on the design and construction of the house, claiming to have created the link between his father and Wright (Jr. briefly attended Wright's architecture school) and to have been present at key moments when that was geographically impossible. Unquestionably Jr. was key in maintaining the house and seeing that it fell into the public's hands, but oddly, especially for a historian, he was not keen on participating in revealing the truth of how the house came to be.

Given his (unjustified) hatred of Neutra (Nuetra had the gall to design buildings that got media attention), Wright was stunned when Kaufmann Sr. later hired Neutra to build a house in Palm Springs, California. Wright wrote "Henceforth you will never, as a Patron of the Arts, be in a position to help me with one hand and hurt me with the other, because I shall never trust my work to you again." 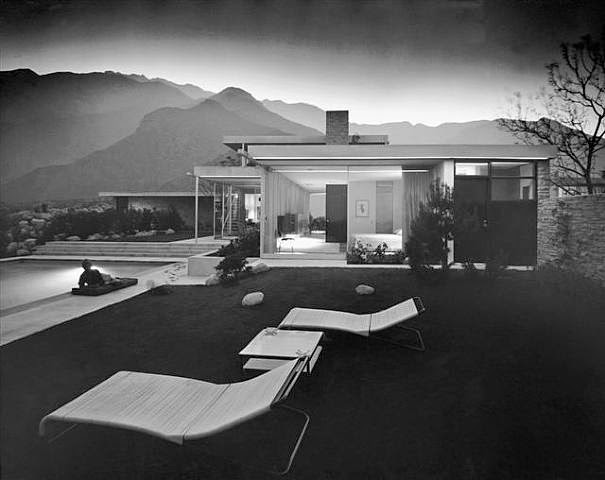 They did work together again (Wright threw a lot of temper tantrums...) on various unrealized projects. And Wright attempted to "right the wrong" of the Neutra house by designing a house, the Boulder House, immediately next door for Kaufmann's wife, Liliane. Wright and Kaufmann had a tumultuous relationship, but tellingly Wright was at Kaufmann's side when Kaufmann died. Wright owed a lot to Kaufmann. Without Kaufmann, Wright might not have ever been relevant again. 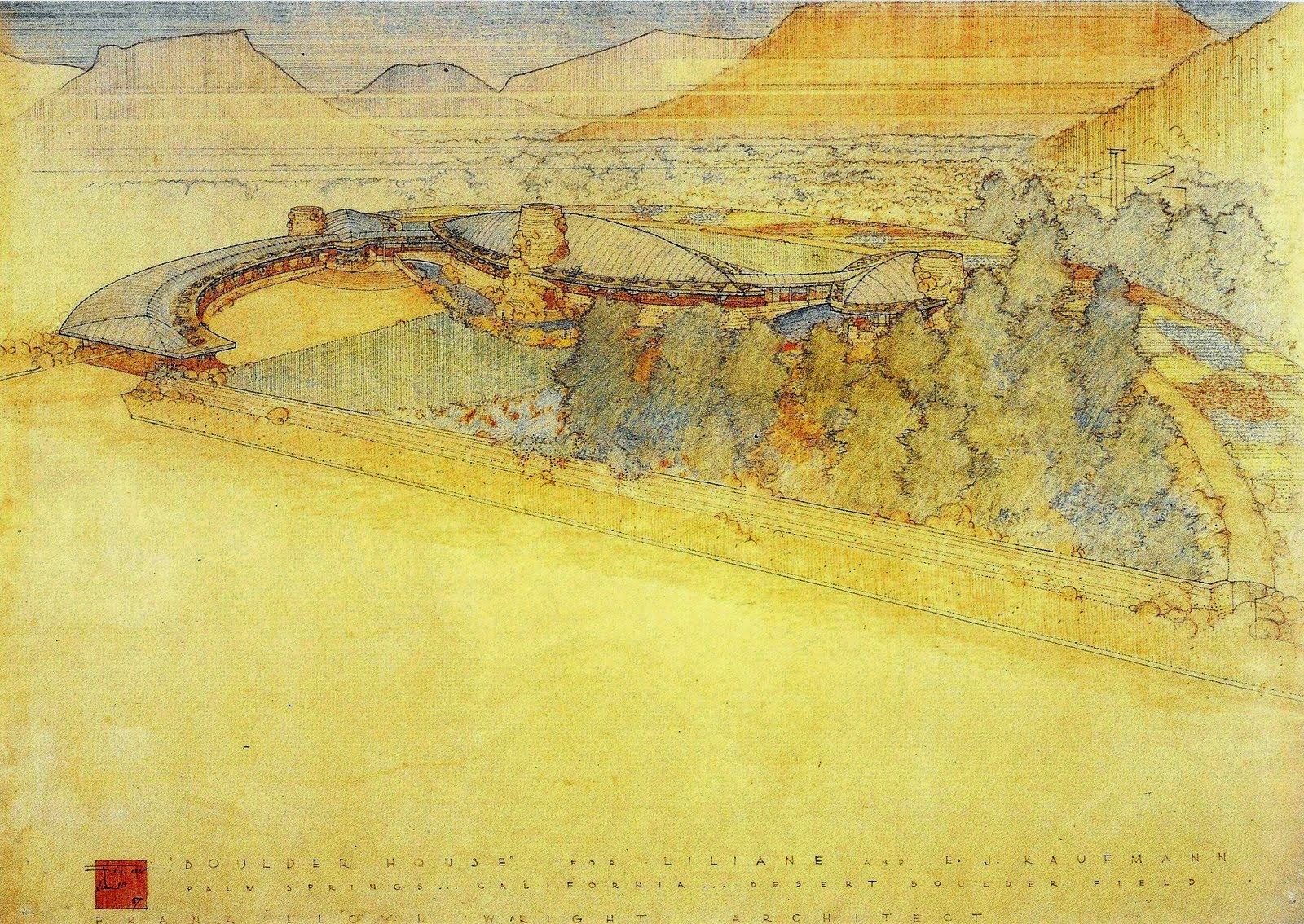 There are some early stumbles in the book that had me wondering about the reliability of the scholarship. Toker attributes the book Wie Baut Amerika to Erich Mendelsohn when it should be Richard Neutra (a Freudian slip since Neutra worked with Mendelsohn?). Later, there's a ridiculous attempt to tie Ayn Rand's Fountainhead with Wright and Fallingwater by pointing out that the two names refer to water, start with the letter "F", and share the same number of letters (in reality Ayn's Howard Roark character represents an amalgam of modern architects). And some of the background information gets tiresome in its detail. Nevertheless, this is the best book about a single structure I've ever read.
Posted by bubba of the bubbles at 10:56 AM