The Austin Modern Home Tour was yesterday, and it was a hoot having our house on the tour! We decided to stay at the house all day, and I'm glad we did. We met a herd of nice people interested in modern and also met several nice folks that read the blog. Plus, it was good to be there to explain certain features and tell a few war stories. And it's always fun to hang out with the architects from Element 5 Architecture as well as the Swanx lady.

Our house was one of several that one could pick up tickets at (probably because we were the northernmost house on the tour), so folks were lining up well before the 11 am opening. 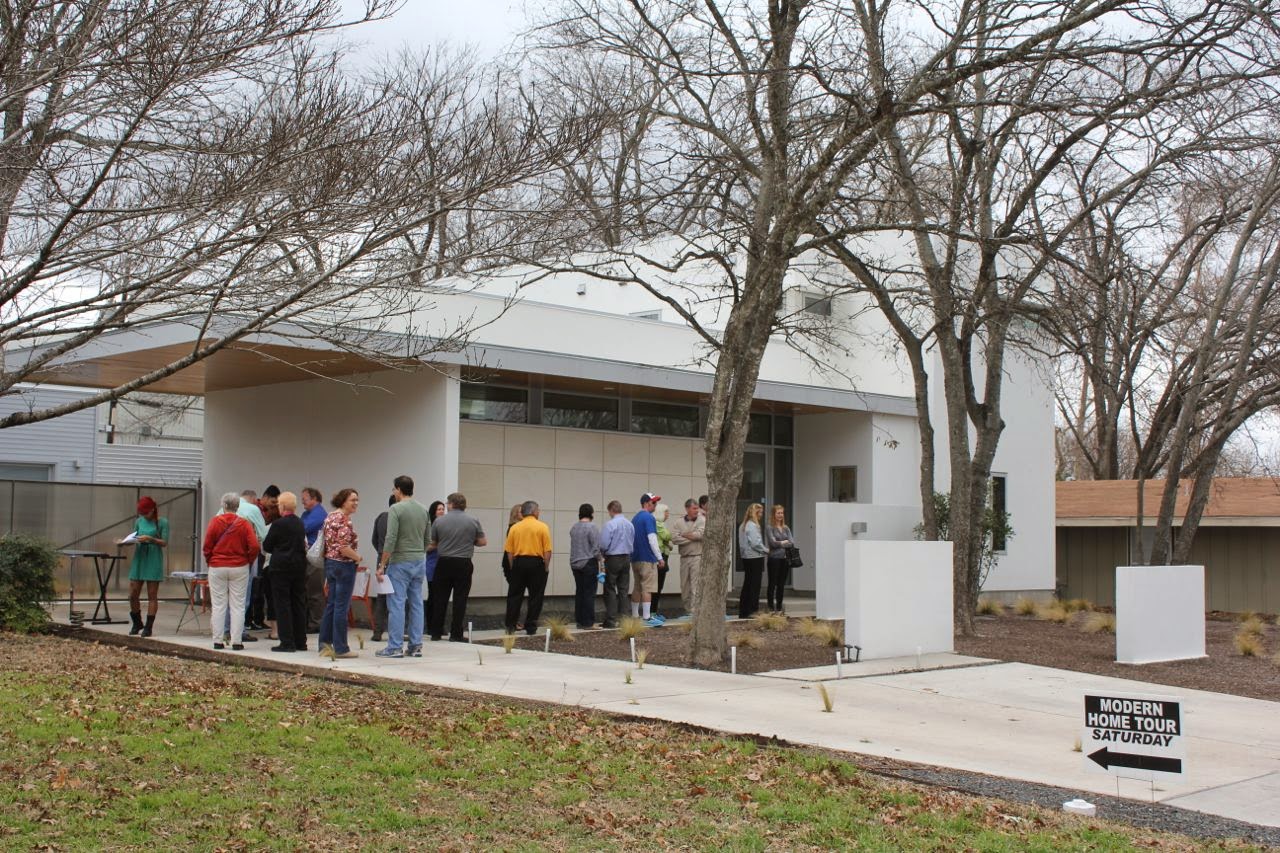 Lining up to see the house! 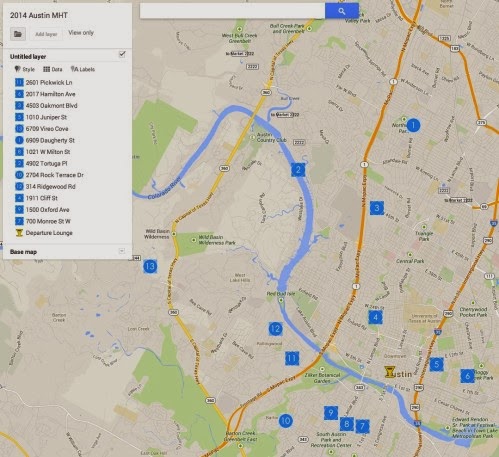 That's us way up northeast. Come to think of it, there's not much Modern north of here...

We didn't count how many people came through the tour, but Michele, the Swanx lady, estimated 1,500 to 2,000 people walked through the house (!!!). Last year the tour had 2,500 signed up, so that's indeed possible. Given that we're an outlier, we probably saw less traffic than the more central homes. There were only a few five-minute lulls during the day, otherwise the house was full of folks. For the most part the weather cooperated. There was a light rain early in the morning and a light sprinkle mid-afternoon.

As a friend noted, it takes a "special kind of person to allow thousands of strangers to tromp through your house". It's not for everyone cause there's always a handful doing stuff they shouldn't be doing (using the restrooms, peeking in drawers, pulling books off the bookshelf), but all-in-all most everyone was well behaved. The only casualty was the wall in the stairwell, which will need to be repainted (but we were expecting scuffs and whatnot in the stairwell, so no problem).

Big hits, based on the number of questions and comments we heard, were the LEGOhaus, which we set out on the kitchen counter. Lots of people really liked the LEGOhaus, especially kids that came through with their parents (and dads that never grew up). 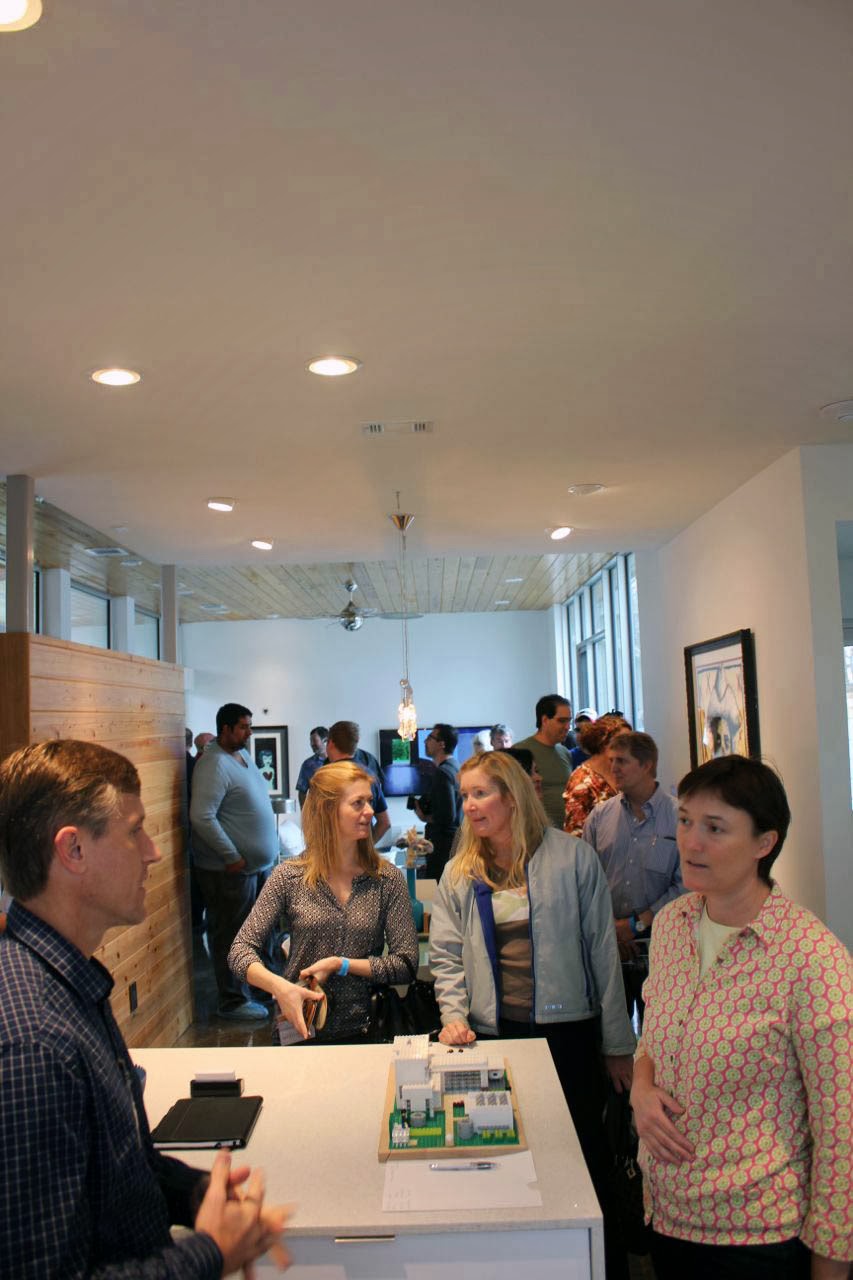 LEGOhaus on the counter (plus the horde!)

I pulled one of the Isettas out onto the driveway to (1) show off the car, (2) indicate the purpose of the garage, and (3) demonstrate that the grass was drivable (a lot of skepticism was expressed about the drivability of the grassy driveway; lots of raised eyebrows that said "Do you really believe that?"). 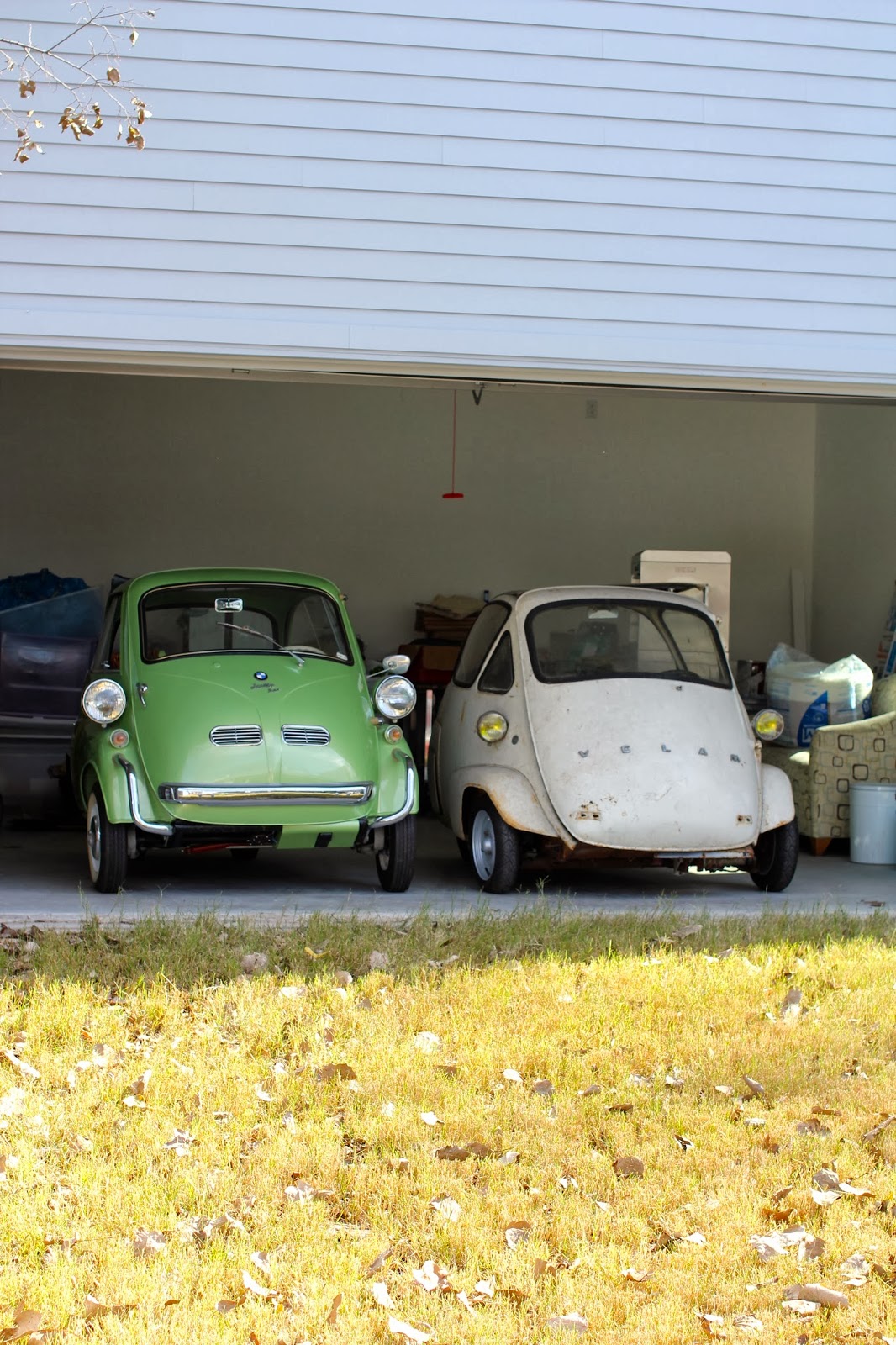 I pulled the green one out onto the grassy knoll. 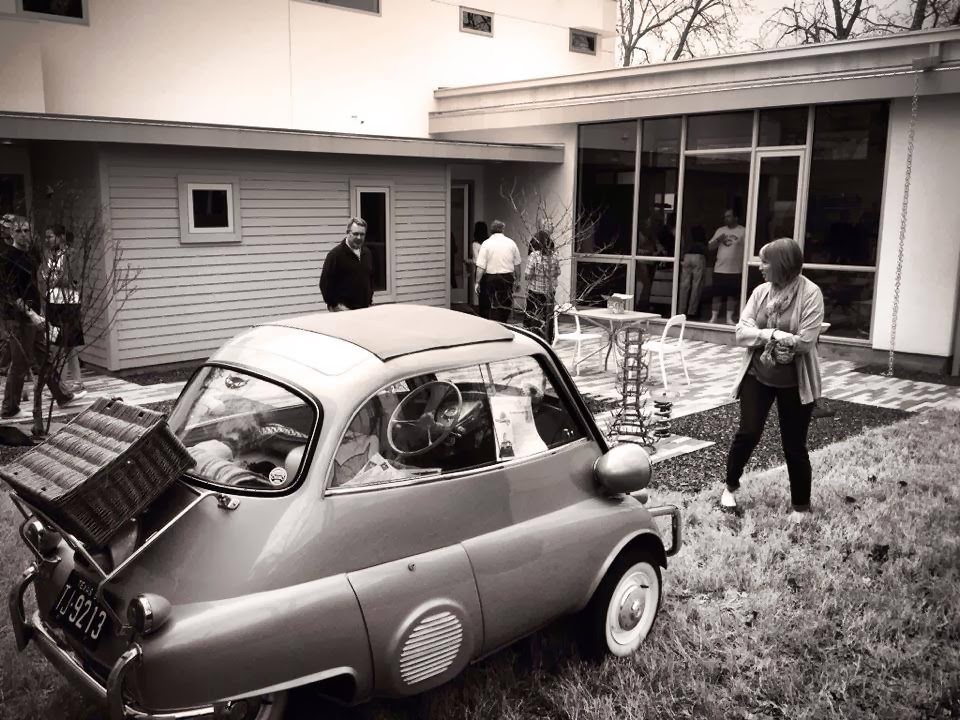 A photo the good folks at the home tour posted on their Facebook page!

The grass in front of the garage caused a lot of confusion on what exactly the garage was. Guest house? Studio? Nope: garage (or, as one person called it: "toy barn").

The artwork (and our decorating in general) got a lot of attention and compliments (some of it real intense). We got a lot of kudos that the house wasn't professionally staged and was well decorated by "real people". A common comment was that the art and decorating made the house feel "warm" and lived in. Several of the houses on the tour were vacant and for sale, so some of the local furniture/decorating stores stage the houses with their wares for the tour. Neat stuff, but hard for them to reach the level of "It looks like someone really lives here." And sometimes the dogma of professional decorating and staging leaves out the "surprises" that rank amateurs like us stumble into (there's a lot of trial and error in what we do...). 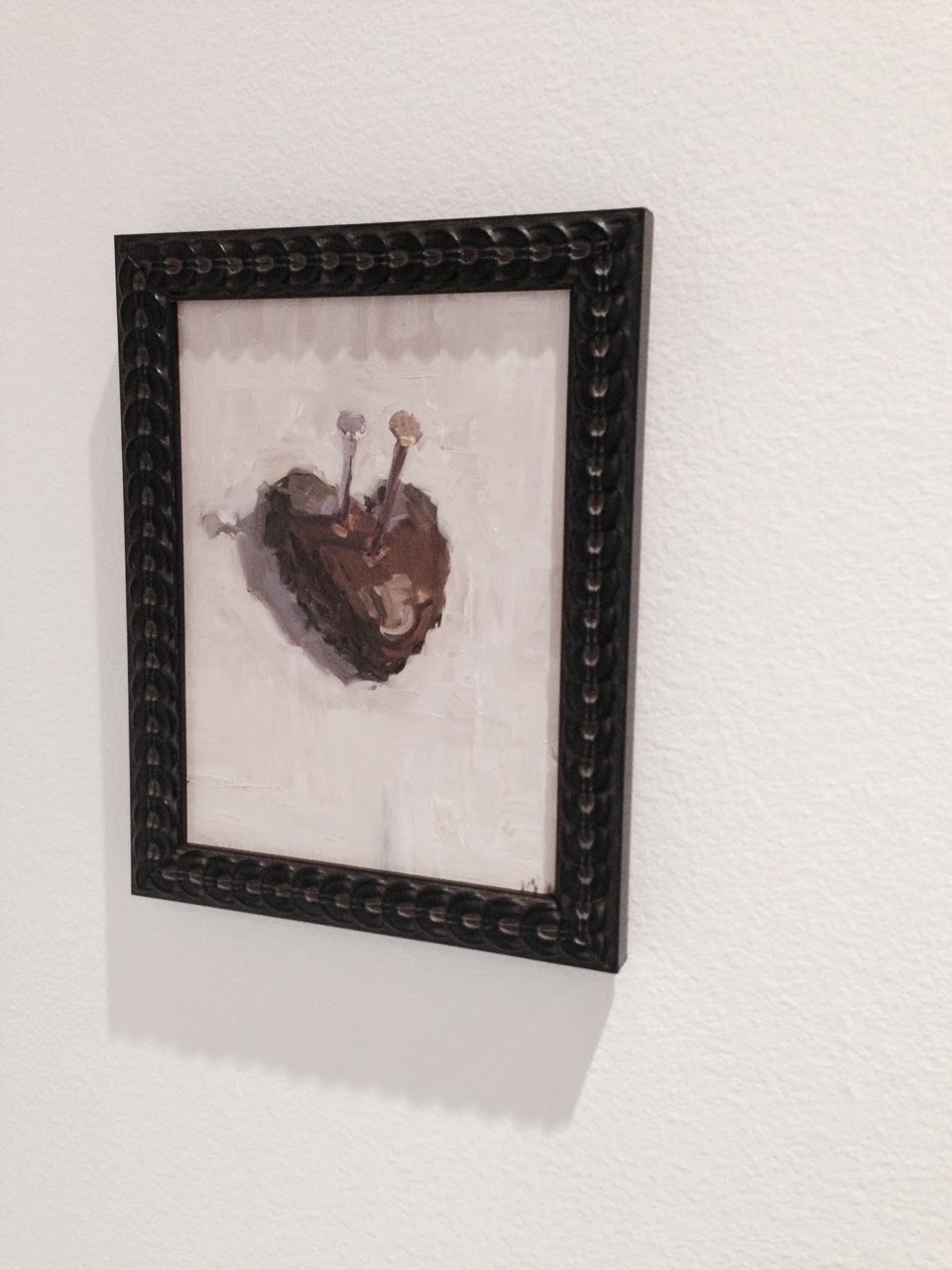 The Adorne plugs and switches got a lot of love (and surprise that you could get them at Lowes!). There were squeals of glee on popping out the "hidden" plugs. 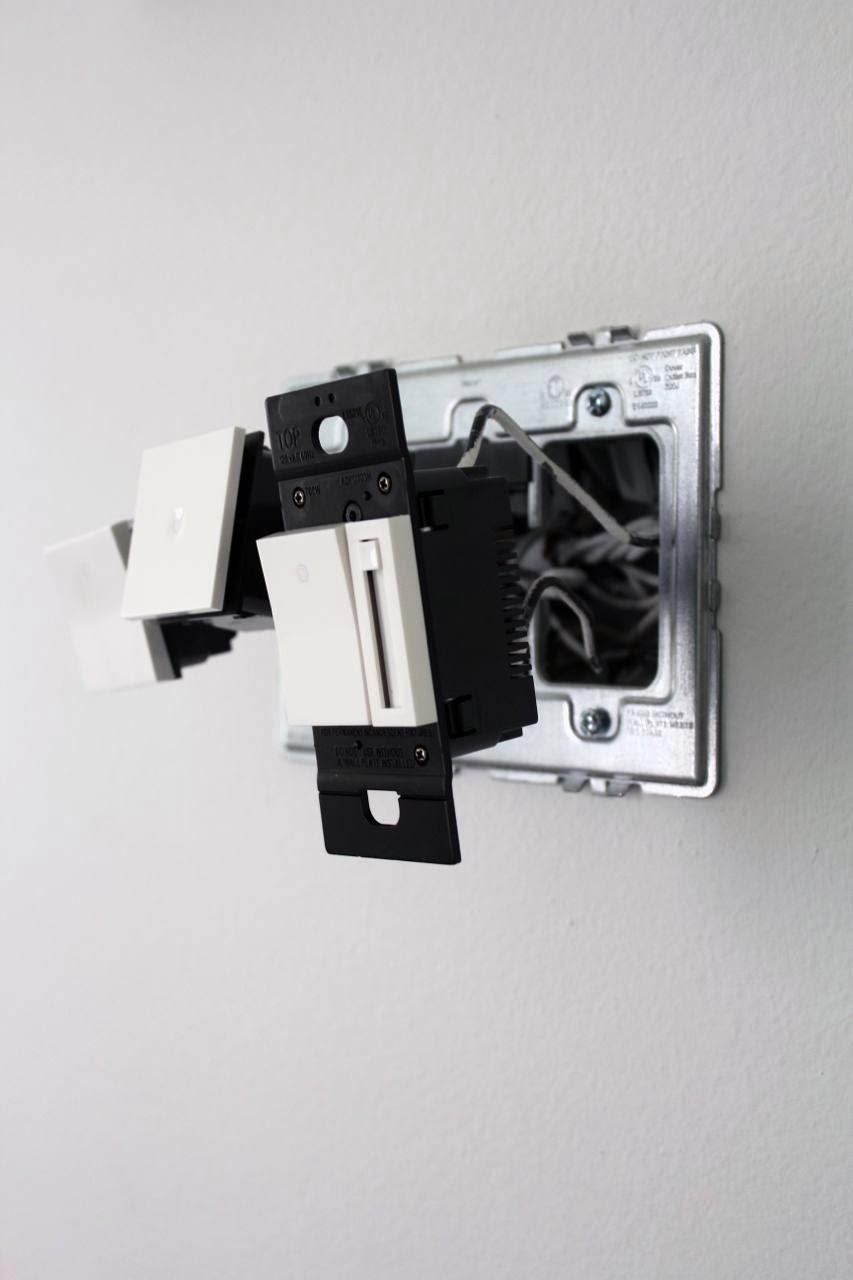 Switch in the process of being Adorne'd last weekend.

Other items of great interest were the foot faucet, the tub spout in the ceiling ("Why would you do that?"), the mixture of low-end (IKEA) and high-end (Graff, Danze) fixtures, the Donald Judd picnic table, and the buds-n-suds room. The kitchen (and the associated cabinets and fixtures) got a lot of attention as well as did the cabinets elsewhere in the house. The scale of the house also got a lot of compliments. It's not too big (and I suspect a lot of folks could actually see themselves affording to live here and thus living here). 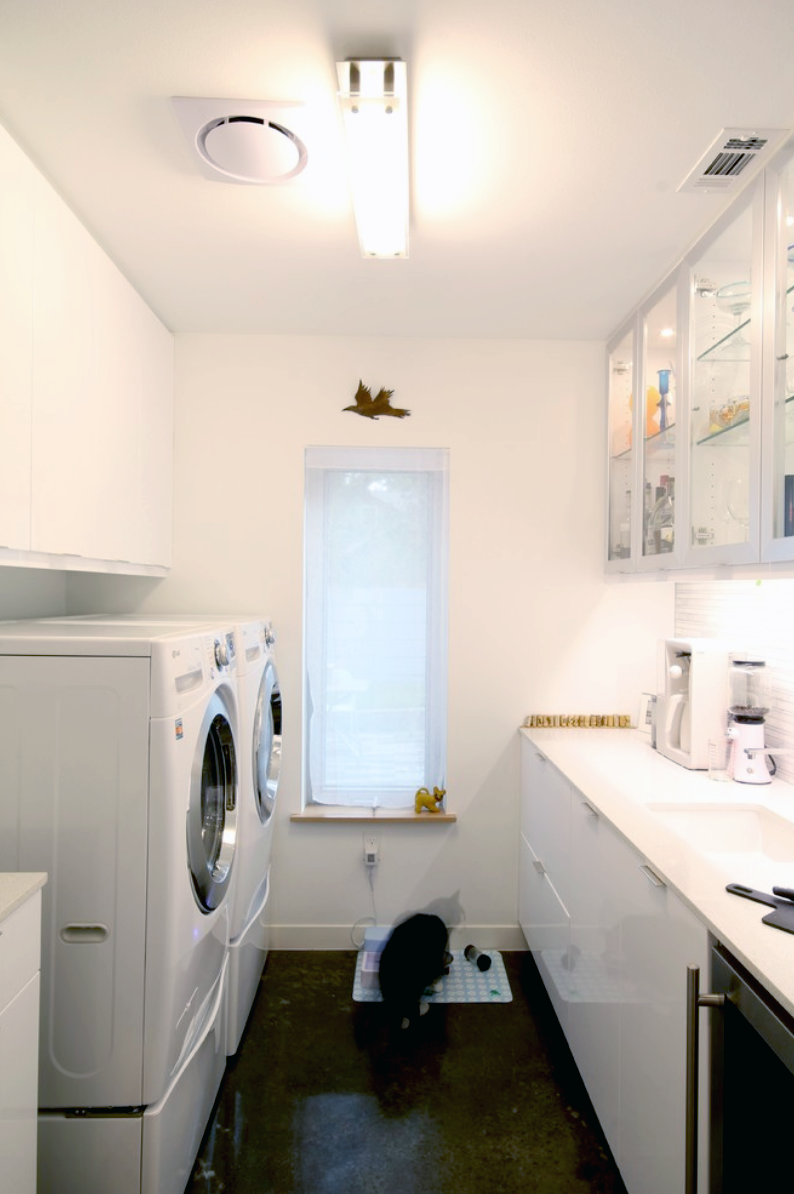 
We put the kitty cat in the garage with a heating pad (which he seemed to enjoy) and other accouterment and then had a scare later when we accidentally left him outside after leaving the house in search of post-tour therapeutic Mexican martinis. Fortunately, the cat came back! 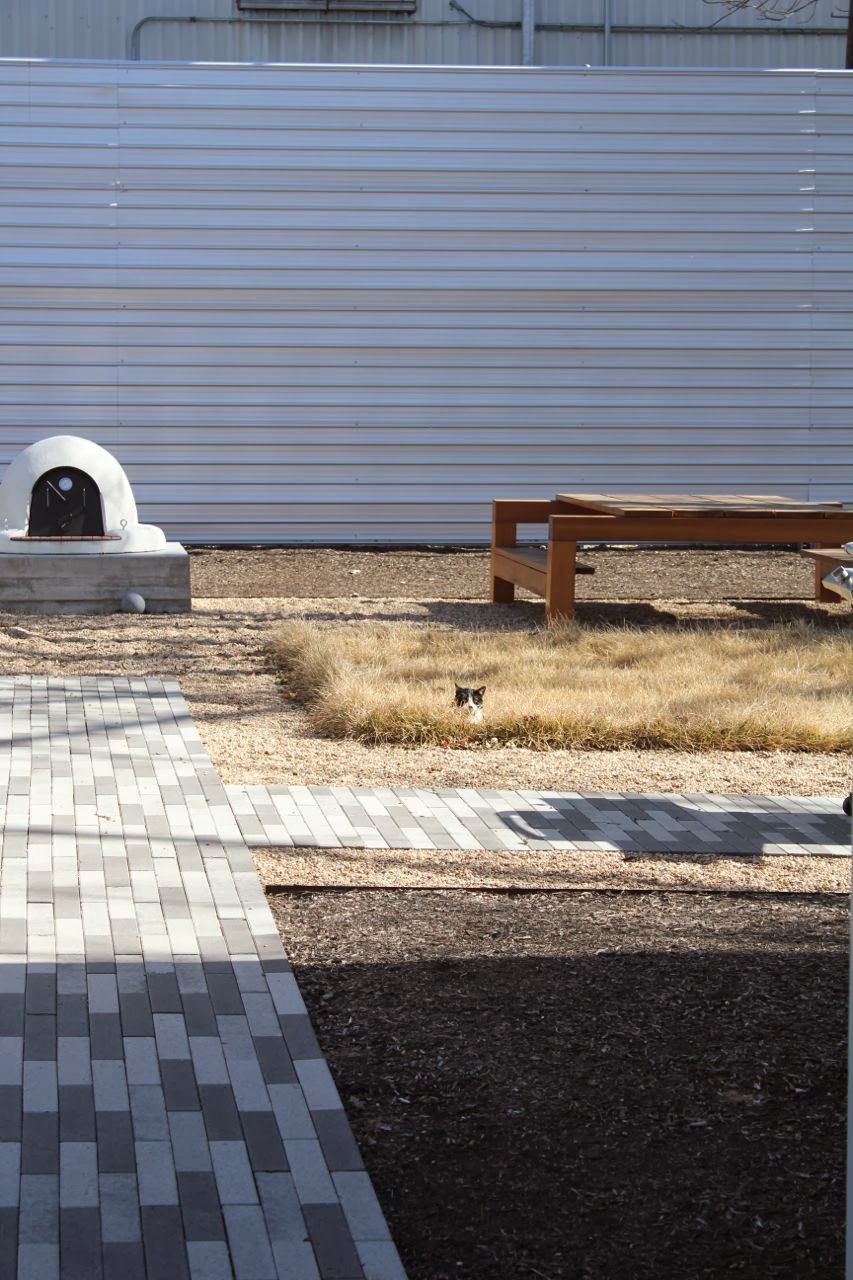 Serengeti kitty hiding in the plains. 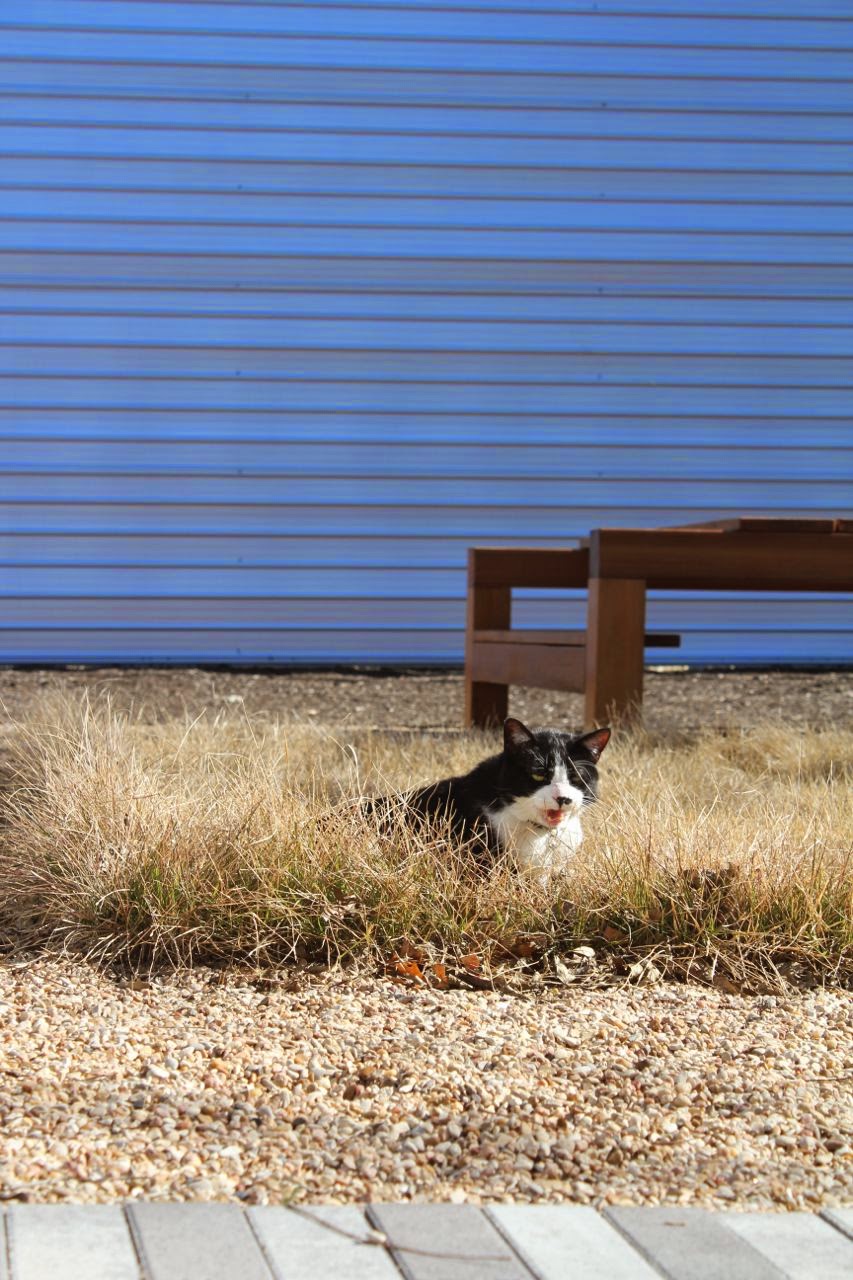 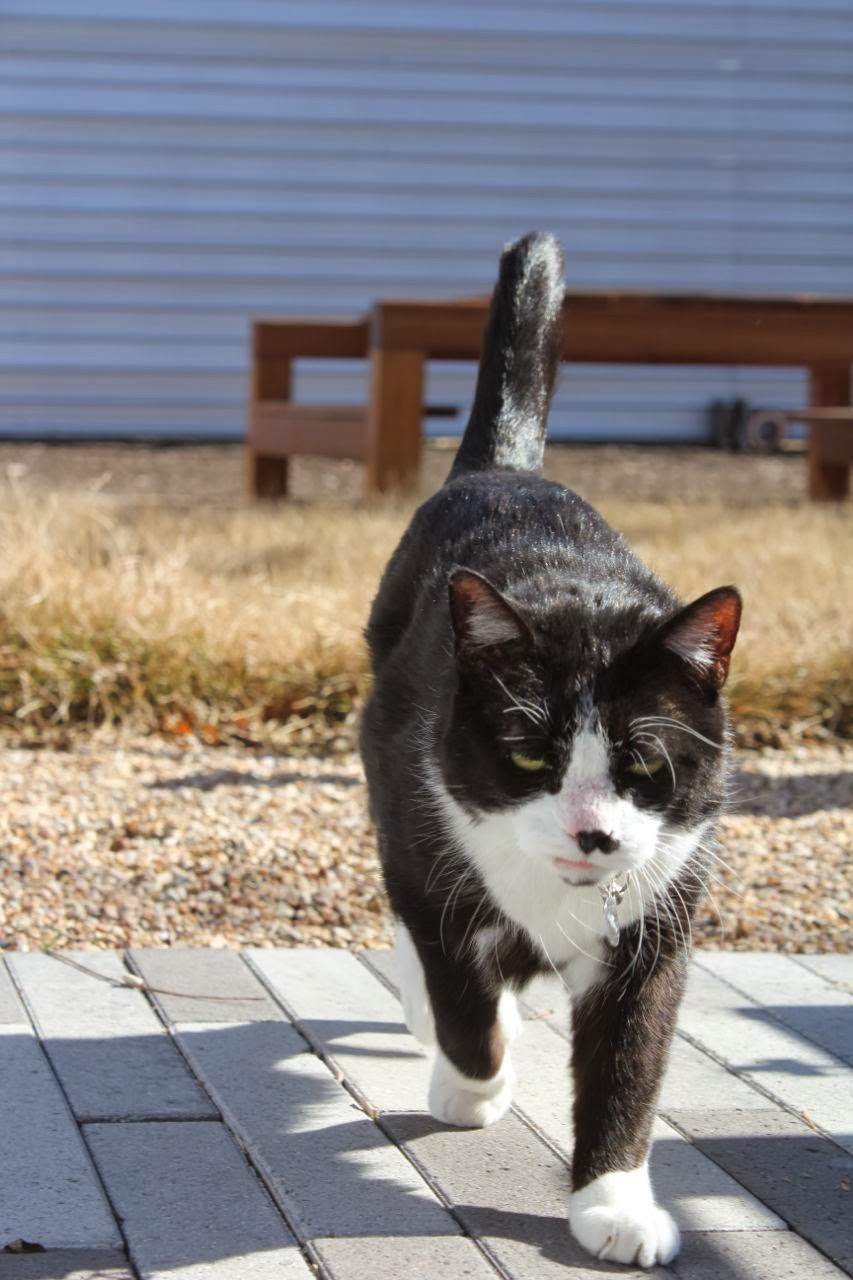 I didn't hear any negative comments (except for the raised eyebrows concerning the grassy drive), which is not surprising since people 'round here are generally polite to your face. Our "spies" heard a disparaging sigh of "white on white on white..." (to each his own) and a couple of older ladies who felt the house was too cold (temp-wise): "They clearly don't want people to stay. It's too chilly in here!" (Yesterday was a strange weather day for controlling temps...). One lady approached the kitchen, covered her eyes, and stomped off while hooting "Too busy! Too busy! I'm not going in there!"

A number of folks said our house was their fave. One fellow, who saw our house first and then came back to share his assessment, said his fave was a toss-up between our house and the lake house. He was told the budget for the lake house was $800 a square foot. Yikes!!! 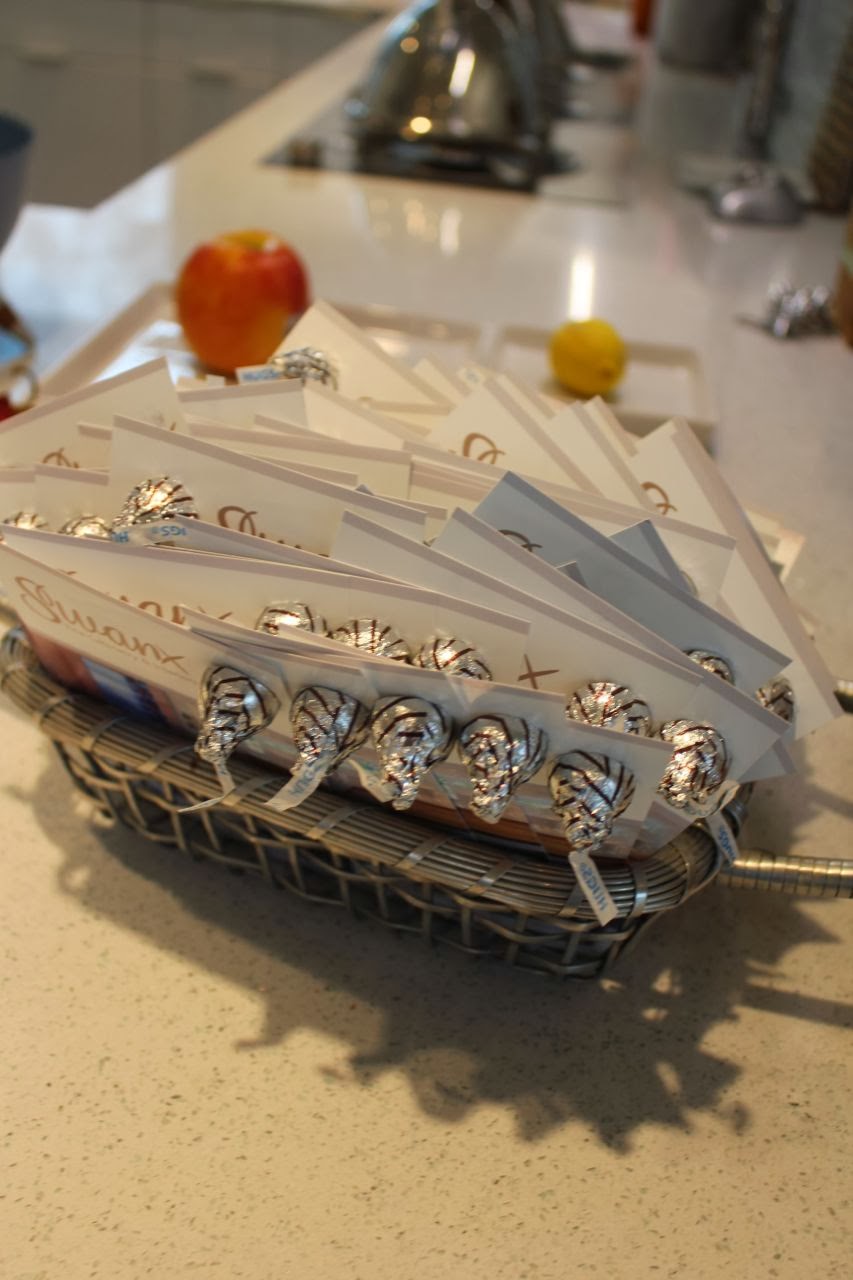 The Modern Home Tour has been our favorite home tour in Austin for many years. The range of houses at various price points (some reachable for us) was helpful as we developed our plans, and the ability to take photos inside and out has always been great fun. Krisstina Wise is the creator of the tour (based on a newspaper article, I had given someone else credit for creating the tour several years ago, but Krisstina is, indeed, the mother of the Modern Home Tour). I think Krisstina actually stopped by to say hello and thank us for opening up our house (I wish I was better with names...).

Finally, here's an interview with the architects at Element 5 Architecture about our house by Maureen Stevens.

And big  thanks to these bloggers for mentioning our house: