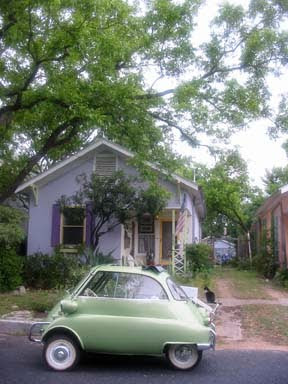 Before we can build, we must sell. And so, fitting in with the grand plan, we’ve started preparing our current abode for the cold cruel market. We’ve lived in this lovely little purple house, built (mostly) in the 1880s, for nearly 20 years. It’s the first (and only) house we’ve ever owned. We bought it, in part, because it reminded us of New Mexico and because of its tall ceilings, huge windows, and overall personality. We were married in the backyard, fer cry eye! So while we’ve been getting ready, the thought has crossed my mind: “What the hell are you doing?” Nonetheless, while there is sadness, there is also excitement for what’s to come.

Pre-bust, we would have (most likely) stayed in this house until a few months out from construction’s end before putting it on the market in an attempt to time the transition such that there would be a single move. However, we live in a post-bust world. To ensure we don’t have to carry notes on two houses (and to apply the equity from the old house to the construction of the new house, greatly increasing our chances of getting a construction loan) we will sell first and build later. In this way we will have some certainty in our budget and won’t have to worry about a double dip recession (something federal and state governments seem intent on causing these days…). And if the house doesn’t sell, we’ll carry the lot until it does, something we are fortunate enough to afford to do.

We’ve often made the observation of how people will suddenly spend bucks to fix up their place before putting it up for sale. “How sad,” we’d say, slowly shaking our heads. And now we find ourselves in the same position. Projects delayed for years are suddenly being finished by a crew we hired to complete a bunch of “punch out” items we feel need to get done before we enter the market. If I had known how (relatively) inexpensively we could have gotten some of this stuff done, we would have done it earlier. Oh well. Our message to you: Do it now and enjoy!

The cosmos must be with us because the local birdcage liner has started a new column about home staging written by the dude, Roger Hazard (who happens to live in Austin), that brought home staging to television. His first column appeared this past Sunday:

In short, declutter, remove religious iconography, superclean your bathrooms and kitchen, let in light, remove any personal photos, get rid of your TV, get SLR photos of your house for the listing, get stuff off the top of your cabinets, and remove half your clothes (from the closet!).

A friend of mine told me that he and his wife hired a professional stager and were able to sell their home in short order after being on the market for awhile (tips from her: make sure you can see your corners; no magnets on the fridge; acceptable art [which means the Tara McPherson print of a young lady fighting an alien squid and a John Hancock original of a two headed, three-breasted woman probably have to go…]). A real estate friend of mine said to beware of over-staging the house. He said that because of cable TV (the aforementioned Mr. Hazard), most buyers are aware of staging and will react negatively to it if it is obvious. Interesting… Nonetheless, we’ve packed up 18 boxes of books (which is not all of them; the new house will have a wall of shelves somewhere) and are working to declutter but not overstage (which is not an issue in our house for various reasons).

The other thing we’ve been doing is contemplating where we will live for about 1.5 years while we design, finance, and build the new house. For several years, intrigued by high-rise living, we considered buying a condo downtown. Five hundred dollars a square foot quickly dissuaded us from those impure thoughts. But one idea is to rent a place downtown and get downtown living out of our system. Fortunately, places downtown don’t rent for what would be needed to pay a note on a $500 a square foot place, so it’s within the financial realm of possibility. Monarch, close to Whole Foods but not too close to the entertainment districts (but walking distance nonetheless), looks very promising.
But first, we must sell. And, hopefully, sell high.
Posted by bubba of the bubbles at 9:53 PM

Email ThisBlogThis!Share to TwitterShare to FacebookShare to Pinterest
Labels: moving