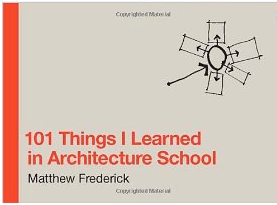 Saw this cute little book at the Austin Museum of Art and, upon seeing terminology that The Architect had used, picked it up. I think it took me all of 30 minutes to read it (which amounts to a value of 50 cents per minute), but it was well worth the read. It’s certainly cheaper than an architecture degree.

My favorite part of the book is the juxtaposition of quotes by Ludwig Mies van der Rohe (”Less is more”) and Robert Venturi (“Less is a bore”). Between the two we lean toward Rohe (and, therefore, desire something closer to a Rohe house…). In fact, my bride loves Ludwig. She swooned over a large photo of him at the top of the (I-refuse-to-call-it-anything-else-than-the) Sears Tower.

Some of the bits are zanily zenny: “We move through negative spaces and dwell in positive spaces.” ”Reality may be engaged subjectively, by which one presumes a oneness with the objects of his concern, or objectively, by which a detachment is presumed.” However, other bits are thoroughly practical: “If you can’t explain your ideas to your grandmother in terms she understands, you don’t know your subject well enough.” As a scientist in the public realm, I give a hearty “Hear! Hear!” to that last bit.
Posted by bubba of the bubbles at 6:43 AM