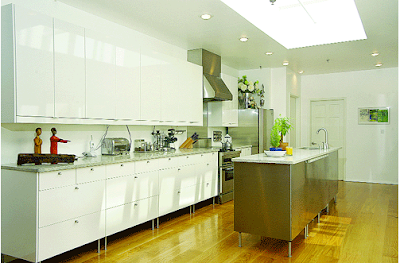 Just as the president must carefully chose his cabinet, so must we. And like the president, we'd prefer a cabinet that is hardy, low maintenance, reliable, flexible. and (ahem) bends to our will. Furthermore, just like the prez, we can't pay the sky for our cabinet. There are limits, governmental and otherwise.

For a modern kitchen, there are many qualified cabinet candidates out there, some domestic, many European. Here's a (I'm sure) partial list:

You can tell that some of these are expensive just by the name (for example, Berloni). And then there's IKEA, the home of (sorta) high design at (amazingly) low prices. IKEA is the Walmart of modern (with Swedish meatballs on top).

Poor little IKEA doesn't get much respect. A pal of mine often (irritatingly...) repeats this joke: How did the founder of IKEA celebrate when he became the richest man in Sweden? He went out and bought some nice furniture!

The meanness of this joke is justified: IKEA sells some crappy furniture. However, IKEA sells some nice stuff as well. We have some of their outdoor plastic chairs, and they are fabulous. And they sell modern cabinets at (amazingly) low prices.

There're fierce debates out there about IKEA cabs (search on "kitchen cabinets" at liveModern.com). On the good side, there's the hardware made by Blum (used by high-end cabinet suppliers), the high rating by Consumer Reports (fourth out of fourteen against domestic competition at a half to a third of the cost of higher ranked cabinets), price, and low-formaldehyde. On the bad side is being stuck with standard sizes, "some assembly required", and the view that IKEA is low-rent. Some opinions vary in dizzying ways: “The boxes are great but the doors suck: buy the boxes and get your doors elsewhere” versus “The doors are great but the boxes suck: buy the doors and have someone make you boxes.” In general, cabinetmakers (and cabinetsellers?) hate IKEA.

I recently visited a domestic cabinetmaker that had some pretty nice modern cabinets. I mentioned IKEA, and the salesdude immediately scoffed. "IKEA: Such low quality. If you're building a home over yonder, you want custom cabinets." I noted that the hardware used by this maker of cabinets was the same as IKEA's. So if IKEA is low-rent and you are using the same hardware as IKEA, aren't you low-rent as well? I would have been far more impressed with a soliloquy about why his cabinets were superior to IKEA's rather than an anti-Swedish rant. And for this cabinetmaker, IKEA cabs probably cost a quarter as much.

One person on the interwebs suggested hiring a custom cabinet builder who is willing to work with IKEA cabinets to get the best of both worlds. For example, the IKEA kickplates land/or legs look cheap and cheesy to me. A custom cabinetmaker could upgrade those. You could also buy higher grade pulls if need be (and maybe float the cabinets in the bathroom?).

We like the built-in look, but we're not sure that can be done with IKEA. So maybe we can mix and match: A little IKEA and a little custom, assuming it all works together. We’ll find out soon enough… The prez was able to do it, and so shall we…

(photo from here: http://www.downtownexpress.com/de_100/picturesqueskylights.html; IKEA cabs in a $2.1 million NYC loft!)
Posted by bubba of the bubbles at 9:02 PM

Email ThisBlogThis!Share to TwitterShare to FacebookShare to Pinterest
Labels: kitchen