if the house don't fit, you must acquit 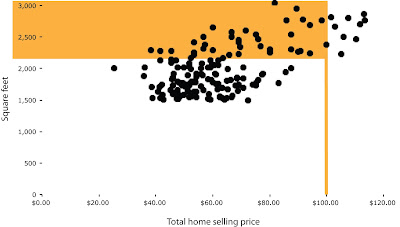 Since we were looking to do a 2,500 square-foot home at a cost of b$100 (see http://austincubed.blogspot.com/2011/01/thats-bunch-of-b.html for an explanation of what b$ means), we generated this graph to see how our planned budget compares to recently sold homes in the hood (click on it to make it larger if you need to). As it turns out, our goals fit quite well with the data (and the neighborhood).

First, take a look at the horizontal axis. Setting aside the outlier at b$25 (that house must have been full of dead raccoons when it sold…), home sales have ranged in price from about b$35 to b$115. That’s quite a range, but the good news is that if we stick to budget, we haven’t built the most expensive house in the neighborhood. Developer rule no. 1 is to never build the most expensive house in the hood. That’s doubly important for us because our lot is not perfectly located.

Now take a gander at the vertical axis. The square footage of these homes ranged from 1,500 to a little over 3,000. Our initial goal of 2,500 (the house has crept to just north of 2,900 now…) fits in as well.
Each black dot represents a house of a certain square footage that sold at a certain price. You may notice that although there is a mosquito swarm of dots, the whole batch of them tends to slope upwards to the right. That’s to be expected: Larger houses tend to go for larger prices. However, there’s a great deal of spread among these dots. For example, houses that have about 1,500 square feet sold for between b$40 to b$75. This is probably a reflection of whether or not the house had been updated (most of these homes were built in the 1950s) and where the house was in the neighborhood. A crappy house next to the creek is probably comparable in price to a moderately updated house in the interior of the neighborhood.

I’ve drawn a vertical line on the graph up from our price point (b$100) and see that houses at that price point generally have 2,250 to 3,000 square feet. That’s in our ballpark. Say, for example, we were insistent on building a 1,500 square foot home at that price point. You can see that we would be way outside (35% higher) the going price for a similarly sized home. In that case, it could be a struggle to sell that house if we needed to.

The other thing to consider is how much you spent on the lot relative to your overall budget. We spent about b$28 on the lot. That gives us b$72 to spend on building the house. Banks generally want to see you spend two to three times the lot cost building the house. We’re at 2.6 with this lot. If you’re building out in the boonies, your lot cost is probably a lot lower than this and this two to three times rule doesn’t apply. But if you’re building in town, it seems to be a good rule of (hammered) thumb.
Posted by bubba of the bubbles at 7:37 PM